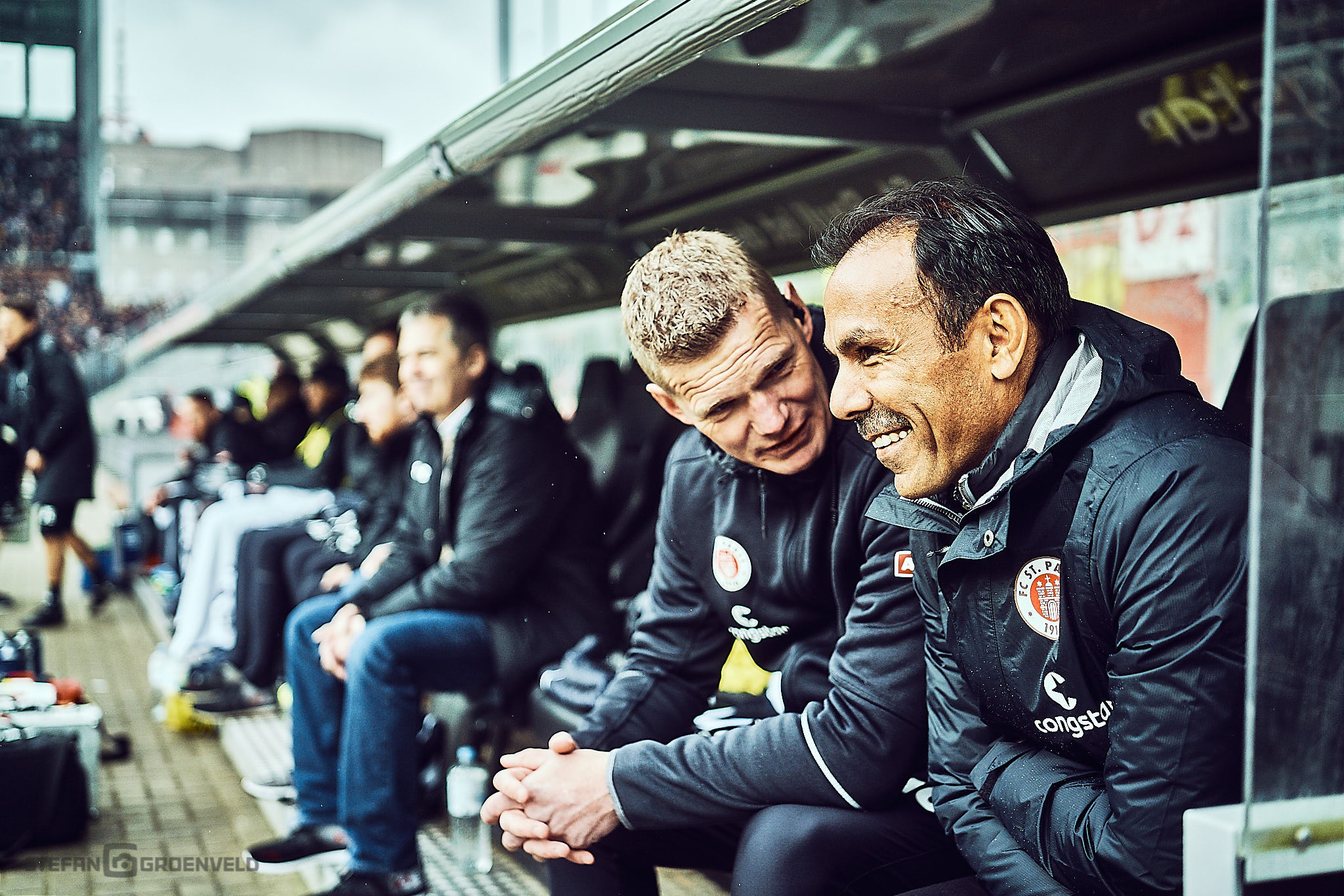 The FC St. Pauli shows two faces in the match against Arminia Bielefeld and you’d like to say: Finally again! To finally see the face we longed for, we had to go through a horrible first half and witness a very effective change in the beginning of the second half.

Match one after the change of coaches threatened to become disaster. Let’s be honest, Bielefeld could’ve, or rather should have scored one or two more times in the first 45 minutes. Yes, the penalty probably wasn’t justified, not because it wasn’t a foul but because the foul happened outside of the penalty area. However, it didn’t change the game and the FCSP was only able to run after Bielefeld’s appealing passing game. What made goal scoring chances for Bielefeld wasn’t the turnover but rather the badly performed pressing by our team. However, let’s start from the beginning:

The FCSP with some substitutions in the line-up: Alongside the two strikers Meier and Allagui, Miyaichi and Møller Dæhli started as offensive wide midfielder. In the centre Knoll as the sole defensive midfielder was replaced by Buchtmann, who acted as an 8 (central midfielder) or even 10 (attacking midfielder), and Flum. Dudziak and Park started as wing backs, while Hoogma and Carstens had to defend in the centre.

It’s well known that Teams led by coach Uwe Neuhaus try to solve most, if not all, situations in a playful way. As a reaction to the consistently flat build up play by Bielefeld, the FCSP broke its usual “receiving” of the opponent right before the halfway line and, again, tried playing a high pressing. The idea is completely correct but the execution was improvable. At the home match against Aue we had already discovered soberly that a high pressing with the strikers Allagui and Meier wasn’t the best choice due to their lack of speed.  This issue was again present this time, so that both strikers were unable to put any significant pressure to their opponents. And they wouldn’t need to, if the other players pushed cleanly at high pressing. However, that didn’t work well quite often. In my report to the Aue match I wrote, that pushing is extremely important. Otherwise the chains will be pulled apart vertically. This is what happened again in this match, because the team didn’t push consistently.

Bielefeld presented a better variant of high pressing and it was nice to see how the last chain quickly pushed to the halfway line if the triumvirate Klos/Voglsammer/Clauss decided to attack the FCSP players early. Such a high pressing requires good coordination and needs to have every player to push along.  If only a part of the team puts heart and soul into it, the attacking team can easily free itself from the pressing and the defending team’s (running) effort is all for nothing.

Due to the lack of assistance and too little pressure on the ball carrier, Bielefeld was able to outplay St. Pauli’s pressing and able to attack the last chain with almost equal numbers. In these situations Clauss and Voglsammer joined Klos in the attacking row on the outside positions. Using this move, the pressure on the FCSP was kept high vertically and horizontally. Quite often it were the breakthroughs via the outer positions that opportunities for Bielefeld. Actually, we should be happy that Uwe Neuhaus’ team wasn’t able to capitalize on this more.

It’s a pity that I particularly remember this rather unsuccessful attacking pressing, because actually the FCSP itself built up quite impressively (and I always consider high pressing desirable). While the outer midfielders offered themselves in the halfspaces and clearly behind the own strikers, this time they kept their offensive positions and thus the pressure high on the last chain of Bielefeld. The build-up was mainly exclusively via Johannes Flum, who often managed to carry the balls to the wing backs (who stood much lower than in the match against Duisburg).  Bielefeld acted in a 4-4-2 with Clauss or Voglsammer pushing into the first row next to Klos, while the other winger dropped into the midfield chain.

The FCSP tried, and often managed, to get balls to the wing backs in a controlled manner. Unfortunately, that was the point where the controlled build-up play ended, because the attempts to create triangles of Dudziak/Møller Dæhli/Buchtmann and on the other side Park/Miyaichi/Buchtmann only worked out very rarely an many balls were lost.

In the second half, St. Pauli coach Jos Luhukay made some changes and he was completely right about this decision.   The nominally 4-4-2 (if I had to name a combination of numbers for the formation in the first half) transformed into a much clearer 4-1-4-1.Here Allagui is targeting the left midfield and was supported by Knoll several times.  I have no idea if Møller Dæhli’s substitution was based on an injury (please don’t!) or on  sports reasons but with Knoll and the changes to the formation the game of the FCSP took quite some pace.

Knoll is worth a mention anyway. I want to remind you, that he was awarded as best centre back in the league by “Kicker”. At St. Pauli he played on the 6 (central defensive midfielder) for most time and sometimes, in the second half of the season, on the eight (central midfielder).  Yesterday, at the latest after Allagui left the pitch, he was actually to be found up front. It was Buchtmann, who fetched balls low while Knoll would buzz around Meier and thus made Bielefeld’s defence line sweat.

Anyhow, the FCSP got into the match way better. When in possession, the midfielders were mostly on line with Alex Meier at first. With short sprints into the back they tried to detach themselves from their opposing players and immediately after receiving the ball to create triangles with the wing backs, just like they tried in the first half.  It worked well. However, I’m having a hard time to credit the improvements in the second half to the tactical changes only, because I’ve had the general feeling the FCSP gained control of the game (sometimes it’s just a certain change of the momentum – some successful actions and Bielefeld is left speechless).  Mostly, the hands were kept off a high pressing.

The consistent 4-1-4-1 made Bielefeld face many problems, especially because Yabo and Prietl weren’t easily played to in the centre. Furthermore, Finn Ole Becker made a very positive impression in his debut by showing that he’s capable to make and carry out right decisions under high pressure. I’d like to see more of that.

What also worked well was St. Pauli’s counter pressing (even in the first half), thus there were only little dangerous situations after turnovers. Now there are generally three reasons for a well working counter pressing: The own position play, mental attitude (call it will, greed, willingness, something like that) and the opponent’s skills  Since the formation isn’t much different from the earlier games, there are two other reasons: the opposing team and the own attitude. I might get carried away here, but I’d still like to claim, that it is the attitude, seems different than in the previous matches. Maybe it’s just the usual effect of a change of coaches. Everyone needs to prove themselves again, some find themselves sitting on the bench/stand/starting eleven all of a sudden and want to show their skills on the pitch. Feel free to keep it that way. Now, if we managed to make the offensive pressing work, we might actually win a game again. The last win was six weeks ago…

On this background it’s almost unbelievable that we’re in fact still in close contact with the promotion play-off rank.  What a snail race! A few weeks ago it looked like Union Berlin and St. Pauli were fighting over two extra matches, now a handful of teams submit claims for rank three (maybe even for rank 2). In this constellation we”ll start from the back, but with a win in Heidenheim…

7 thoughts on “A little news from the older ones”