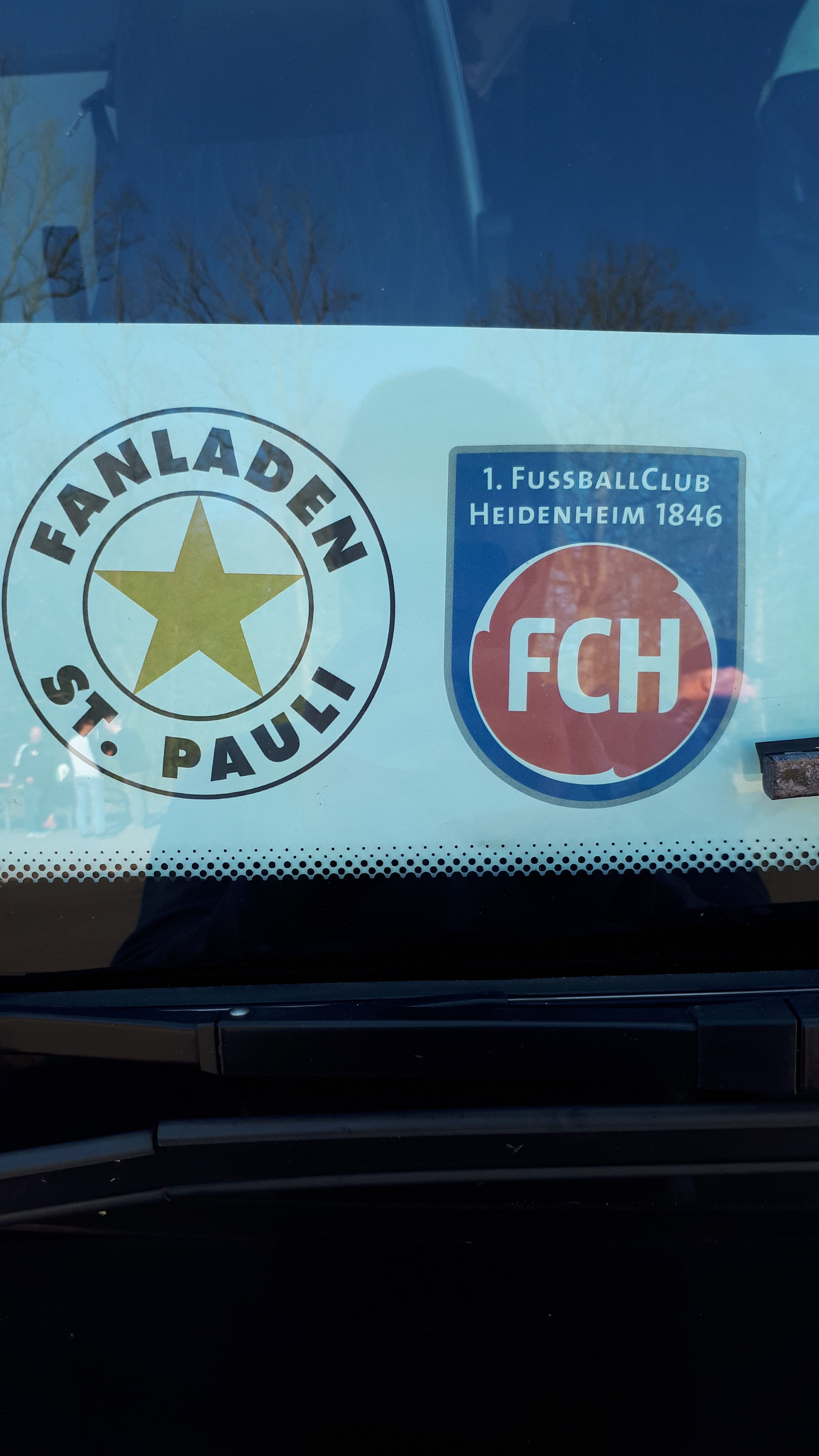 Ok, I am just finishing the last lines of this match report with a definite lack of sleep. It’s Monday morning 2.15am and I am awake since Saturday morning 6.30am. In the meantime, I caught a few moments of bad sleep. So, there’s the slight chance that this text will appear rather chaotic. This is the attempt for a meaningful classification of my trip to Heidenheim.

Well, I am by far no newbie but on the other hand also not joining away matches regularly. This is why I still try to report on the trip itself.
The bus of the Fanladen was supposed to leave at 2.30am. I myself thought that staying awake until then and catching some sleep after the departure would be a good idea. This was my first mistake. However, I wasn’t the only one trying to get some relaxing sleep while loud punk rock was hammering out of the busses’ PA.

But at latest when the sun was rising, sleep was no longer an option. As I was supposed to debut in my first away match as an AFM-radio match reporter, I took a rain check on the beer that would have welcomed the starting day. I am pretty sure that it was the resulting soberness which clearly showed me what kind of a Kindergarten squad the Fanladen has to supervise on away match trips. “I need to pee” is exactly the same what my daughter is always stating on such trips. Well, she is rather not stating “Breeeaaakkk!”, „LOUDER!“ and „What kind of shit music is this?”“ but „How much longer until we arrive?“ is something I witness instead quite regularly. Most of these things were well responded by the guys from the Fanladen. And before I forget: I also owe you guys my deepest respect for responding so calmly to such misbehaving 50 year old children.
The main concern for discussions during our trip to Heidenheim was the music choice and its respective loudness. I am sure you are all able to imagine how versatile the taste of music of a bus mixed with so many different people can be. Punk rock, distinct trash from the 90ties, horrible pop songs and evil songs pairing well with booze were streaming in and out. But due to the nerve wracking discussions about the music choice the outward journey appeared rather entertaining and the crisp 8.5 hours seemed to fly by.

All of a sudden, we reached the Kassler Berge and also left the Rhön behind us, unerringly heading for the Ostalb. After an unplanned sightseeing trip in Heidenheim, we finally reached the Voith-Arena. The Voith-Arena is home to a club which hosts the incarnated dream of a province club in the professional business. Well, it’s all rather rural in Heideheim and yes, at the stadium (at least on the main stand) it’s also a great exhibition skating of the village’s celebrities. Nevertheless, I cannot deny to give my deepest respect to this club for keeping its consistency on certain positions, which is something to wish for for our club and exactly what Oke would love to have as well. The club stuck to its decisions, even when fighting relegation at the end of last season.
And even if I am not a big fan of flag bearers and mascots, I really liked how Schnatterer and some other players were chatting to the fans after the match, which reminded me of some club league romance. The only thing missing for that would have been a beer served to the players. So, to name some good things about my trip to Heidenheim: I was definitely able to re-adjust some of my existing prejudices about other football clubs.

I was honoured to join Wolf as a match reporter for the AFM radio and thus my brain was kept busy to describe situations on the pitch while I was already watching newly developing situations. This is why I cannot provide you with a detailed match analysis this time as my brain is currently still not functioning properly again. You’re always smarter afterwards. One could have get certain that the FCH would aim to succeed in this match already when, after three seconds into the match, Marvin Knoll was hit during the attempt to stop the ball passed at him by something, which he would have rather assumed to be a medium sized construction tool (It was however Niklas Dorsch, who separated Knoll from the ball, hard but also fair).
And nothing changed in regard to this basic aggressiveness of both teams during the match. Throughout the entire match, the players of Heidenheim were providing our players with a feeling that they are deeply pissed when they are not in ball possession. And I have to honestly admit that I was deeply impressed by that, too. First and foremost, I was impressed that the players of Heidenheim did not get rid of their “Hand us over the ball asap, you ass!” mentality through the entire match. Our players were actually under stress on the pitch for the entire 90 minutes. Consistently counter attacked, they were set under massive pressure and had thus no time to make decisions. This inevitably led to mistakes. That’s okay, at least as long as the Heidenheim players have a similar amount of stress on the pitch. A match like this would have to escalate somehow. “They demand stress?” “No problem, they can have it!” would have been a reaction that I would have wished for if the own match idea doesn’t work out as planned due to the stress seeking of Heidenheim.
And it was announced as such already in the pre-match press conference, when a high pressing was again announced as the own match idea. Eventually, the FCSP acted rather less active with a 4-1-4-1 formation in which they tried to only attack the Heidenheimer players at a late stage. Hence, Knoll and Buchtmann acted with man-to-man marking of Andrich and Griesbeck, in order to block pass options in the centre (this is why especially Griesbeck moved towards the right flank though).
Especially during the first half, the FCSP was however trying only to get any hold of the play of Heidenheim. The Heidenheimer’s were acting with a 3-4-3 formation to build-up, whose attacking line was varyingly passed at. Actually, the 4-1-4-1 formation of the FCSP was responding quite well to this formation as the wide setting of the Heideheimer’s formation was well received through two lines of four.

The problematic thing in this regard was that the FCSP was not getting any grip of Niklas Dorsch, who was the chief executive of the play of Heidenheim. (Here is some advice how to actually get a grip to Dorsch). Due to a lot of time during the build-up play, Dorsch found various things to do. The only 21 year old holding midfielder, mostly used diagonal passes to initiate attacking situations in the box. Dude, I am quite impressed of this guy. Strong in both play and duel situations and also a leader in regard to the needed aggressiveness. From my point of view, it is deeply related to the signing of Niklas Dorsch at the start of this season that the 1. FC Heidenheim can still dream to get promoted at this stage of the season. And for sure, also because of the current state of Robert Glatzel. He is the same height as e.g. Meier but a totally different type of player. Very versatile, fetches the ball from deep positionings also and he is also capable to initiate promising chances (as shown with e.g. the 1-0). Both players will for sure play in the first division next season, no matter if Heidenheim gets promoted or not.

One of my personal highlights was when Finn Ole Becker left the pitch. First, he became the pivotal aspect of the FCSP’s play, but then he received his second yellow card (Certainly, if you’re already having one yellow card you shouldn’t force a second one by aggressively attacking every player). However, when he was sent off the pitch, he took a bow to the rest of the team. This was another appearance of him that triggers the lust for more. For sure, he wasn’t flawless either but he showed the courage to play passes. Such a bummer, that he cannot show his qualities in the next home match again. On the other hand, it was the visitor’s stand which made me (sitting on the press’ stand) proud during the second half of the match. „Hier in Heidenheim, schenken wir uns einen ein“ [Here in Heidenheim we gonna take another one] was loudly audible in the stadium and was just another announcement with two possible meanings. At least when you were witnessing the happenings on the pitch and the alcohol level of the FCSP fans after the match.

Even if it’s bitter, this match clearly confirmed the “We are not one of the top teams” which was always mantra-like preached by Kauczinski. And we cannot deny it. Maybe, this is due to the fact that only two weeks after Luhukay’s coaching, the team wasn’t able to yet re-find the lost ingredients of courage. But maybe, we simple don’t have the quality. I have no idea either.

We should rather focus on the further development for the new season now. The next matches won’t hurt anyone because we are not facing any further promotion or relegation candidates. Sure, the Fernsehgeldtabelle, blabla [the positioning in the table at the end of the season will impact the amount of further payments of the tv-broadcasting stations]. From my point of view it is much more important to further developed the own type of football under real combating conditions. However, it appears somehow problematic that 26-27 players are already signed for the next season which leaves not much space for variation. Especially, if certain types of players are missing for a certain idea of football.

On the return journey, I realised that the preparation for the next season did already start, at least in the bus. And I am more than impressed of the professional knowledge of some lads on the bus who were able to name the last win against Osnabrück as well as the last scorer and the respective minute in which the goal was scored.
And on the return journey we also realised where travel mates of the respective routes Hamburg-Heidenheim and Kaiserslautern-Rostock would have been able to meet: on a service station in Göttingen! This was exactly the moment when the mostly laid-back guys of the Fanladen clearly raised their voiced by loudly demanding to immediately step fully on the accelerator pedal.

One thought on “Heidenheim – as usual, this and that”