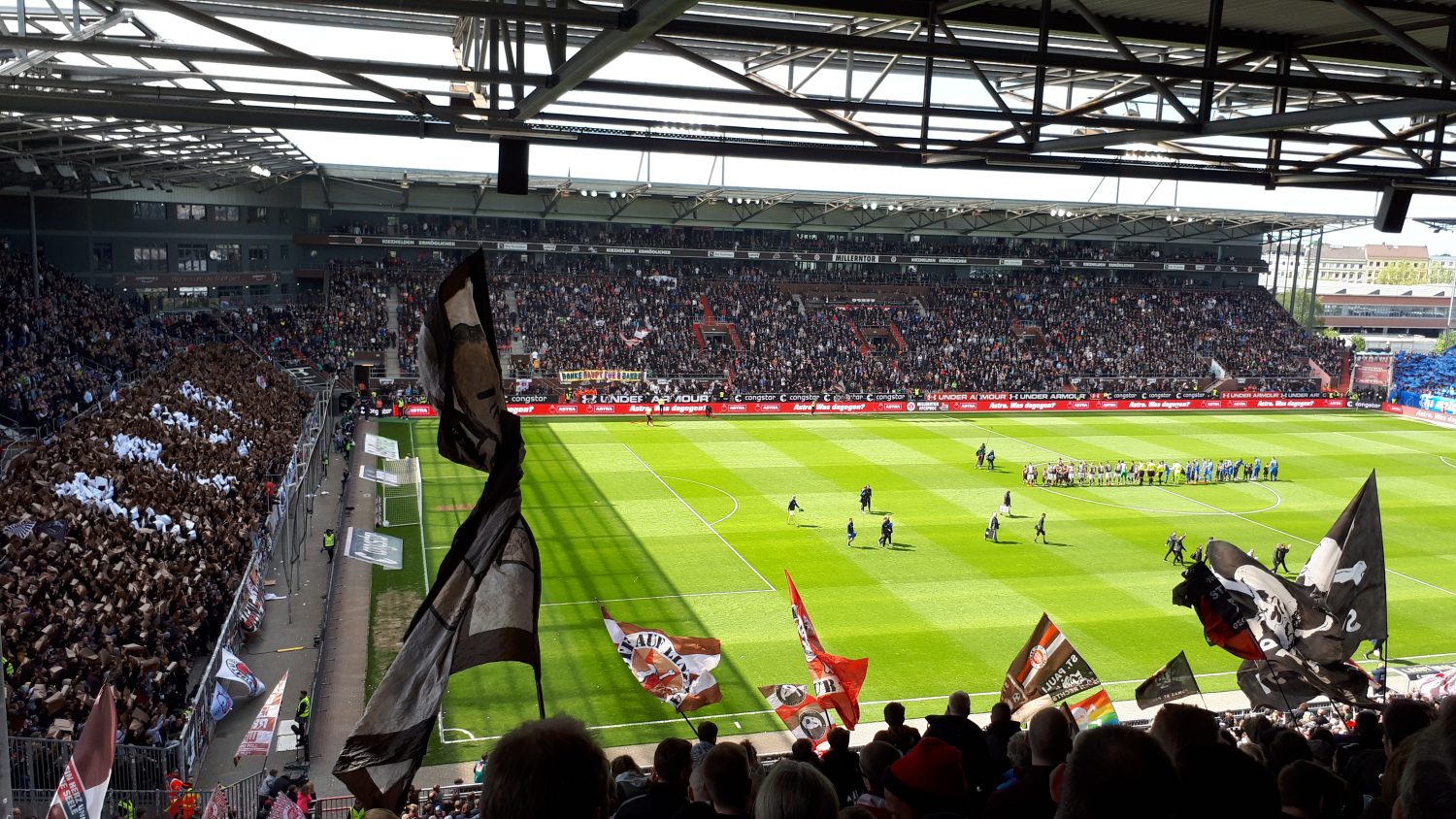 I am still annoyed and will keep on being that all summer long. As I attended a wedding reception on Saturday (as many other folks from Block 1 of the Gegengerade), I am anyway having a bad mood right now. But not because the wedding reception was a big failure, au contraire, it was a huge festival. A festival whose bells were still ringing in my head all Sunday long. And that’s why I am even more irritable than usual. I am particularly annoyed of the fact that 60 points were enough this season to get promoted to the first division directly and we’re the fools not participating! What kind of unbelievable chances we had! Actually, we threw away so many chances already and all promising positions of the league’s table appeared already gone regularly during the last round of the leg. And nevertheless, steadily another door, however, opened somehow, but the FCSP did not walk through. How such things are better dealt with was shown by the SC Paderborn which were full nine points behind the play-off position and even 12 points behind the direct promotion rang on the 25th match day after they lost against us and against Aue after that. And now, after their win against the hsv (hahahahahahahahahahahahahahaaaaaaaa),the East-Westphalians can dream of the direct promotion and are for sure qualified for the play-offs already. What if, doesn’t matter.

The chances to get promoted were however not wasted against Bochum yesterday, but already against Dresden, Bielefeld, Duisburg, Sandhausen, Heidenheim… (and I could continue with this list almost endlessly, which clearly shows the entire dilemma of the second leg of the season). Instead, we were allowed to witness a match which can confidently be considered as a preparation pre-match for the new season already:

Besides the already frequently mentioned lack of courage and the rumours about the sick character of the team, another horrible listing must be considered to explain the brutal decline during the second leg: Ziereis, Veerman, Sobota, Avevor, Knoll, Zander, Buchtmann… and many more. The list of the FCSP-sickbay is long. During the first leg, I could still celebrate the fact that we were able to have some particular players on the bench. But recently, the bench of the FCSP had to be filled with some players who didn’t really play an important role during the entire season. One of those is Brian Koglin, who was appointed as a central defender into yesterday’s starting squad (and he was performing well!). Additionally, Lankford and Park were appointed as left and right midfielders, which is – as much as I appreciate them as footballers- definitely not the first choice for these positions.

Despite having to play with such a thin staffing level, the FCSP was playing a first half which was triggering my lust for the new season already. The FCSP started with Möller Daehli and Becker in the center. When Luhukay took over, I stated rather fearfully that his preferred formation is the 4-4-2 flat (which means to play with two holding midfielders), but yesterday, I was open to conviction and had to realize that this formation allows to build-up some really good football. Jos Luhukay and even more than him Bochum’s manager Robin Dutt provided some interesting insights at the press conference after the match (to which my attention was kindly drawn with a hint to my addiction to “pitch chess” – a video of the press conference can be accessed via the fb-page of the FCSP).

The 4-4-2 of the FCSP was performed in the classic order: mostly Möller Daehli dropped between the two central defenders, which were thus able to move towards the outer positions. By doing that, the fullbacks Buballa and Kalla were virtually “pushed” to the front. Both of them were thereby keeping their outer positions so that the horizontal pressure against Bochum’s players was fairly high. The left and right midfielders were then not dodging towards the center, as it was sometimes already done in other matches, but joined Allagui and Diamantakos in the attacking line instead.

Bochum also acted with a classical 4-4-2 formation in their defence, which was performed with a clear spatial orientation which is well-known at St. Pauli. Due to the fact that Becker and Möller Daehli rather acted as two deeper midfielders and none of them acted between the midfielder’s line and the back line of Bochum, an “FCSP-free zone” emerged in the pitch’s center. Both central midfielders of Bochum, Eisfeld and Losilla thus became virtually unemployed when defending but were also trapped as part of their midfielder’s line of four at the same time. This lead to the fact that the FCSP could build-up very simple as they outnumbered Bochum close to the ball and were also not having much pressure from the opponent. So, Becker was able to turn on in the center and dribble towards Bochum’s midfielders line, while all four fielders of the FCSP’s attacking line were trying to offer themselves for passes between Bochum’s back four and their midfielder’s line. This worked out pretty well and especially on the flank of Park, spaces emerged which the FCSP could use.

The formation of the FCSP can be described as very courageous as a ball loss in the build-up due to the high positioning could have triggered ugly counter attacks of Bochum. However, that didn’t happen and we should be happy about how brilliantly Becker and Möller Daehli performed during the first 30 minutes.

However, successful completions were definitely missing. For sure, football is always a result oriented sport and I can totally understand critical voices which wonder what is actually good about a dominantly performing team that is however not able to elicit compelling scoring chances. (This doesn’t sound entirely randomly just as another match report of the Dresden match where the FCSP was also not able to turn their dominance into scoring chances) However, football isn’t entirely predictable either. Even Pep Guardiola, who at least won the English Premiership the same day, does “only” take care that his teams outnumber their opponents in the last third or secure a breakthrough. And the players should take care of the rest by themselves. Luhukay’s statements at the press conference also show that the team intensively practised the play in the last third during the course of last week, however, this was seldom to witness on the pitch yesterday.

So, the very good beginning of the FCSP ended without any goals and Robin Dutt explained at the press conference that the VFL changed their 4-4-2 formation to a 4-2-3-1 formation after 30 minutes. By doing that, Bochum intended to get more grip to the FCSP’s build-up play. To be honest, I couldn’t clearly witness this 3-1–positioning of Bochum’s offensive fielders (which doesn’t mean that it wasn’t there). However, I was clearly able to witness that Losilla stuck himself on Möller Daehli when in ball possession and thus breaking the chains of Bochum to better disturb FCSP’s build-up play. So, strong space oriented chains changed into a rather man-to-man oriented system.  Until half time, even when in ball possession Bochum had massive problems and put themselves in difficult situations or provided the FCSP with promising transition situations respectively. This was first and foremost caused by the beautiful high pressing of the FCSP which marked every player wearing a blue shirt man-to-man. And if this was not the case, the FCSP acted with a 4-4-2 but with a much stronger man-to-man marking than Bochum which also lead to Möller Daehli appearing in the attacking line sometimes and Lankford and Park “pulled” into the defending line by their opponents.

Sadly, the FCSP wasn’t able to constantly keep the speed of the high pressing, which is however totally normal due to its intensity. Additionally, Bochum changed into a 4-1-3-2 formation (as stated by Dutt) for the second half and was thus able to eventually stop the well-to-watch game opening of the FCSP. As a straight response or rather despite the now higher positioning of Bochum, Möller Daehli now acted clearly more offensive which lead to some promising transition moments but also elicited an outnumbering in the center. Thus, the VfL Bochum was now getting better into the match, which was however also leading to the fact that neither the FCSP nor Bochum were able to keep their order on the pitch. Rather the ball gains of Bochum in even better positions eventually lead to more chances for Bochum.

And as neither the FCSP nor Bochum, which was additionally challenged by a double injury during the second half, were actually able to elicit compelling scoring chances, a justified draw was the match result. From an FCSP perspective, the finding remains that FCSP changed tactic wise. The FCSP does no longer need to face criticism that the team is acting without courage. And I really wish that it’s gonna stay like this.
And apologies to everyone who is still reading this text and did not stop irritated. Today, it’s only about tactics, as my hangover does not allow for any entertaining side-stories. But I could also draft an intensive and spiteful text about the derby cursed bigheads from the suburb. But for now, I just keep it like that by further eating some popcorn, heavily laughing and awaiting the invitation for a barbecue party.