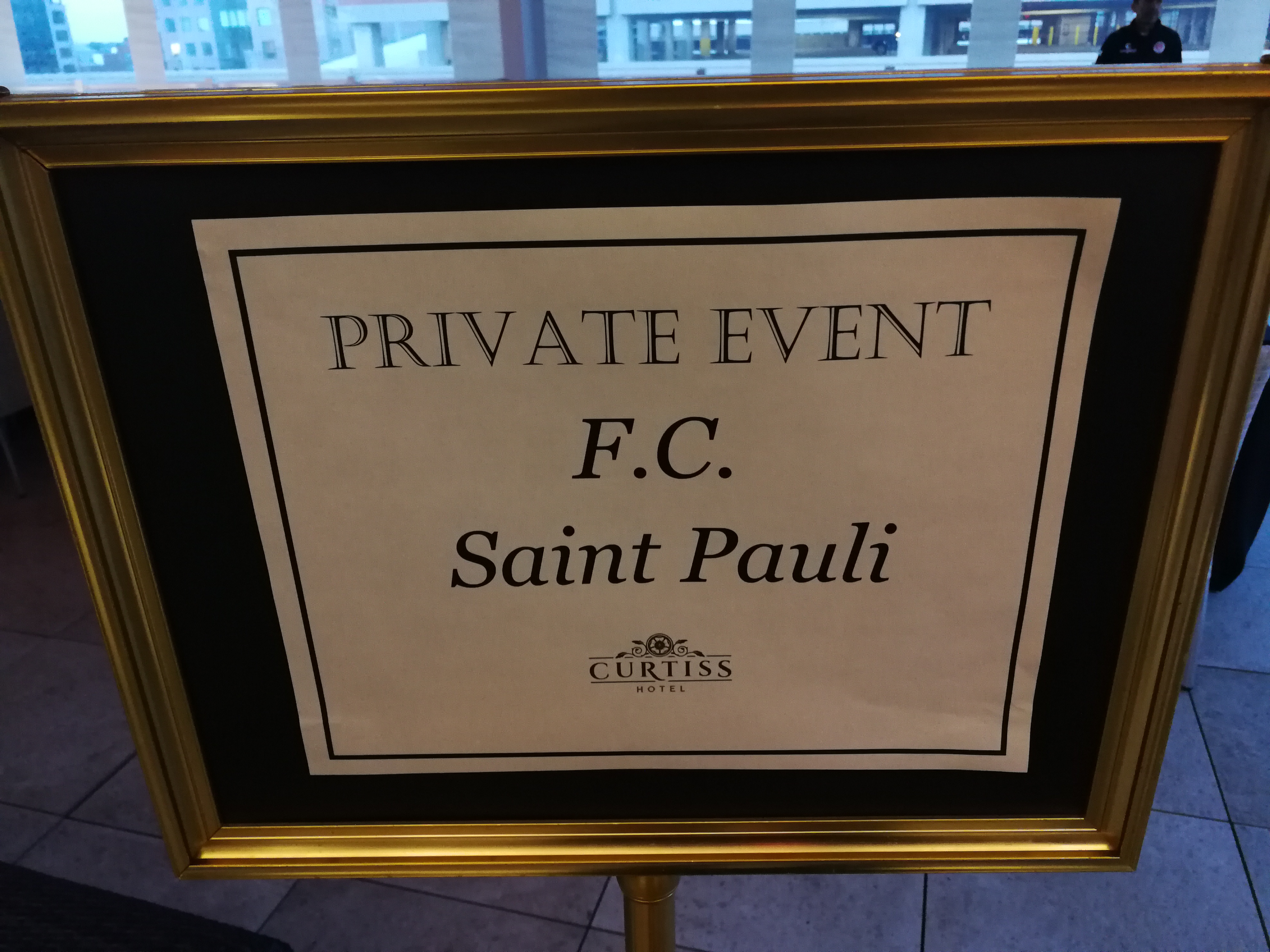 Like the year before, the FC St. Pauli embarked on a trip to the United States at the end of the season, but this time with a little detour to Canada. “The FCSP“ is, in this case, the professional’s squad (partly “substituted” by some players of the U23 and U19 youth teams) and a delegation of the club’s headquarter, the executive committee and the supervisory board. Additionally, they also invited me to join them. Due to the planned visits of other fan-clubs in the US as part of the trip’s supporting program, this was for sure no bad idea. As I already made some great contacts the year before, I was keen to meet them again. Although I was also able to welcome some of them already at the Millerntor during the course of the season. Awesome, how much money and time some girls and boys invest to see a single match.
But I think we are familiar to similar things over here, where some of our supporters have already been to Fürth for ten times or even more.

Before our departure, the FC Buffalo was already visiting us in Germany and played a friendly against our U23 team at the Kollaustr. in front of some 100 spectators of whom 12 were even from Buffalo. Sadly, there was no beer sold at the friendly about which I was almost kind of embarrassed. During the course of our trip, I made my peace with this fact, but I will get back to this later.

Our trip should take us to New York first, then further to Buffalo (with one match at each destination), before we were supposed to return to Hamburg from Toronto. So three cities which are all hosting an FC St. Pauli–Fanclub: The East River Pirates in New York, the FC St. Pauli – Buffalo and the FC St. Pauli – Toronto Fanclub. It couldn’t have gone bad, could it…?

On the first leg of our trip, we were joined by Thees Uhlmann. He joined our travel group at Frankfurt Airport to play a gig at the East River Bar on the evening following the match against Cosmos.
And straight away, he added to a good mood: When his guitar was checked at the airport’s security check, he was asked by the safety officer:  “Ey, I know you! Aren’t you Bosse?” (another German singer-songwriter)“, which he simply denied. The dude disappeared but re-appeared after 3 minutes: Of course not! But I know it now: You are Thees Uhlmann of Kettcar! (another German band supporting St. Pauli but not Tomte either)
World class, that’s how I imagine the life of the famous!

A lot of the trip could easily be followed along the club’s social media channels, that’s why I am not aiming to write another trip diary (for such a diary, please refer to the Vereinsblog zur USA-Tour), but rather focus on the meet-ups with the supporters from overseas instead.

On our first morning in New York, Shawn of the East River Pirates fetched us from the hotel to take us on a short sightseeing tour to Manhattan. Gorgeous weather and a local guide contributed to happy faces despite our jetlag. Great that fans and team can be such close and meet on an equal footing which was clearly recognizable during the whole trip. Later that night there was the first larger meet-up of Fans and players/delegation of the FC St. Pauli: At a concert at the  Knitting Factory in Brooklyn where face2face and Kitschkrieg performed. For me, the venue was very cool. Two separate rooms, both offering the chance to see the stage but separated by a glass wall, which offered to have conversations at lower noise levels in the other room. Face2face played some good hardcore, but I will no further comment on the band that opened for them as I did not have the chance to listen to their gig. The evening was closed by Kitschkrieg at the turntables, which contributed to some further dancing…

However, some parts of the team, the coaches and other fans still embarked on a short foot walk to the East River Bar, which was already crowded with other supporters wearing brown and white colors. What a great bar with nice in- and outside areas. If you are ever gonna be close by, you should definitely visit the home of New York’s bike messengers and the fan-club. It’s worth it!
But it shouldn’t be too late that night as for the next day, the panel „The rise of independent football“ was planned. Hosted by Nick Davidson (renown for his book Pirates, Punks & Politics) who discussed with Oke and (amongst others) with Joe Barone (Senior Vice Pres., New York Cosmos), Shawn Roggenkamp (FC St. Pauli NYC), Patrick Infurna (Fan/Ultra Cosmos NY), Tim Kelly (Chairman Chattanooga Football Club) and Sean Mann (CEO Detroit City FC).
Very interesting, but the panel could have benefitted from a larger auditorium. However, this might also be related to the kick-off time. On Twitter, you’ll find some videos of the session. For the evening, the friendly against Cosmos was scheduled. Honestly, I only knew the club as the club of Pelé and Beckenbauer but not the “current“ club, as this club was “re-founded” in 2010. The ground for the friendly was supposed to be at the Rocko Schamoni, eh Rocco B. Commisso Soccer Stadium, which hosts a stand for up to 3.500 spectators. Before the match, we meet at the bar around the corner. Nice venue. The woman behind the bar did for sure not expect such huge numbers of spectators, but she was absolutely capable to handle the situation – respect!

This was definitely the moment to realize that we have so much in common with the supporters of Cosmos: Cool guys who have their hearts at the right place. In the stadium, there was absolutely no chance to buy any drinks but the two supermarkets around the corner knew how to benefit and we were able to easily take our own drinks in bags into the stadium from there. As there were no security checks in the stadium at all, we headed straightly back to the supermarket at half-time for more drinks.

At the match, there was reasonable pyrotechnics presented from both sides of supporters and even a shared choreography of the East River Pirates and the Cosmos-fans:

A beautiful message by beautiful people. So happy for all involved in yesterday's opening display b/w #NYCosmos and #FCSP pic.twitter.com/HdJ11fL7gd

In the stadium, there was a colorful mixture of  St. Pauli–fans: Locals, some people from Hamburg, tourists and fans from the whole North America: Awesome! The melodies, however, might have to be practiced again.

And after the match, we quickly headed to the East River Bar in Brooklyn, where Thees Uhlmann was supposed to play his gig. And what should I say: It was fantastic! A great guy played a great concert in a great venue in front of so many other great guys – is there anything else you could wish for? I had so much fun and I was sure that many others were feeling the same. The evening ended lately at the already closed hotel bar, but you know how to help yourself!

The next day was supposed to be a travel day and we headed to Buffalo passing absolutely NOTHING. Let’s put it like this: Luckily, I am used to bus rides and everything related to that…In the evening in Buffalo, we joined an “unofficial” supporters night, first in a bar, later in a brewery and the mood was good.

The next morning, the delegation and the FC. St. Pauli Buffalo Fanclub drove to an organization named “Journey’s End“ which provides extensive (!!!) support for refugees. The fan-club is supporting the organization financially through donations, especially for their soccer project. Here we were clearly shown where the differences between the USA and Europe lie. With Trump as POTUS, these organizations are particularly challenged.
But Buffalo remains stable! Unfortunately, the surrounding areas not at all…

And after that, there was match-day! Befitting our social status, we had a “parking lot“–party next to the stadium before the game. At this party, the  Buffalo-fans met with the St. Pauli-fans, which were predominantly represented by our fan-clubs of North America. Together, they “marched” to the stadium, where again no safety checks happened, which resulted in a lot of pyrotechnics and byo-beer inside.
At the end, the team was celebrated and Korbi Müller, Richy Neudecker and Sami Allagui received their farewell celebrations – all the best for you guys!

In the evening, another party including Live-Kara-Oke, and there’s a rumor that even some videos of this event exist… (Layouter’s note: Bullshit…)
Another great evening with joined partying of the team and their fans.

On the next day, we headed towards Toronto with a short stop at the Niagara Falls, which were impressing! But if you are disembarking your coach there and are welcomed with a flag of the Toronto fan-club, which is so happy to see you, you know why you are standing where you are. (well, obviously not at the Niagara Falls but…I mean).

The following day, we headed to Toronto, from where the team flew back to Hamburg and parts of the delegation to Lynchburg the next day.
Sandra from the supervisory board, Andy from the AFM and myself stayed another day: with parts of the delegation and the Toronto fan-club we visited an MLS-match. But before, we went for something to eat in a yacht-club which was brilliantly located as the water taxi took us straight to the stadium from there. Well, this is how I would always like to travel to the stadium from now on…

At the second half of the match, we met with TFC Red Action, a small anti-fascist fan-group, with which we closed the day at the Dock Ellis, which is home to the Fanclub of Toronto – another great evening!
The Dudziak-shirt is still supposed to be taken away from there…

On the next day, Andy, Sandra and myself indulged in another sightseeing trip in the city guided by Mark (FC St. Pauli – Toronto), who showed us Kensington Market, it was great:

And this is how an impressive trip came to an end.
We could make new contacts, further strengthen our ties, and it was clearly shown what the FC St. Pauli and its Fans are able to accomplish and what meaning this moderate second division participant is able to arise even on other continents. Insane!

Thanks to the whole Nordamerikakurve (North America Stand), particularly to the fan-clubs of New York (especially Shawn), Buffalo (especially Ernie) and Toronto (especially Mark) as our “hosts”:

Off to Hamburg!
It was really a pleasure what you guys from @nordamerikurve have done for us during #FCSPgoesUSA
Thank you espacially to our hosts:@FCStPauliNYC@FCStPauliBuf@FCStPauli416

It was a blast!

THANK YOU FOR EVERYTHING!!!

But also “Thank you” to the FC St. Pauli for this trip and for agreeing that the exchange with your supporters is of enormous importance, which must not be neglected. A huge thank you for that, especially to Bernd von Geldern (but also to all the others involved). Besides, it’s nice not to be the tour guide when you go away with a group.

And thanks to Thees Uhlmann, rarely sooo much laughed!

I really hope that we are able to get to such a great feeling of community here in Hamburg, too. Within the club but also in its vicinity.…
These trips showed the potential they bear.
// Justus / Fanladen (Translated by @Parneq)