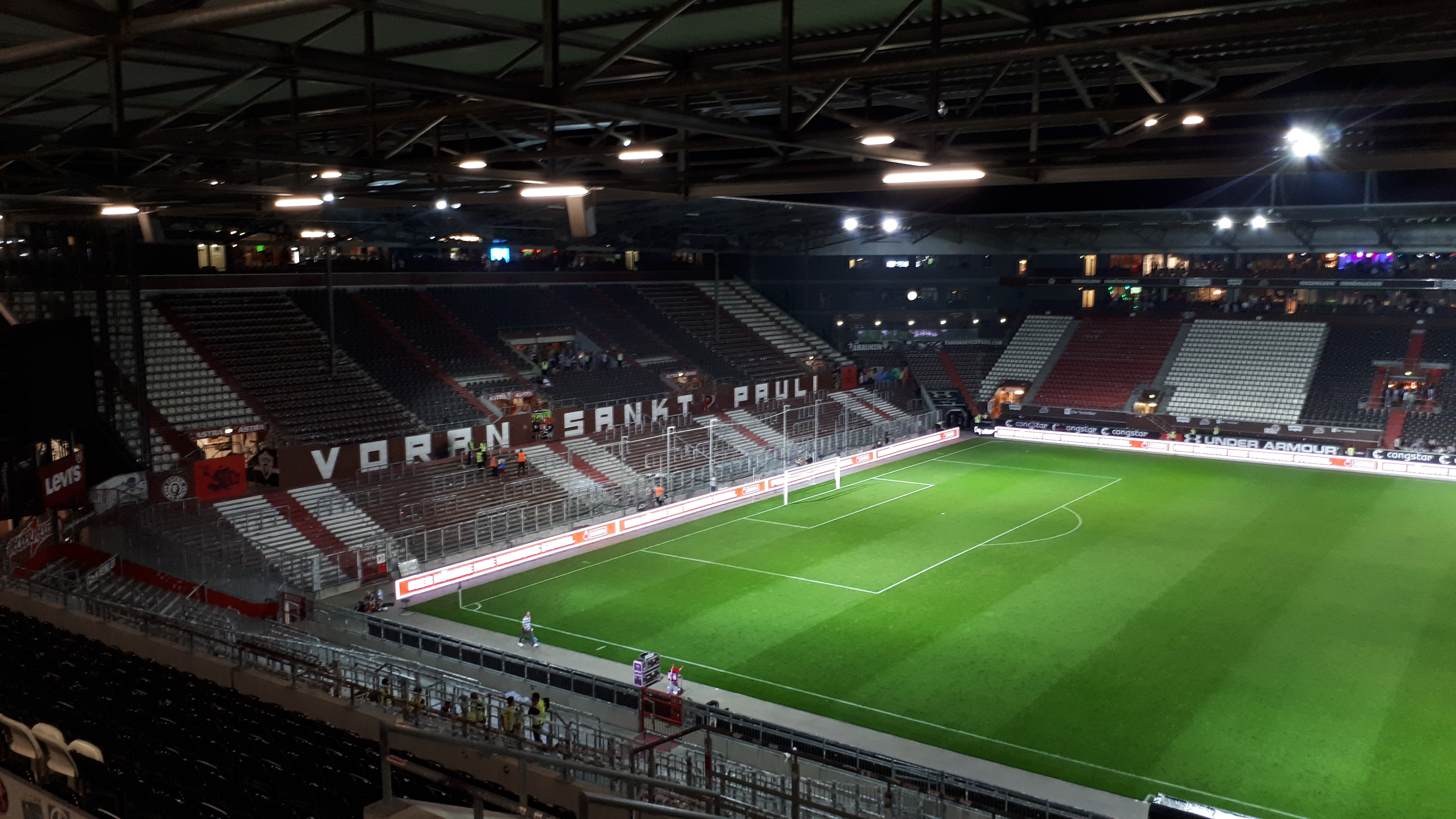 “We can hear you guys up to our place” was the news I received around 9.50 pm. From my neighbour in the Rothestr. in Ottensen (which is at least some 3km away from where the magic happened). He referred to the antiphony during the second half and the following 2-0. I am sure that if I ever get asked which FCSP-moments I memorized, this one will certainly get a definite place in the hall of fame. Please, save a spot for this moment in the museum! Seldom, I experienced a louder Millerntor than during this antiphony which sustained endlessly and reached its climax with the 2-0. Anyway, it was mega intensive, I already got goose bumps during the  ‚Herz von St.Pauli‘ as there was already a lot of fire recognisable in the participating throats. Pure magic! Dude, Sankt Pauli ay, please, please, never stop existing!

Yes, we won this mega intensive match. And for sure not because we were the better team in the second half but rather because we used our chances and we supported the team from the stands enormously.  Especially during the first half, this appeared completely different.

The FCSP started with both new team members, James Lawrence and Matt Penney. And if this wasn’t already enough, the FCSP presented a backline of three for the first time during the first half in a home match (at least, at 1.40 am, I cannot remember another appearance of such a formation in a home match). And this worked out quite well. Due to the constant moving up of the full-backs Penney and Miyaichi to Kiel’s backline of four, a lot of space was created for the build-up play. Partially, the FCSP didn’t play a line of three as Himmelmann was moving out of the penalty area and to the position of the right centre-back.

Only seldom Knoll or Becker dropped out of the space of the six. Knoll was mostly doing it to create more space in his back for Becker, who was despite a relatively tough guard also able to create free spaces and to ignite from there. But mostly it were the build-up situations initiated by the full-backs which worked out better. The FCSP frequently overloaded the right side with Möller Daehli joining there to create promising situations for pass triangles. Kiel tried to react to the FCSP-build-up play with a 4-4-2. But with the high positioning of the full-backs and the movement of MMD to the flanks, Kiel was only seldom able to initiate promising transition play situations.

In the first half, however, the FCSP was usually making good efforts only, although some breakthroughs were made on the right side. When Kiel was in ball possession in the first half, the FCSP also reacted with a 4-4-2 or – and this was quasi the ultimate disturbance of the build-up play – Kiel’s formation was mirrored by marking every fielder man-to-man. This lead to some worries on Kiel’s side. And as the efforts of the FCSP in the first half were quite promising though but not forcing anything either (which was mostly simply caused by many blocked shots) and Kiel was also not able to stick to their match plan, the only remaining weapon was the well-known wear-down fight: many long balls, a lot of pressure to second balls but also sometimes with some unintended balls.

What added some more worries for Kiel was that their central midfielder Sander had to be substituted after 30 minutes. But Schubert utilized this substitution for a general change of his system which showed to be effective especially in the second half and paid off – at least by an increase of goal attempts. With Janni Serra, he brought a second striker on the pitch. This caused a much deeper acting of Lee and Özcan in the first half while in the second half Kiel’s centre was basically eliminated. When in ball possession, the two central midfielders, Mühling but foremost Özcan, were dropping to the full-back positions, which caused the original full-backs to move up far to the front. Selectively, centre-back Hauke Wahl aimed for his infamous attacks to the midfield. And from the other direction, the strikers Serra but foremost Lee were also dropping back to the midfield. Thus, a really appealing position-play was initiated by Kiel. This put a lot of problems to the FCSP and lead to Kiel acting dominantly throughout the second half. But the FCSP also reacted during the half-time break and formed their backline of three into a back four. This was not entirely due to tactical reasons as Kalla was for sure completely overstrained against Baku and his yellow card was for sure not helping either. (BTW: Props to the scouting of Kiel; what a brilliant transfer Baku appears to be!). The FCSP substituted Lankford and with him on the pitch, the formation changed to a 4-1-4-1 with Miyaichi as a right full-back which appears to become his new regular position. This was certainly a reaction to the high speed of Baku, which was replied to with speed. Bugger that Kiel was also accelerating massively with Atanga on the other side.

However, we were taking the lead after a header of Lawrence (Set piece goal!!!) and there was only little missing to also make Kiel’s keeper Reimann join the ball into the goal. What an elemental force! The cherry on the whipped cream of a successful debut. He did a great job at the back. And while Lawrence was experiencing a debut with a cherry, Penney sadly had to face a slightly different red. The yellow-red card was extremely annoying,  with another yellow card already in the account kicking the ball away in such a situation is for sure not the brightest idea. Doesn’t matter, he will be back for the derby and by then he will have successfully overcome the problems of adapting to a new team which was clearly recognisable yesterday. And hey, it’s okay for everyone playing here for the first time to get overwhelmed by the atmosphere in the Millerntor.

I am quite reluctant to write it but Kiel would have rather deserved two goals. Already before, but especially after the 1-0, Kiel had a bunch of well-played chances. Remarkable that none of them hit the goal (but also a great job of Himmelmann). This was certainly a really difficult phase in which Kiel was forcing the FCSP more and more into their half of the pitch and winning almost every second ball. But: We are always there for you, FCSP! For sure, Dima was preparing the 2-0 extremely well, but the scorer point is also well accepted by the south stands and the Gegengerade for their antiphony. And wait, by the way: All the best for your birthday Christian Conteh! May the club gift you with a professional contract.

After the 2-0 is before the 2-0, that’s what all attendees on the pitch must have thought as they kept on playing as if nothing had happened. So, a goal against us was the logical consequence. It would have been much too boring if we would have taken this win “easymobisy” to home.
With a lot of fight and literally also a lot of cramps, the first three points of the season were harvested. Phew, the relieve about these three points was noticeable. And so, we were allowed to spot a smile on Jos’ face. It was only one amongst many in the stadium yesterday. And I really hope that I will see this a lot more often during the season.