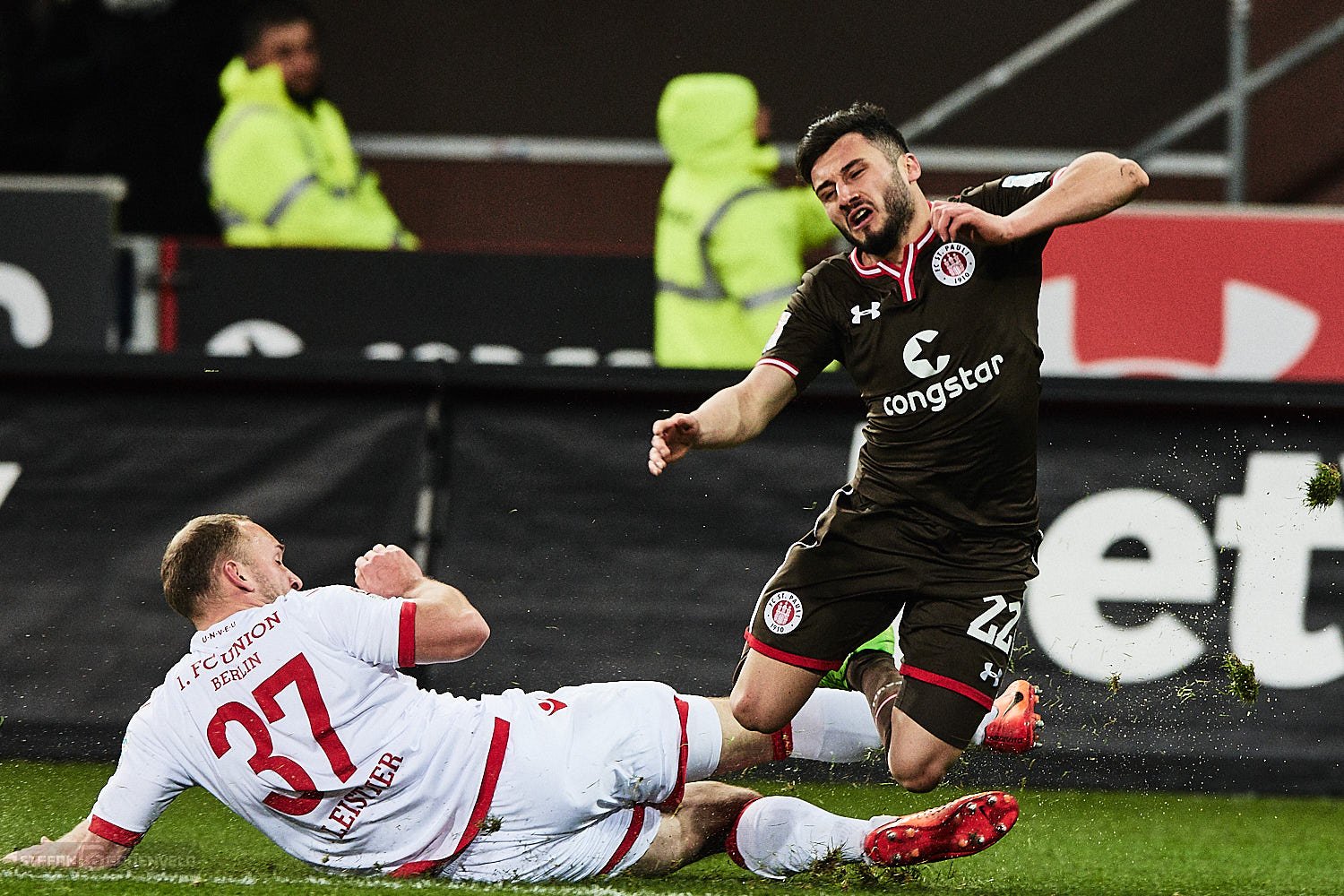 Update, 14th October: Sahin has been released from his duty at FCSP.

It was in July 2016, when the FC St.Pauli signed a young Turkish also playing for the U-national team. Enver Cenk Şahin came as a loan from Basaksehir and was so enthusiastic in his 27 league appearances (four goals, six assists) that the cheers of all fans were so great when after a year the loan was converted into a fixed change, after all, for circulated 1.3 million € (= most expensive purchase in the club’s history).

One and a half years later (January 2019), the once-great love (“Cenk das Ding“) was noticeably cold, followed by a loan to FC Ingolstadt and a return in summer, which obviously didn’t really inspire anyone.

What had happened? From a sportive aspect, it was often difficult for him in the respective system, because his undisputed offensive strengths were often thwarted by his blatant weaknesses in defensive work and, above all, his general understanding of defensive work.

Additionally, for the fan scene, he was the exact opposite of fan favourite Deniz Naki, who made no secret of his love of Erdogan on his Instagram account.

After his return, he asserted via the media that he now wanted to know it again, but after all, he wasn’t able to show it on the pitch. Probably also because Luhukay requires a certain fitness for his system, which was probably not yet given at Cenk.

Well, today the test game against SV Werder is scheduled, and thus the chance for the people from the second row. And indeed, a look at Cenk Şahin should be the most exciting one, at least before the kick-off.

Because the question is: Is he in the squad at all?

That this question even exists is due to his Instagram story which he posted yesterday:

And now it’s going to be difficult.

A player of FC St.Pauli who advocates for a war of aggression? Who doesn’t appear for the first time with statements that can be frankly described as nationalistic?

The protest in the social networks came quickly and should not have surprised the club – normally not the player either because he had already run into headwinds with his last political statements.

Demands for consequences by the club were to be read, partly in addition to statements which barely left any space for any sophistication or distinction.

Today, USP published a statement, which in its clarity leaves little room for maneuver and even a nomination of Şahin for the squad seems rather unlikely.

So what comes now is my personal view of things, which of course is absolutely from the outside and doesn’t claim to be completely flawless.

First of all: I agree with USP that due to the repeated statements of Şahin I don’t want to see any more appearance of him in any squad of the FCSP.

This is FC St. Pauli, a club which aims to stand for certain values in professional football more than any other club and from my point of view will continue to stand for them. The support of a regime like that of Erdogan is – if not at all – compatible with these values, and by no means is the direct support of a war of aggression against a suppressed population group. If Şahin would silently think but not articulate it, this would be bad enough. However, public statements on his channels (>14,000 Instagram followers) cross a line, especially in case of repetition.

Let us come to the “but”: What Şahin writes here should fall under the concept of freedom of opinion. We don’t have to like this opinion and we don’t have to share it, but many people in Turkey will think like him and probably also many people with Turkish roots who live in Germany do.

From our point of view, Erdogan may be a despot or even dictator, in Turkey, he is democratically legit. Like Donald Trump, by the way, who also plays an important supporting role in the current conflict.

Is it now permissible to publicly curtail the opinion of a player where we would otherwise always wish to see mature players? Because in this case, his opinion does not suit us and we think it is fundamentally wrong?

What would a comparable case be for a German player abroad? Isn’t Deniz Naki a good example of how we react when something similar happens abroad, just “the other way round”?

Where do you draw the line between what’s still allowed and what’s too much?

My answer to most of the above questions is clearly „yes/no”.

Of course, we have to accept his opinion. But we (as a fan scene and as a club) have to take a clear stand against this opinion and, if necessary, draw the necessary consequences, regardless of possible labour law scenarios.

If a player of the FCSP would ever make a positive public statement about the AfD (which is also democratically legitimized), the consequences would hopefully also be clear quickly, even if this would fall under the expression of opinion under labour law.

But we are the FC St.Pauli. While other professional clubs in Germany or other countries would perhaps be able to moderate something like this away more easy or even keep it silent, this will not work at the FC St. Pauli and particularly not in this case.

And that’s a good thing.

For me, it is clear that what Şahin has written falls under “freedom of opinion” and should not even be enough for a warning under labour law.

And nevertheless: I hope that the club knows how to draw the correct consequences – and from my point of view, these consequences can only be that the club, however, keeps on paying Şahin up to the winter break for training only but gets him transferred to somewhere, if necessary also without any reimbursement. And the resulting negative transfer balance, which is due to the once paid 1.3 million must then simply be accounted as “learned the hard way”.

The player himself has now set his Instagram account to “private”. But since there are sure to be enough fans still following him or already followed him before, this is unlikely to change much.

Update: And while I was writing this, the club also published a statement. A good and quick statement for in between, of course, you can and should work on it now in peace and with no further rush.