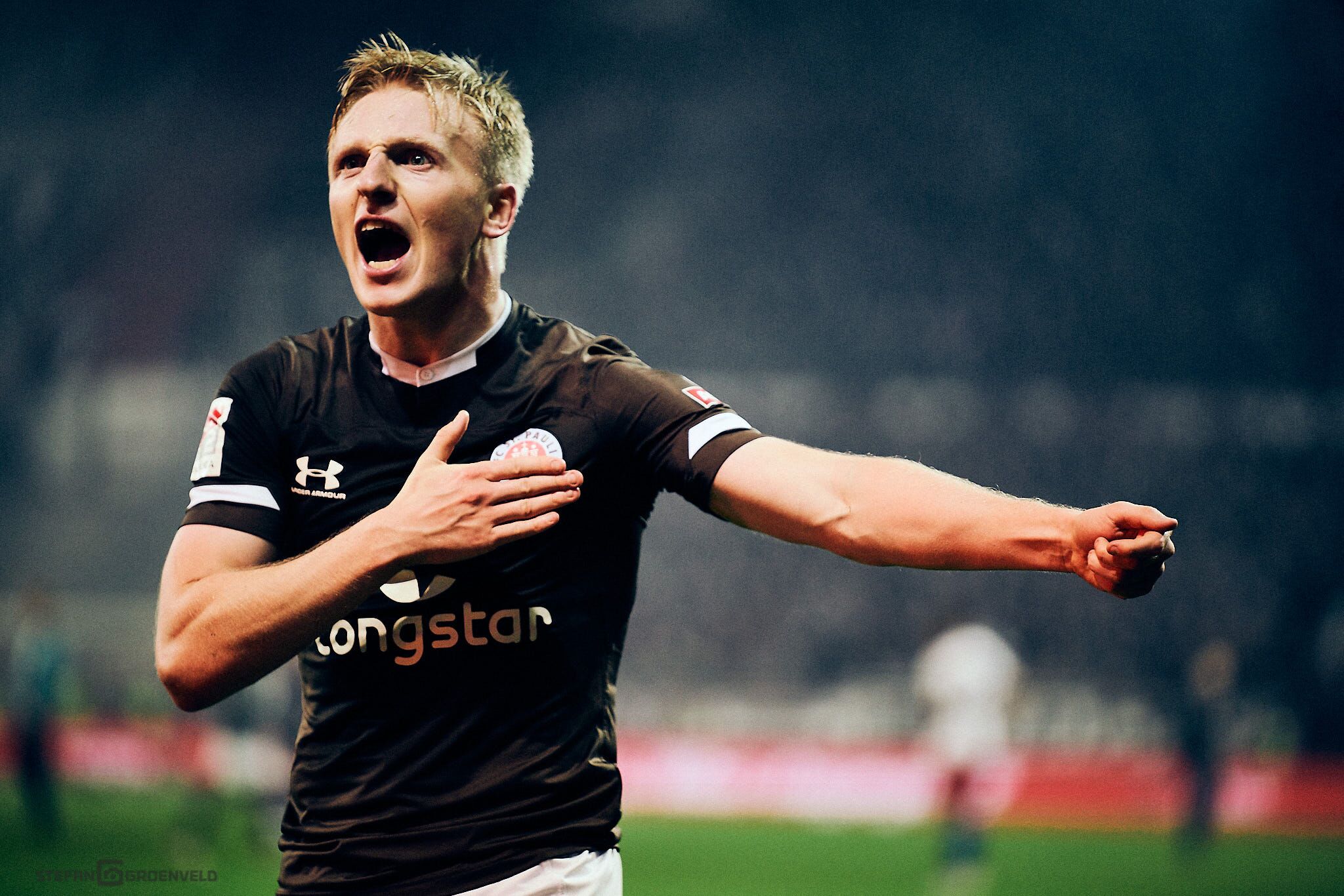 There has barely been another press release which did hit me as hard as the one from yesterday. Mats Møller Dæhli leaves the FCSP and will lace up his boots for the Belgian first division competitor KRC Genk from now on. But Mats is not only leaving the team, no, but it’s also much worse, Mats is leaving US. And this is hurting sooo badly. Sooo badly. I would have thought that this love (yes it is and was love) would allow compromises. Compromises, which would cause that a highly capable player would play for a club which isn’t (yet) highly capable too. The love might stay, even if Mats isn’t wearing our colours any longer. But my heart is nevertheless torn apart.

And this is why I have to do some therapeutically writing now (which, joined by a couple of pints, will lead to a veeery melancholically result). Of course, players come and go. That’s part of the game. Nevertheless, in Mat’s case, there’s more pain than usually involved. He simply was one of us, on as well as next to the pitch. And I have to get rid of this pain somehow. Have to cope with my grief somehow. Have to maybe channel what I’ve been up to and change it into productive hate or simply have to cope that Mats considers other things more important than us. Which is sad.

It was love. A huge love. But what’s love actually worth when it comes to a player and a club in football? Mats did ensure his love to us up to the very end. There has barely been another player who was able to take so many of their supporter’s hearts during the last couple of years. Such a heartbreaker. But why? There are two examples which are clearly proving it: The #1910SmilesofMats hashtag on twitter and the absolute escalation after the derby win. No more evidence needed. But it’s also joined by a constantly good performance on the pitch.

However, the latter is probably the main reason why Mats left the FCSP. Because every one of us had to be sure that his performance wasn’t solely noticed by us but also raised desires at other clubs. Players alike Mats, needle players who are due to the opponent’s pressing able to take the ball even through tight spaces on the pitch, are more than welcome in every other club as well. Additionally, there was his own power with regards to pressing. Mats is an almost perfect player for the deep centre, the space of the eight.

What might be the reason for Mats to leave us without further notice?

For sure, the Belgian division might not be the ultimate division of Europe. Nevertheless is Mats’ step a quantum leap from a sportive perspective. Because the Belgian division has become something like the biggest breeding ground for talent in European football. They play much better football than in our second division there. And another – only superficial – comparison of both squads shows clear differences: According to transfermarkt.de, the squad of the FCSP has a market value of approximately 20 million Euros. The market value of the squad of KRC Genk is valued with more than 120 million Euros. And incidentally, Genk did already play in the Champions League this season. “Sportingly improved“ is a much better match this time than it was with Felix Luz back then (this comparison is anyway a little flawed…). Because even if the club will not qualify for next season’s Champions League (they are currently on 8th position in the table and their manager is Hannes Wolf), the likelihood to play international matches is much bigger than with the FCSP. I am very reluctant to write it but as you all know, we’re only going to play internationally in 2021/22 after winning the DFB Cup next season… you’ll be probably familiar with this estimate because of Maik.

So why shouldn’t a highly capable player use this chance to play at a club which better matches his personal skills? Who can be mad at him?

For 3 years FC St Pauli has been my life. To everyone i have met: Thank you for all the memories. For all conversations. For each game. Home and away. The love you showed the team. Thank you. I have given everything. I am so proud to have played for this club. I will never forget Millerntor. The faces when we won. The respect if we lost. I could see you deeply cared. I did too. Good luck and don’t change. This club is special. But its time for me to leave. This is my decision. I love you all- Mats

To answer this question, I’ll have to enter the world of myths and speculations and would like to point out that it might be completely different. A first explanation could be that Mats is keen to play at the European Cup this summer. After not being considered in the Norwegian national squad for a long time, he was considered for the last internationals in 2019 again. And as the Norwegian team is still able to qualify for the Cup (they’ll face Serbia in the playoffs) he wants to make a good impression in an even better sportive environment now. I am very reluctant to accept it but this would be an understandable explanation.

And the other possible explanations are even more crappy. Even if I cannot really imagine it, Mats could have had some troubles with the sportive director’s board of the FCSP. This would actually be very weird as it was Jos Luhukay, who let Mats play in the centre after he had to face a boring and ineffective existence on the flanks for many years. This change elicited a remarkable push to the better during the last six months. And this with a career which was meanwhile somehow appearing to take a break (an even longer story about the career of Mats until now can be read here). But from my perspective, there’s a slight chance that not all players get along with Jos Luhukay. But taken the massive improvements under Luhukay into account, it’s rather unlikely to name this as a valid reason.

Next explanation: Barely anyone of us is actually able to understand all the mechanisms in football, especially on the transfer market. But ‘Football Leaks‘ always brings things to light that take away the desire for professional football. And this is awkwardly oftentimes due to player’s advisers. While Jorge Mendes and Mino Raiola are well-known amongst football aficionados, the name of Jim Solbakken is rather only familiar to a few. Jim Solbakken is without exaggerating the most powerful person in Norwegian football. And he’s pugnaciously, too. Almost half of the Norwegian national players are amongst his clients (even the super talent Erling Haaland). And another eight players of the current Norwegian champion Molde FK are his clients, too. So you might well imagine, how powerful such advisers can be towards teams. And besides the transfer of Mats, there was another transfer announced by KRC Genk this year: Kristian Thorstvedt will be transferred for 1.5 million Euros from Viking FK to Genk. A deal done by: Jim Solbakken. And of course, player’s advisers have a huge interest in high transfer fees because they are making their money from it. And somehow, I do not want to know what might have happened in this regard. But the FCSP has to deal with such powerful advisers. Especially with Solbakken, as he has another important player for us amongst his clients: Leo Østigård .

So there’s another explanation left which might have caused Mats’ desire to change the club: the sportive stagnation at the Millerntor (table-wise). Because it’s rather unlikely that we get promoted this season (*coughin’, instead we might have to look at another region of the table). Of course, we’re definitely playing much better football than in previous years now, which might also be due to Mats’ relocation to the centre. But this fact in combination with the beautiful Hanseatic town we’re living in is obviously not enough if you’re able to play in even better sportive environments as a player. However, this was obvious to me, but I did hope that his love for us might somehow close the gap between possibilities and realities.

But he ditched us.

What remains for the FCSP?

For sure, Mats wasn’t transferred to Belgium for a bouquet of flowers and a greeting card. Well, the exact sum of the transfer is yet unknown but the club mentioned a clause in his contract which would have come to effect in summer and would have meant that Mats could have left the club for even less money. And as mentioned in the press release, it was Mats’ own desire to change the club, so it’s pretty difficult from our club’s perspective to hold him here. Because players are simply too powerful or simply able to rule in their own favour. But there are also teams like Augsburg, which put particularly high transfer sums for pre-mature changes as clauses in their respective contracts and simply deny their players their wish for a transfer if the asked-for transfer fee isn’t paid. And this causes transfer-dramas like the ones with Martin Hinteregger or Michael Gregoritsch. And eventually, players will put particular thoughts into the question now whether they are really keen to play for Augsburg in the future. So the only chance for the clubs is to join the transfer tango. And this is what the FCSP did and earned for sure a few more quid than a transfer in the next summer would have paid.

It’s hard to tell, how big the sportive loss will be. For sure, Mats was an outstanding player in the second division. But the FCSP did win the last two matches even without him. I cannot tell at all, how much he was worth for the team next to the pitch. Of course, over Christmas, I put some thoughts into the idea to get rid of some central players of the squad. But the fact that it’s Mats now, who was sacrificed, is making it a lot difficult. Because he actually would need to be substituted adequately. But first and foremost, you’ll have to find someone like him.

What remains is my broken heart, Mats. It’s not that easy to fix. How dare you? In the winter break. Without prior announcement. It specifically hurts, Apparently, I had the lunatic idea that you would be different. Nevertheless, I am wishing you all the best and really hope that you’ll be able to earn the same amount of love in Genk as you did here.

Besides, other blogs wrote: