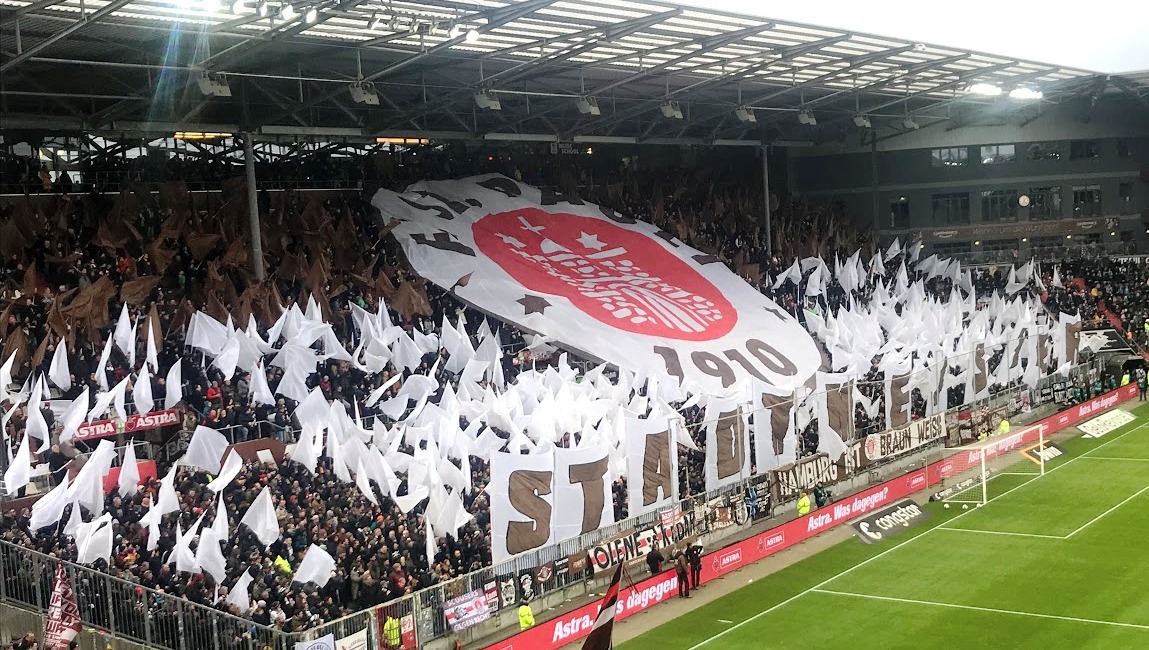 The win in the derby is still echoing. We hope it will continue doing so for a long time. While in the previous season, wins in the derby appeared to be cursed, I consider the results of the weekend as the opposite. The FCSP wins a match not just because it started with the same starting squad as in the derby, it also won the match because of a similar attitude (while the opposite was true for what happened in Aue). Finally, we could make use of our own performance in emotional matches against opponents who are of mediocre attractivity only (however, the wording “derby of the north” is still only used by the audience of NDR 2 [a radio station in northern Germany]).

And completely deserved, we hugely celebrated the win in the derby in our first home match after defending the title of the town’s champions. We all deserved it. And the tifo was simply astonishing:

Actually, the VfL Osnabrück is a member of the category “unpleasant”. However, it became clear already during the first half that we could get rid of such categories if we entirely focus on the important only. The FCSP started, as already mentioned earlier, in the same starting line-up as in the derby which was a 3-5-2 ( or a 3-1-4-2 as Benatelli was clearly playing on the six). This formation performed in a much more firm attitude than in the derby, however, there was a clear imbalance on the attacking positions (it was rather to be named a 4-2-4, but we’ll come back to that later). The hand-over of the respective players and in general the positioning while Pressing was really excellent from the very beginning.

The VfL Osnabrück positioned themselves in a rather untypical 3-4-3 formation as they usually performed with a back-line of four for the entire season. And exactly this back-line of three caused some real problems for Osnabrück. Because the FCSP did have a rather simple but absolutely effective plan whenever Osnabrück was in ball possession: The formation of Osnabrück was mirrored. By doing that, Sobota moved up to the front line between Veerman and Diamantakos (and thus also created a 3-4-3). This caused some tight spaces whenever Osnabrück was in ball possession, a high  Pressing and plenty of long balls which ended up on Leo Østigårds head.

Offensively, the FCSP did also offer plenty during the first half, namely Marvin Knoll on the pitch performing the best way possible. One could almost call him an attacking midfielder as he joined the front row oftentimes. This especially allowed Diamantakos to detour to the left without leaving the central spaces behind Veerman blank. Or it was Knoll himself who covered the space on the left. When performing like this, Knoll was completely right named a free radical within the commentary section of this webpage. Difficult to defend as his free movements behind the front line allowed him to escape from the defensive order of the opponent. In my opinion, Knoll was not just because of his two assists one of the decisive factors of the match.

The positioning of Knoll also caused an unequal way of playing of our both wing-backs Miyaichi and Penney. While Miyaichi was also moving to the front whenever the FCSP was in ball possession, the space on the left wing was already covered by Knoll or Diamantakos which caused Penney to only seldom move to the front.

The plan to mirror when defending and the moving of Knoll to the front when attacking worked out well. The FCSP lead completely deserved with 2-0 at half time. So, again a good match plan of the team of coaches. The high positioning of the FCSP is paying back well and is also a hard to solve formation for the opponents. Painful, both literally as well as for the team was the injury of  Henk Veerman shortly before the half-time whistle. We have to keep up our hopes that this will not be another longterm injury ( the MRI examination will take place today). Henk is simply irreplaceable and so bloody important for the play of the FCSP as he is meanwhile able to keep more than one defender busy (and they still don’t get him defended…)

But what can a team whose positioning is mirrored actually do? One has to build a formation which an opponent can no longer afford to mirror. Osnabrück’s coach Daniel Thioune did the right changes for the second half as he mainly changed two things:

1. He built a back-line of four. If still mirrored, this would have meant high risk for the FCSP as it would have needed now four and no longer just three in the very front line to keep up the mirroring.

2. The wingers Henning and Ouhaim positioned themselves not as close to the central striker Girth any longer but much closer to the side-lines. Thus, the man-oriented line of three of the FCSP was stretched to a maximum which made a back-line of four necessary now (because otherwise, there would have been too much space in the centre).

So it was Penney who dropped into the back-line which caused a defensive 4-3-3 formation of the FCSP. By the way, it was not the first time that an opponent’s team reacted in this way to the formation of the FCSP. The similarity to the home match against Arminia Bielefeld was enormously, even though Arminia’s coach Uwe Neuhaus did change the positioning of his team already during the first half while Thioune waited until the second half.

The FCSP returned from the locker room just like a team with a 2-0 in the back is supposed to return, they pulled out another hammer and scored the 3-0. Bam! But like the heaven above the ground changed of which in no time all kinds of rain poured down, the match on the pitch changed. Because Osnabrück had much more to offer now compared to the first half and played some appealing combinations. Firstly, it was their captain Blacha who joined the back-line of four as a right wing-back. While Heyer, who played as a right central defender during the first half, now played in front of the defense. Köhler somehow rotated in between on the half-right. At the latest when offensive player Henning appeared between the central defenders during built-up play and when Schmidt was on the pith (I am really surprised that he was only substituted later as in my opinion, he was a really strong player that day), Wolf and I stopped to note down positions of the players to better perform our afm-radio coverage. Another right measure to the man-to-man marking of the FCSP was to start massive rotations of the entire squad. Because now the FCSP players were forced to decide whether they should follow their opponents or not. So, a lot more communication and adjustment was needed now compared to the first half.

Thus, the defensive play of the FCSP was now completely challenged. As a result, a much better VfL Osnabrück scored the 3-1, however, rather late and in a very shitty manner. So, we were forced to focus a little longer. Which would not have been necessary if we would have been able to score successfully in one of the plenty of transitions moments. Emblematically performed Waldemar Sobota who was fouled in a one-to-one situation with goalie Kühn by his own standing leg.

And with 29 points we were able to slightly embark to the midfield of the league’s table. But the number of points and the position in the table is deceptive, the next match against Sandhausen will be another hard one. Keep on pushing to the front!

I just love you @henk_veerman ❤️

It was another no-brainer that after what happened on Saturday [in the Bundesliga in Hoffenheim] some more banners would be produced for the stands. Without hesitation, we share the shown banners: On the north stands a banner showed: “Matches are interrupted for huffy patrons but racism is still ignored. Fuck you DFB!”The south stand showed: “Racism? Sexism? Homophobia? No fuck’s given!– But for modern football, you care! Fuck you!” And while plenty of  Sunday’s matches were interrupted because of banners and chants pointing at the cause Hopp, nothing like that was true for the Millerntor. And director of sports Andreas Bornemann did sum it up quite goodly (as heard in the NDR radio): “The fans demand that the consequences drawn in Sinsheim are transferred to any other insulting topic at any other club and for all humans at best.”

And at the end of the week of the derby win, the march of the derby winners was happening, accompanied by unbelievably high crowds of police under armour so that one could get the impression we would have lost the derby and thus announced batches of violence for all mankind. Unbelievable. Anyway, a worthy ending.

But to point it out clearly: The derby-attitude of the team should become the norm! Too often we were forced to witness that only one percent less of commitment, will, etc. leads to only a few or even no points. And this should have become clear for everyone by now. Because this is the only way to collect further points. Until we have 40 of those, we collect them against relegation and if we continue to collect them, we might even use them against Jos’ promise of the beginning of the season that we should be happy if we make a ninth place in the league’s table at the end of the season.

Photos (also of the tifo, rain and the banners) by Stefan Groenveld: Derbyfluch besiegt

3 thoughts on “Pushing some more!”