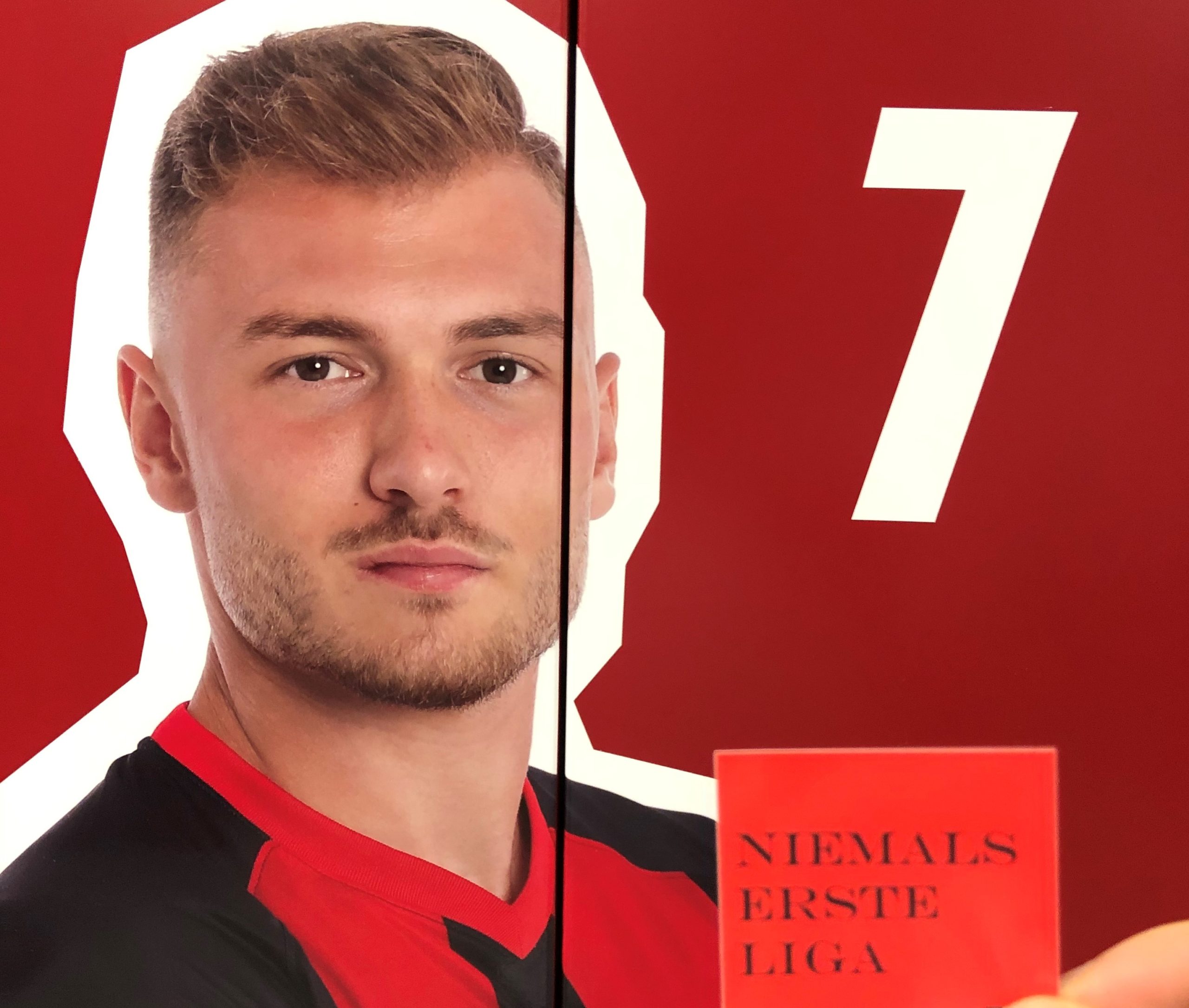 The FCSP contracted Maximilian Dittgen . He will transfer without additional fees from the SV Wehen Wiesbaden to the Millerntor and will get a contract until the end of the 21/22 season. Dittgen will be a support for the left flank of the FCSP. As only two days earlier, the signing of Leart Paqarada got public, it appears very likely that there will be a completely newly designed left flank.

And again, before focussing on the footballing skills, I’ll have to check out his Instagram account. Well, all I can say is that we’ll be amongst the leading teams in this regard from now on. But this is not due to Maximilian, but rather due to Anette, the mother of his daughter. Holy cow, how much I could already find out after some brief research… Maximilian and Anette did meet almost ten years ago on the funfair of Moers (nothing can top that!!!). Actually, Maximilian Dittgen has a tattoo spread over his entire chest and they celebrate her daughter’s six-month anniversary! And with this pic, they would have clearly won our Christmas-tree-Special, even though the tree might have been photoshopped. I think they even bet my beloved Ginczek family in this regard. And Anette did already announce a couple of days ago that they gonna move somewhere else soon:

But let’s leave it for now with my appreciation of their Instagram-accounts. He’s supposed to play football for us. It proved very convenient that Dittgen, as Kyereh before was transferred from the SV Wehen Wiesbaden to the FCSP because I could again send my questions to Gunnar of the stehblog who has now answered them with his usual professional expertise.

Moin Gunnar, Maximilian Dittgen transfers from SV Wehen Wiesbaden to FCSP. Is this transfer a good fit from your perspective?
Well, already when Kofi Kyereh transferred, I actually had no idea how to assess that. However, Dittgen ist a good runner and willing to fight, that should please the Millerntor as well.

Timo Schultz especially emphasised his speed in the press release – What kind of player is Maximilian Dittgen on the pitch?
The speed is definitely his biggest strength, additionally, he has a good technique which allows him to escape from tight spaces.

And which of his skills on and next to the pitch would you describe as improvable?
Well, from time to time we got the impression that he was able to change from Bundesliga to community league within the same scene: First he uses his speed and dribbles past the opponent to then flank the ball behind the goal or he simply walked through two opponents to simply smash the ball over the stand’s roof, or he managed to win the ball very strongly in the own half to then simply pass the ball over the side-line. As his biggest construction site, I would name his skills to finish. This is when I sometimes got very desperate watching him – but nevertheless he managed to score a great goal during last year’s playoffs which even happened with his weaker right foot.
Next to the pitch? I have no idea! Before he played for SVWW, he had a TV-team from VOX capturing his wedding preparations which triggered a lot of cringe factor and on Instagram, he sends love letters to his wife every now and then. But besides that, I did not notice anything further. – I really hope that this is satisfying for your readers who demanded more tabloid content for this blog. ?

Dittgen did perform predominantly as a left midfielder during the last season but sometimes also as a left wing-back (e.g. during the match at the Millerntor). In the previous season, he even played more often as a wing-back. – Which position is the better fit for him?
It has some tradition at our club that we develop offensive wingers to wing-backs. And during the previous season, when Jules Schwadorf performed outstandingly,  Dittgen sometimes moved to the wing-back position. But I rather see him as an offensive player. A couple of times, he also played in the centre but most of the time I didn’t like it.

In your answers to Daniel-Kofi Kyereh you mentioned that Kofi
didn’t manage to beat Maximilian Dittgen. Why not?
On the left flank, Dittgen, with his strong left foot, has some advantage compared to a right-footed Kyereh (unless you have Ribery and Robben in the squad). When both played together on the flanks, they sometimes changed their positions, but Dittgen appears to feel much more comfortable on the left flank.

For an offensive player, the bare statistics (last season: three goals and two assists) are quite okay but they are not outstanding. Is this a lack of quality, or was the focus on Kyereh and Schäffler rather the reason for this ratio?
As stated earlier, Dittgen’s trademark-goal attempt ten metres above the bar almost became a running gag. But in terms of his assists, I am quite surprised. I would have assumed them to be more. It would be interesting to get statistics about the penultimate passes before goals or how many attempts were initiated via the left flank no matter if they turned into a goal or not. Purely intuitively, without having numbers at hand, I would say that Dittgen was quite a bit involved in this regard.

16/17 Regional division, then two years in the third division, now in the second division – do you think there’s even the chance for more?
Difficult. On the one hand, there were plenty of scenes (see above) where you could clearly see why he was only playing for SVWW but on the other hand, I always thought that he performed the better the stronger his opponents were. But in general, I have my doubts that he would be fit for the first division.

Thanks a lot, Gunnar!

Thus, the FCSP completely refurbished its left flank. This was pretty necessary after the last season when Buballa rather joined the centre, Conteh was permanently injured and Gyökeres perceived himself rather to be a striker. And if we keep the answers of Gunnar in mind, with Maximilian Dittgen the FCSP again contracted a player of whom we can expect some good things. However, it’s getting pretty obvious lately that the FCSP eventually realised that especially on the flanks, speed trumps every other skills. And I like that.

Welcome to the Millerntor, Maximilian Dittgen!

6 thoughts on “Who is Maximilian Dittgen? – A player’s profile”