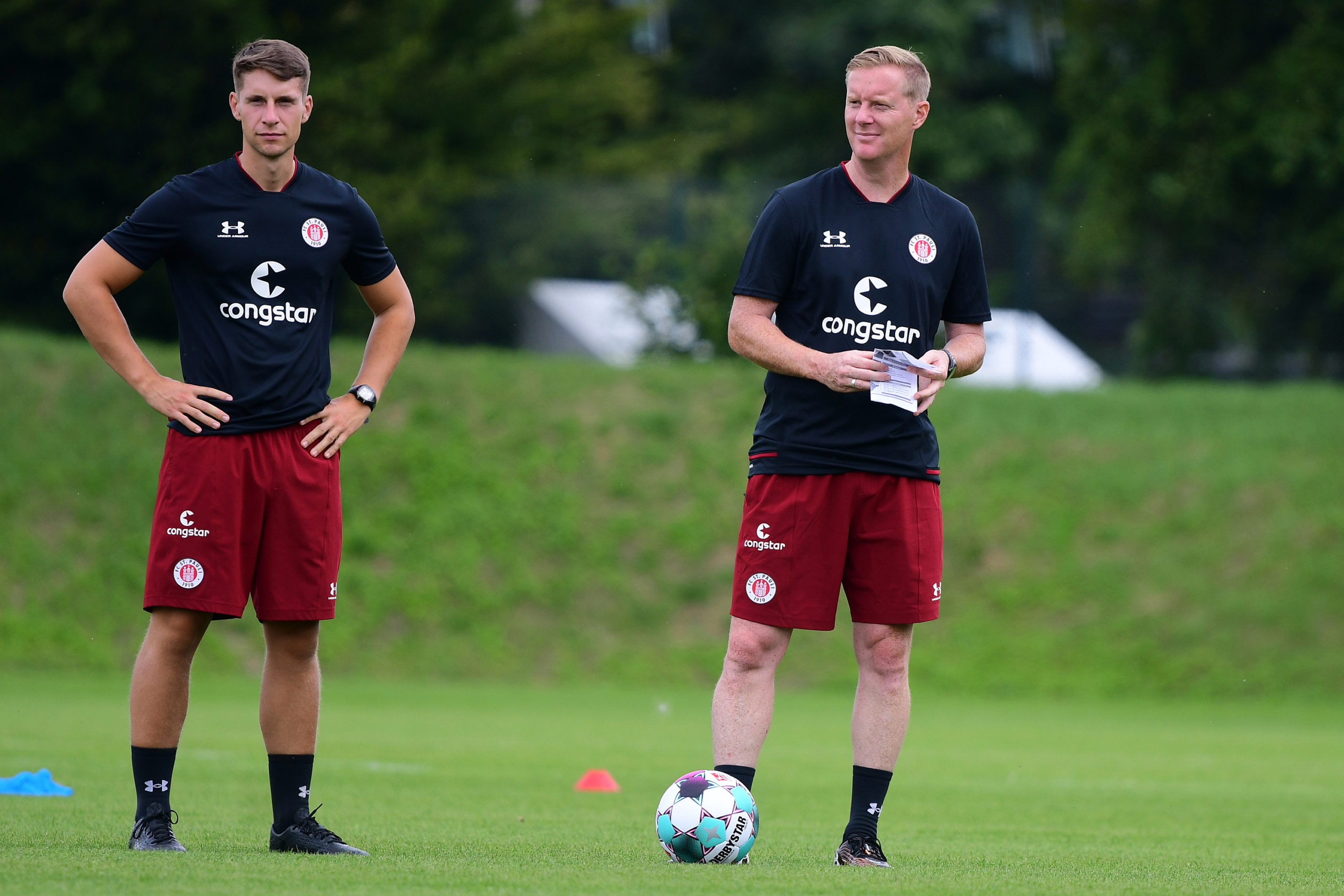 Not just amongst the player’s squad but also on the coach’s bench, the FCSP did almost change completely for the upcoming season. Next to the newly appointed head coach Timo Schultz, there are also two new assistant coaches: We did already introduce Fabian Hürzeler. The second one is Loïc Favé, who should be well-known amongst the connoisseurs of Hamburg’s amateur football. Namely, as the more than successful youth coach and coordinator at ETV.
(Cover picture: Peter Boehmer)

Although Loïc Favé is just 27 years old, he could already earn some laurels as a football coach: With being the youth coach of ETV there was only one direction for his teams: up, the last station was now the U19-Bundesliga which is nothing less than a major success for an amateur’s football club from Hamburg. And he accomplished the same with the U17 a year earlier. And besides that, the a-licence holder was also the youth coordinator at ETV, a DFB-base coach, additionally, he authored a book and developed new training-accessories. Regardless of his age, Loïc Favé appears to be a coach of a certain quality.

To get to know Loïc Favé a little bit better, I did ask Jasper Hölscher a few questions who is following Favé as a youth coordinator at ETV:

Jasper, Loïc Favé is the new assistant coach at FC St. Pauli. Did this step come as a surprise for you?
To be honest, not really. During the last five years, Loïc did constantly raise attention through his brilliant work as a youth coach. At the same time, he managed to raise the youth squads of the ETV to a new level as a youth coordinator. It wasn’t for the first time only this year that his qualities got interesting for other clubs. Of course, Loïc did not work as a coach on senior-level before but due to his top-level experiences as a coach for youth clubs and his long career as a coach of the Hamburg’s Selection Squad, he did accompany many players who changed into professional or semi-professional football. Due to our close cooperation, I realised that Loïc was permanently dealing and in constant exchange with actors from professional clubs.

And do you think this step is the right one?
Definitely. As already stated, it’s, in my opinion, the next logical step in Loïc’s career and the exact right time to do so. However, for ETV it’s, of course, a huge loss. Although we were all very happy for him, we have to be honest that we’re also losing a brilliant coach, coordinator and human being. However, the concept of Favé which he built up during the last couple of years is planned as a long-term and sustainable one and does not depend on a single individual. Furthermore, we have many very engaged coaches in our department who are willing to take on more responsibility and who are keen to develop the football of ETV further.

What do you think are the areas for which Loïc Favé could be a huge benefit for the FCSP?
I think Loïc will add all of his skills to the FCSP and will do everything to develop the club further. Whenever he does something, it’s always with 100% focus and passion and this will also pay out in his new role now and I think the club will have a great time with Loïc ahead.

Favé is described as a huge trainer talent in many places. What makes him so special?
As already stated, I think it’s the combination of a huge football-specific competence, his leadership skills and his will to constantly develop both as an individual and also together with his team. His eagerness and his basic engagement are typical for Loïc and due to the regular exchange with other coaches and officials from the top departments he could constantly enlarge his coaching skills. I think it was also of help for him that he was always head coach at ETV and that he could test his ideas and insights with his teams on a high level already without being stuck to firm specifications or rigid systems.

What’s typical of the football of those teams coached by Favé?
The variability and adaptability. Loïc accomplishes to develop players in his teams who have a good perception and can make good decisions with regard to their opponents and the specific situation on the pitch. Loïc’s teams are characteristic of a huge capability to play and thus they can play varying systems and orientations. In general, there’s always high intensity, enthusiasm and activity detectable in Favé’s teams.

There are many types of coaches. There are presenters, animators, generals and motivators to address the players. To which category would you assign Loïc?
Loïc is rather calm and objective but also rhetorically strong and he convinces his players through a lot of quality and details in his addresses. Thus, I would assign him to the category of motivator but not as the classic emotional motivator. Loic rather motivates his players through very high expectations and his passion for the football. But he can also raise his voice and be more straight forward when he’s not too happy about certain things.

Are there any areas in which Favé still can improve?
Of course, there’s always something to improve and Loïc has the opinion that everyone can constantly improve and be better. But I think that I’m the wrong person to judge which area for improvement comes first – but he can certainly add more to that.

You did cooperate for several years with Favé. What did you learn from him?
Well, I think I have to name quite a few things. I am a coach for ten years now and Loïc did influence my development decisively. Next to the training-specific aspects such as how to run a training session, coaching and tactical principles, I would say that Loïc was most helpful to develop my leading skills with regards to individuals and teams. Loïc provided a lot of input in terms of how to deal with different types of players, a group and the individual characters in a team and first and foremost he was always a role model in terms of leading.  And what I also learned is the unconditional ambition to improve and being able to control every tiny detail at its best while always being humble and modest at the same time.

Frankly spoken: How much does the transfer of Loïc Favé hurt ETV?
As stated, we have mixed feelings. I personally, and I think also my colleagues, we’re all very happy for Loïc than sad that he’s leaving. We all know how much he did and invest for our club and we are very thankful for that. From a sportive aspect, the transfer does hurt a lot of course.

And how will you continue now?
Hopefully with playing football soon again.
Our identity, the culture and the sportive concept were already implanted deeply into our squads of coaches and the individual teams and we will really aim to keep the direction we headed to during the last years. Staff wise, I will be appointed to fill the position as a youth coordinator and I will try to develop the department to the best of my possibilities. I also believe that it will take quite some time until we’re back in a routine and the new structures become firm. But the mood in the department is really positive and I take this as some sort of atmosphere of departure.

Jasper, thanks a lot for all your answers and best of luck at ETV!

Of course, we’ll have to wait until we can find out how Loïc Favé will perform in his new role as an assistant coach (and not being head coach any longer) and to which areas he can add his skills to. But it’s already obvious that the FCSP did not appoint Favé as a  “cone positioner“ and “phrase monger“ into his coach squad. And it’ll be interesting to see how he (as well as Timo Schultz) will adapt from youth football to senior football and if they can transfer their concepts to this area as planned. But definitely, the FCSP did sign two very big talents as assistant coaches now who will probably be head coaches at the sideline of professional clubs themselves sooner or later…

Welcome at the Millerntor, Loïc Favé!