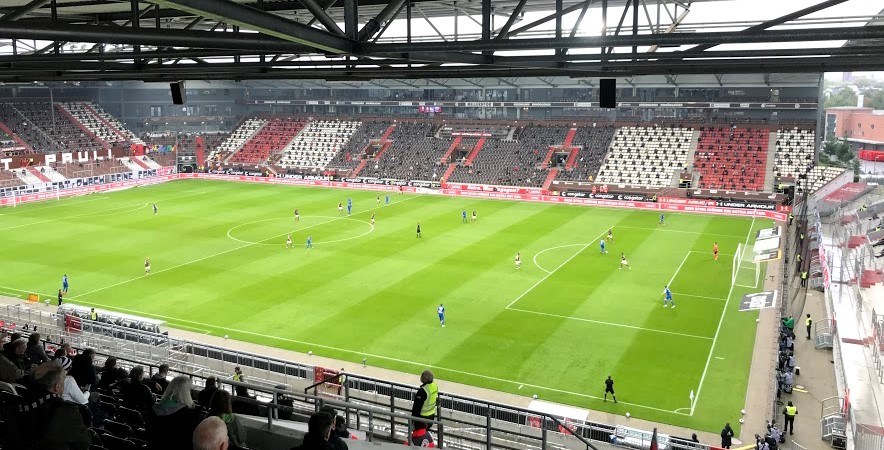 ATTENTION: This article does not contain anything about actual football. If you’re keen to read the tactical analysis, you’ll have to wait for Tim’s article read Tim’s article. This is about anything else.
Everyone or nobody? is no longer an option.
So the remaining question is whether one wants to see whatever’s currently happening or not.
A clear answer from myself: Yope. Not really, but it’s better than nothing.

Ticket sale
For sure, one can start endless discussions now but as already mentioned in Friday’s state of the club article, this was just a first trial of how to somehow start again. It’s pretty obvious (especially with a very limited number of available tickets and the very short notice of the city’s authorities) to only allow season or annual ticket holders to apply for tickets this time – and also hopefully offer a somewhat more sustainable solution for the next home fixture or match after this fixture.
So hopefully it will be sorted in the meantime whether persons of the same household can apply for seats next to each other (this would then also allow a higher total number of tickets sold because these people don’t need to abide by any social distancing rules), whether in addition to annual or season ticket holders also members or holders of away season tickets can apply for the ticket raffle, or whether those who did not get a ticket for one of the last matches will be advantaged in future raffles.
For the recent match and with regard to the circumstances, it appeared as if everything worked out pretty well, although some received their confirming e-mails in their spam folder while others (e.g. Google users) found this email in their advertisement folder, however, eventually, the process of the actual ticket sale from Friday 10 am onwards seemed to have worked out for everyone. Seats could be individually chosen from the seating-plan, with a little coordination, some actually managed to book seats located next to each other, of course, while still respecting the safe distance of two empty seats between each other.

Organisation / Hygiene concept
I travelled to the stadium by car.
At the turnstiles, lines on the floor would have facilitated social distancing in case of emerging queues. But this wasn’t even necessary (at least at the Gegengerade turnstiles) for most of the time, however, if needed it worked out fine. At the respective turnstiles, stewards started to check IDs already 3 to 4 meters before the respective turnstile to add even more relaxation for the queues.
From the moment one entered the stadium until the respective seat was reached, face coverings were mandatory which also worked fine and was followed in a very disciplined manner. At the seat, no face coverings had to be worn.
Food stands remained closed, beverages were sold by individual selling staff who carried bottle crates from which they sold their non-alcoholic bevvies.
The facilities were open, however, in the Gegengerade they were run as unisex-toilets because otherwise, the block allocation would not have worked out as planned. Restrooms in all other areas were open as usual.
The seats that weren’t supposed to be used were marked with a red sticker. During halftime, spectators could meet in the back area of the Gegengerade (although this was only possible per block only), hereby, again, the use of face coverings was enforced, except for those craving for a cigarette.
But will this also work when there are no longer 2.200 spectators only but 6.000? Probably, although with minor adaptions, particularly the availability of seat packages for persons of the same household or similar would be beneficial, although the safe distance (and thus empty seats in between) has to be adapted in such cases to allow enough distance to foreign spectators.

Atmosphere
First things first: This is absolutely not even close to how I would wish a stadium visit to look like. Not close to how I remember the Millerntor and how I love it. And it will stay like this for many more months to come.

So, the question everyone has to answer is: Do I want it like this, it’s at least better than nothing or do I don’t want this and thus will wait until everything is back to normal again, what -as it is for now – will probably not change for the rest of the season.
This is something everyone has to decide individually, I myself did already decide at a very early stage that I somehow value the idea of “everybody or nobody” but that I cannot wait for this to happen. I would join in solidarity if this would have been a common decision of the fan-scene but in every single of the active fan groups, there are some fans who want to be back in the stadium asap and others who don’t.
If the DFL would have decided for a general ban of fans for health reasons, I would have welcomed it absolutely (welcome a ban, look how far I got already!) but when some people were allowed back in the stadium, I quickly decided that I wanted to be amongst those people. Or to give it a try at least.
And when the team was back on the pitch to warm up yesterday and the stands slowly cheered a „Sankt Pauli! Sankt Pauli“ which reluctantly got louder and louder, I knew that I had taken the right decision for me. This was actually what I missed.
Hells Bells were played – but this wasn’t as usual, rather sterile. Because the Heidenheim players were already on the pitch.
And I had my doubts when the “Aux armes“ started. After the common statement of the active fan scene, I had decided to rather not sing along because for me it’s simply a ritual which has to start on the south stands and somehow this chants sounded so much weirder in the stadium yesterday than any other chant before and after that. But Justus did also say after the match that this is a must at a match of the FCSP for some and thus some longed for this ritual – so it’s again something everyone has to decide individually.
During the match, there was, of course, no continuous support but rather more often applause for individual scenes and every now and then some chants and cheers which started from everywhere but which weren’t kept alive for long either.
But there was definitely “more atmosphere” than I would have previously thought. This might also have been due to the course of the match on the pitch, but as already stated, I liked it. Of course, with the given circumstances in mind.
Others didn’t like it and my wife stated yesterday evening that she would take a rain check on stadium visits until at least 50 per cent of spectators would be allowed back into the stadium.

Conclusion
Would  I apply for tickets again if they are raffled for future matches?
Yes.
Not because I could particularly appreciate this kind of stadium experience but because I am so much less of a nervous wreck when inside the stadium rather than in front of the AFM-radio or the news ticker only. I see what’s happening, I can scream, swear or cheer – all these kind of things work so much better when I am in the stadium.
But of course, I am also longing for the moment when this whole crap is over and we will announce “Sold out” only when all 29.546 spectators are back – with filled visiting stands and all the other stuff.
Until this is actually the case, I hope that the incidence rate will remain low so that we can raise the stadium capacity back to normal step by step. And yes, I will visit again, whenever it’s possible for me.