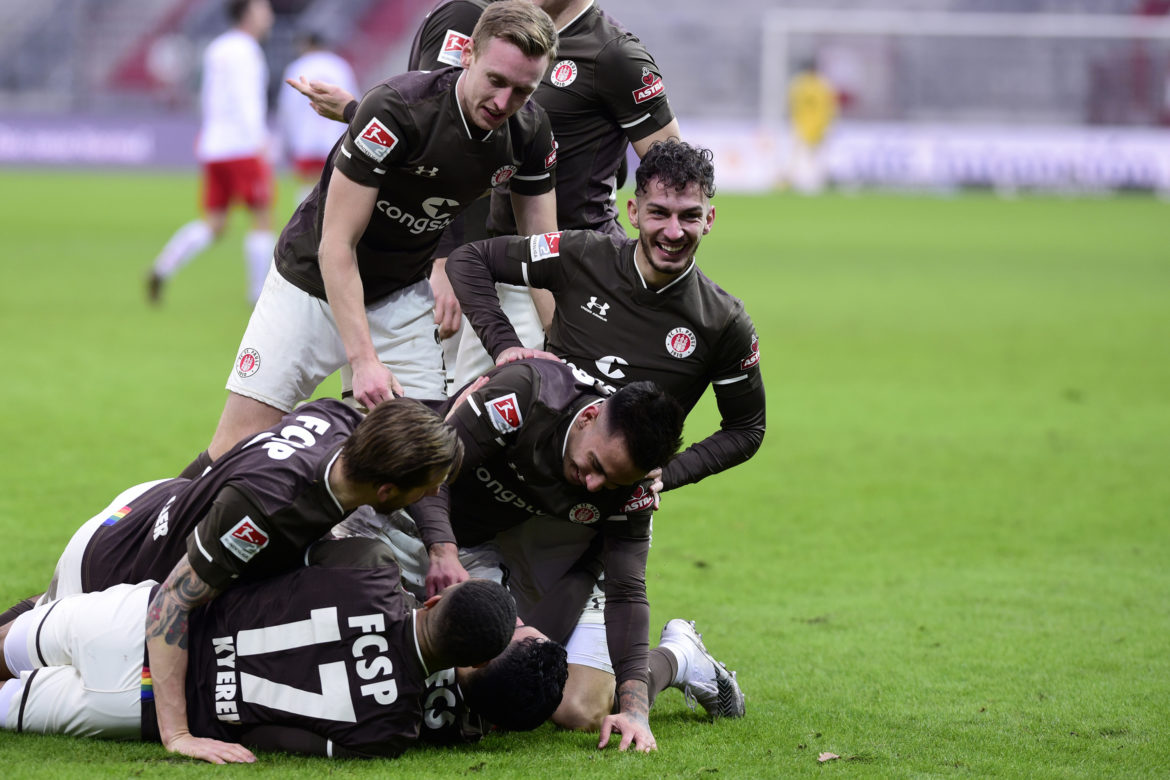 FC St. Pauli wins against Jahn Regensburg with 2-0. Although the match had many chaotic moments as expected, the FCSP controlled large parts as they scored goals at the right moments. Thus, in the end, there was the first to-nil game of the season. Very strong!

As expected, there were no changes in the starting line-up of the FCSP. There was no real reason to make a change, especially since Eric Smith was not even part of the squad and accordingly is probably not yet ready for action on the pitch.

SSV Jahn Regensburg made only one change compared to the home win against SV Sandhausen: Scott Kennedy started instead of Sebastian Nachreiner. Jahn coach Mersad Selimbegovic had already made this change at half-time against Sandhausen.

Defensively, the FCSP set up in a 4-3-3. Daniel-Kofi Kyereh moved up between Marmoush and Burgstaller, often concentrating on central defensive midfielder Benedikt Gimber, who was always dropping (although he did not play as man-oriented as he did against Hannover or Kiel).

The decisive duels then took place on the flanks. Here the allocation was relatively clear, but Jahn Regensburg tried, again and again, to create spaces through running movements: The offensive wingers tried, again and again, to take the FCSP wingbacks with them by diagonal backward movements into the centre, so that their own wingers could reach this free space. In the first half, however, the duos Ohlsson/Becker and Paqarada/Zalazar coordinated quite well, so that hardly any dangerous situations arose.

Whenever FC St. Pauli was in ball possession, SSV Jahn Regensburg acted similarly and mirrored FCSP’s formation for the most part. However, they left a remarkable amount of space in the high pressing in the centre, where mainly Benatelli was free. To me, it looked as if this was a kind of goal corridor into which FCSP should play the ball. Because as soon as Benatelli received a pass there, the Jahn eleven woke up from their previously high staggering and began to aggressively run at the players.

In deep pressing, Regensburg then offered a 4-4-2, albeit with strong man-orientation in the line of midfielders. The deep pressing was then mainly seen in the later stages of the first half, when FCSP were able to generate more and more possession.

Right from the start, the match offered exactly what was to be expected beforehand: Nowhere on the pitch did neither one team nor the other allow themselves longer periods of possession.

It was only after about ten minutes that there was something like control of the game, which FCSP got. But that was not because Regensburg gave it a bit more space, it was because FCSP had a rate of won duels of 60% in the first half.

Nevertheless: Compared to previous games, the orderly build-up of the game came far too short. It was rather a cramp, which is not surprising with so many direct duels on the pitch (due to the mirroring of the opponent’s formation). But in contrast to many, many matches against such opponents in previous years, where FCSP tried to solve the situations playfully, FCSP took up the fight perfectly prepared for this style of play.

And as it goes in such matches, it is a set piece that brings the lead: Already a few minutes earlier, the FCSP played a clearly rehearsed free-kick from the half field onto the second post, but neither the standard shooter nor the passer could play the balls accurately.

It worked out better though in the 27th minute when Zalazar found Kyereh (who broke away nicely and was well blocked by Ohlsson) at the second post, who then skilfully slid the ball into the centre to the completely blank Burgstaller. Strong variation!

It was a really focused performance by FCSP over the entire 90 minutes (if we don’t count the first three minutes of the second half), not only because of the lead. Only the work on 2nd balls and in transition situations could be improved, but Regensburg had a great focus on that.

In the end, FCSP had 14 fouls, Jahn Regensburg 19. The average in the division is 13 fouls per team and game. Accordingly, there was little flow to the game.

Goals at just the right times

Regensburg then came out of the half-time break with massive steam and had several good finishes, including a ball against the post. With the first offensive action in the second half, however, the FCSP took a 2-0 lead. Marmoush’s acceleration in the first few metres, even with the ball, is simply impossible for second division players to defend over 90 minutes. A clear difference-maker.

Nevertheless, the SSV Jahn Regensburg was clearly more present in the first 15 minutes of the second half. I don’t have the statistics at hand to break it down by half-time, but I would say that FCSP won far fewer direct duels in the second half.

But even though Regensburg was more present, the FCSP never seemed to get into trouble, also because they were able to dangerously elicit their transition play again and again.

With the score at 2-0, the FCSP was able to pull back a little and occupy the space defensively a little better. SSV Jahn Regensburg had little chance to create chances.

FC St. Pauli controlled the game and by the 80th minute at the latest, it was clear to everyone that it could actually be enough to win the first game to nil this season. The formation and the players seemed too concentrated and too stable. Once again, it became clear how important it is for a team to be able to start several games with an identical or only slightly different line-up. The FCSP appears as if it has now found its formation.

Thanks to eight points from the last four games, the FCSP has finally jumped back above the line (also thanks to the defeat at Braunschweig and the draw at Sandhausen). Who would have thought that after the defeat at Fürth at the beginning of the year? This is not yet a reason to relax, but it shows that the decisions of the last weeks and months are now slowly bearing fruit. FC St. Pauli has just launched the “series” Timo Schultz wanted. It can then gladly end after the next 17 games.

6 thoughts on “FC St. Pauli vs. SSV Jahn Regensburg. Emperor of the chaos!”