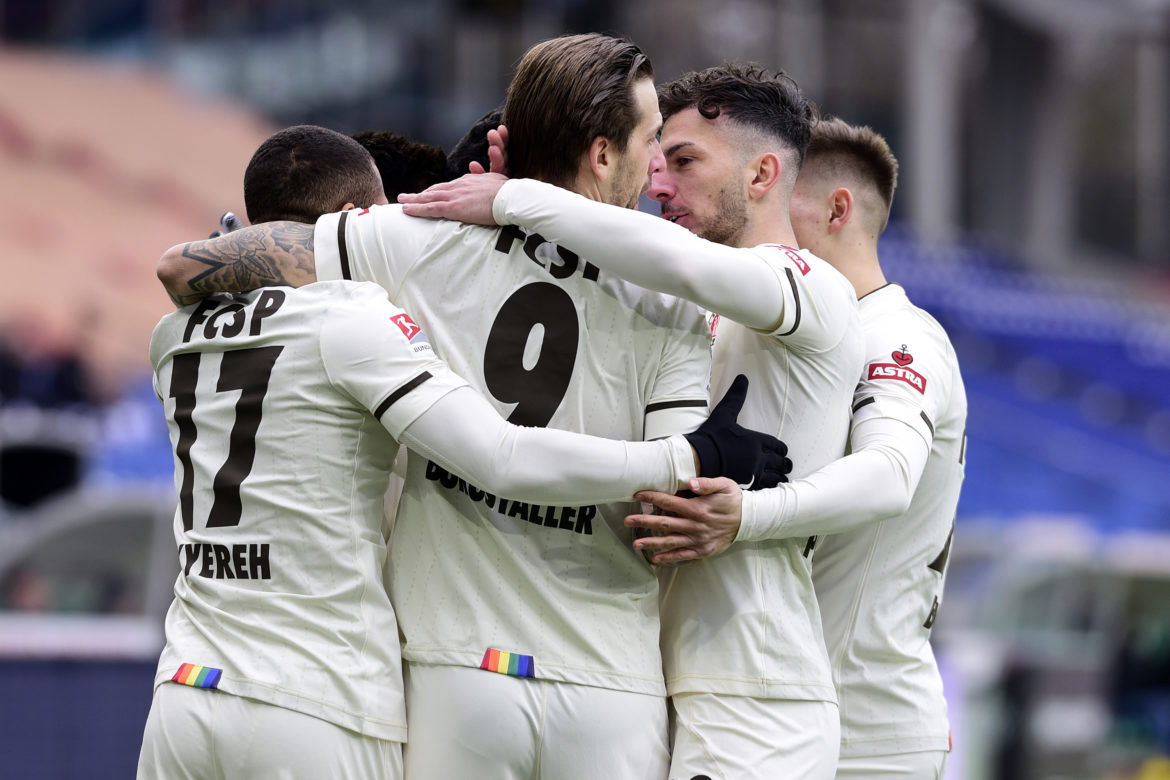 After 8 points from the last 4 games, something like a slight euphoria has set in at FC St. Pauli. In view of the league situation, the latest successes are by no means a reason to look forward to a relaxed second half of the season. But things don’t look quite as bleak as they did a few days ago. What explains the good results of the last games?

First of all: This text will not really provide an explanation. The explanation is simply that FCSP is now winning games and scoring points, even if they are fairly even. That was almost invariably not the case in the second half of 2020. But there are reasons why close games have recently tilted more towards the FCSP.

There are players who do not need an expert to recognise their exceptional skills. Omar Marmoush is one such player. His first short appearance in Würzburg had many hoping for more from him. At the latest during the following match against Holstein Kiel, it was obvious to everyone that FC St. Pauli had landed a big fish with this winter addition.

What makes Omar Marmoush a nightmare for defenders is his almost unbelievable speed: I can’t remember ever seeing a player in FCSP kit who has such an insane acceleration on the first metres. Yes, Max Dittgen is really fast, Ryō Miyaichi is too, but the way Marmoush separates himself from his opponents with the ball on his foot in two-three steps is simply blatant.

With this attribute, one thing in particular can be done offensively: Dribblings. With just over 12 dribbles per game, Omar Marmoush is involved in the most 1-on-1 duels in the entire division. His success rate of 43% is rather mediocre, but in combination with the speed that Marmoush usually has after a successful dribble and his field position, it often becomes very dangerous. Although Omar Marmoush loses an average of 17 balls per game (the most of all FCSP players), the risk is worth it (especially as Simon Makienok, for example, has 16 ball losses per game in his season statistics).

Thanks to these numbers, Omar Marmoush is one of the most productive forwards in the division. The number of games is still very low, but the direction is already clear: with 3.3 shots on goal per game, Marmoush is second in the division (behind Branimir Hrgota).

And with a rate of 60% of the shots that ultimately end up on goal, he would also be second in the division. If he can maintain these odds, FC St. Pauli should continue to be consistently dangerous in attack.

Of course, this is also due to the fact that the FC St. Pauli currently plays with three strikers, so to speak, who can all be described as difference players. Only the most hardened traditionalists would seriously describe Daniel-Kofi Kyereh as an attacking midfielder (which, strictly speaking, is Rodrigo Zalazar). And no one needs to be convinced of the importance of Guido Burgstaller after the last three matches.

“Fight & run until you drop” – That’s about what I want all players who wear the FCSP jersey to do in every game as a basic requirement. Sebastian Ohlsson had to leave the match against Regensburg early with cramps. He deserved to retire after winning 11 of 13 defensive duels.

Sebastian Ohlsson is not a loudspeaker, at first glance he seems rather cool and quiet on the pitch. But Ohlsson never avoids a duel on the pitch: with an impressive 169 defensive duels this season, Ohlsson has fought by far the most duels in the entire division and won a very good 65% of them. In addition, he is in the top 20 in the division with just under seven interceptions per game (and with a total of 110 this season has almost 40 more on his account than his best team-mates (Ziereis has a slightly better average with fewer games, but Ohlsson is clearly the best wing-back in the division in this category)).

Because of these performances, but also because of the rather precarious personnel situation in terms of right-backs in the FCSP squad, Sebastian Ohlsson is absolutely indispensable for the FC St. Pauli. An inconspicuous giant. Always inconspicuous, rarely with outliers, but constantly at a high level. Really strong, Seb! I sincerely hope that in the next six months we will read the words “contract extension for 1910 years” in connection with the name Sebastian Ohlsson.

The following list is certainly anything but clear. But it is possible to get mixed up with all the changes that have been made in the course of the season so far compared to the previous games:

FCSP was forced to make changes again and again, both in the formation and in the personnel. This was due to injuries, a non-functioning three-man backline, or weak performances.

Now the coaching team seems to have found a satisfactory formation, the 4-3-1-2, with a very diamond-like midfield. And since finally no one has been injured in the course of the last three weeks, there seems to be some kind of continuity on the pitch. There is no need to explain how important that is. It is currently evident on the pitch.

Nevertheless, with 16 points after the first half of the season, there is still a long way to go to stay in the division. One or two serious injuries, two games in a row in which the pendulum does not swing in the direction of FCSP, and the whole construct can be put to the test again. But it doesn’t seem at the moment that the construct would collapse neither quickly nor completely. The whole team seems relatively solid and with a little euphoria on my part I write: It’s going to be good because everything is going to get much better.

From now on, we always win!

4 thoughts on “The Bold, the Cool & the Continuity”