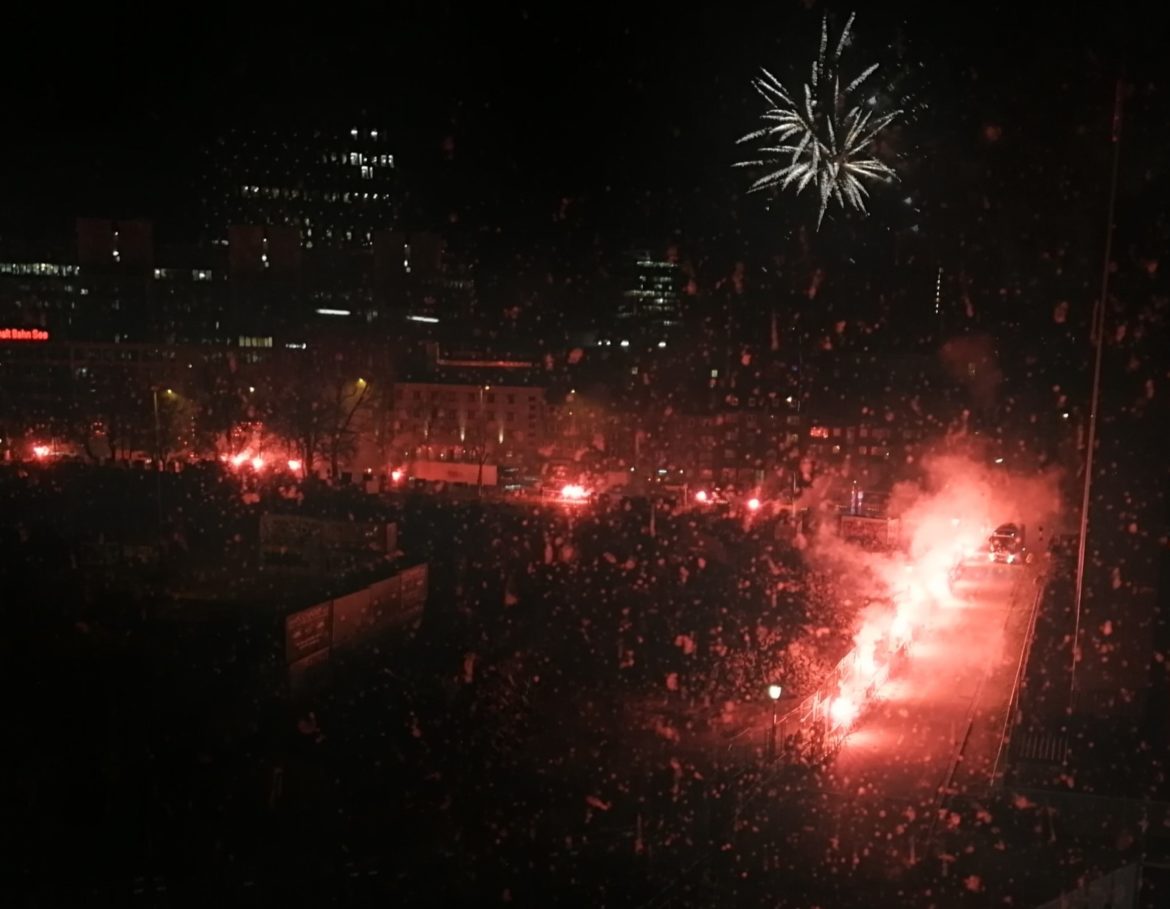 FC St. Pauli loses against VfL Bochum. And deservedly so. Because although Bochum played exactly as expected, FCSP could only keep up for one half. Similar to the first leg, FCSP focused on transition play, while Bochum looked for possession – and ultimately found it successfully. The defeat is particularly annoying because the manner in which the goals were conceded once again exposed the team’s own weaknesses.

Last night’s highlight, in the truest sense of the word, was to be marvelled at before the match (see cover picture). I myself was busy setting up for AFM radio when a fireworks display went off on Budapester Straße that can hardly be surpassed in beauty. The FCSP team bus was greeted by fireworks and countless flares. A great picture (which unfortunately doesn’t look nearly as beautiful through the glass from the back as it really was). What a push! The game started accordingly. Madness (and here from a different perspective).

Well, that’s when the problems really started. Sebastian Ohlsson had to pull out at short notice due to “muscular problems”. I really hope that this was only a short-term injury because once again it became clear that he is difficult to replace as a right wing-back. So FCSP started slightly changed with Adam Dźwigała as a right wing-back.

VfL Bochum also started with only one position changed: Gerrit Holtmann started on the wing instead of Pantovic. The two new players in the starting eleven were the biggest mismatch of the match.

In the pre-match report, I had pointed out that the offensive transition moments would be of central importance for the FCSP. And it was quickly apparent that this was precisely the focus of the FCSP. After the first promising situation had been missed by Omar Marmosuh, FC St. Pauli did better in the 4th minute: Kyereh, as in the whole first half, was quick-witted and, after winning the second ball, shifted to Paqarada who centred the ball in front of the goal. Guido Burgstaller then played a double pass with the crossbar – 1:0 (never mind that he played a double pass with the crossbar in the first place – it was in). A perfect start!

But the lead should not change the fact that VfL Bochum presented an incredibly mature game at the Millerntor and enforced it bit by bit and more and more. The FCSP was able to transition every now and then after winning the ball and that was usually promising because the positioning of VfL Bochum was quite open when losing the ball. But the FCSP seldom finished these situations with a shot on goal.

Instead, we inevitably have to devote ourselves to Bochum’s, admittedly very beautiful, possession football:

Also in the pre-match report, I had pointed out Manuel Riemann, who until this matchday had played more passes than most of the FCSP field players (only four had more). In possession, Riemann usually moved a good 20-25 metres out of his goal. This allowed the two centre-backs Leitsch and Bella-Kotchap to push outwards (so it was not a “dropping six” but an “advancing one”). This movement triggered a chain reaction in Bochum’s build-up play. Because the two outside backs Soares and Gamboa, two technically really strong players, could push far forward as a result and in turn pushed the offensive outsiders even further forward into the back row.

The open position was somewhat protected by Bochum’s central defensive midfielder Anthony Losilla, who, compared to Tesche, who was really strong yesterday, acted rather defensively. Tesche, on the other hand, kept pushing forward, mainly forming triangles with the two left-wingers. Robert Žulj also liked to do that, who repeatedly moved from his central position to the sides (mainly to the left) and was a good link-up player there.

The pressure from the Bochum side then became quite great quite quickly. And that was often the case in the first half because Gerrit Holtmann (but also Herbert Bockhorn, when they switched sides) had massive speed advantages against Adam Dźwigała. Again, I refer to the pre-match report, which highlighted Holtmann as the player who dribbles and crosses an enormous amount. At the end of the game, Holtmann’s work record included eight crosses (the average for the division’s top 3 is seven) and 12 dribbles (well above his average and therefore also in the top 3) of which he won a very good seven.

Let’s be honest: Adam Dźwigała didn’t have a chance against Gerrit Holtmann (and did it actually quite well though). He couldn’t have, because he doesn’t have the speed and agility that Holtmann brings to the platter as an offensive winger. And he doesn’t have to, because he is a centre-back and not a wing-back. That worked out well against Kiel because Fin Bartels likes to drift into the middle a lot and doesn’t have Holtmann’s pace either. Dźwigała vs. Holtmann, however, was a pretty clear mismatch, which VfL Bochum played unerringly. Consequently, Luca Zander was substituted for Dźwigała at half-time.

Ten dreamlike seconds – unfortunately on the wrong side

VfL Bochum’s equaliser was then quite imminent: After a few chances, Bochum briefly showed what a great central axis they have: Riemann’s throw-off overran the first line – Tesche processed well and overran the second line – Zulj made a turn and played a pass with direction, speed and length, where everything just fit, which Tom Brady couldn’t have thrown better (my mouth really dropped open, dude, what was that?!) and overran the last line – Simon Zoller tunneled Stojanović and slid in easily. I just have to say it: A great goal! Especially since there are less than ten seconds between Riemann’s clearance and Zoller’s shot on goal.

But it was still avoidable: When Dejan Stojanović leaves his goal to go into a duel with Simon Zoller, he has to fight this duel and, if in doubt, simply throw himself flat in front of the ball. Sure, the speed was enormous and if he doesn’t come out of the goal, it’s still a great chance for Bochum. But it looked really unfortunate like that.

An annoying goal against. Nevertheless, the course of the game was predictable and FCSP’s plan actually worked: VfL Bochum dominated the game and the FCSP waited for its opportunities to transition. There were many, many of these in the first half. But the FCSP too often did not make enough of them and could, I repeat, only very rarely finish them off with a goal (symbolic of this was a counter-attack that Marmoush could probably have finished off with a pass to Burgstaller to make it 2-0, but did not play the decisive last pass).

Nevertheless, it was 2-1 just a short time after the equaliser, because Daniel-Kofi Kyereh gave the ball a very crooked turn thanks to unevenness in the turf and Manuel Riemann didn’t really look his best when he shot from around 22 metres.

What kind of game would it have been if FC St. Pauli had gone into half-time with that lead? Hard to answer. But I don’t have to, because Gerrit Holtmann got only one of his eight crosses to his teammate – the one for 2-2. And here again, the FCSP have to look at their own nose: Philipp Ziereis could have headed the ball out easy-peasy, but said after the game about the situation “Dejan calls and I pull my head away, unfortunately”. Crap.

The 2nd balls for FCSP remained in the locker room.

Although the substitution of Luca Zander at least ended the mismatch on the right-wing, only VfL Bochum played in the second half. There was hardly any relief for the FC St. Pauli. It seemed as if the offensive front three around Kyereh, Burgstaller and Marmoush was completely cut off. Especially Marmoush managed quite little: he won only 2 of 11 duels in the offensive.

I honestly can’t say exactly what changed in the match between the halves, I didn’t see any change in the Bochum team. It’s just that the second balls were much more frequent for Bochum than for FCSP. Of course, that wears down your own play when you have to chase constantly. However, it was noticeable that the VfL Bochum was able to create many more situations directly through the centre in the second half, which in my view was due to Robert Tesche acting a little more offensively and thus increasing the pressure on Benatelli, Becker and Zalazar enormously.

However, there was no real impetus either, no initial spark or any kind of rebellion against Bochum, who were playing strongly. Instead, the game became more one-sided with each passing minute. VfL Bochum’s third goal was again well played out, but it was also defended in a rather pompous manner and, as a deflected shot, it was simply a crap goal.

A few statistics on Simon Zoller: Yesterday, he won an unbelievable 75% of his duels (80% in offensive duels), all of his headers and all of his dribbles for a striker (fits in quite well with the FCSP centre-back’s stats mentioned above). Especially in Bochum’s pressing, it was often enough for Zoller to run into Buballa, Stojanovic and Ziereis alone to force the long ball. A 3-on-1 that ultimately went clearly to the 1. Impressive reading on the Bochum side.

It also happened as expected in the pre-match report: Robert Zulj (1 goal, 1 assist) and Simon Zoller (2 goals, 1 assist) were very strong offensively and were ultimately too big for FCSP yesterday.

It was almost a kind of déjà vu: In the first leg, too, there were two quite different halves. In the first half, VfL Bochum dominated because FC St. Pauli rarely switched gears well and gave away the half-chances. In the second half, FC St. Pauli had many promising situations and VfL Bochum could hardly do anything with all the possession. Last night it was the other way round: FCSP had promising moments of transition play, especially in the first half, and could hardly get anything going in the second. To make matters worse, they somehow managed to score the three goals they conceded themselves. All in all, a déjà vu that reminds me of many bad moments in the season so far.

Bochum was better – Annoy briefly, then be better in Heidenheim!

Without a doubt, this game showed that we can’t keep up with some teams this season. That was the case in Fürth and it was also the case against VfL Bochum. I would like it to be different, but it’s just not the case at the moment, I have to say that quite honestly. These teams are currently ahead of FCSP in many ways.

And this game also showed once again that FCSP’s defence is anything but stable. The zero against Regensburg or not, it doesn’t fit in too many places. There are always goals conceded, which can happen, but happen far too often at FCSP in the course of the season so that one can no longer speak of bad luck here.

But of course, that doesn’t mean that it’s all for nothing. On the contrary, we are still on the right track. It’s just that it doesn’t lead as steeply upwards as we would all like, but rather with slow steps upwards. Keep moving forward!