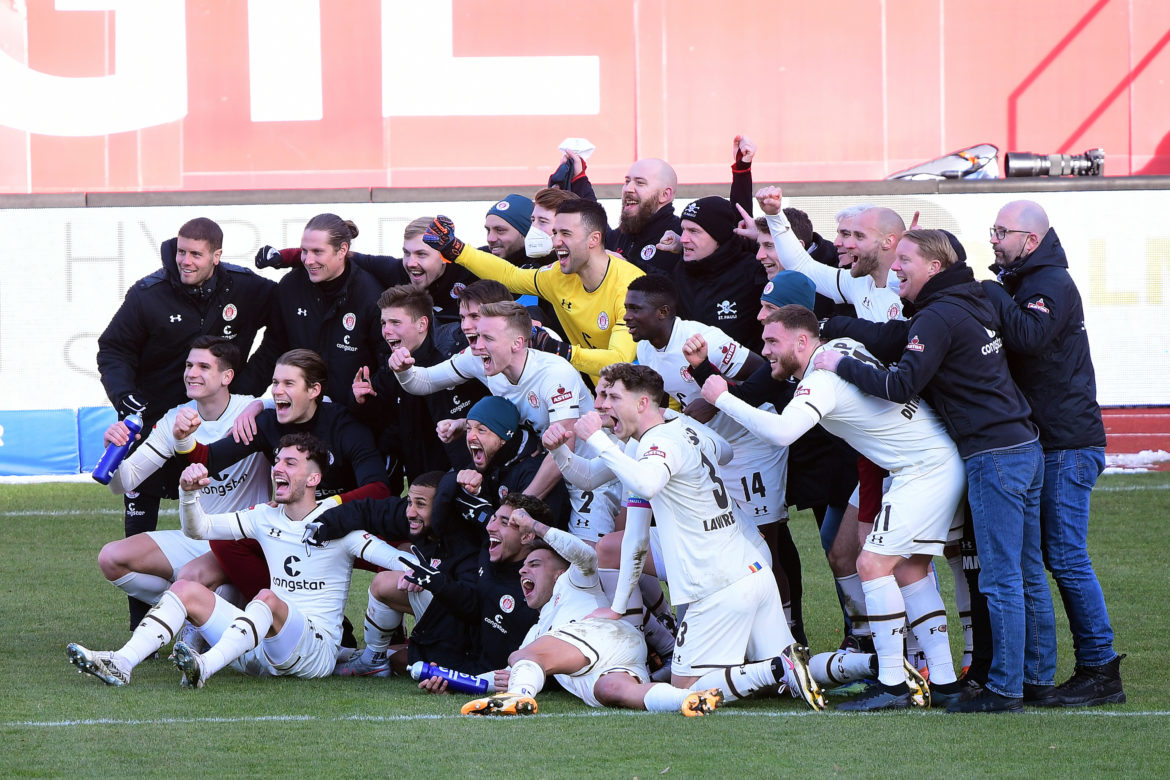 The FC St. Pauli wins well-deserved at 1. FC Nuremberg. What happened between minutes 15 and 65 on Sunday in the Max-Morlock-Stadium was one of the best performances of the FCSP of this season. The FCSP is just to blame that it became a little exciting again shortly before the match ended. With this win, not just the opponent could be overtaken in the league’s table but in general, also the distance to the relegation ranks could be raised significantly.
(Cover picture: Peter Böhmer)

(All following statistics sourced from WyScout)
Contrary to my expectations, the FCSP began the match with no changes in the line-up. This also meant that Philipp Ziereis also started against Nuremberg instead of Tore Reginiussen who couldn’t celebrate his début in the starting eleven.

I did expect the FCSP to start with Reginiussen to combat the physis of Manuel Schäffler a little bit better. However, at Nuremberg, not Schäffler but Schleusener started as a centre-forward. So this was a good fit, also confirmed by 80 percent of won duels at the ground and in the air by Philipp Ziereis.
Additionally, compared to the last match, the FCN began with Knothe instead of Valentini as a right wing-back. Other than that, there were no surprises in the starting eleven.

Against a lack of courage, you can also press successfully with one man down.

No chance for an orderly built-up play. Both teams chose to press highly and it proved to be effective on both sides: There were technically no ordered attacks against positions but actually just transition play moments, the fight for the second ball and set-pieces.

Both teams pressed highly, however, very differently:
The FCN always allowed a little space to the player who was supposed to be pressed against and was only attacking with full-speed when the respective player received the ball. In general, a midfielder was moving to the front so that they pressed in a 4-4-2 whereby the outer midfielders consistently attacked the wing-backs of the FCSP. By doing this, the Nuremberger’s enforced many long balls in the built-up of the FCSP.

On the other side, it was rather a blocking of the FC St. Pauli than aggressive attacking. Burgstaller and Marmoush blocked the space in front of the central defenders and attacked them moderately. The decisive factor, which rather took me by surprise, was that  Daniel-Kofi Kyereh was blocking both central defensive midfielders of Nuremberg at the same time and on his own. The central defenders of Nuremberg simply did not pass the ball to the duo of Geis and Krauß (who was positioned a little higher than Geis). First, because they were in the blocking shade of Burgstaller/Marmoush but also because Kyreh in the vicinity could have gotten hold of the ball. “Could have gotten” … you realise that there could have been a real advantage for Nuremberg if the central defenders would have played with a little more courage and the central defending midfielders would have shown more initiative. However, by not doing so, the FCSP could block four players of the FCN with three players only.

Like against Heidenheim, Becker and Zalazar pressed against the opponent’s wing-backs on the flanks. While the centre spaces were rather blocked, the wing-backs were attacked aggressively.
Also, both FCSP wing-backs followed their opponents consistently when defending even if this meant that they clearly had to leave their respective position in the back four. But they could afford to do so as the FCSP outnumbered their opponent in the back because, even when outnumbered themselves in the front, they controlled the match there.

What appeared rather balanced in the beginning started to become a pretty one-sided affair from minute ten onwards but definitely since the 15th minute: The FC St. Pauli improved their transition play, the FCN failed in many areas which was especially due to a better duel fighting and the felt safer wins of second balls of the FCSP.
And if the FCN managed to win a ball from time to time, then a player of the FCSP was booked (Ziereis and Lawrence) or there was  Eric Smith who stopped the attack. An incredible half of Smith. Unbelievably what he cleared there and thus ensured that all players in front of him could take high risks and thus elicited more chances.
In his 51 minutes on the pitch, Eric Smith scored exactly zero offensive actions into the panel of WyScout. Instead and similar to the match against Sandhausen, he won more than three-quarters of his duels and when fighting a duel for a free ball, he won five out of five balls. After the match, the ambiance mics revealed that he has a suspicion of a concussion. I wish him, maybe a little biased for the FCSP, the best and speedy recovery.

An impressing number of 16 shots on target were fired by the FC St. Pauli just during the first half. The first promising one was wasted by Leart Paqarada who was standing freely after the beautiful work of Kyereh (23.).
Five minutes later, the FCN cleared a set-piece insufficiently (not the very last unlucky action of Mühl), the second ball bounced back to Burgstaller who then kicked a bouncing ball against the bar. The analysed weakness of the FCSP with regards to headers did not only show in the defensive (again the conceded goal was shot through a header) but also when Philipp Ziereis shot above the bar after he was entirely free in the 31st minute.
It just turned brilliantly in the 38th minute, when Guido Burgstaller, however, failed to score with his heel against FCN-goalie Mathenia after an outstanding combination.
Already during injury time of the first half, it was a second ball for the FCSP which Omar Marmoush could forward to Guido Burgstaller (Lukas Mühl defended insufficiently) who then scooped the ball absolutely remarkably from 16 metres on a half-right position into the left angle with the outside of his instep. Did I write last week that every goal of Burgstaller is beating the previous ones with regards to ugliness? Well, I did. If I somehow triggered something by doing so, it worked out perfectly so let’s take the next step: Guido Burgstaller is only scoring once per match. Because he cannot do more! Partly, I was left with my mouth wide open due to the quality the tremendous creativity and the high speed of which the offensive department of the FCSP is capable. Possibly, the side of Nuremberg might judge differently but in my opinion, a second division club can barely defend something like that for the entire length of the match. The FC St. Pauli under head coach Timo Schultz together with the newly added players managed to develop a mode of play that always manages to elicit something, no matter if the opponent is defending high, deep, cross, in a diamond shape, in a square, by the power of three or in the sixth decimal root. This is awesome!

Second half – same, same, but different

For the second half, FCN substituted Manuel Schäffler and Georg Margreitter for Krauß and Sörensen. A change of formation did not happen (for now), however, Nuremberg moved their play more to the double six and the left outer flank now.

Manuel Schäffler showed a discreet performance only but also, that he is a very sad and tiny personality. First, he rammed his elbow against Eric Smith’s temple, then he did the same against Sebastian Ohlsson and James Lawrence. But only after the foul against Lawrence, a free-kick resulted for the FCSP. A very weak performance of the referee and especially of Schäffler.
And because of the fact that I consider such a way to play as really dirty, I also publish some more statistics about Schäffler here: no shot at the target, no assist, only 4 out of 8 passes were successful, a very meagre ball handling in the box and he only won one offensive duel … very weak.

While the 1 FC Nuremberg remained rather weak, the FCSP lined transition play from counter attack to outnumbered situations on the last third to advantageous ball win to transition situation. Also in the 65th minute, Sebastian Ohlsson and Daniel-Kofi Kyereh were quicker in their brains than the entire Nuremberg defense and performed a throw in quick and deep – Lukas Mühl who was already unlucky at the first conceded goal, did foul  Kyereh. After two very borderline situations earlier in which players of Nuremberg touched the ball with their hands in their own box, the FCSP received a penalty kick in the 65th minute. Omar Marmoush (who managed to play an unbelievable number of 21 out of 23 passes successfully as a forward) scored and thus changed the result to the well-deserved 2-0 from an FCSP perspective.

The FC St. Pauli showed a very good football match but is also to blame that they did not take the lead with more than two goals earlier. The fact that they were only in lead by two goals after 65 minutes does barely reflect the course of the match.
Shortly after the 2-0, FCN head coach Klauß substituted with Borkowski a second forward and thus changed the formation from a 4-2-3-1 to a flat 4-4-2. This caused more problematic assignments on the pitch for the FCSP. Because Dovedan on the left and Møller Dæhli on the right now acted from deeper positions and with a good connection to their wing-backs. These routes when pressing could not be followed by the FCSP wing-backs without hesitation because first, they were rather long and second the FCSP now faced two forwards centrally.

Maybe due to the formation switch but maybe also due to the beginning exhaustion, the FC St. Pauli allowed getting pressed deeper into their own half. And so it happened what had to happen: Between minute 73 and the end of the match, Nuremberg shot on target nine times. And the very first attempt scored already, of course with a header. Beautiful crap.

Timo Schultz reacted to this switch in a similar way as he did in Hanover: rather late but still in the lead and thus not too late he switched the FCSP to a 5-3-2. By doing this, Ohlsson and Paqarada could move much better towards Møller Dæhli and Dovedan again and so the FCSP got more grip to the game again. Following on that, Matanović (87.) or Dittgen (90.) could have scored the third goal if they were not even supposed to do so.

Eventually, the FCSP managed to defend the lead till the end. Also because the FCN had more of the game, but no really compelling chances. Breathe. Even though the FCSP had some serious problems in the last 30 minutes of the match, the win is absolutely deserved.

Three away wins on the bounce!

After the wins in Hanover and Heidenheim, the FC St. Pauli also manages to win in Nuremberg. An almost frightening but beautiful series. Due to the win and the results from the other pitches, they created a little buffer of 7 points to the relegation play-off rank.
After a convincing win against Sandhausen due to defensive stability, the FCSP showed the same stability against Nuremberg, at least until the last 15 minutes. But they also showed that the FCSP is currently apparently the best team of the division with regards to offensive transition play moments.
Nevertheless: with 25 points in the books, the FC St Pauli collected some points but another dry spell such as in the first leg could turn the tides pretty quick again. Don’t slacken now!

Keep on pushing to the front!