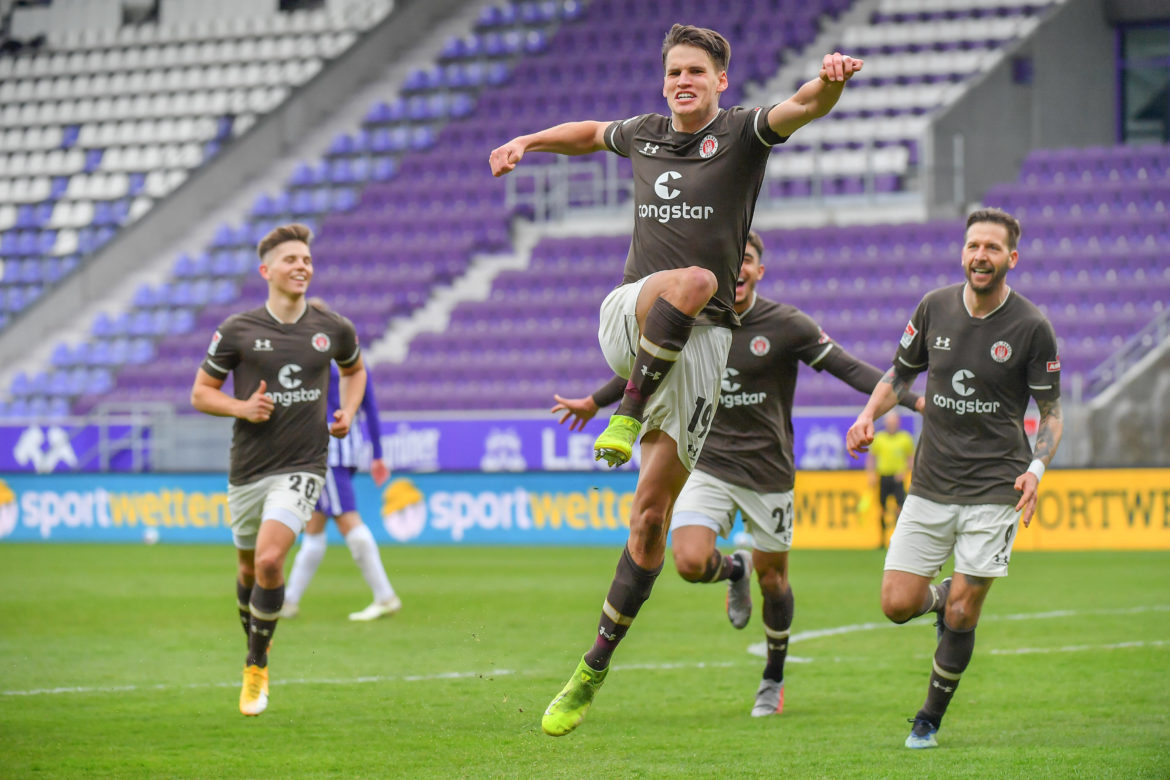 The text in which I celebrate the win against Aue, the third in a row, a bit biased can be found here. But as this text doesn’t shed much light on the pure match itself which definitely had something to showcase from an FCSP’s perspective, let’s cast another gaze into the statistics.

But let’s start with an ear-catcher which hasn’t left my ear since yesterday afternoon (the elder ones amongst us will remember the melody from the Millerntor):

No changes at the FC St. Pauli. This also meant no Tore Reginiussen in the starting eleven, which I had expected in the pre-match report. The FCSP started with its well-proven 4-4-2 with a midfield diamond.

At Erzgebirge Aue on the other side, there were quite some changes: For the suspended Gnjatic, a bit surprisingly, Philipp Riese began who just had another short appearance against Regensburg recently after his fibula fracture. Another change happened in the basic formation: Instead of the 3-4-1-2, Erzgebirge Aue lined up in a classical 4-2-3-1.

Of course, if you take the lead in the very first minute, the match clearly runs in your direction. But what followed in the following minutes was clear supremacy of the FC St. Pauli on the pitch against an overwhelmed opponent.

Only in the match of the first leg against Aue the FC St. Pauli had more ball possession (namely 63.5%) than in the match on Saturday in the Erzgebirge with 62.7%. It would have been even more than that if the FCSP didn’t decide to take the foot off the throttle at the end of both halves. Between the 16th and the 30th minute, the ball possession rate was at a saturated 82%.

A lot of ball possession is also reflected in the number and rate of passes played: For the first time of the season, the FCSP delivered more than 500 passes to the own teammates which equals a success rate of 85.5% (also a new high of the season). Another best value was reached with regards to lost balls: with only a little over 100, this is a very good value. But was it effective though? Nearly every tenth pass the FCSP played was a successful one into the last third and one of every three passes played was played to the fore. So this value isn’t only based on successful horizontal or back passes.

Horizontal and back passes would have been fairly easy though, as Erzgebirge Aue, as expected, didn’t press high at all when the match started with an average PPDA-value leveling off at 15.1 (due to a high pressing at the end of the match, which is almost in line with the season’s average-value of Aue, that holds the red lantern in terms of PPDA (Note of Maik: Of course, I quickly googled PPDA for you= Passes Per Defensive Action which is the number of passes that are played before a defensive action is initiated: a caught pass, a duel, a foul. The higher the value, the more time is given to the opponent in this regard). On the other side, the FC St. Pauli aimed for a much higher pressing (which was successful pretty often): its PPDA-value when the match ended was 7.7 on average which is to be located amongst the top teams of the division. And it was due to the successful pressing that the FCSP had that much ball possession in the second fifteen minutes of the match: between minute 16 and 30, the FCSP only allowed two passes of the opponent before they started with their defending! Marvelous!

And from this pressing, alike against Braunschweig, some good situations emerged. In total eight successful attacks could be initiated by the FCSP out of such transition moments (against Braunschweig there were nine similar situations, the best value of the season). But before I only report the good stuff only we also have to acknowledge that the FCSP only managed to shoot at the goal in two of these eight situations which is a rather poor outcome.

In general, the massive supremacy of the FC St. Pauli isn’t directly reflected by shots. 15 shots are rather average. But alike against Braunschweig every second shot was a shot on target (to be precise: 8 of 15) which is a good value though.
The supremacy is a little better reflected by the xG-value which was 2.29 to 1.21 for the FCSP.

When there’s a good team performance, there’s also some good individual one

Although he played for 30 minutes only and was only substituted when the score was 3-0 already, holy cow what a performance of Afeez Aremu! Only one meager bad pass, won all of his duels, no matter if dribbling, header, defensive or offensive duel. Already during the match, I couldn’t believe what I saw when he caught two passes of Aue. This guy is really good at winning balls!

A few days ago, I wrote about an imbalance at the FCSP in two regards but this claim was absolutely destroyed in the match against Aue. The playmaker of the FCSP yesterday was Philipp Ziereis, I have to repeat: Philipp Ziereis. He played most of the passes of the FCSP (79 of which 74 were successful) and amongst those passes that need to be highlighted were some successful diagonal passes to the offensive outer flanks and three such passes through the centre. I would have been almost certain that we would dearly miss the build-up play of James Lawrence but I hadn’t taken the passing machine Ziereis into account yet. Really strong.

The second imbalance was caused by Leart Paqarada and Sebastian Ohlsson. As Paqarada is usually playing more offensive and with more ball possession than Ohlsson, the play of the FCSP was slightly imbalanced. With Luca Zander as a right wing-back, there was not just massive pressure on the left flank but also on the right. Of course, two goals speak a clear language but I am not referring to those (as they were rather set-pieces). In Aue, Luca Zander had more ball contacts inside the opponent’s box than Sebastian Ohlsson throughout his last six matches on the pitch. The same is true for the number of goal-assist attempts. Well, this report appears quite bold but the offensive desire of Zander is clearly recognisable. And this contributes well to the play of the FCSP as their opponent now also has to expect positional attacks from the right flanks much more often.

I could widen this list with plenty more players: During the last two matches, Adam Dźwigała only lost one defensive duel (even though we have to talk about the goal of Aue). But taken into account that this lad wasn’t on the pitch (or even in the squad) for almost two months (if we let the few minutes in Osnabrück aside), he’s delivering quite well.

And I also have to point at Omar Marmoush. Yes, led ten dribblings again and his speed is absolutely incredible. But do you know his biggest skill? When he’s passing. Omar Marmoush is the best forward of the second division in terms of playing passes with a pass ratio of ~83%. Of course, we have to look where he plays which pass but he’s definitely top notch of all forwards of the division (and if you look at his assist for the 2-0 against Braunschweig you know that he can play more than just back passes). And also against Aue, he delivered 12 of 13 passes to his teammates. Especially with regards to the spaces Marmoush is covering on the pitch, this is a really good value.

I don’t mention Guido B. He isn’t capable of many things. For example scoring the pre-decision. I. Am. So. Disappointed!

If we celebrate two goals after set-pieces in one game only, in Aue, and when a match isn’t thrilling until the end, there’s isn’t much that has gone wrong. It’s remarkable that the goals after set-pieces were almost identical, even though mirrored. Two times, Zander simply runs towards the back-post. From Aue’s perspective, it mustn’t have happened that Zander appears at the back-post at the first time. But the same all over again? This appeared almost intended by Aue. The two goals after set-pieces also cover up a little bit that the FCSP had many chances out of their play but didn’t manage to score in so many facets. (I told you already, Guido isn’t capable to do so). Especially during the second half, Aue shouldn’t have mourned about a higher defeat. Anyway, I am again starting to blame the FCSP for winning a match not high enough. We should rather indulge here (..but not with Guido!).

(all data, if not cited differently, by Wyscout)