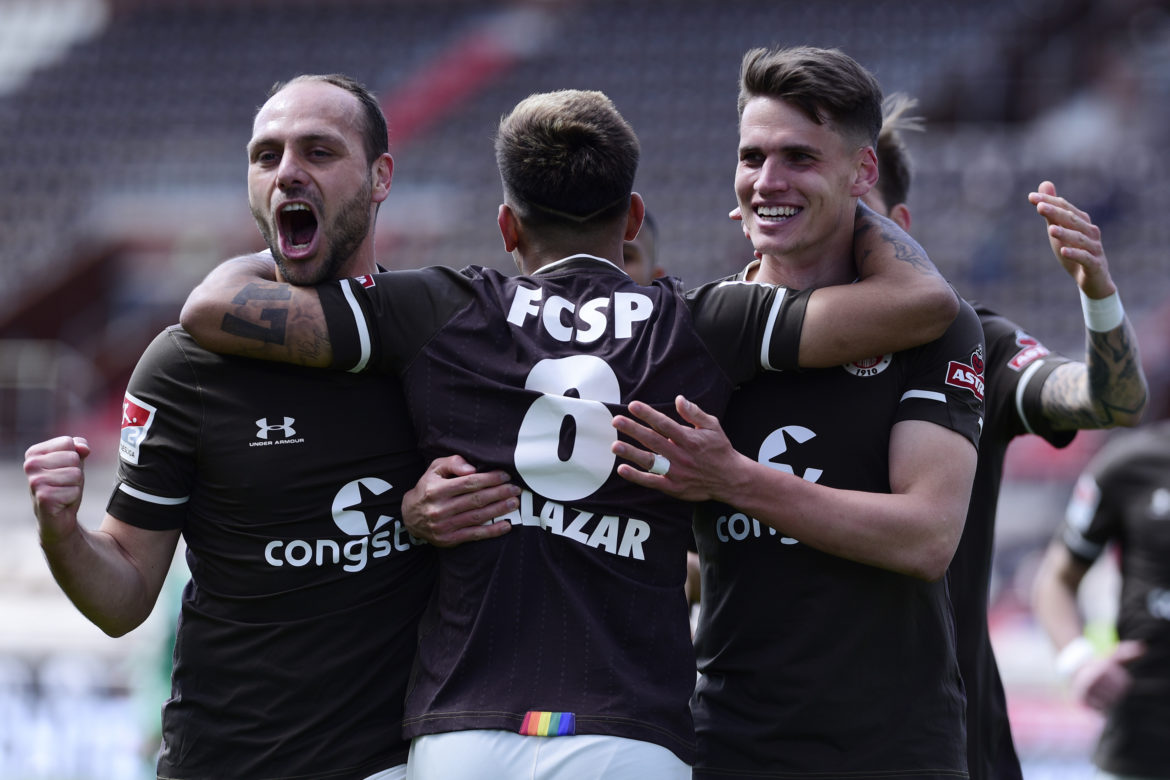 In a truly really appealing match, FC St. Pauli beats Greuther Fürth. Two early goals after the respective starting whistles aided enormously to that. The way how this lead was kept against one of the best teams of the second division can be described as an accomplished performance. Because besides the goal conceded at a very late stage, the FCSP didn’t allow much to anything during the second half.
(Coverpicture: Peter Böhmer)

There were two changes compared to the defeat in Düsseldorf. Instead of Tore Reginiussen, Philipp Ziereis returned into the starting eleven. As Reginiussen wasn’t entirely fit, he didn’t even make it into the squad. On the six, Rico Benatelli started instead of Afeez Aremu.

No changes were made at Greuther Fürth. The slightly injured Paul Jaeckel recovered just in time and was able to play. After the convincing 3-0 against Osnabrück, there wasn’t much incentive to change the line-up though.

So, both teams started with the recently practised 4-4-2 with a midfield diamond. I did wonder in my pre-match report whether the FCSP would possibly react to the very strong diamond of Fürth with a 3-5-2 formation. But this would have been the typical “We rather prepare for the opponent as we do not entirely trust in our own skills” – even after three months, I still have to accommodate to the fact that the FCSP has as well as a well-functioning mode of play so that they don’t have to react completely to the opponent. The fact that I still think this way is because it was exactly done that way for the years. What a pleasure that this changed for the better.

It’s rather remarkable how similar both teams aimed to build up, but then, despite the same basic order, embarked on different roads. Both teams pressed relatively high, Greuther Fürth actually very high, so that the FCSP faced some real challenges in their structured build-up play. On the other side, Fürth was able to outplay the high pressing of the FCSP from time to time and then won space on the outer flanks. However, the team then failed due to the well-working defensive centre of the FCSP. This shouldn’t blame the FCSP’s pressing at all as there is a clear development to the better in terms of team behaviour.

I already described frequently that the wing-backs of the opponent are pressed by the half positions which were always Zalazar and Becker in the last couple of matches. This attacking behaviour is still practised. However, only if the opponent’s wing-backs are still rather close to their own goal. When they are positioned further up, FCSP’s wing-backs take over attacking those guys while the players at the half positions stay put in the centre. This attacking behaviour causes that the whole FCSP’s back-line of four has to move towards the side where the ball is. This can then cause further errors if the spaces between the defenders aren’t correct. However, the advantage of still having the half positions in the centre is enormously and the FCSP as a team managed the pressing and the according movements pretty well.

Against Fürth, Zalazar and Becker could thus often stay in the centre. If they somehow, however, pressed against the wing-backs though (if those were positioned deeply in their own half), the coverage of the opponents in the centre was taken over by Zalazar and Paqarada who then moved to the half-positions. This handing-over of the defensive tasks was working pretty well so that Greuther Fürth was partly still able to perform their actually well-working pressing play, however, not in the same frequency compared to the most matches of the season.

Oops… they did it again

Well, I would easily say, the course of play was rather predictable. At least by those who have read my article of the FCSP’s performance in the respective stages of a match (available in German only). The FC St. Pauli once again showed that they perform pretty strong in the very first minutes of a match so that they didn’t take the lead undeservedly, scored by Luca Zander following up on a corner ball. The FCSP shot three times at the target during the first fifteen minutes, Fürth didn’t shoot at all (xG: 0.47 – 0.0).

But whoever did read the article also knew that the FCSP does almost everything except playing dominantly during the last fifteen minutes of the first half. So this was also true yesterday when Fürth shot at target four times during this phase while the FCSP did not shoot at all. So the fifteen minutes before the break were again the worst performance of the FCSP (xG: 0.0 – 0.56).

Still, I cannot explain how this difference is actually happening which then leads to the fact that the FCSP returns strong from the locker room but enters it very weak. Anyway, of course, I happily accept the lead at half-time. Because this is actually the best that could happen for the FCSP:

I agree with Stefan Leitl

“If you want to win here, you’ll have to take the lead” – Of course, many managers would have thought the same, but no one actually spoke it out loud and clear the way Stefan Leitl, manager of Greuther Fürth did at the post-match press conference. Clearly nagged because of the defeat and because he was asked the same question four times over and over again, he clearly described how difficult it is to play against the FCSP when behind. Because the treasure of the FCSP is and remains the very strong transition play. If a team lies behind and has to risk more, there are inevitable more spaces for counter-attacks. The FCSP could always make use of these emerging spaces because the players of the team are fucking strong in terms of speed. The early goals of the FCSP are perfectly helping in this regard, too.
“Don’t score the decisive goal too early” is happily stated by my blog mate Maik. However, for the FCSP, a game can’t develop any better currently than taking the lead early as this is often enough some sort of pre-decision.

Anyway, after taking the lead early in the first half, not everything worked out as smoothly as planned. Because there are 75 ball losses during the first 45 minutes in the books for the FCSP. That’s pretty much (Fortuna Düsseldorf lost the ball 88 times when they played against FCSP, however, during the whole match).

Emblematic for this rather scattered play of the FCSP was once again Omar Marmoush. Every fifth ball loss was due to him. A really unlucky half for him. But together with the whole team, he recovered from this phase: When the starting whistle for the second half was blown, the FCSP showed a different face.

Magical Zalazar and a fantastic combination of numbers

When Timo Schultz visited the MillernTon for the first time, he impressively reported what is watched out for in the development of young players. Amongst others, he emphasised that players have to stand out from others in terms of their skills with some sort of “signature move” – If I had to describe the special skills of Rodrigo Zalazar, I would exactly describe what happened shortly after the second half started: Zalazar received a ball on the left in the back and had many players of the opponent in front of him. With an acceleration hard to beat he then moved diagonally to the front (possibly only Marmoush could beat him speed-wise). Nobody was able to follow him. The outnumbering that Fürth did elicit was gone within moments. He then dribbled up to the opponent’s box. And while he was dribbling up there, many opponent left their positions in order to attack him but he simply passed them at high speed. This triggering of the opponents out of their line then caused that Guido Burgstaller was entirely unmarked at the left corner of the box.

This movement of Zalazar is actually not defendable. Mostly due to the fact that he always keeps his body between the ball and the goal. His dribblings thus function in a similar way like those of Arjen Robben who played left-footed on the right. Zalazar does it the other way round and from a deeper position. The value of such dribblings is incredibly high and performed from this position definitely a “signature move” which will certainly open some doors for him at (sportively) higher-ranking clubs.

For three matches in a row, Guido Burgstaller didn’t score and by not scoring he resisted all of my trigger approaches. But definitely not because he isn’t able to score goals. Nope, Guido Burgstaller is simply a fine lad who absolutely knows what makes the heart of an FCSP supporter smile. Because yesterday in his 19th appearance for the FCSP he scored his 10th goal – well if this isn’t a declaration of love what else would be one? And you have three guesses to guess how many goal assists Daniel-Kofi Kyereh had after his 19 appearances wearing the kit of the FCSP in the second division? Guys, I am up to a very hot thing there… By the way, against Kiel, Omar Marmoush could make his 19th appearance for the FCSP. So far he participated in eight goal assists…

But back to the match:

Straight after the 2-0 and between the 65th and 75th minute, the FCSP had its best phase of the match and produced good situations non-stop. But no further, match-decisive goal followed. On the other side, no much danger arose in front of Dejan Stojanović. The FCSP defended too well, mostly when the ball arrived at the centre. In the end, FCSP can worry that they conceded another goal so that their remarkable defensive work during the second half wasn’t paying off totally.

Overall, the conceded goal is okay because Fürth didn’t make use of other promising chances during the first half or because Stojanović defended very well.

Can you read the division’s table?

Yepp, I can read the table. Yepp and as long as it’s technically possible I want to get promoted and not give up on that. But: The current table suggests a much bigger chance than there actually is. At the moment, it’s just “four” points behind but together with Heidenheim, the FCSP is the only team without any postponed matches left, all the other teams up there can even move further up point-wise. For example, Fürth plays against Sandhausen during the next week. Also, HSV and Düsseldorf have another postponed match to play. Holstein Kiel has even four matches less than the FCSP and also KSC, currently eight points behind rank 3 but also with three more matches remaining, can attack even higher than the FCSP.

So there would have to run too many things too smoothly for the FCSP in order to still get promoted. Even if the last three matches will all be won, it’s rather unlikely that all the teams outplay each other in terms of losses. But it doesn’t matter at all how we’ll achieve it and how hopeless the situation was after 31 matchdays played. Because as Omar Marmoush will participate in two goals during his next appearance, there will be a good start.

(If not marked differently, all statistics by Wyscout)