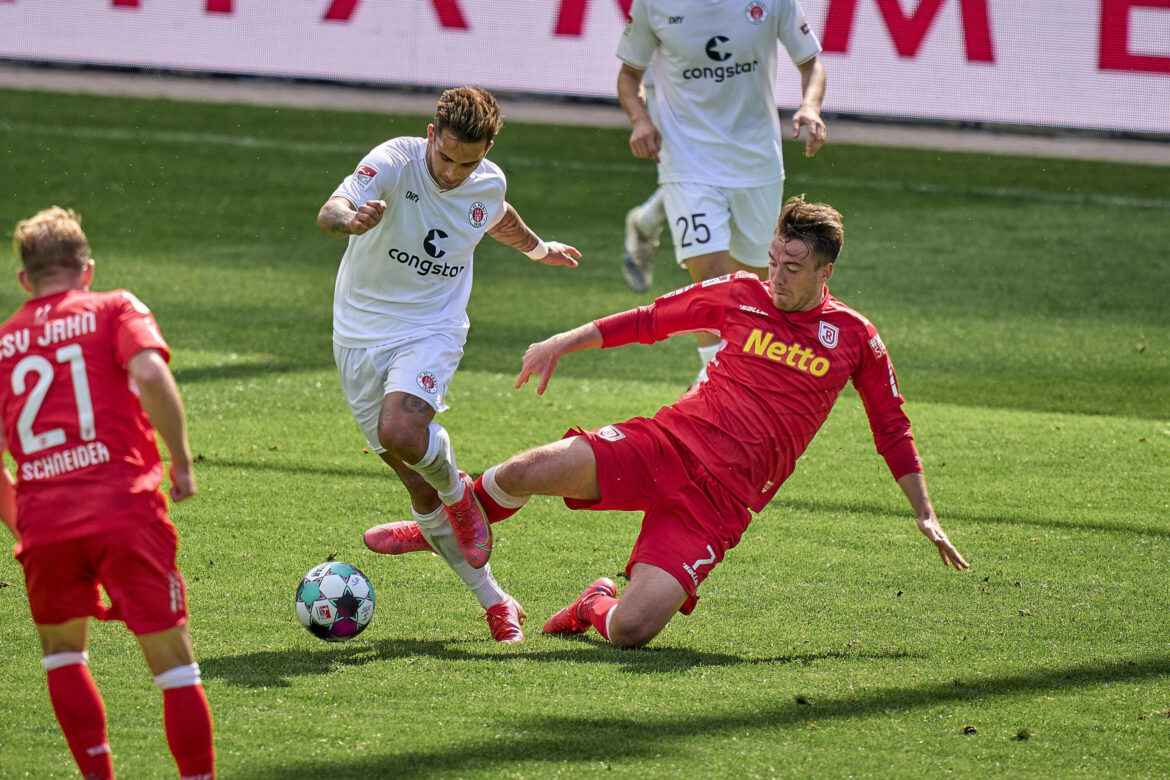 FC St. Pauli loses at the end of the season in Regensburg at 0:3. What sounds like a clear defeat, Jahn Regensburg really only earned after it was already 0:3 from FCSP’s point of view. FC St. Pauli was the team with the better approach to the game for a long time. However, this was of little use, as one core competence was almost completely missing. The title of this match report is to be understood ambiguously.
(Cover photo: imago images/via OneFootball)

FC St. Pauli had a spot to fill on the six. With Benatelli missing through suspension and all the other nominal sixes out injured, it was Adam Dźwigała who found himself in the starting lineup in this position. So it was still a 4-4-2 with a midfield diamond. A 3-5-2 would also have been conceivable, as I explained a bit in the preliminary report. But FC St. Pauli decided not to change the formation. And that was probably the right decision. In central defense, Daniel Buballa replaced the suspended James Lawrence. As we learned shortly after the game, this was his last game in the jersey of FC St. Pauli. (Goodbye. Buba!).

There were three other changes from the home defeat to Hannover 96, but these were more of a return of regulars to the first eleven: Dejan Stojanović, Finn Ole Becker and Omar Marmoush returned to the starting eleven for Dennis Smarsch, Christian Viet and Maximilian Dittgen.

Jahn Regensburg made two personnel changes compared to the last game: Sebastian Nachreiner moved to the center-back position. Thus, Erik Wekesser (what a pace!) could move back to his usual left-back position, where he displaced Jan-Niklas Beste from the starting eleven.
In the offense, Jan-Marc Schneider moved into the starting lineup for winger Albion Vrenezi. However, Schneider played in the attacking center together with Andreas Albers, who was shifted a bit to the back, while the outer lanes were occupied by Sebastian Stolze and Jann George.

The game then developed exactly as expected: Jahn Regensburg put on its already familiar intense and physically very hard pressing. From my point of view, this style of play was a bit courted by the referee, but that was not a reason for the defeat. Nor was it Regensburg’s style of play that was responsible for the defeat. Because actually FC St. Pauli had adopted exactly this style remarkably well: FCSP even set a season record with 57% of duels won. Offensively, Regensburg could only win just under 30% of its duels.

Only right at the start of the game did FC St. Pauli have a hard time dealing with Regensburg’s aggressive style of play. The problem: Just when it looked like they had adjusted, the 0:1 was scored (which is not particularly annoying because Zander slipped away, but because Regensburg’s George was standing all alone at the second post for what felt like four years).
However, FCSP didn’t really let that throw them off track. Instead, it was getting better and better into the game with every minute, was able to win many balls, win them back or maintain them and thus created good switching moments or open positions in abundance. But shortly before halftime it became 0:2, because Jahn Regensburg did exactly one thing better than FC St. Pauli (and then no amount of good play offensively or defensively will help you): They dominated the penalty areas.

To score a goal you have to shoot at the goal

The statistics at the end of the game were 2 to 19 shots on goal, which sounds truly brutal. In contrast to FC St. Pauli, Jahn Regensburg also managed to generate goals from its good situations. For example, every second cross (8 out of 15), three out of four corners and all free kicks found a teammate. At FCSP, exactly two crosses found a teammate (out of eight), and not a single shot on goal was fired after corners or free kicks. A frightening record, both defensively and offensively.
And unfortunately, this is not the first time I’ve harped on this problem. Especially in the first half of the season, FCSP “shone” by losing duels in the important areas of the pitch, failing to get the last pass to a teammate and insufficiently guarding the opponent. So the game looks okay, but the players collectively fail to successfully implement their plans in the box. This is not so much because the decisions are too often wrong. It’s more because of the body language (which was also worrying yesterday from my point of view) and certainly also a bit because of the lack of quality.

Speaking of body language: What stuck with me most from this game was the last 30 minutes after Regensburg put the lid on with the third goal. After that, the game became more than one-sided and if there were two or three more goals for Regensburg, no one could have complained. Then you have to seriously write that it was a non-performance of FCSP. That was very hard to take. But I don’t want to apply that to the first hour of the game. At least not between the penalty areas.

I’m actually quite annoyed to write these lines, because it’s not the first time I’ve done this. A text excerpt from the match report from the defeat in Kiel three weeks ago: “This phase showed that FC St. Pauli against a defensively really strong opponent then still has a few problems with the accuracy in the passes, but also the determination to score in the opponent’s box. And Holstein Kiel, on the other hand, showed how that ideally has to work.”
And here’s an excerpt from the match report on last week’s home defeat to Hannover: “FC St. Pauli also came out of the dressing room with the better game. But it was still mostly over in front of the box due to a lack of coordination and accuracy, while Hannover seemed a bit more compelling in the decisive moments.”

What’s going on in the penalty area?

Now that this has happened three games in a row, it almost seems to be a kind of general problem: FC St. Pauli failed to be present in the decisive moments at the end of the season. No matter whether in Kiel, against Hannover or most recently in Regensburg. The problems were the same. And they were the same as in the first half of the season. The approach to the game is good, it’s pleasing. But when it comes to the really important duels, when it comes down to two-three percent more, FCSP has not been good enough.

Fortunately, that was not always the case. In most of the second-round games, FC St. Pauli showed that it can be done differently. So of course we can be heartily annoyed about three defeats at the end of the season. These defeats do not have fatal consequences. And who would have thought in January that FCSP could lose the last three games of the season without fearing serious consequences?

For the new season, however, that’s a pretty bad feeling. Because all those who wanted to “take the momentum with them” into the next season may now be hoping that the trend of the last three games will not be carried over.
Anyway, take a breath. I have the feeling that either way it will be another exciting summer for FC St. Pauli, with some changes in the squad. The club provided a first foretaste of this yesterday after the game with the farewell of no less than seven players. Especially for Daniel Buballa, this 0-3 in Regensburg including a sending-off was unfortunately a rather undignified end. I would have wished it quite differently for him. Basically, it seems that these seven players are not the last to leave the club (and accordingly, some players will still find their way to FCSP). May the decisions off the pitch be better than lately in the penalty areas on the pitch.
// Tim