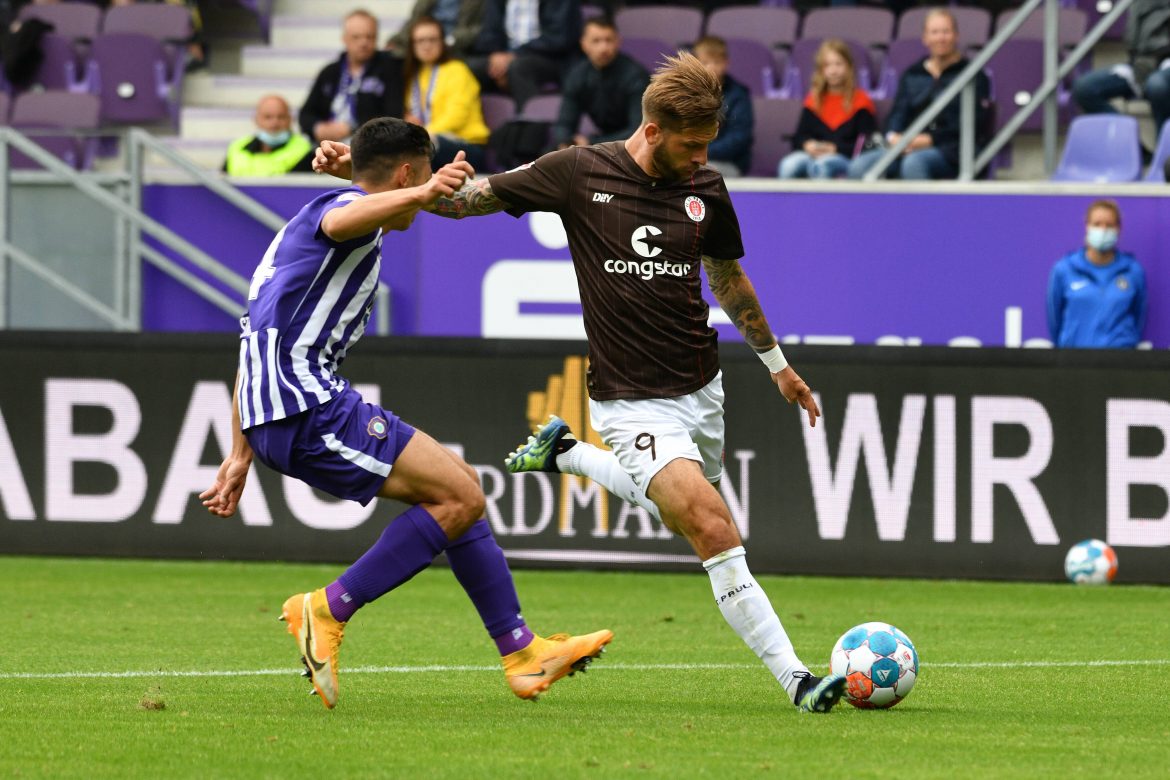 FC St. Pauli earns a point in the Erzgebirge. Although Timo Schultz’s team showed better performance, Aue had a suitable answer to FCSP’s midfield ruthlessness. This answer led to the game leaving a somewhat sluggish impression. FC St. Pauli struggled to find the sparse holes, while Aue relied solely on transition moments, which forced FCSP to make a change at half-time. Thus, the draw is quite fair.

Compared to the match against Holstein Kiel, the nimble Maximilian Dittgen started instead of Simon Makienok (who is expecting a baby soon – I soak up Anette’s Insta-stories every minute, but there is still silence). Timo Schultz explained this after the game with the difference in speed between the two players. A reaction to Aue’s backline, which was studded with air superiority but also slight sluggishness.
Erzgebirge Aue also changed their team in only one position compared to the 0:0 against Nuremberg on the first matchday: Soufiane Messeguem started on the offensive wing for the injured Nicolas Kühn.

FC St. Pauli stuck to their usual 4-4-2 with a midfield diamond but made a slight change with Dittgen upfront. The team of new coach Aleksey Shpilevski took to the pitch with a 3-3-3-1. Both teams focused strongly on the centre of midfield. Due to the many direct duels in the centre, this usually leads to the fact that not much flow of the game can be expected. And that is how it turned out.

Get the lead or cramp up!

Being successful against deep-positioned teams is and remains one of the most difficult tasks in professional football. And it is not only FC St. Pauli that always has problems with this – all other second-division teams that want to play dominant football do too. Why did that work against Aue last season? Because FCSP took an early lead then (as they did in the games against Braunschweig and Würzburg). Then the teams, which are completely geared towards avoiding mistakes and transition moments, can’t even get their game going, but have to become active themselves. If they don’t take the lead, at best early on, it will be a very unpleasant game.

However, FC St. Pauli did a lot of things in the right direction, especially at the beginning. In their usual manner, FC St. Pauli started the game better and had several opportunities to take the lead in the first twenty minutes. Right in the 2nd minute, the team showed how Aue’s compact 3-3-3-1 could be broken down: In possession on the outside, Becker went deep on the outside, pulling both the man-oriented opponent and additionally the outside centre-back there. The second outside centre-back was tied up by Kyereh’s positioning on the other side. Centrally, Burgstaller and Dittgen then showed opposite movements, which also “pulled out” the third centre-back from a central position.
Unfortunately, Maximilian Dittgen was not able to control the ball played by Luca Zander well in the 2nd minute, so that Gaetan Bussmann got in the way. Unfortunately, this was not the only situation in which Dittgen (good in counter-pressing anyway) showed good free-running behaviour and improvable ball-handling (although he can actually do a lot with the ball on his foot). It was a pity because he missed some really good moments.

However, the tactical approach was already really good. A three-man defence like Aue’s can be broken down mainly by luring the outside centre-backs out of their central positions, which is what happened in this case.

In addition, FCSP used their individual strength in dribbling (whoscored counted a total of 34 dribbles for FCSP with a success rate of well over 50% (Aue dribbled eight times)). However, it remained more with well-played situations in which something could have happened, than that there were goal attempts in droves. This was also due to the fact that FC St. Pauli showed unusual weaknesses in ball handling. In addition, it is almost frightening how much the game yesterday resembled the first game of Erzgebirge Aue (against Nuremberg). Nuremberg also started with a midfield pack and played a respectable, but not successful football. Again, it was the “problems in the final third” that ensured the goalless draw. Erzgebirge Aue seems to have developed a general tactical profile.

Erzgebirge Aue offered very little offensively. Apart from transition moments, Aue showed a lack of plan. The team fanned itself out into a five-man backline, but this did not result in any compelling situations. Things only got a bit more critical when Gaëtan Bussmann pushed the ball long forward and played the “chance” card. Funnily enough, it was exclusively Bussmann who unpacked the long balls. His centre-back colleagues Gonther and Carlson were completely uninvolved in the offensive play apart from crosses and back passes (Bussmann played eight long balls into the attacking third, Gonther and Carlson together two). This style of play can confidently be described as rather unimaginative.

However, the transition situations were largely well defended by the duo Ziereis/Medić. As against Kiel, Jakov Medić again showed a strong 62% of duels won (air and ground), while Ziereis fought considerably fewer duels but intercepted most of his team’s balls. Even more impressive in terms of duels was once again Eric Smith on the six (in a total of 17 duels, 70% ground and 100% air duels won!) His streak is broken: For the first time, FC St. Pauli did not win the match when he was involved. What a transfer flop! Borne out! Seriously, Eric Smith is an incredibly important stability factor for me and there hasn’t been a better one in this position at FC St. Pauli since Fabian Boll.

Offensively, Erzgebirge Aue offered little. In their preparation for FC St. Pauli, however, they came up with something. This defensive style of play should not have surprised anyone, as Nuremberg fell into the same trap on the first matchday. Due to the strong focus on the centre and also the apparently good preparation for the build-up play of FC St. Pauli, after a good initial phase, more and more a kind of wedge was driven into the FCSP eleven. The three offensive players were increasingly seldom played to in a controlled manner, as the pressure from Aue was mainly directed to the players who were responsible for the passes to the strikers (Smith was even completely marked man-to-man).

The movements of the eights to the outer lanes, which were drawn at the beginning, would have been a good opportunity to put the Aue defence under pressure even more often. However, this was somehow exactly the situation that Erzgebirge Aue wanted to force or that suited their own idea of the offensive quite well. Because when Finn Ole Becker and Rico Benatelli moved away from their positions and there was a loss of the ball as a result, Aue could create some danger in transition moments, as they had central space and sometimes even superior numbers. Personally, I liked Ben Zolinsiki because he moved well in these free spaces and mostly even challenged both centre-backs.

As the game progressed, Timo Schultz reacted: In the first half, Finn Ole Becker often moved to the right-wing and Rico Benatelli to the left-back position, so that the build-up on the outside was made possible and space was created in the centre for tipping offensive players. With the start of the second half, however, both players mostly stayed in the centre and thus fulfilled their counter-attacking duties better. This made the game a bit tougher, but FCSP looked more stable.

In addition to improved counter-attack protection, a change of personnel in half-time 2 also brought more contact between the offensive trio and the rest of the team: Lukas Daschner interpreted his role in the offensive much more clearly on the ten than Maximilian Dittgen, who was substituted for him. Thus, FC St. Pauli managed to create connections more often again. Some scoring opportunities were the result. However, it remained the case that none of them became really compelling. After the expected goals, the final score was 0.66 to 0.59, with FCSP creating most of the relevant chances in the last 10 minutes.

The draw is alright as it is. No team in the division will look good against Erzgebirge Aue. FC St. Pauli tried and invested a lot and, after a difficult first half, responded properly to a well-adjusted Erzgebirge Aue. However, the way Aue defended against FCSP’s routines should become something of a blueprint for upcoming opponents. More flexibility is required here, but also more radicality (such mad dribblings as from Zalazar would have done the game a lot of good yesterday).

But that all sounds a bit too negative. Because the FC St. Pauli defence has made a really good impression so far. Of course, this is due to the individual quality that was newly signed in the person of Jakov Medić and Nikola Vasilj (and Eric Smith anyway). But it is also due to smaller changes, for example in the back defence, that FC St. Pauli has not yet conceded a goal after two games. By the way, the second time FC St. Pauli played to-nil last season was on matchday 23. The opponent is identical to the next opponent in the division.