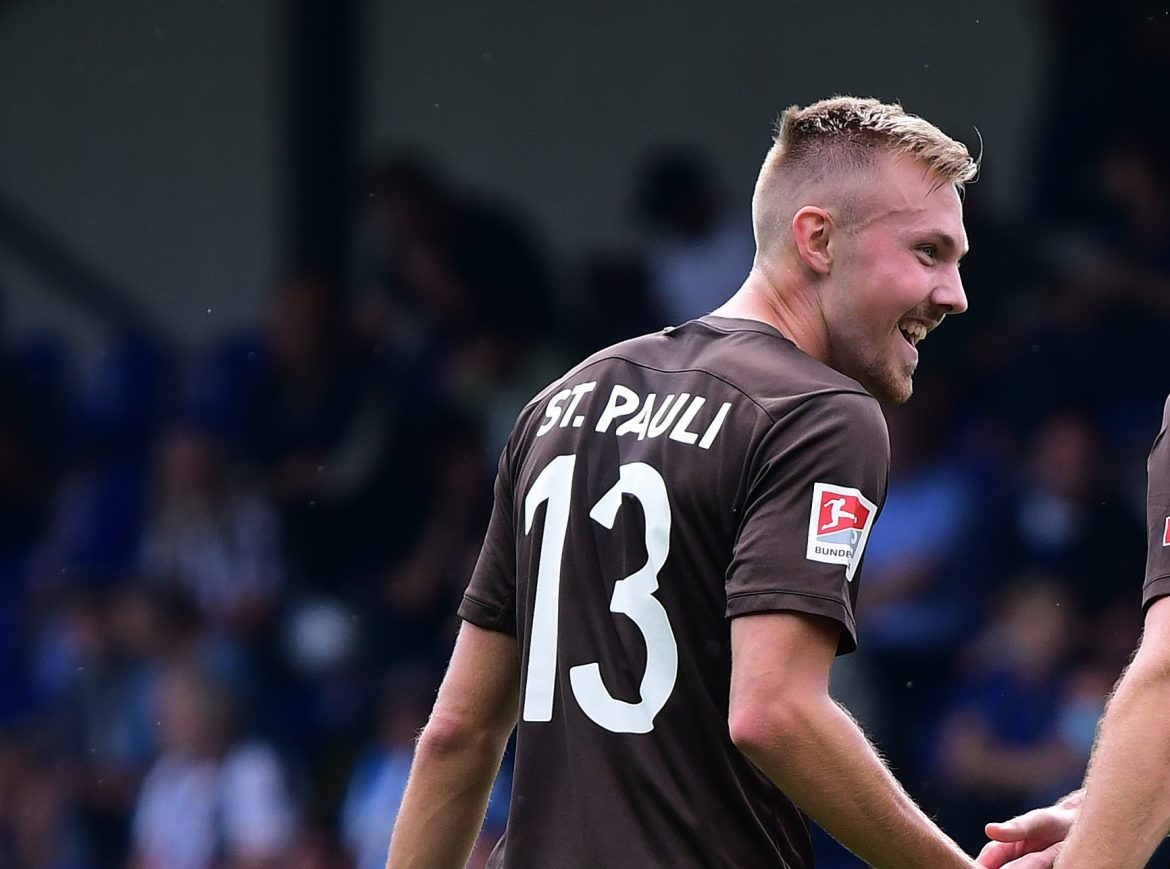 Lukas Daschner has seriously injured his knee. This is really bitter for him, also because he was as close to the starting eleven as he has ever been in the FC St. Pauli jersey. While nothing is known about the length of the absence, it is already clear that the FCSP offensive personnel cover is now quite thin.
(Cover picture: Peter Böhmer)

(By the way: We deliberately refrain from showing pictures of the moment of injury).

+++ Update, 14.45h: The club has commented on the injury in more detail, “damage to the capsule and ligament apparatus of the knee” has been determined, but an operation can be dispensed with and a conservative method of treatment has been decided upon. Club’s homepage +++

So far, the club has not communicated which injury(ies) Lukas Daschner has suffered. What is certain is that it is a left knee injury. Usually, players who have been in action for more than 45 minutes have a run-out the day after a match, while all players in the squad who have been on the pitch for less than 45 minutes have a more intensive, so-called substitute training session. Since Lukas Daschner was substituted in the 55th minute on Sunday, he was part of the more intensive training. In the process, his kneecap popped out (patellar luxation). Everyone who has ever experienced this (like me) should wince at the word alone because it is an extremely painful injury (also because a bruise quickly forms in the joint, which causes additional pain due to the swelling). Due to the injury, training was stopped immediately and Daschner was taken away for further examinations.

We will only get an idea of the downtime when it is known whether there are other, more serious injuries apart from the actual dislocation. Anything from a few weeks to the end of your career is possible, and without knowing more than that it is a patellar luxation, any assumption is pure speculation. However, since I have dealt with patellar luxation on the basis of personal experience, I will take the liberty of speculating at least a little about what kind of injury it is.

First of all, it is important to know whether the knee joint has been put back in place on its own or whether this had to be done manually by qualified personnel later on. In the worst case, this has to be done by surgery. When the kneecap pops out, it usually tears a ligament (several are possible) and the capsule. It is also possible for parts of the bone to splinter. That doesn’t just sound like shit, it is. But the worst case is called cartilage damage.
If the kneecap pops back in on its own or can be manually reset and there are no other serious injuries, no surgery is necessary. But even then it takes a few weeks before the knee can and may be bent properly again. It usually takes more than two months before the knee can bear its full weight. Unfortunately, this is probably even the best-case scenario.
Lukas Daschner has already had problems with the patella tendon once in his career. However, I could not find out whether it was also the left knee at that time. That would fit, though, because the probability of the kneecap popping out again increases significantly if it has already happened once.

I sincerely hope that Lukas Daschner only reached into a medium-full pot of shit and did not suffer more serious injuries in addition to the painful injury. As with any serious injury, I always feel incredibly sorry for the players. And it hurts especially with Lukas Daschner, as he seemed ready to take the famous “next step” after a debut season that could be described as an apprenticeship year. Daschner usually provided important impulses in the offensive when he came on as a substitute (last season he was involved in the most goal-scoring chances behind Burgstaller) and it was to be expected that he would gain considerably more playing time this season. The next step now seems to be rehab. That’s bitter.

It is unclear how long Daschner will be out. Even in the best case, FC St. Pauli will have to manage without him for some time. This is a more than unfavourable situation for everyone involved. FC St. Pauli will not only be missing an important player who has been something like the 12th man in the team: with Lukas Daschner’s injury, the already poor personnel situation in the offensive line will become precarious. With Etienne Amenyido (who could most likely take over Daschner’s role) and Igor Matanovic, two offensive players are already missing for a long time and indefinitely. The offensive lineup is now almost self-sufficient since with Kyereh, Burgstaller, Makienok and Dittgen only four fit players are available for three positions in the squad (whether Luis Coordes is an option? I doubt it). A real retooling with fresh blood for the last 30 minutes of a game, as was usually the case with Daschner, is impossible with this personnel situation.

The role behind the forwards, which Lukas Daschner mostly played on the pitch, can only be taken by a few anyway. Daniel-Kofi Kyereh fills this role very well, of course, but I assumed that he would play more like a second forward in the future. Apart from Kyereh, there are only emergency solutions for the ten. Finn Ole Becker could possibly play it, but that would require a replacement on the eight. Christopher Buchtmann played the ten years ago, but in terms of tempo, he doesn’t fit the requirement profile. Newcomer Jackson Irvine has played at ten but is still in rehabilitation training. Can Rico Benatelli also play this position? You can certainly work out for yourselves what a disaster another injury to the FCSP offence would mean.

The question arises due to the now precarious situation in the offensive. And it can only be answered if one can forecast the downtimes of Matanovic and Amenyido. Nothing is known about this, at least publicly. If both players are also out for a longer period of time, then there is almost no way around another signing. It seems that no player from the U23/U19 squad will be able to move up, especially on the offensive side.
But just because FC St. Pauli now has a completely unplanned urgent need in the offensive, a further signing could be quite difficult. Because there might be few, if any, players on the market who bring similar qualities to Lukas Daschner and are willing to take over the not-so-easy role behind Daniel-Kofi Kyereh. To be honest, I think it is rather unlikely that FCSP will find such a permanent reinforcement in the offensive. A loan deal is much more likely. But for that to happen, the players in question first have to find out at their current clubs that a loan makes sense for them (which, for example, will only become clear in the 1.Liga sometime after the start of the season).

The serious injury to Lukas Daschner and the resulting thin personnel cover in the offensive line means that FC St. Pauli is faced with quite difficult decisions. But a solution will be found here. More importantly, I very much hope that Lukas Daschner will return to the football pitch this year.

4 thoughts on “Get well soon, Daschi!”