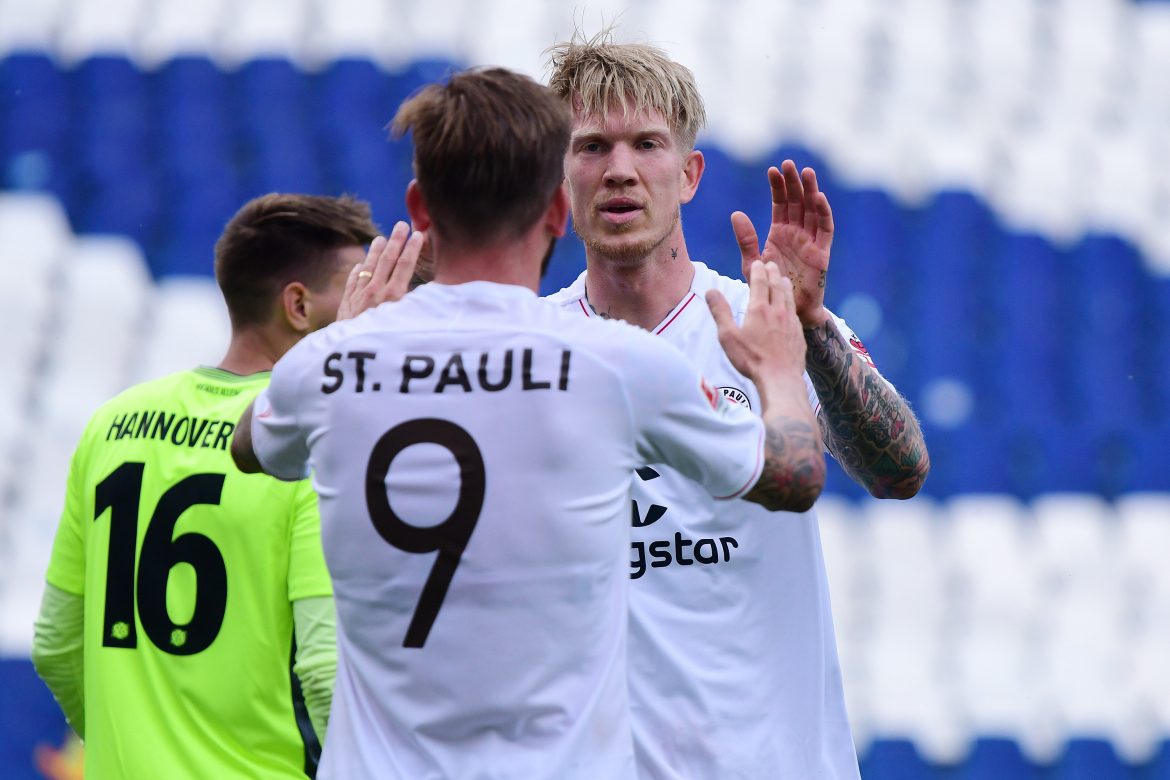 Simon Makienok was on the pitch for FC St. Pauli in preparation and at the start of the season. In the second match against Erzgebirge Aue, he was on the bench. A week later in the cup, he was again part of the starting eleven. This back and forth has less to do with his performance and more to do with the types of players FCSP needs in the forward’s area.
(Cover picture: Peter Böhmer)

That the value of strikers is only determined by the number of goals they score is gross nonsense. This has been widely known here at the latest since Lennart Thy’s time at FC St. Pauli. It is also clear, however, that scoring goals is a central criterion and strikers will continue to be measured by it. However, the requirement profiles have become much more diverse in the meantime. The composition of the FC St. Pauli squad at this position is also diverse.

FC St. Pauli has six strikers in its squad: Guido Burgstaller, Simon Makienok, Maximilian Dittgen, Etienne Amenyido, Daniel-Kofi Kyereh and Igor Matanović. Each of these players brings very different qualities to the table. On the one hand, this is not entirely optimal, as there is no direct replacement in the event of an injury, for example. On the other hand, this diversity offers the coaching team the possibility to adapt their own game individually to the respective opponent. This kind of adaptation also explains the use of Maximilian Dittgen in the starting eleven in Aue, as Timo Schultz reported after the game. Unfortunately, the options are very limited at the moment due to the injuries to Amenyido and Matanović. Nevertheless, with Maximilian Dittgen and Simon Makienok, two almost opposing types of players are available for the position next to Guido Burgstaller.

Dittgen is more of a counterattacker, brings enormous speed and can therefore also play an important role in pressing. Simon Makienok can act more as a wall player, as he is not only a target for long balls but can also pass them on with solid passing. Schultz emphasised in the post-match press conference that Erzgebirge Aue do an enormous amount of sprinting and therefore needed a strong-running player in the position next to Burgstaller – the choice, therefore, fell on Dittgen. Less power in the run-up, more passing security and also the option “long ball” were then needed against Magdeburg, which is why Makienok was rotated back into the starting eleven.

Guido Burgstaller has a different role. He is also very active in all other areas but is still the clear target player at FCSP, the type of penalty area striker. So it is not surprising that Makienok has only scored once and Dittgen not at all. This is the crux of the matter with both players: neither Dittgen nor Makienok have really made a name for themselves as goal scorers. This role is clearly taken by Burgstaller and, from a lower position, Kyereh at FC St. Pauli. So the position next to Burgstaller is currently more about a kind of “wingman”.

Prediction for the derby

Why am I actually worrying about the different types of strikers? It’s derby week and I’m excited. And questions like that about the line-up torture me even more than usual. The question of who will play up front against HSV is a crucial one in my view. Because the line-up will set a kind of direction for the game.

HSV’s central defence is pretty well manned with Sebastian Schonlau and Jonas David. However, neither can keep up with the Ziereis/Medić duo when it comes to aerial supremacy (Ziereis is still in first place in the division with 90% of headers won, ahead of a certain Lasse Sobiech, but he hasn’t had any “header monsters” to look after so far either). But the duo is also anything but easy to defeat in the air. Nevertheless, FC St. Pauli should have advantages in the air when Simon Makienok is on the pitch. On the other hand, Sebastian Schonlau in particular is not known as the fastest player, so he could have clear disadvantages against a player like Dittgen. So there are good arguments for both sides (however, with Erzgebirge Aue’s somewhat clunky defence, the pendulum swung much more clearly towards Dittgen).

The decision as to who will play next to Guido Burgstaller is more likely to be based on the definition of the team’s own tactics. Will FCSP rely more on transition moments or need the exit strategy “long oats” in the build-up play? Given the pressure that HSV is likely to unleash on FC St. Pauli’s build-up play, an exit strategy seems to make sense. Still, I tend to go for the transition moments. Because if there’s one thing you’ve learned during Tim Walter’s last two coaching stints, it’s that the so-called “Walter Ball” has its weaknesses in defensive transition moments. Advantage Dittgen (who, by the way, could become a daddy again at any moment).

3 thoughts on “Wingman wanted! – Who will join Guido Burgstaller as a forward?”