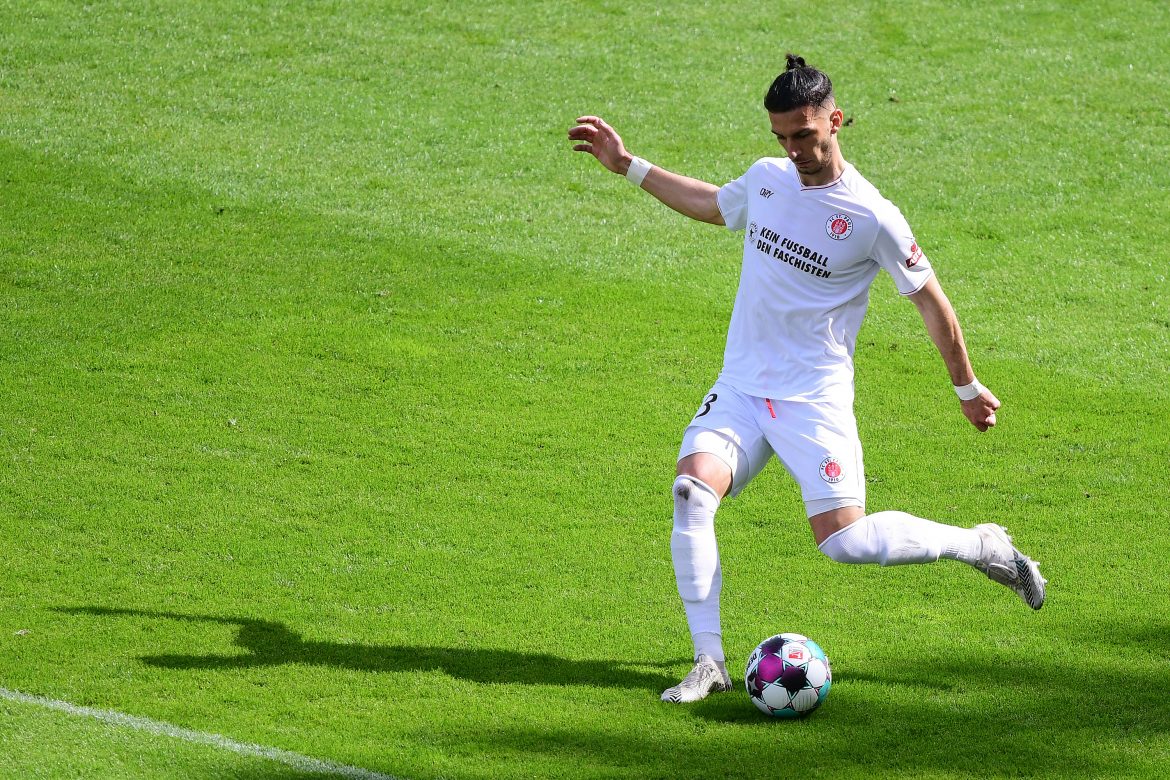 A little over a year ago, Leart Paqarada moved from SV Sandhausen to FC St. Pauli. At the beginning of the 20/21 season, he was not yet part of the starting line-up. In the meantime, however, he has become a permanent fixture on the left side of the defence and is currently arguably one of the best left-backs in the division. Time to take a closer look at Paqarada’s development over the course of the year.
(Cover picture: Peter Böhmer)

FC St. Pauli had signed a “modern left-back”, Stefan told us in the interview when Paqarada was introduced in August 2020. But we were not able to convince ourselves of this until the second half of the 20/21 season, because Leart Paqarada was a little unfamiliar at the beginning of the season. With his position, with the style of play, perhaps also a little with FC St. Pauli. Paqarada was trained in Bremen when he was young, then later in Leverkusen. At 19 he moved to Sandhausen, where he then stayed for five years. That is a remarkable loyalty to a club for a footballer, so a change is a rather unusual experience for him. He became a regular player at FC St. Pauli at the end of 2020 when Daniel Buballa’s performance dropped sharply at left-back. He then became a top performer in January 2021.

We asked Timo Schultz about this development at the press conference before the Paderborn game. “There are different types of players. Some only need two days to arrive, others three months. I think Paqa had a few teething problems (…).” – In the meantime, he has developed into a “top outside defender” because of his technical and tactical skills, and Schultz believes “he has never played with as much confidence and self-conception as he does at the moment. He also feels really good.”

But what are Paqarada’s strengths in the FC St. Pauli kit? Let’s take a look at the data:

Leart Paqarada seems to have developed from an offensively strong left-back to a complete left-back at FC St. Pauli. I have not found a single statistic relevant to wing-backs in which he is not in the top group of the division. He is currently competing with 1. FC Nuremberg’s Tim Handwerker and Paderborn’s Jamilu Collins for the top spot in this ranking.

Leart Paqarada is the left-back with the most successful defensive actions per game so far this season. He intercepted the second-most passes league-wide, won 79% of his defensive duels and in the air 63% of his duels. Those are strong, no, really strong stats. And especially for Paqarada, they are remarkable statistics. Because defensive work, in particular, has not been his great strength so far.

Because last season, but also in the years before, Leart Paqarada didn’t stand out statistically. Especially not defensively. In 20/21 he not only played fewer duels defensively, but he also won significantly fewer. He also did not intercept passes as effectively as he currently does. That was much more the case during his time at Sandhausen. This also explains why Stefan told us in the interview that there were definitely one or two gaps on Leart Paqarada’s side. So Paqarada has definitely changed his way of playing. With the defensive strengths he now has, he has become more complete in his characteristics as a left defender.

“One of the best left-backs in the second division”.

Because Leart Paqarada also shows good statistics offensively. He is in the top 5 of the division in almost all relevant statistics (expected assists, number of crosses (+accuracy), number of dribbles (+success rate), forward passes).
However, Timo Schultz would like to see much more from Paqarada in these areas in particular: “I would like to see him become a bit more effective, especially when it comes to his standards. With his crosses, he actually has the quality to get to a completely different level.”
A look at the data shows that Timo Schultz’s wish may also bring problems. Because the attempt to become more effective offensively is usually accompanied by more frequent offensive action. In his last year at Sandhausen, Paqarada was especially present offensively. He hit the third most crosses in the division, fought a huge number of attacking duels and, thanks in part to his set-pieces, had an expected-assists value of just under 10 at the end of the season, which meant second place in the division behind set-pieces monster Wanitzek (KSC) and just ahead of a certain Marcel Hartel. Defensively, however, Paqarada’s values this year are, if anything, mediocre and almost incomparable to those he currently has at FC St. Pauli.

Leart Paqarada had to change his game quite a bit and develop further in order to fit into the FC St. Pauli system. He seems to be doing that better than ever. Leart Paqarada is one of the guarantors of successful football at FC St. Pauli, and not only because of his dream goal on matchday 1 against Holstein Kiel. Schultz says that he is also important off the pitch, that he “gets involved” and “takes the boys by the hand” – At the press conference before the derby, Timo Schultz emphasised that the same players would always win the training games and matches. If you interpret the winning photos in social media correctly, Leart Paqarada is one of them. This winning gene, always wanting to win, is certainly a quality not to be despised.

Where can Leart Paqarada go from here? “I think the first division is still a bit too big for him. But if he continues to work on his weaknesses and maintains his positive sides, I think he has the potential to make it in the first division” – I still share Stefan’s assessment one year later. No one should be surprised if Leart Paqarada, who at 26 is slowly entering his prime footballing years and has just become a father for the second time, will play in the first division again at some point. He is currently taking the personal development steps to get there.

One thought on “The best left-back in the division?”