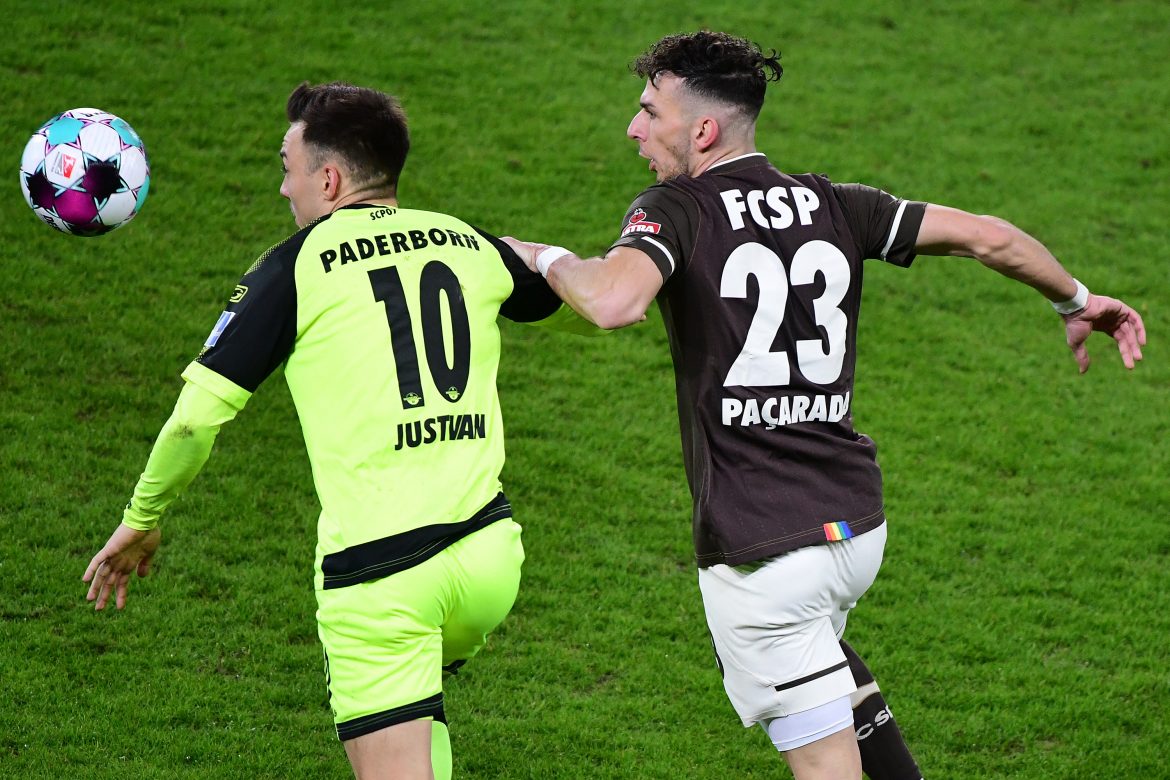 On Saturday, SC Paderborn will host FC St. Pauli. In terms of the standings, it is a neighbourly duel. In terms of play, however, the two teams are quite different. The football played by SC Paderborn under new coach Lukas Kwasniok is also very different compared to last season. One thing is certain: It will be an unpleasant game, but a lot is possible for FC St. Pauli.
(Cover picture: Peter Böhmer)

FC St. Pauli: Who can play, who is missing?

Some of the FC St. Pauli players did not train during the week. Maximilian Dittgen and Luca Zander only returned to training on Thursday. It is not yet clear whether either of them will be able to play on Saturday. Jackson Irvine, Jannes Wieckhoff and Sebastian Ohlsson will not be able to play. At least Timo Schultz said at the pre-match press conference that it would be too early for these players to play in Paderborn. The same of course applies to Christopher Avevor, who will certainly need a little longer.

Eric Smith, on the other hand, is ready for action. Although he was substituted early in the derby with slight problems, he has returned to full team training. A drop-out of Luca Zander could flush either Adam Dźwigałaor even Christian Viet into the starting eleven, as Timo Schultz told the press conference. So a centre-back and a midfielder are the options if the right-back is out. Because the list of injured players is not particularly long, but all three nominal right-backs could be out for the game.

SC Paderborn: Who can play, who is missing?

Steffen Baumgart has been on the sidelines of SC Paderborn since 2017, has been promoted twice and relegated once with the club. Now he followed the call of 1. FC Köln and SC Paderborn were faced with massive upheaval in the summer, as several key players also left the club (key players usually do this every year in Paderborn, but this summer the bloodletting was alarmingly high).
Of course, there will also be sporting and financial reasons why Baumgart left the club. But it certainly wasn’t too many annoying questions at press conferences. The questioning of SCP coach Lukas Kwasniok before the match against FC St. Pauli lasted just over 5 minutes. And that was not because he gave particularly succinct answers…

In any case, it was reported that striker Felix Platte and six-man Ron Schallenberg did not train during the week. Kwasniok believes that they “will be available”, but at the time of the press conference, it was not even clear whether they would train on the same day. Either this is a smokescreen or their use is really questionable. The only thing that is certain is that the absence of both players would definitely mean a weakening.

What does SC Paderborn have to offer?

The SCP has collected five points so far. Two draws at the beginning of the season were followed by a frenetic 4:1 at a completely chaotic Bremen. Excluding the game in Bremen, it must be clearly stated that SC Paderborn is quite harmless offensively. There were only nine shots on goal on the first two matchdays. Together with the twelve shots on goal against Bremen, that makes 21 – the fewest in the division (xG at 2.1 – only Kiel and Aue have a lower figure). This is a clear indication that despite the five points, things are still not running smoothly at SC Paderborn. This is also confirmed by the other statistics. The SCP has shown problems on the offensive. The second-fewest ball actions in the opponent’s penalty area are also evidence of this. Paderborn mostly tries dribbling (third-most in the division) and deep runs with the ball, less getting to the top via passes.

Defensively, Paderborn has allowed the third-most shots, but with an opponent xG of 2.9, the team is ranked in the midfield. In contrast to the times under the management of Steffen Baumgart, SC Paderborn under Lukas Kwasniok relies on a very passive, wait-and-see style of play in the best sense. While the team was always known for being particularly aggressive and high pressing in previous years, it is now the one with the highest PPDA, i.e. it usually attacks the opponent very late. But this game is successful: Paderborn intercepts the third-most passes in the division (leader: FCSP) and also impresses with a certain duel toughness.

Although the SC Paderborn squad is already very large, the club signed Marco Stiepermann this week, someone else for the offensive. This is also necessary because with Chris Führich (Stuttgart), Christopher Antwi-Adjei (Bochum) and Svante Ingelsson (loan ended) three central offensive players have left the club. In addition, Sebastian Schonlau (HSV) and Sebastian Vasiliadis (Bielefeld), two other central defensive pillars, have left.
So a lot is new in Paderborn. What has remained, however, is the transfer policy: SC Paderborn signs many players (the squad counts 33 players), mostly from the 3rd division and below. Not all of them make it, but when they do, SC Paderborn has usually signed strong people at a very reasonable price. Will it work out this season? Personally, I didn’t find the first games that convincing. Sure, the win in Bremen was clear in the end, but that was largely due to the fact that the completely desolate Bremen team ran into the open.

Besides Schallenberg and Hünemeier in the defensive centre, I would like to draw attention to Sven Michel (an interesting guy anyway). There weren’t many shots on goal from Paderborn this season, but when there was an attack with a goal, Michel was always involved. The attacker is relatively radical in his style of play, enormously fast and moves well in space, which makes him quite difficult to defend. That’s why we asked Timo Schultz how he sees the player and how he wants to defend against him. The answer is full of respect and you can tell that FC St. Pauli is also quite focused on this player:
“Sven Michel is a bit of their difference player in my eyes. When he plays up top, he likes to drop to the wing or drop down into the half-space and then turn up, play good balls, go for it. He has a good pace, a good left foot. That’s certainly something you can’t solve with a classic man-to-man defence, you have to be compact as a group, keep him out of the dangerous areas. That might even start with the passes, which you have to limit. He’s certainly one of the players we have to pay special attention to and who has an enormous value for Paderborn.”

SC Paderborn has tried a lot of different formations so far this season. Most recently, in the successful match in Bremen, it was the midfield diamond, which is becoming increasingly popular in the division, that brought success. Before that, Kwasniok tried out a 3-5-2 in the 2-2 draw against Nuremberg, which was not really successful with only three shots on goal (one of which was a set-piece). At the start of the season against Heidenheim, Paderborn played with a 4-2-3-1, i.e. with attacking wingers. That would also be conceivable against FC St. Pauli, as Magdeburg did. But for that, Paderborn would also need the corresponding offensive pressing. That’s why I’m betting on the midfield diamond.

If Luca Zander is ready for action, there should be no changes in the starting eleven for FC St. Pauli. This means that Marcel Hartel will be in the starting eleven again and Simon Makienok will play up front next to Guido Burgstaller. Makienok’s role, in particular, is once again exciting, as I can definitely see size advantages against Paderbon’s defence. Timo Schultz answered my question about this at the press conference, *cough*, that this is the case with all of Simon Makienok’s opponents anyway because at 2.01m he is the tallest player in the division. However, he mentions once again that the strategy with long balls can also be a promising concept against Paderborn.

At the FC St. Pauli PK, Lukas Kwasniok emphasises both the robustness and the agility of individual players and, like many others at the moment, stresses that he sees FCSP as one of the favourites for promotion. The role of favourite has thus been successfully relinquished. And that is also the right thing to do. Based on their performances so far this season, FC St. Pauli are, in my opinion, the favourites in this match. However, as we all know, this statement traditionally leads to crushing defeats. But at least until 3.15 p.m. on Saturday, I would like to enjoy the situation that FCSP is the favourite in a match. We didn’t have that for a long time until the beginning of 2021.