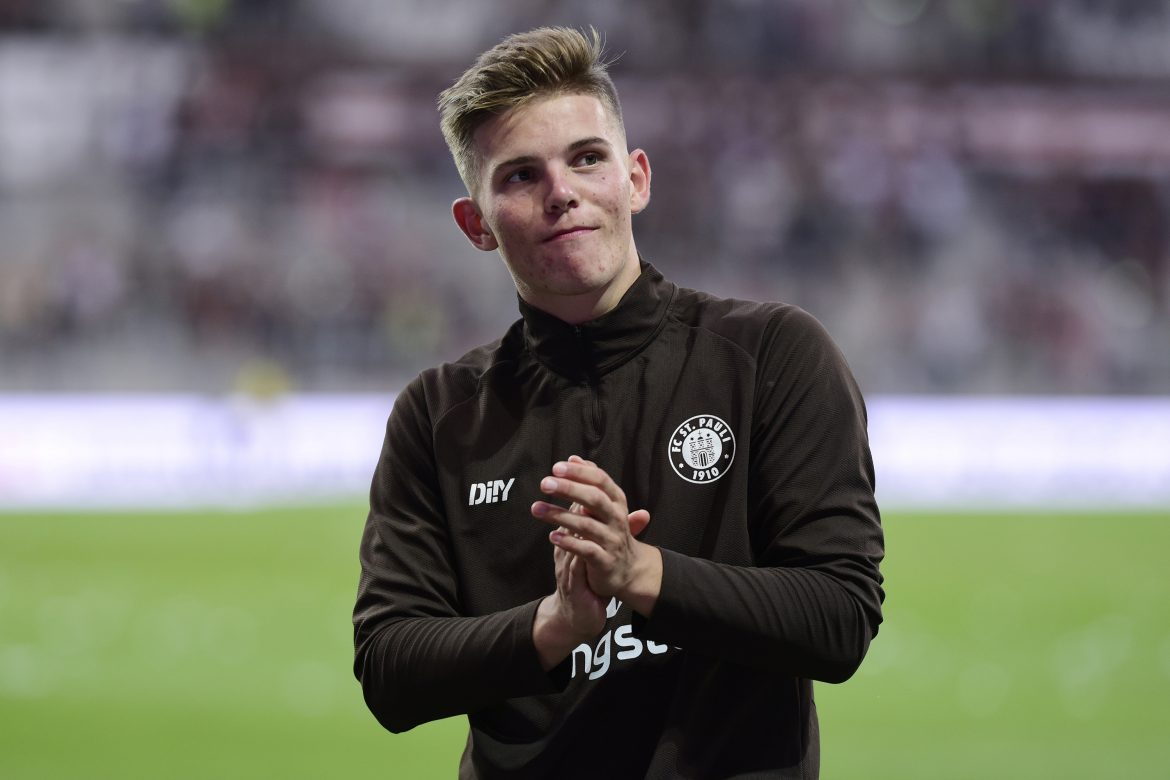 With hardly any doubt, Finn Ole Becker is one of the best talents FC St Pauli currently has. Because his contract is due to expire, there were some transfer rumours about him this summer. He would like to play in the first division. And he certainly can do. But the data also show that he has to take a few more steps.
(Cover picture: Peter Böhmer)

In the unusually open press conference this week, Finn Ole Becker told us a lot of things for the phrase bank (“I live in the here and now” – “I still have a year left on my contract and I feel really comfortable here”), but also a few things about his personal goals for this season. One of them is “to get into the box more”, i.e. to become more active offensively in general. This is something that Timo Schultz has already publicly wished for him. One goal and two assists in the season so far seem to confirm that there is already more coming offensively. But of course, that is something that just cries out for a look at the data.

What are Finn Ole Becker’s strengths?

And it’s also a question that finally got me to work on my data visualisation skills in Python. Consider it a threat when I write: There’s much more to come! I love these radar charts. And now I can create them myself. Holy Moly!

What do I do with it? I want to present statistics in a much simpler way. Up to now, I have mainly written them down. Now I use these radar charts. It’s simply clearer.

What do I show? In the example that follows, I have displayed Finn Ole Becker’s statistics. For this purpose, I have picked out what I consider to be the central statistics for players in the central midfield. I present the data for Finn Ole Becker in comparison to the minima and maxima of players in his position. Basically, the radars I show here are quite simple to read: The more colour (in this case red and blue) you see, the better the player is in the respective statistic.

So let’s take a look at Finn Ole Becker’s performance data so far this season:

Finn Ole Becker is a player who has his greatest strength in the passing game. From a purely visual point of view, I think he impresses above all with his speed of action, especially in pressure phases. Even when space is really tight, Becker finds solutions. Last season, however, when I looked at the data, I realised that Finn Ole Becker can also dribble quite well. Or rather: In this statistic, he was partly top of the league last season.
The radar shown above gives us a first trend and shows in which areas Becker has his strengths. However, the comparison against minima and maxima also distorts the picture somewhat, especially at the beginning of the season. After all, some players stand out relatively clearly from the rest of the division in individual data. Accordingly, as always in life, we need context.

How does this data compare to the rest of the division?

Therefore, I have plotted the statistics of Finn Ole Becker (red) in the 21/22 season in comparison to the median (blue) of all central midfielders. The result ensures that the data can be better classified. And it becomes clear that the described strengths of Becker are confirmed:

Dribbling and passing. These are Becker’s strengths. But this only becomes clear through comparison with the median. At first glance, the statistics in this category seem rather mediocre. But now it becomes clear: Finn Ole Becker has an above-average command of many important types of passes in the offensive game (“smart passes”, “deep completions”, “key passes”, “passes to the final third”). The same applies to the number and success rate of dribbles. Becker is only slightly better than average when it comes to assists on goal and his ball contacts in the penalty area. This brings us back to the initial question. Is this “slightly better than average” enough for your own demands and those of Timo Schultz? And has he improved in these areas, as he has set out to do this season? You can probably guess what’s coming next…

Of course, a comparison with the previous year must be made. Here is Finn Ole Becker’s data from the 20/21 (yellow) and 21/22 (red) seasons:

Well, in terms of goals and assists, you don’t really see a change compared to the previous season. It’s even more the case that he had a little more shots on goal last season. However, and this must definitely be taken into account, the data for this season is still rather thin. This also means that the three scoring points he has collected so far (one goal, two assists) could also be due to chance and that he is not really getting involved in the offensive game that much more (the stagnating value for “touches in box” also speaks against this). It would take a few more games for me to really write about significant trends here. But it is certainly noticeable that Becker’s defensive statistics (interceptions, tackling rate and number of defensive actions) are currently somewhat weaker than last season.

The data show relatively clearly that Finn Ole Becker still needs to improve in some areas. But they also show pretty clearly that he is one of the best players in the division in the areas of dribbling and passing. He is a player who can play successful passes in tight situations and thus help his team on its way towards the opponent’s goal. I can’t say whether a first division club will be impressed by that, but it’s certainly the case that many clubs are looking for players like Becker. To make the leap to the first division, however, he would have to confirm his defensive statistics from last year, and yes, offensively there simply has to be more to come. So the leap still seems a little early. He could develop into a first division player much better together with and at his current club…

12 thoughts on “Finn Ole Becker – Did he improve offensively?”