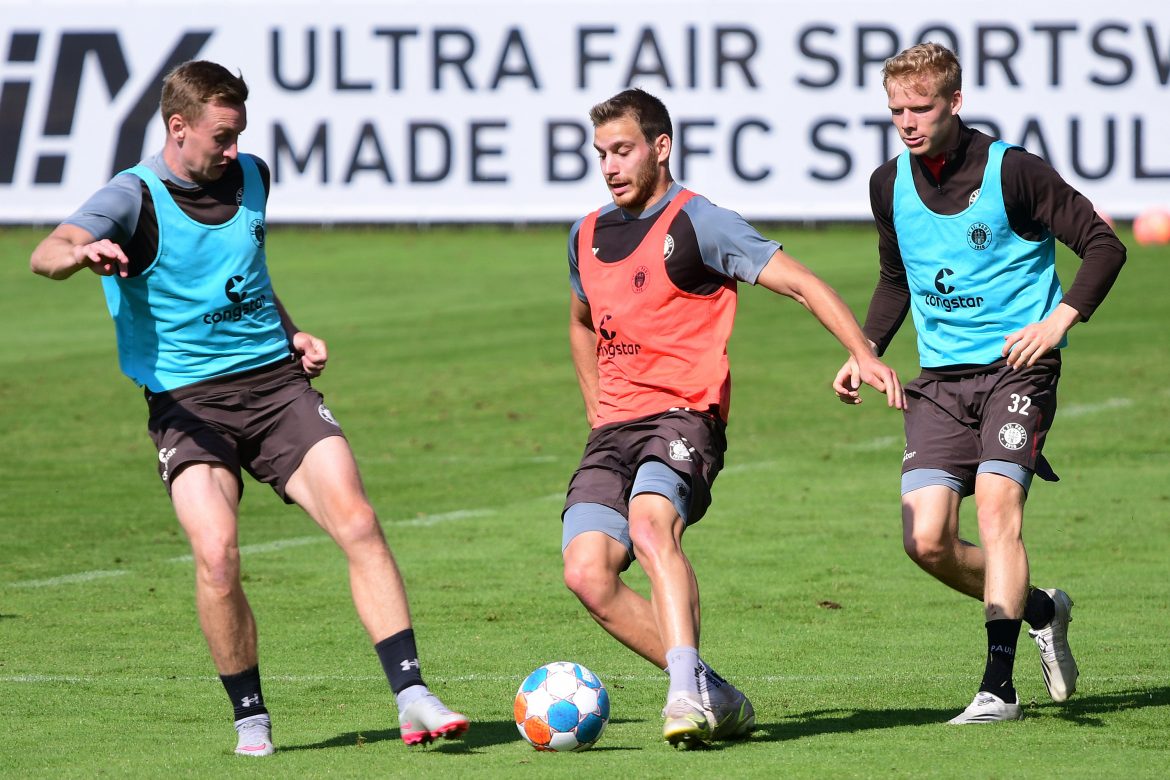 Since the “Lage am Millerntor” is always bursting at the seams, we have decided to outsource some parts of it in future. One of these parts is the “Report from Kollaustraße”, i.e. our impressions of the training, which we have been attending once a week for some time now. Yesterday, Tuesday, was no exception.
(Cover picture: Peter Böhmer)

Compared to the previous week, the training ground was a bit more crowded again. That was mainly because the national players are back. But other players were back as well: Sebastian Ohlsson is back in full team training after suffering a minor setback last week. Also present, but more from the “pulled up” category: The two young players Max Brandt and Hugo Teixeira, who were also fully present in the summer preparation. Jesper Heim was also there so that a total of four goalkeepers took part in the training and were all challenged.

The long-term injured Lukas Daschner and Christopher Avevor were not present. Igor Matanović and Etienne Amenyido were also absent. Both had at least recently returned to running training at Kollau. It is quite possible that they did so yesterday as well, but then not during the time when the rest of the team was training. Also not to be found on the pitch: Daniel-Kofi Kyereh. That was also the case on Monday. According to our information, however, there should be no danger of him being absent at the weekend against Ingolstadt.

While the fit players were already training, Eric Smith also trotted back onto the pitch, did some runs with athletics coach Christoph Hainc and dithered the ball back and forth. During a drill, Marvin Knoll then broke off training, received treatment and then went into the dressing room. It didn’t really look that dramatic, Knoll probably got hit in a duel, played a little bit more and got treated a few minutes later. Let’s see.

It was long and intensive. Before the training, a video analysis was on the agenda and afterwards, the focus was clearly on playing interfaces in the opponent’s lines.

First, there was a long warm-up of about 40 minutes, which was good for the circulation. In the meantime, some poles and player dummies (two close to each other) were set up in lines. After the warm-up, the players were divided into four teams, which then had to do various passing exercises. On a signal, the players had to turn around either to the left or to the right of the pole that had been set up. The passers then had to play a pass through the poles to the next player, who had the pass clapped back and turned around the pole himself and moved on to receive a pass from his teammate. In this way, several passes were played between the poles and at the end, one player each ran freely towards the goal and tried to sink the ball (as there were four teams, there were also four goals, which then explains why there were four goalkeepers in training). The fastest team to successfully sink the ball got a point. After a certain number of points, the losing team had to do push-ups.

After about 20 minutes, this exercise was finished and the players continued in two groups. Both groups played against each other in three teams on a small field, with two teams playing together (simulating superior numbers). If the team with the ball had successfully passed a certain number of times to their teammate, they were allowed to play on the goals outside the field and try to score a goal.

After this 30-minute exercise, the whole group continued on a super-small field. Here, the players could either shoot at a nearby goal or play their way free on the outside and then run towards the goal far outside the field after a pass had been successfully played there. An exercise that was mediocre, to say the least, but really intense due to the small pitch. As with the other exercises, it became clear that goal-scoring in particular is not exactly the FCSP’s stand-out feature.

At 1 pm, the four remaining FCSP attackers (Makienok, Burgstaller, Dittgen and Hartel) gathered at Loïc Favé’s place and mercilessly slammed the balls on goal. The rest of the team dithered around for a bit and then met for an extensive stretching session before the training day ended.

In addition to the players, there was also a whole host of other personnel on the pitch. One of these people on the training pitch demonstrably didn’t have so much trouble scoring goals: Marius Ebbers is a guest at Kollaustraße. The former FC St. Pauli goal scorer is currently a coach at SC Victoria and is looking over the shoulder of the FC St. Pauli coaching team this week.

Also on the pitch was Ole Marschall, the FC St. Pauli video analyst. He recorded the entire training session on video. He used a camera with a telescopic stand to film from a height of five metres. He probably got quite a bit of material together.

After the training session, Marcel Hartel, Leart Paqarada, Luca Zander and Philipp Ziereis met for a game of football tennis on a specially purchased board (it looks like this).

Let’s hope it’s not a serious injury for Marvin Knoll. It’s a given since he’s being paid for it, but I think it’s remarkable that Knoll really throws himself into training. At least that was my impression of him during the sessions I accompanied. I have to say quite clearly that this doesn’t seem to be the case with all players on the pitch.

Hopefully, Eric Smith will now be able to increase his intensity bit by bit. I also really hope that Etienne Amenyido and Igor Matanović are already a bit further along in their rehab and not so far away from team training. Because the number of strikers on the pitch yesterday was already alarmingly low.