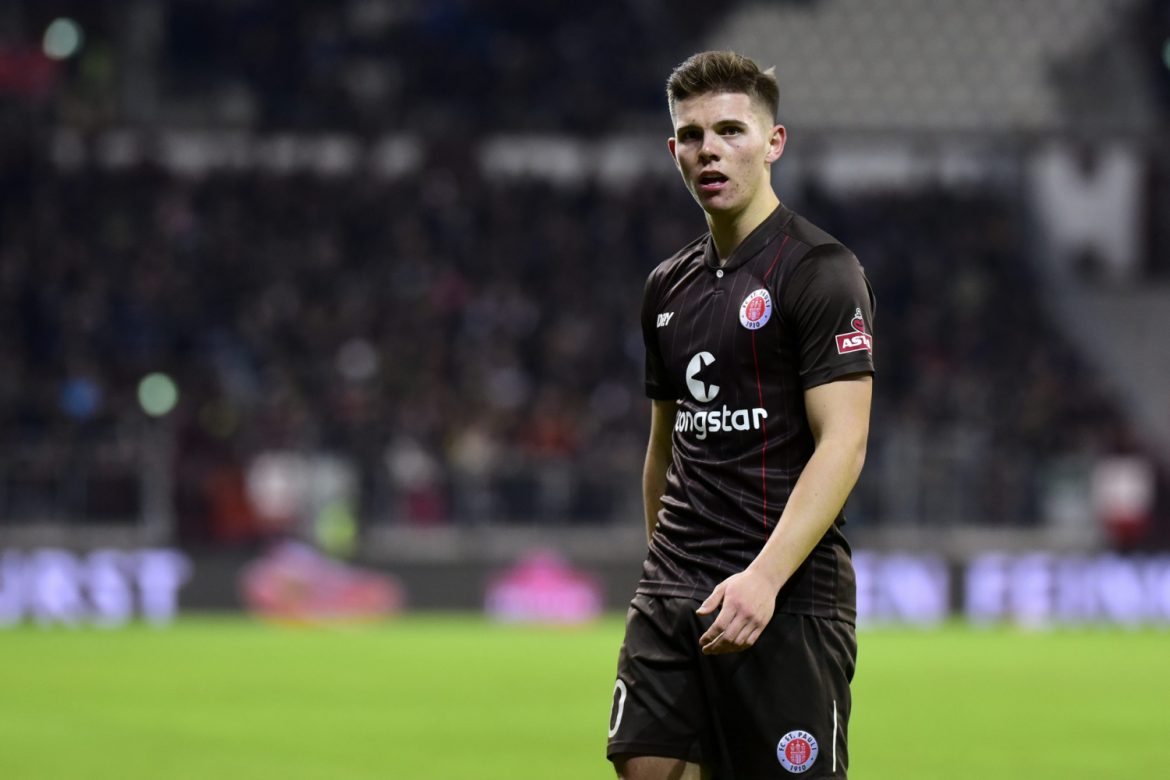 Finn Ole Becker will leave FC St. Pauli after the end of the season. He will play for TSG Hoffenheim in the new season. Not only does this mean that one of the greatest talents is leaving FC St. Pauli, but it also brings to an end a relationship that has not been so smooth on many levels recently.
(Cover picture: Peter Böhmer)

That Finn Ole Becker would leave FC St. Pauli became increasingly clear in the course of 2021. According to Andreas Bornemann, talks about an extension were still underway in April. However, a scenario was already being considered in which Becker would not extend his contract and that in this case, they would enter the last year of their contract together.
This is what happened. Although Eintracht Frankfurt was said to have made an offer in the summer, this did not seem to be in Finn Ole Becker’s best interests. The transfer window closed and Becker stayed with FC St. Pauli. According to Bornemann, an extension of the contract was not possible because Becker changed consulting agencies and the previous offer “did not seem good enough”, as Bornemann reported at the end of the year. An extension was thus a long way off.

An ideal case for a youth academy

Professional football clubs invest a lot of money in a youth academy. They have to because it is a requirement of the licensing regulations to run a high-quality youth academy. But it is also worth it for the reason that players can be developed independently and do not have to be (expensively) bought in.
Finn Ole Becker, born in Elmshorn, learned to play football at TSV Sparrieshoop and Holsatia Elmshorn. In 2011, at the tender age of 11, he switched to the youth team of FC St. Pauli. There he went through all the youth teams, so that in 2015, at the age of 16, he made his debut in the U17 Bundesliga for FC St. Pauli. His coach at the time was Timo Schultz.

Two years later, he moved to the U19s. In the same year, he made his debut in the U18 national team. Becker went through the other U teams from then on (U19, U20 and most recently the U21 in autumn 2021). In the 18/19 season, Schultz and Becker were reunited in the U19s. The U19s played a very successful season and Becker was one of the key players. Consequently, in April 2019, under Jos Luhukay, he made his first short appearance in the 2nd division in the draw against Bielefeld. Becker immediately showed that he is a huge talent. That, of course, was not lost on those in charge. In autumn 2018, before his debut in the 2nd division, Finn Ole Becker signed his first professional contract, which was chosen to be relatively long-term (it is the one that is still valid today and now expires in the summer). In the following season, Becker was an integral part of the professional squad and made 28 appearances in the division. One year later, in the 20/21 season, Timo Schultz and Finn Ole Becker were reunited.

There is no question that Finn Ole Becker is a fantastic player and a great talent. His passing skills under pressure are enormous and are probably the main reason why Hoffenheim signed him (analyses of his playing style can be found here and here). Nevertheless, it must also be noted that he has not been a regular player at FC St. Pauli lately. In the Raut system, Marcel Hartel and Jackson Irvine have been ahead. The reason for this is that Irvine is simply better defensively and has more drive towards the goal than Becker, and the latter, for his part, seemed to stagnate somewhat in his development. It will be interesting to see how he does in the 1st Division. The football there could suit him and his strengths. But he will certainly have to improve in one area or another to reach the level of the league.

Extend or sell? No, extend AND sell!

Since no agreement was reached on a contract extension, Finn Ole Becker is now moving to Hoffenheim on a free transfer. As ideal as Becker’s career at FCSP has been up to this point, the end is something like the worst-case scenario for the club. Because the club has invested a lot (if you want to know more about the logistics and finances of youth academies, take a look at this article) and now gets nothing in the end. Sure, there’s a training allowance, but that’s not a significant amount compared to an appropriate transfer fee for Becker. That’s really bitter, and Andreas Bornemann made no secret of the fact in an interview that this situation is frustrating for the club:

“Basically, players who have been trained and developed at St. Pauli and have reached their value should, if possible, give something back when they leave the club. Otherwise we can’t run a youth development centre in this style.”

I’m probably far too naive, but somehow it would have been nice if the players had also shown gratitude. Ideally, you could have had both: Becker transfers and the club still gets something for it. The contract could have been extended and an exit clause included. One that wouldn’t really hurt the clubs in the first division, where Becker wants to go, and would still bring FCSP a good sum of money (I don’t know, 3-4 million, or something like that). I can’t imagine that interested clubs would have jumped ship because of such a fixed, rather low clause.
But I’m certainly far too naïve and it’s far too romantic to think that a player or the consultant agency would go along with such deals. Moreover, I don’t even know how the talks went and whether there were perhaps disappointments on Becker’s part during the negotiations. In any case, Andreas Bornemann’s comments on the negotiations (see above) indicate that they must have been difficult.

What is certain, however, is that FC St. Pauli have now lost their two greatest talents of recent years and in both cases are getting rather little in return. Igor Matanović signed a contract in Frankfurt at the beginning of the season and was immediately loaned out to FC St. Pauli (we are not sure if this was such a good deal). FC St. Pauli was paid a colpotted € 500,000. In the case of Finn Ole Becker, no transfer fee will be paid and he will not stay with the club any longer (as he turned down a similar offer from Frankfurt).

That’s not a lot of money for FCSP with the departure of two great talents. Yes, one should not stop travellers. But from the point of view of the clubs that turn the players into professionals, it would be good if they paid for board and lodging.

It is already clear that the eight-man position at FC St. Pauli, whether played with or without a diamond, will again be a construction site from the summer onwards. That was already the case last year when Rodrigo Zalazar left the club. With Hartel and Irvine, strong newcomers arrived and it remains to be hoped that the right decisions will be made this time as well.

Despite everything, this is of course a huge opportunity for Finn Ole Becker and an important step on the career ladder, which he has certainly considered carefully. It also has to be said that after a certain point, home-grown players don’t always have it easy at their clubs and a change is virtually inevitable.
We wish you, Finn Ole, all the best for the future!

15 thoughts on “Let travellers not be delayed…”