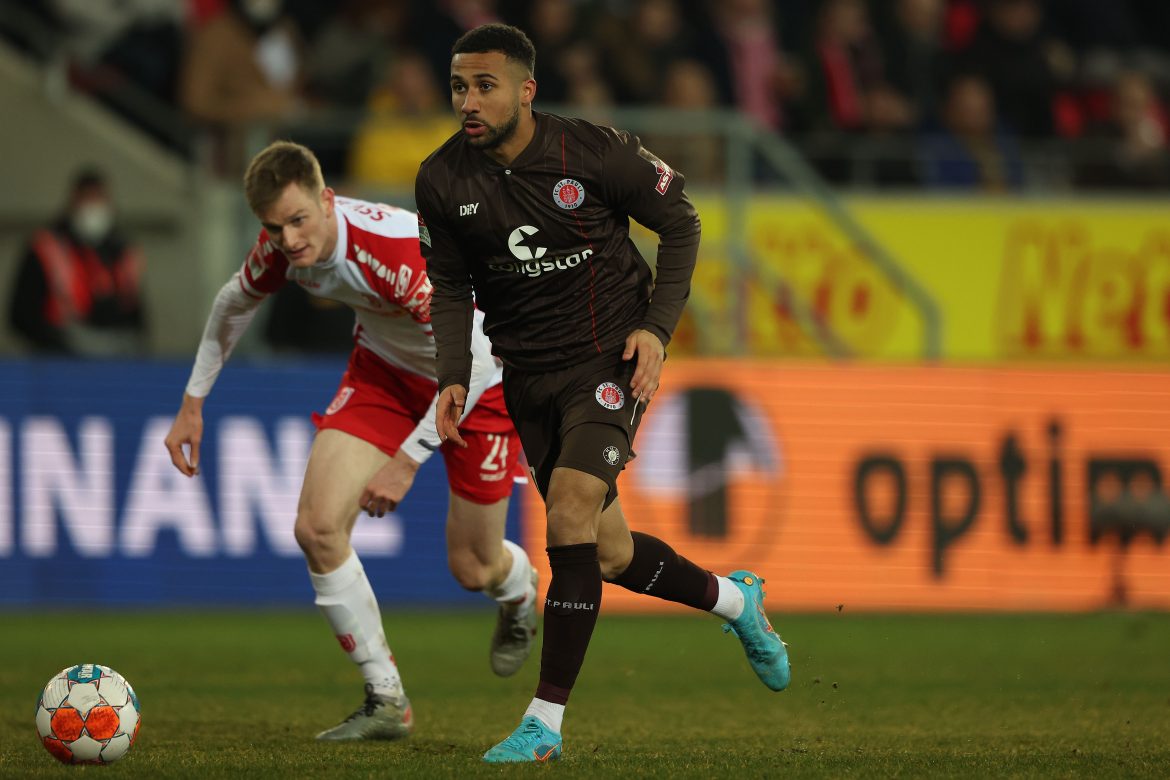 FC St. Pauli wins 3:2 at SSV Jahn Regensburg. The team finally managed to score three points again. But until the three points were wrapped up, there were mostly wild scenes in the FCSP penalty area. A game that had only one winner in the first half and no winner at all in the second half.
(Cover picture: Alexander Hassenstein/Getty Images/via OneFootball)

James Lawrence was missing in the starting eleven and the squad. And since Daniel-Kofi Kyereh took his place on the bench, for the time being, there were no changes in the starting eleven compared to the last match.
SSV Jahn Regensburg made changes in two positions compared to the last game: Benedikt Saller replaced Konrad Faber after serving his yellow ban and winter newcomer Nicklas Shipnoski replaced Erik Wekesser.

It was a bit surprising how Regensburg lined up on the pitch: Instead of the usual 4-2-2-2, the team arranged itself in a kind of 3-4-3. Benedikt Gimber fell between the two centre-backs and the wing-backs Guwara and Saller pushed up wide. Boukhalfa took the vacant position next to Max Besuschkow, albeit a little further into the offensive. Andreas Albers acted as the lone striker, flanked by Shipnoski and Sarpreet Singh.

After the match, Jahn coach Mersad Selimbegovic explained that his team had “not had access to the diamond” in the first leg and that a change was therefore necessary.

Selimbegovic also said at the post-match press conference that he thought the change had worked. FC St. Pauli had only been able to build up in a controlled manner a few times. High pressing and an opposing three-man defence are and will remain a problem for FCSP, as this match showed once again. There was no sign of the game control and concentrated build-up from the first half of the season.
But what worked well at the beginning of the game was FCSP’s transitional game, which Regensburg had boosted by their style of play. Because of the offensive position, in which all FC St. Pauli players had a direct opponent, the Regensburg defence also found themselves man-to-man. And since the positioning was very high due to the aggressive tackling, there was a lot of space for FC St. Pauli’s transitional moments.

In a crisis, one should not only work on one’s weaknesses but also reflect on one’s strengths. FCSP did that by once again consistently using the spaces that Regensburg offered in the defence early in the game. The very first two actions led to goals. Once again, the team scored early and was able to build a decisive lead.
And again it was Etienne Amenyido who scored (a corresponding article is already in the making) and took the penalty before scoring the second goal. His fourth goal in the fifth competitive match of the year. Really strong.

After the early double strike, little changed in the game. Jahn Regensburg had a lot of possession, but FCSP was able to win the balls in critical areas for good transitioning moments again and again and bring them in abundant numbers to the opponent’s goal. One of the decisive players for this was Maximilian Dittgen, whose speed suited the game enormously. In addition, a defensive three-man backline always offers space on the flanks. Dittgen was able to use these spaces to his advantage and move the ball forward quickly in transitional moments.

The first half can be summarised quite simply: FC St. Pauli had very little possession but controlled the game. Jahn Regensburg did not manage to get into dangerous areas. FC St. Pauli, on the other hand, succeeded in doing so a lot in transitional moments. The 2:0 lead at half-time was clearly too low. The team could have easily scored 2-3 more goals. Selimbegovic described his team very aptly after the early 0:2 deficit: “until the end of the half, we were like a boxer on the ring ropes, trying to avoid the last hit in the face” – FC St. Pauli did not manage the early knockout. Instead, there were another memorable 45 minutes to watch.

Selimbegovic changed his team for the second half. David Otto and Konrad Faber came in for Shipnoski and Saller. The team arranged itself again in its usual 4-2-2-2. Benedikt Gimber, who surely can only be liked by football fans who have him in their team, moved back to the six-position and David Otto was now to be found right next to Andreas Albers.

The game was even for a good ten minutes. Then, however, Jahn Regensburg took more and more control, or rather air supremacy in this case. Timo Schultz had mentioned the opponent’s strong physicality and presence in the air before the game. Symbolic of this is striker Andreas Albers, who leads the most header duels in the division behind Daniel Keita-Ruel and led a whopping 18 duels against FCSP, winning twice as many of them (13) as all the FCSP centre-backs used combined (sofascore). Cross after cross (many from half-field, Schultz had also warned against this at the PK) sailed into the FC St. Pauli penalty area. With success.

Clearly, FCSP is not a team full of header monsters. Rather the opposite. Compared to the previous season, this has even improved with players like Smith and especially Jakov Medić in the defence. Nevertheless, this rather simple method of Jahn Regensburg was enough to put FCSP in complete disarray.
From the 55th minute onwards, every fucking cross, every fucking long ball became dangerous. Absolutely frightening. And unlike before the change of ends, FCSP almost didn’t manage to play out any transition situations. At first, many situations were played out sloppily (apart from the 3:1, of course). Later in the game, the team could not even develop such situations.

The entire game now changed noticeably and took on a dynamic that was anything but good for FC St. Pauli. Tactical concepts no longer played any role on the pitch, at the latest after Regensburg’s goal. Even before that, it was more a succession of transitional moments. Now it was one-way football. Jahn Regensburg had found an effective means in the high balls and played them stubbornly, while FCSP simply did not manage to stay in possession of the ball for more than ten seconds.

FC St. Pauli conceded two goals after high balls: First from a corner kick, then because ZiereisDzwigala, Medić and Paqarada all looked bad on a long ball. Regensburg could have scored even more goals. The team fired 20 shots on goal in the 2nd half alone. FC St. Pauli couldn’t keep up for a long time but definitely scored the most beautiful goal when Kyereh first tunnelled Kennedy and then linked up well with Guido Burgstaller. Fortunately, there was this flare-up of FCSP’s attacking prowess. At first, I thought that this would take the teeth out of the opponent. But the opposite was the case: a few minutes later, the team scored again and initiated a nerve-wracking final phase.

It was certainly one of the worst games FCSP has shown this season. Yes, Jahn Regensburg did well and, thanks to their physicality, managed to completely lock up their opponents (which, by the way, also happened in a similar way to Werder Bremen during the game in Regensburg). Yes, Jahn Regensburg is certainly one of the most unpleasant opponents in the division. Nevertheless, that second half was worrying. Especially when you remember how FC St. Pauli played against Jahn Regensburg in the first half. The self-evidence with which the team pushed through its game back then is completely gone.

Timo Schultz also realised this. In the 80th minute, he seemed to resign himself and simply brought in the three players with the strongest physicality from the bench (Makienok, Matanović and Beifus) and then created a new formation. From then on, the team tried to defend in a 3-5-2 with Smith/Irvine as the double six. The attempt was ultimately successful, but not because they managed to keep Regensburg away from their own goal and also not because they played out e.g. 3vs1 counter situations well. Jahn Regensburg should rather be angry that they did not equalise.

After a brutal second half, FC St. Pauli can consider themselves lucky to have finally taken three points again. It is probably deserved because of the clear chances in the first half. But it was precisely because the team did not manage to bring about the decision early on that Regensburg was able to come back at all. Thus, FC St. Pauli wins a game that probably shouldn’t have gone on for a minute longer.

Let’s take a deep breath and shake off the game. Thanks to 41 points, the division can now only be left in one direction. After tomorrow, no one will be interested in how they came about. But unfortunately, it’s not that simple. Because there are now two question marks behind James Lawrence and Philipp Ziereis. And in general, the question mark behind the entire defence, but also the dominant offence has become a good deal bigger after this game. No matter now! Three points are three points are three points.