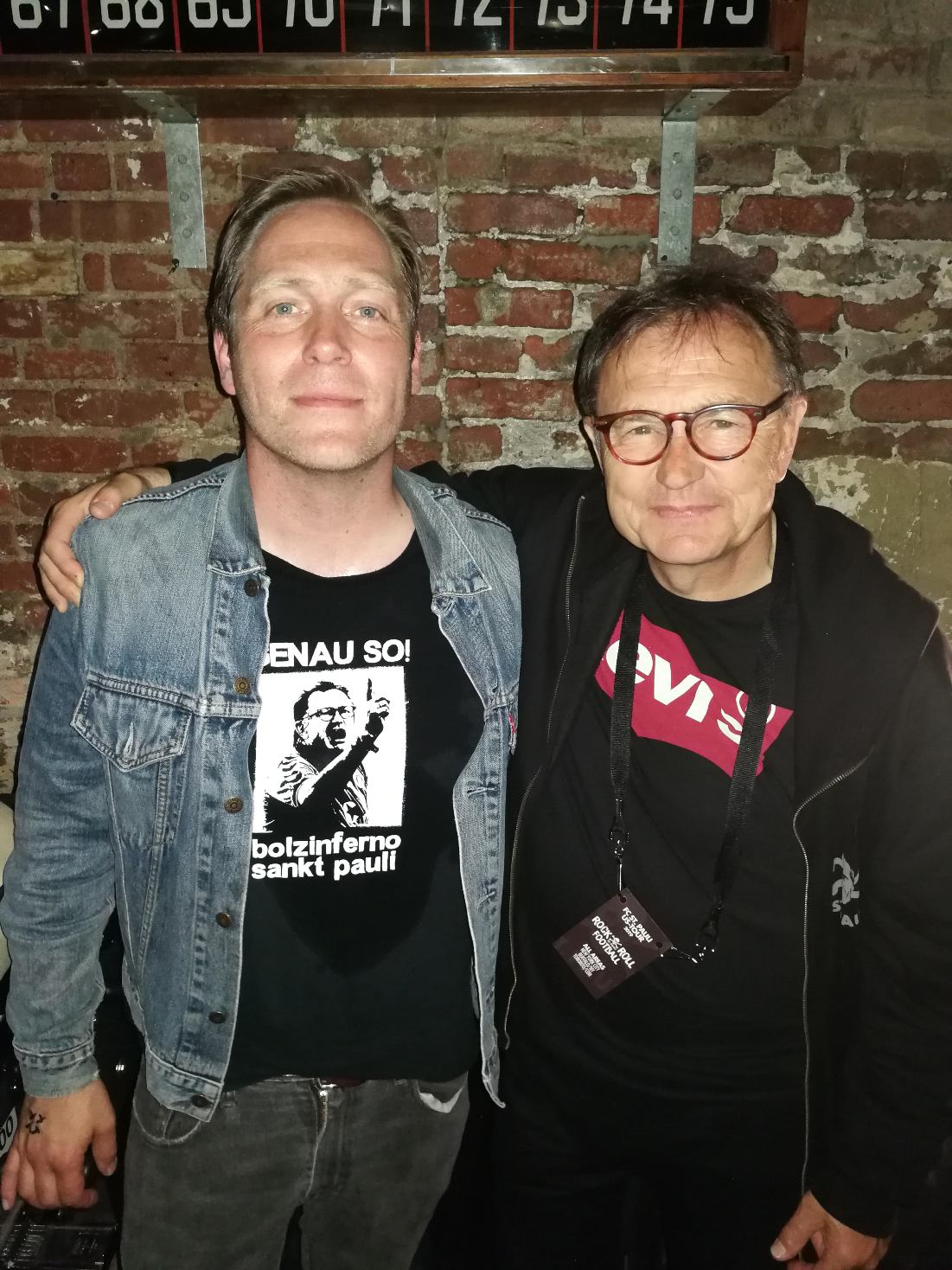 “The tears of giants are the lakes in which we recognise and renew ourselves”
These are fairly normal sentences which I think after I’ve woken up.
By Thees Uhlmann // (Cover picture: Justus P.)

Dear Jakov Medic, you are one of the coolest in the entire world.
I’ll tell you something now:
People who always achieve everything bore me out.
It simply doesn’t interest me.

For example the following sentence:
“My smart and well-behaving children are playing quite good golf behind our beautifully renovated house while my handsome husband enters the driveway with his hybrid-old-timer just to tell me that he got a pay rise in his anti-nuclear company!”
I got a lump in my throat just by reading this sentence. Although I wrote it.

Whereas the following sentence is completely different:
„Jakov broke into tears after the match in which he slipped because Union had treated the pitch with rapeseed oil just to allow them to win at all, while I screamed: “Rather like this than you!”

That’s what we love. Failure and Damnation. Strength of character and emotional boundlessness.
I always told you: If you’re crying, your soul is cleansing. And that’s actually great.
I am absolutely familiar with that but just a little different, my dear Jakov.

I make music for a living and love doing that through touring. Every evening is the same but in a different city.
Just like footy.
If the gig was super, we gather a little, enjoy ourselves and start shouting.
Just like footy.
We also have fans who enjoy it when we’re playing. They start to clap, sing along and drink a beer while doing that.
Just like footy.
And then we climb into a coach and drive away, we forget the location, its architecture and geography and focus on the next city but without forgetting about the result of the evening.
Just like footy.

But I have to tell you one thing.
When I am on tour for a long time, I can hardly believe that I am allowed to do what I’m doing and loving. It’s actually too much for my mental health. The pure joy about the fact that I am doing that is far too big for me to grasp. Still, after all those years,
And it’s getting worse!

And then, shortly before the coach hits the road – and it does always depart in time, there’s no rock ‘n roll, no  “five more minutes” or something like that – so shortly before the coach departs, I sometimes simply walk behind the back of the coach where it smells a lot of exhaust fumes so that one is absolutely by oneself and then I just stand there holding a beer in my hand and simply start crying. Okay, let’s be honest, I cry my eyes out.

I am just standing there not knowing anything about my feelings. I only know that it’s too much for me so I sniff up the snot and cry.
Then, the coach’s hooter is going and I know that we really have to go now and then I enter the coach and everybody knows exactly what I just did and I know that my band is hugging me in the exact same way as Simon Makienok hugged you last Tuesday after the match, even so, they all remain seated and stare at me until someone says: “Hey, Uhliwitsch! Did you cry again?” And then we all start laughing. Because we’re friends and also because we’re a little loony too.

That’s always beautiful.
And that’s why I went crazy when I saw you from 1910 metres away in Köpenick stadium.
This will truly have become one of the huge St. Pauli moments of my life. I knew it in a second. And that’s why I want to thank you.

Winning would have been also great but on the other hand: I don’t give a shit.

To watch someone doing what one loves is always super. And when he fails though and one can feel a universal “FUCK OFF!“ and the soul can’t cope any longer then that’s something sacral and beautiful for me.
It’s what makes us human and an individual. And I think it’s great that you’re that individual that plays footy for our beloved football club.

There are ten matches remaining and they will be yours. Through loss to the whole.
Standing in the sun all by yourself gets boring after five minutes. But letting the sun shine in a group of eleven – that’s what it is.
It is what it is!
Good luck, Jakov!
Always yours, your mate from behind the coach!

St. Pauli graphics legend “Kriller“ (Ex-Splitter, Ex-Übersteiger, creator of the Millernton logo!) also was at the cup match in Köpenick and after the match, we met in a well-known group by accident for truly just one beer only in the scene-pub  „Köpenicker Bierstube“. That’s where we always go from now on!

On tour were the MillernTon almost completely, the government, Tart-Dirk, Al Pacino of the Veddel and I.
So, I met Kriller there after a few years and when you meet at the bar, you can’t say anything else than:
„Well cooooooool!“
and
„Ödi!“
and
„You’re here and not in the Hard Rock Café Marzahn?“
and
„How great to see you again after all those years!“

He kept saying: You know, for your title picture for your column, the one with Ewald … I erased the sweat drop from your nose as it looked like a pimple and I also retouched your red eyes!“
Me: “What is retouch?”
Him: “Erase!“
Me: “Cool!“
Him: “I know!“

And then I told him that he’s still looking the same after 20 years and that he still possesses this special youth-like moving cycle which totally fascinates me. Amongst 100 humans I would recognise a Kriller instantly when competing at “Wetten dass…?“.
And somehow I think that’s absolutely BEAU-TI-FUL!

I have too many emotions but I don’t give a shit.
I’ll write more about the match at Union Berlin after the win against Karlsruhe.
A universal Fuck off and loads of greetings to all those who read this and to St. Pauli!
Yours Thees! (translated by Arne)