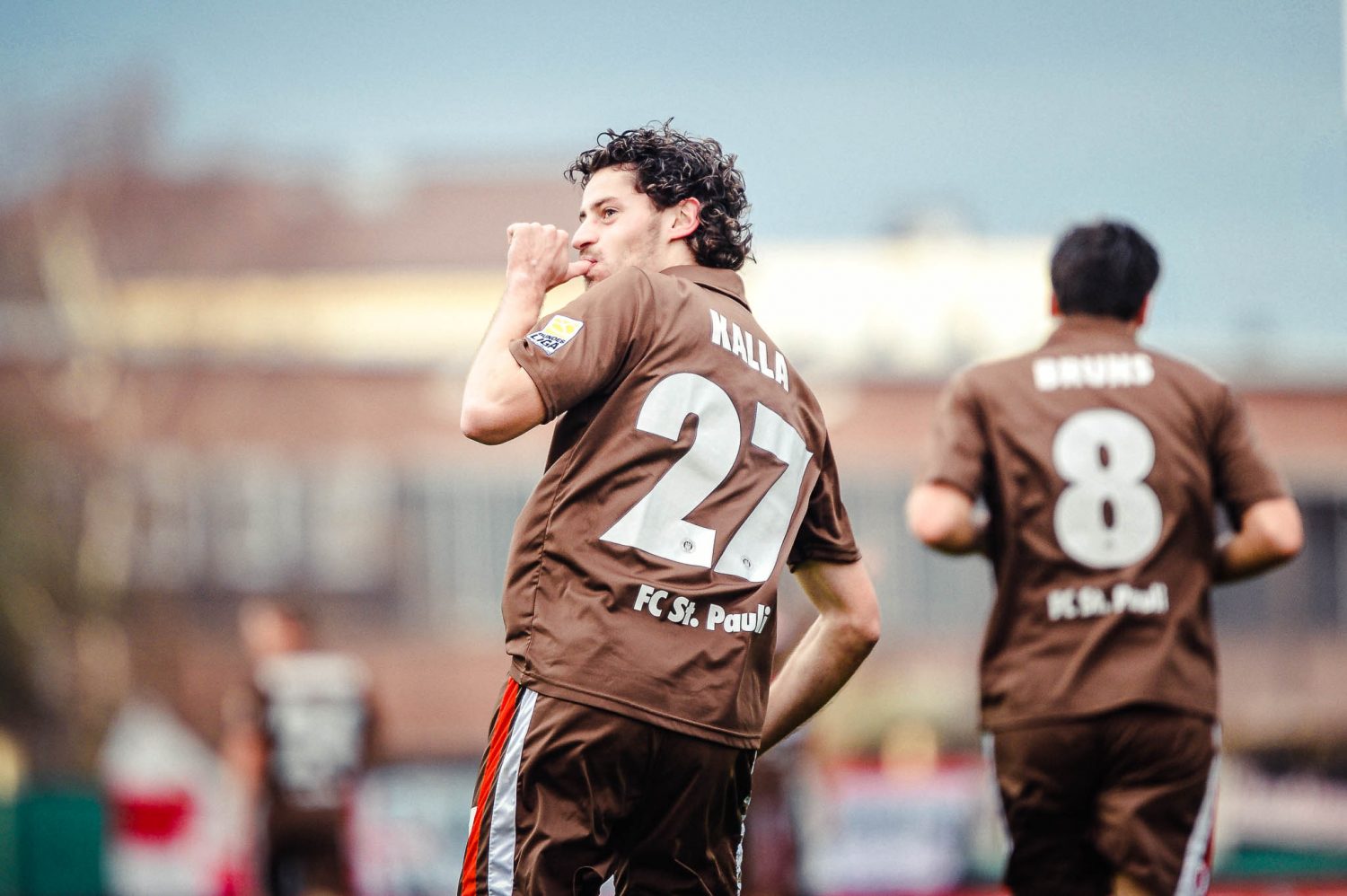 „Spieler kommen, Trainer gehen – Nur St.Pauli bleibt besteh’n!“ [Players come, managers go only St- Pauli will remain!]
There are probably not many clubs around which inconsistently try to avoid to create cult players and – at the same time – almost worship some of their players beyond the usual. Leonardo Manzi, Fabian Boll, André Trulsen, Ralph Gunesch, Holger Stanislawski – it usually doesn’t take much as a player to play themselves straight into our hearts besides a certain level of performance and … err, a little bit of club loyalty and, from time to time, a somewhat broader view.
(Cover picture by Stefan Groenveld)

The data about Jan-Philipp „Schnecke“ Kalla on Transfermarkt.de dates back until the season of 2003/04 in which he scored at least one goal in his 19 appearances in the squad of the U19 – his first full match of 90 minutes was the 2:0 win in the derby at matchday 4. There’s a fair chance that this was also the first time when I saw him playing. My own data record of watching youth players, unfortunately, does not date back as long.
However, this website does not show any other club for which Schnecke did ever play. And to keep it a good story, we don’t dig any further because nobody really wants to read that besides Cordi, he also played for another club of Hamburg for a very short time.

I cannot remember many articles which I wrote with regard to the farewell of players. Actually, I did write a piece for the Feuchte Biber, very early, when Carsten Wehlmann’s transfer to the HSV did burn a deep hole into my soul. I actually also don’t know if all that was G-rated. And then I tried to cope with Ralph Gunesch’s parting in the Übersteiger -Blog.
And that’s it, I think. And there won’t be many more articles to come, I suppose.

So, Schnecke, this text is for you as I make an exemption for you only.
A 2:0-defeat at the 1.FC Kaiserslautern in May 2008 was your first appearance for the professional squad.
Yeah, Lautern… let’s keep this in mind for now.
But you were already a well-known player for us due to your previous U19 and U23 career. Players, who actually make it from the youth’s squads into the first team were back then even rarer than today. And already in the following season, you had more appearances in the “upper” team than in the U23.
And ever since you’ve been there. Also in the first division, you had five appearances, at the Derby-win in 2011 you were a member of the squad in the Volkspark.
Not always in the first row, since the last 3-4 years, you spent more time on the bench than on the pitch but even during this time you were always there when substituted, ready to make a mark for the spectators on the terraces. Always on full-throttle on the pitch, always “all in”.

173 matches for the first team, 132 for the U23 – amongst others, you also saved a penalty as an emergency-goalie in the U23. Four goals in the second division, the first one at a 3:0 win against Union Berlin, the second at a 1:4 defeat at the Betzenberg and the last one at a 1:1 draw against Bochum.
But the goal which you should really post as a GIF at least on a weekly basis on every single Social Media-Channel is the goal you scored in May 2015 on the Betzenberg. It was the season which ended with a lot of drama on the last matchday in Darmstadt, earlier (after your comeback after your torn ligament) some wins were secured in Braunschweig (2:0), against Düsseldorf (4:0), Nuremberg (1:0) and RaBa Leipzig (1:0) which let us some very small chances for our trip to the second of the division’s table.
And then you entered the pitch as our captain – in the 47th minute there was a horrible pass in front of the visitors stand from us which was then so unluckily re-directed by a player from Kaiserlautern that you could jump in between at the border of the box and score the goal with a shoot of your left foot into the shorter corner of the goal.
Whoever was still queuing for the catering or for the toilet might surely have been quite happy on their return due to the great interim result but also wondering what the fuck you were doing close to the opponent’s box in this specific situation when they got told how the goal was actually scored?!
Doesn’t matter. Fucking brilliant!
Here is the GIF, thanks to Ralph G. for the technical support. (It should technically be automatically shown by your browser, however, it’s apparently not supported by every browser so here’s also the link)

But honestly, if it’s solely about the performance on the pitch, we would regularly (?) also celebrate other players here. But we don’t. And back then, when spectators were still allowed at the Millerntor, the addition „Fußballgott“ was only dedicated to you regularly after your surname was announced.
At the FCSP, this isn’t just achieved through performance only but also because of living and loving the club.

One has to do a lot right in one’s career when the colleagues are all trying to outdo each other at your farewells:

Saying goodbye to a legend! ?⚪ It was a pleasure working with you Mr. Schnecke

So it has come that Schnecke had his last appearance as a professional footballer at the Millerntor. And amongst all things that Corona has made worse (of course in a footy context only) the way your farewell happened is really saddening.
What your farewell would have been like! The entire stadium an ocean of tears, Schnecke at the central circle, Eva Kalla somewhere in the inner section, of course also equipped with a packet of tissues, “You’ll never walk alone” chants – but instead an empty stadium and the cheering from your teammates and a few peeps on the main stand only. This should have been so much different. With some of your former colleagues from your time with us, 1.910 laps of honour, an emotional speech at the stadium mic, more chants, more hugs, more tears. Nobody dares to leave, neither on the pitch nor on the stands because this would end something that nobody wants to end.

And of course, I join Philipp Heerwagen who stated that the day of your “real” farewell will come. And hopefully also the “News from the elder ones” update that you could agree on a new cooperation with our club in a new role.

You’ll never walk alone, Schnecke.
Thanks for everything!