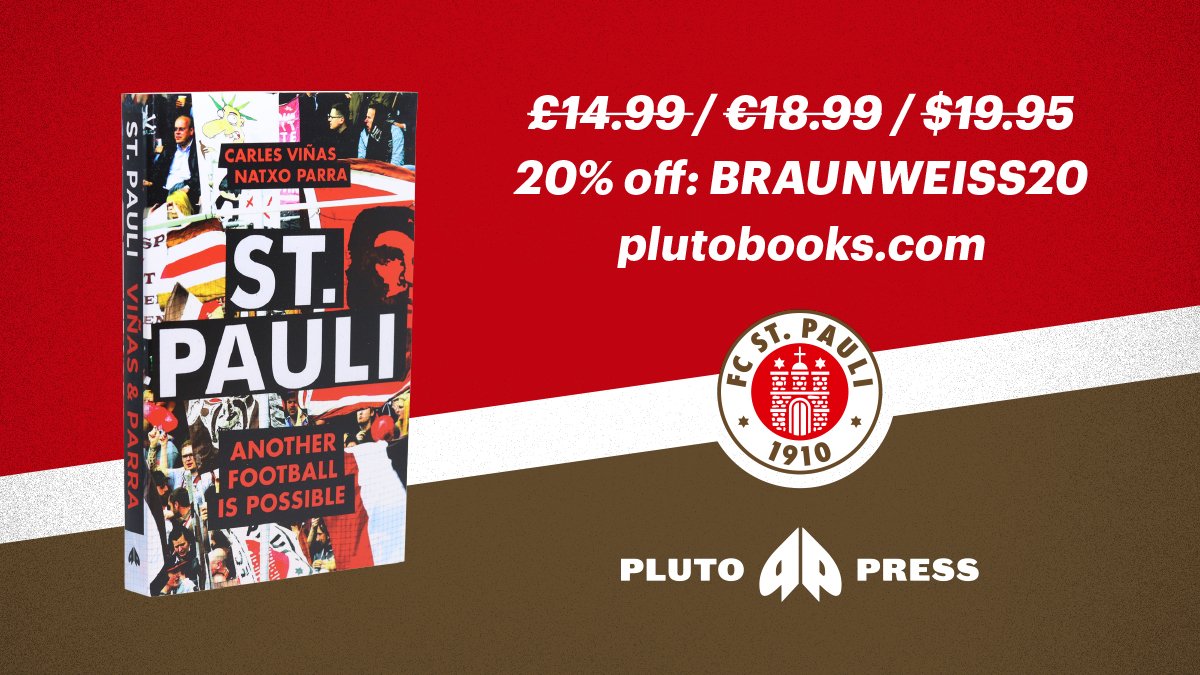 A new book about FC St. Pauli? – Put it to all the other ones! Or not, though?

On Tuesday, 20th October, a new book about FC St. Pauli is published. Again, one is triggered to say. But to be more precise, the English translation of the book “FC St. Pauli“ by Natxo Parra and Carles Viñas, already published in Spanish in 2017, is being published on that day. The English-language copy claims to especially inform the extended international readership about the history and spirit of the “cult club“, which successfully resists the temptations of modern football. Beside a preface by Deniz Naki and an introduction, the book consists of 241 pages about the club in the course of time. The Millernton did already read the book for you and tells you whether the book is worth a read and for whom.

You can order your copy directly at PlutoPress either as a paperback (which will include a free eBook) or as a pure eBook only. If you use the code BRAUNWEISS20, you’ll get a 20% discount.
And the very best: Amongst all fans who comment until 7.10 pm (German time) today how high we’re going to win against Nuremberg, we’ll raffle three copies of the book (thus, please provide a valid email address).
(Raffle is over, congratulations to Luquer, Knurri & Mel.)

First of all, I like the fact that the title of this English translation apparently does not follow the abomination of the typical German non-fiction format of a catchy title and then a question that somehow answers itself. Instead, the book is simply titled  “St. Pauli“ combined with the very promising subtitle “Another football is possible.” (In the German language, the book would probably be titled: “The unique cult club St. Pauli. How a club from Hamburg enables another football”…). The book then begins in the familiar approach of an informed non-fictional book, through chronological processing. It is divided into a total of five parts which tell of the beginnings of the club in the 19th century, the club under the swastika, the beginnings of the Pirates of the League in the 1980s, stands with burgeoning political awareness, and finally the growing attractiveness of a political clubs across national borders.

What’s in the book?

Of course, we cannot reflect the entire content of the book within this review, simply because the book deserves to get bought. However, we’ll tell briefly about a few things which reflect the content pretty well.

As such, while reading along, one learns a few things about the beginnings of the „English game“ in Germany, which was first not backed by a majority because it was deemed to be a moral hazard. Also, the origin and the history of Hamburg and even more precisely St. Pauli is discussed. In detail, the authors work out how St. Pauli decisively awakens through the harbour and the associated jobs as a labourer’s city district in the 19th century while those who can afford it move to the Elbe suburbs. For those familiar with the district, that’s of course not much news; however, for the international readership which might not be as familiar with the districts spleens and history, the book might offer reasonable background information about the city and its people as well as the political past of the district. Also, that football was played in a club in St. Pauli well before 1910, namely in the St.Pauli gymnastics club, is of course not untold.

The history of the FCSP from its beginnings as a bourgeois club, its football under the swastika, as well as its football before the introduction of the Bundesliga in the 1960s and 1970s is traced in great detail. Also, the book reports about important personalities in their respective contexts. Nevertheless, the book will only really pick up speed when the revolutionary impulse of the Hafenstraße squatters* and with it, the Jolly-Roger-flag are brought to the stands at Millerntor in the eventful 1980s. These facts are then placed in the context of contemporary history. Backed by proper research, the authors report about the socio-political dimension of squatting as well as the German anti-nuclear-power movement. From then on, FC St. Pauli was regarded as having a different approach towards football and their supporters as other types of fans within the football landscape, even though this status had yet to be enforced – partly against the will of the established fans. It was not for nothing that the so-called Hafenstraßenblock was finally set up on the Gegengerade, precisely because there was still space available and the other existing fan groups did not have to be displaced from there. As we all know, those guys were still standing in the Nördkurve (sic!). Whether this charming translator’s error will also be published in the final edition of the book has yet to be waited for. For this review, we were provided with the uncorrected proof of the book and this term, which was constantly appearing throughout the book, was always triggering a smile in my face (see below why). In the following chapters, the ongoing process of democratisation of the club and its departments is described, as well as the social engagement of the fan scene and certain players respectively (e.g. Benny Adrion or Marius Ebbers).

Another important aspect is then described with the appearance of the Ultra-movement which marked another turning point on the stands of the Millerntor. In a very detailed manner, the development of Ultra sections in the Italian context, and their political linkages are described and it’s portrayed, how Ultra Sankt Pauli (USP) formed at the Millerntor. Very informative.

It’s also emphasised in the book that with an average of 30%, the FC St. Pauli’s is amongst the world-leading clubs in regards of female supporters in the stands. What appears rather obvious for us is explained with the clear anti-sexist statement of the fan scene by the authors which is particularly highlighted next to anti-fascist, anti-homophobic and anti-racist attributes. That a clear stance against sexist behaviour in the stands has still to be enforced actively up to the day is however not mentioned by the authors. The 17th chapter of the book dedicates itself to women’s football at the Millerntor from its beginning up till today (However, in the book, only one particular fan-club of the women’s team is mentioned although there are at least two nowadays!).

Further attention is paid to the emergence of diverse international fan-clubs of the FC St. Pauli over the years which are introduced by describing those from England, Scotland, Ireland and Spain. What arose out of disappointment about the increasingly commercialised football in the respective home country, is now bearing very welcomed fruits with a variety of charitable activities which encourage imitation.

How should the book be classified?

In principle, the book follows a dual approach. In addition to the contemporary historical dimension of the city of Hamburg and the St. Pauli district, the sporting history of the club is always included. Thus, the stories of well-known figures at the Millerntor are traced, as well as the rather moderate sporting performance of the club in various divisions over the decades. As the book was already published in Spanish in 2017, it ends in its presentation with Ewald Lienen as coach, also the derby victory of 2011 is of course still described as a unique event after 30 years of hard times…

In general, the book is more like a scientific publication than a simple non-fiction book. All the illustrations appear broadly researched and are provided with numerous references. What is very much to be welcomed on the one hand, because the page strands, sometimes continued in footnotes, are extensively provided with source references, on the other hand nevertheless sometimes disturbs the flow of reading a little bit. Anyone who reads all the footnotes carefully will sometimes be surprised at the considerable number of redundancies. However, redundancies are also well-known for their didactic benefit 😉

Who is the book for?

Those who think they already know everything about the club, but have not yet read a book about it, will certainly discover some surprising facts. Thus, the book is also worthwhile for long term supporters. However, whether its detailed knowledge will turn even those readers into fans who previously knew little or nothing about the club is questionable, as the wealth of detail in the work can sometimes be overwhelming. While reading it, I also wondered whether the book actually remained largely descriptive, as the scientific claim literally cries out for a bit more of analytical classification. But this is precisely what happens in the epilogue in a very satisfying way, when modern football is critically analysed and associated with Marx’s alienation, Habermas’s refeudalisation of public spheres and Gramsci’s cultural hegemony, and provided with a spicy critique of neoliberalism. That then also calmed my inner sociological nerd (Nörd! This term sounds like a Hamburg slang term of “nerd” to a German ear and thus always triggered a smile to my face as written above). With a clear conscience, I can therefore make a clear reading recommendation. With this book, the club also receives a future standard work which is very suitable for conveying the values of the club to non-German-speaking players and which should perhaps be placed in the locker in the dressing room when new players are signed in the future, so that future players are better off than Andreas Boller was in 1992 (in order to be able to understand this reference, it is particularly recommended that you read chapter 9…).

8 thoughts on “Book review: St. Pauli. Another football is possible.”