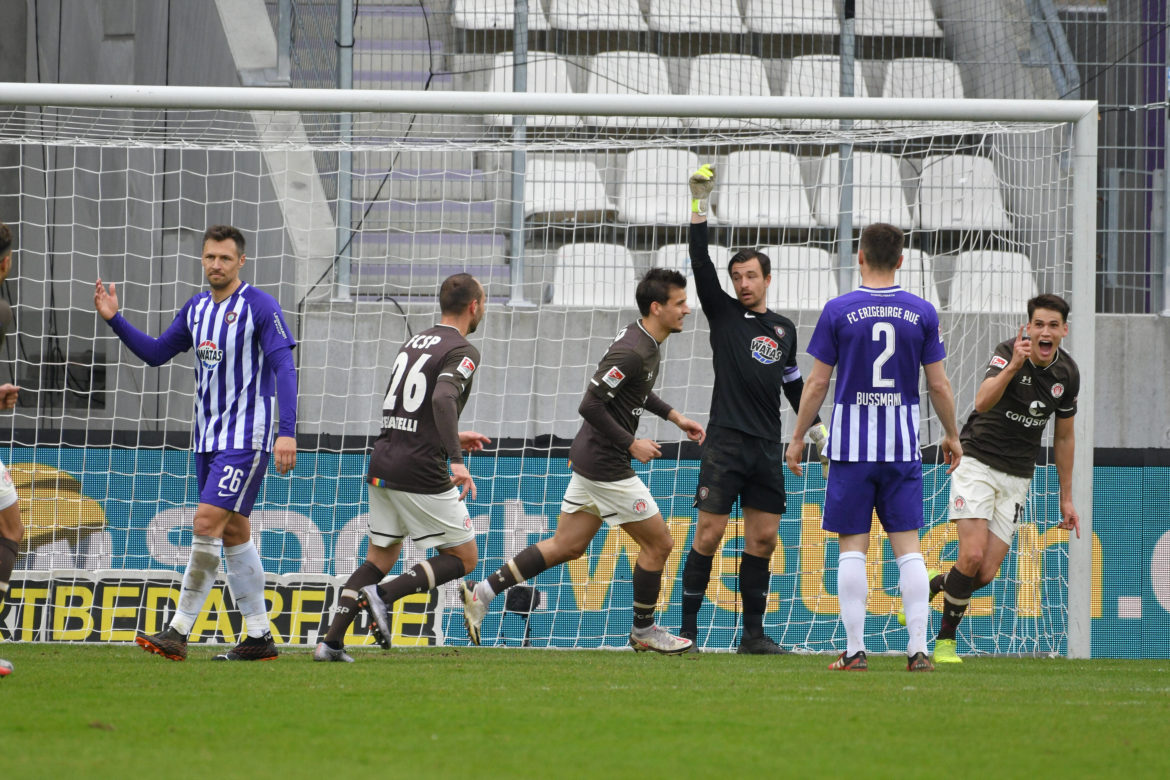 FC St. Pauli wins at Erzgebirge Aue. In a way that once again leaves me quite speechless. Therefore, no tactical analysis follows, just celebrations. About an FCSP I haven’t seen like this for about a decade.

(Addendum: A bit of tactical analysis and even more statistics can be found in this second text).
(Cover picture: Bert Harzer/Eibner-Pressefoto/imago images/via OneFootball)

It simply continues exactly where it left off. With the same formation and the same line-up as against Braunschweig, FCSP also played in the Erzgebirge. And just like against Braunschweig, FCSP was simply superior and didn’t give Aue the slightest chance from the start. Once again, a football match developed in which FCSP only failed to take control in a few moments.

For example, the counter-pressing that FCSP plays. It is now the best in the division. With players like Finn Ole Becker, Rodrigo Zalazar and especially Omar Marmoush, the team goes on a kind of chase where opposing teams would probably prefer not to have the ball in their own ranks and pass it more or less voluntarily. While at the beginning of the season the team tried to win the ball with a high pressing, this style of play is now used almost the entire game.

This high and intensive pressing works so well because FCSP has managed to create a kind of balance between offensive power and defensive stability. When the ball is lost, the opponents no longer have enormous spaces, as they did in the first half of the season, and the back defence is in place. The players can only counter-press so consistently because the timing and the distribution of space are so much better than in the first half.

Roughly speaking, the many ball wins result in two types of possession play: offensive transition moments and positional attacks. And both types of attacking play are currently enormously strong. And it is precisely this combination, that FCSP masters both types of attacking play and can develop scoring chances from them, which makes it enormously difficult for any opponent to defend them.

When FC St. Pauli keeps the ball deep in their own ranks, they have developed a few ways of getting the ball into the danger zone. They try to overload the outer lanes. Or Finn Ole Becker is put in an up-tempo position via a falling offensive player who claps a ball out of defence. Or Rodrigo Zalazar takes care of it himself so that he can get open via dribbling. Or, and this is what makes FCSP’s attacking play so dangerous when the spaces are tight, a deep ball is simply chased onto the fast offensive players.
That is already really strong, but FC St. Pauli is even stronger in offensive transition moments (as both goals against Braunschweig showed, for example). This is actually the only component that has been good all season. But because the opposing teams can no longer concentrate on defending FCSP well in transition moments, but also have to have a plan against their positional attacks, can no longer switch so well themselves and generally get pressure everywhere on the pitch, FCSP is really successful.

That’s probably all a bit much adulation. My glasses are certainly a little very rose-tinted, so I overlook the slight weaknesses that continue to exist at FCSP (for example, that Aue wasn’t completely and utterly run into the ground unpointed early on either). But I’m happy to do so. Because it’s just really unusual what FCSP is currently showing.

If there has been one constant for FC St. Pauli over the last ten years, it is that they have been a rebuilding opponent for teams that haven’t done anything at all for months or for relegation candidates that have been shaken by injuries. Then it’s the consistently weak games after good ones. This carelessness, seemingly based on the players’ feeling that they now know how things should go and that three to four percent less would be enough to achieve the same result, only to get punched in the face and then talk about “having to show a reaction”. This negligence has long been the DNA of FC St. Pauli. Yes, that is deliberately in the past tense.

Those defeats in Aue and Heidenheim, season after season, that was the perfect description of FCSP’s play. That the team would travel to Osnabrück, for example, and breathe life back into an opponent that had been lifeless for umpteen match days with a non-performance was a surefire bet. And now the team goes there to these places and tears everything down, shatters every negative statistic and shows a completely changed face that impresses me deeply.

I don’t want to say that from now on there will be no more defeats like that and that we will mow down everything that gets in the way. But I have the feeling that a long-standing trait of FCSP has changed a lot.

Even if the season is actually a lot of crap because of Coronavirus, because we are not allowed to experience this change of heart in the stadium, it would almost be desirable for it to have 5-6 more match days. Where the journey could still go then is well known to all. And of course many will ask themselves what would have become of the season if there had been more than just one point in the games against Osnabrück, Braunschweig and Aue in the first leg of the season. But would there have been the readjustments in the winter? Would the current formation have come into being at all? I believe that this phase was necessary to get to the current one.

That leaves us nine points behind with six games to go. That is not manageable, not catchable. Or can it? In each of the last three years, 57 points were enough for third place. There are still 18 to go. The FC St. Pauli has 41.

Go with the flow!
// Tim (translated by Arne)