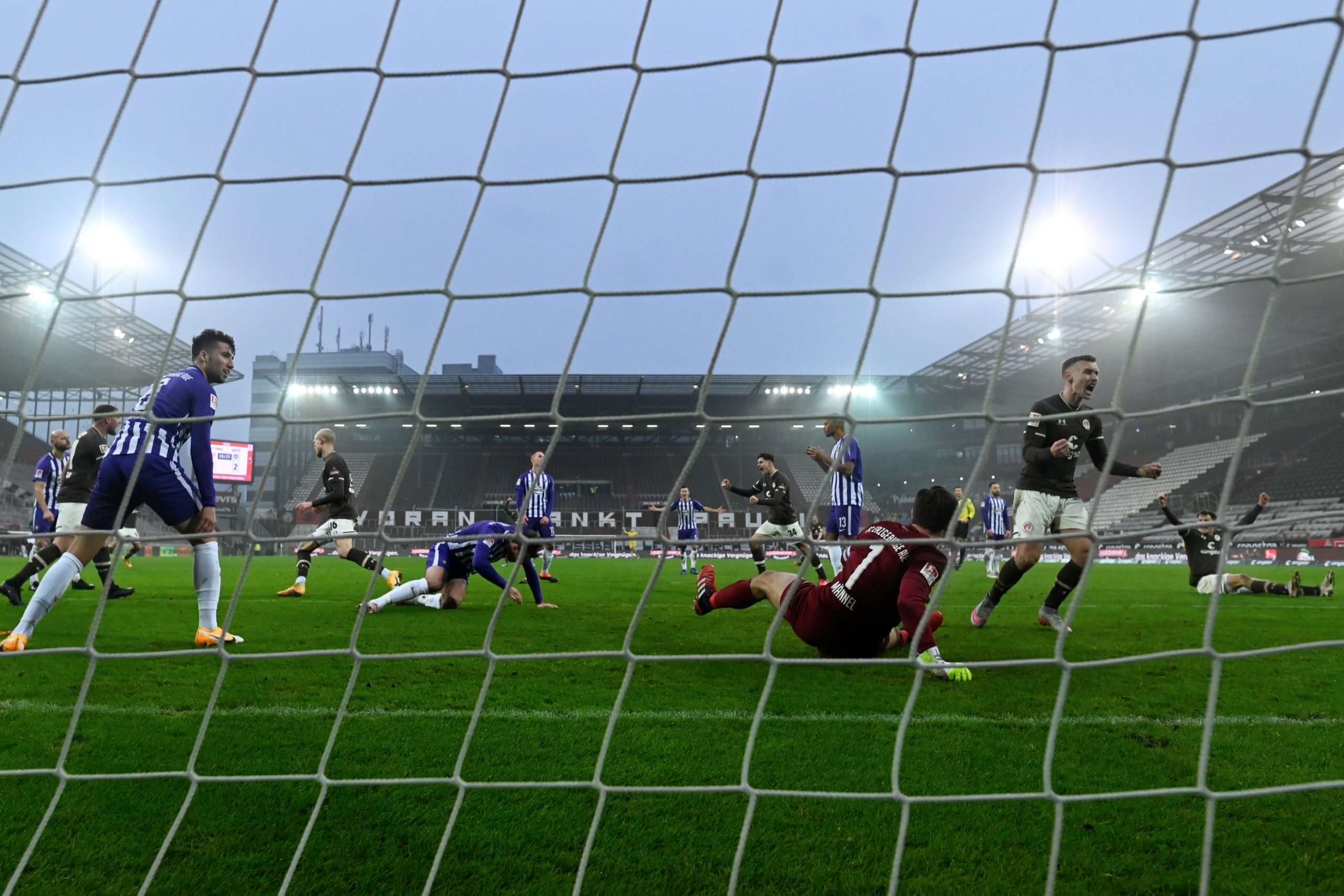 Framing. Did you ever hear of that? In other relations, certainly. The way how a piece of news is put determines how the recipient takes it. And “scored at the eleventh hour” is thus the “half-full glass” – to frame today’s match. “Just one point for the penultimate of the table” would be the “half-empty glass” and we’d like to point out now why we chose the first option.
(Titelbild: Oliver Hardt/Getty Images via OneFootball)

Already in Tim’s pre-match report and in the article in which the goalie was challenged, the four substitutions of today’s starting line-up were already predicted, however, for the sake of completeness:

Svend Arvid Stanislaw Brodersen starts as the goalie and substituted Robin Himmelmann. He’s 23 years old, started to learn how to play football at the age of four at the FCSP, he then -in between – played for the ETV before he returned to the FCSP. How was is put brilliantly by someone? You really wish that it works out for him. So far, a 4:1-defeat in Cologne and a 2:1-defeat in Kiel were to put as results into his resume.

A perfect half. Aggressiveness, courageous built-up play, ideas and vitality. A sure-bet chance for Philipp Ziereis via a header after two minutes only.
And then, Finn Ole Becker takes the ball, with his speed, he easily passes the first opponent, he then passes a catastrophic ball to the next opponent, loses his orientation on his way back and then Aue takes the lead by 1-0. The first ball towards the goal of Brodersen, and no chance to defeat the ball which goes flatly into the corner.
Fuuuuuck! (This was somehow what left Becker’s mouth seconds after that, to see in a macro shot at least when you’re capable of lip-reading.)

An effective hit.
And it got even worse: Ziereis suddenly held his groin and had to be substituted shortly after. I (Maik) have to admit that I had to watch the match via sky today (for reasons: kale dinner at my mum’s) – and when Buballa was substituted for Ziereis the match commentator wondered “excitedly, how Buballa will respond to his previous removal on the pitch now”.
Holy cow… to bash commentators is as bad as to bash the referees, but to be honest: WHAT! THE FUCK! WERE THE! OPTIONS!?!?!
“Ladies and gentlemen, you’ll never believe what’s going on here. The just substituted and formerly removed Daniel Buballa did just sit down on the pitch and searched for a booger in his nose while Aue was attacking! And in the next attack, he unrolled the red carpet which he hid under his jersey and signalled to the forward of Aue that he can attack without any defence!”

For Fucks Sake! Sorry. Let’s move on.
Or rather not because it was an effective hit. It took rather long until we could get rid of the shock caused by the lead and besides the appealing play in the midfield (both Becker and particularly Benatelli acted as ball distributors and did this to perfection) we do not develop anything at the front at least anything to count. Only in the very last minute before half-time, the rucksack is dropped, Tashchy receives a ball in the box in a fantastic manner and lifts it over goalie Männel – but sadly also next to the goal. Also, Finn Ole Becker cannot score from 12 meters distance.

A mirror of the season so far.
Play-wise, the lads made three steps to the fore compared to the Braunschweig match, result-wise it was the same as always.

Also in the second half, the FCSP needed a little time to start. But eventually, they did. Roughly from the 60th minute onwards, the FCSP elicited half a dozen good chances. The start was marked by Igor Matanovic, who failed to score due to a shining Männel (59th). Next were Tashchy (61st), Buballa (63rd), again Matanovic (69th) and last but not least Kyereh, who shot the ball against the post (73rd). Both chances of Matanovic were by the way elicited by Becker in a beautiful manner.

And when one started to think: “FFS just shoot a fucking goal!”, due to a very open defence and with the third contact of Aue, the ball hit the wrong net – again. However, although the assistance referee was claiming to have witnessed an offside position, the first replay instantly showed that the VAR would overrule this decision. 0-2 or “how to get the minimum out of good performance“.
These three ball contacts in a row were actually the first time that Aue managed to successfully finish two passes of their players since the 65th minute. (Source: Whoscored.com). This says a lot about the dominance of the FCSP but also about their effectivity.

And while even I, Tim, was sitting in front of my computer and already drafting sentences such as “If you lose such matches…” Knoll, Dittgen and Makienok were substituted. And this paid off instantly: Just three minutes after Aue shot their second goal,  Dittgen scored after a corner (actually the first goal after a corner ball during this season while we did not concede any goal after a corner) And all three players who were just substituted were involved in this goal: Knoll centred, Simon dropped and Max pushed the ball over the line.

And shortly before the match was over, it is again a set-piece which delivers the equalizer. First, Lawrence hits the post for the second time for the FCSP but eventually, someone is positioned at the right spot for the second ball: Simon Makienok scores the 2-2. Breathe deeply.

Although they tried a few more things after that, eventually the draw was the final result. And even if the FC St. Pauli is allowed to call themselves the moral winner of this match, eventually it will be Aue who will feel as if they are the true winners of this one point because actually, they didn’t deserve a point at all.
The FC St. Pauli shows really good football against a team which is known to be capable of destroying beautiful football. But Aue did not manage to do it this time. But they manage to score a point at the Millerntor, although the FCSP was highly dominant  (expected Goals 2.9 – 0.6!!!).

Nevertheless, the conclusions from this match are very positive: Leart Paqarada convinced as a left wing-back, the centre with  Zalazar, Becker and Benatelli appears to become the standard formation, Igor Matanovic is one of the biggest forward talents who ever played for the FCSP (if he can manage to play on like this).
And to me personally, it’s even more important to know that Max Dittgen might play the strongest when he is fresh and relaxed substituted in the second half (which was already true against Osnabrück). The same is true for Simon Makienok, who can be a tower in the system “Crowbar”.

“Too less to live, too much to die” is frequently heard. And of course, such a statement is absolute rubbish after the 11th matchday of the season, especially with only three points distance to the non-relegation spot and a match at the ultimate of the table ahead.
Before the match, surely no one would have accepted one point only but in the 78th minute and after the VAR decision, also no one would have dared to hope for this point. And with regards to statistical data only, one has to speak about two lost points, we have to live with it due to the course of the match.

In the twelve matches of the season so far, we have conceded two or more goals per match, that’s simply crazy. Furthermore, we have lost the two other matches by 0-1. Otherwise, we also equalised being two goals behind within the last ten minutes for three times already (Bochum, Darmstadt, Aue). So there’s neither a lack of morale nor of fitness. And we also have chances out of the game (which we somehow don’t turn into goals) but also scored twice today after set-pieces.

So for us, the glass is half full – we only have to secure the points in Würzburg and Düsseldorf now to prevent the Christmas tree from burning down.