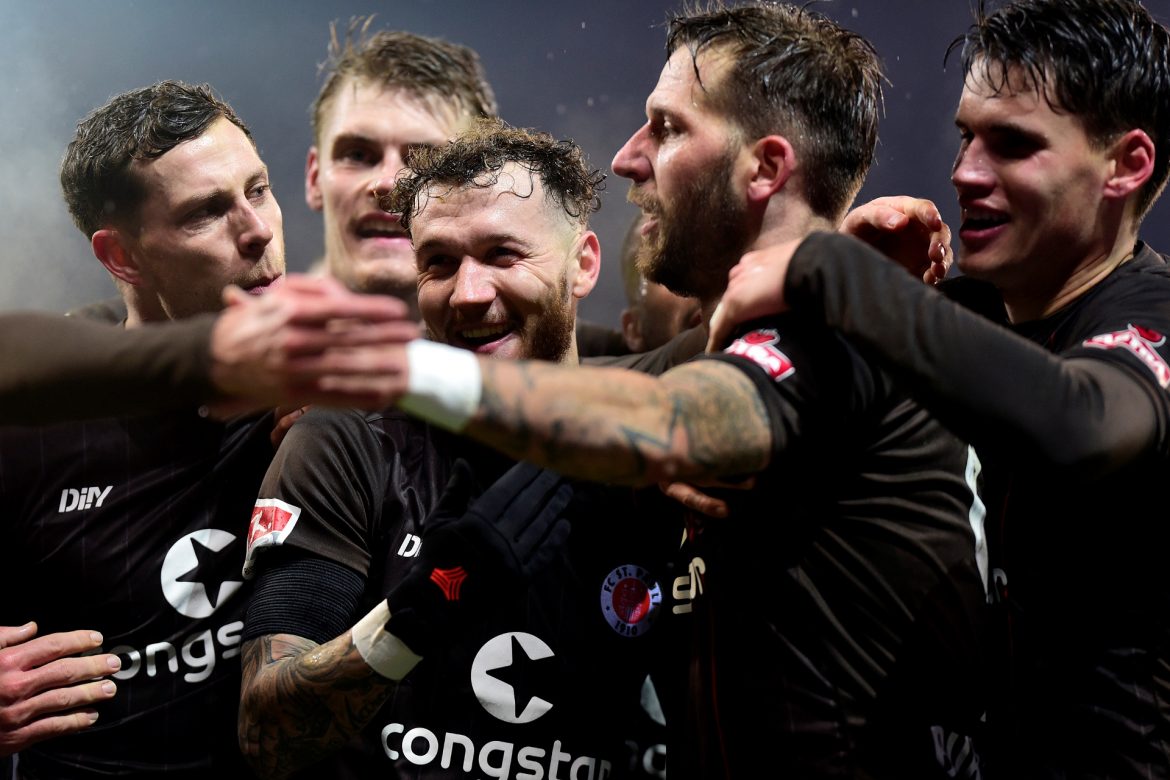 FC St. Pauli is Herbstmeister (top of the league after the first leg of the season). We don’t know that at all, because apart from the very old Oberliga times, we’ve never been. Not in the Regionalliga, not in the 2nd division – okay, and not in the 1st division anyway.
(Cover picture: Peter Böhmer)

“No golden cups, not the tenth championship trophy – only St. Pauli, St. Pauli – that shall be our joy!”
Yes, so says an old club song. And apart from a few Oddset Cup triumphs from regional league times, the championship in that same regional league in 2006/07 and a very long-ago second league championship from the 76/77 season, the trophy cabinet in the club museum is rather stocked with such illustrious items as a “World Cup Winner-Beater” shirt or various derby victories.

So there has never been a Herbstmeisterschaft – except in the distant past. What does that mean for the rest of the season? Let’s take a look, as far as you can tell from the statistics.

38 of 55 Herbstmeister got promoted later

The low blow beforehand: Of the last five Herbstmeister of the 2nd Bundesliga, four were not promoted. Two of them even came from Hamburg…

I am now looking at the figures for the 2nd division since its introduction in 1974/75. 38 of the 55 Herbstmeister in this period were allowed to play the following season in the 1st Bundesliga, while 16 also played in League 2 in the following season. 16, on the other hand, also played in League 2 in the following season. There are 55 Herbstmeister in these 48 years because there was a division into North and South for some years. Namely from their beginning until the 1980/81 season and then again as an exception in the “reunification season” 1991/92.

Wait… 38 + 16 = 54. Why is there one missing? There was a special case in the season after reunification, 1991/92. The 2nd division was exceptionally once again divided into North and South, both divisions played with twelve teams each. After eleven match days, Blau Weiß 90 Berlin was on top in the north, in a very balanced division 14:8 points were enough for this. In the second half of the season, they only managed six points and had to go into the relegation round, which they finished in third last place and should actually have played relegation – but the DFB refused to grant the club a licence and so BW 90 Berlin is the only “Herbstmeister” that still had to be relegated.

In addition to this division into North/South, there is another break in comparability: the introduction of the three-point rule from the 1995/96 season onwards, which is why I will only consider the period from that season onwards for the comparisons regarding points that follow in a moment.

Since the introduction of the three-point rule, 20 of the 26 autumn champions have made it to promotion, i.e. about 77%. Of the six that failed, four teams still fell out of the top 3 (HSV 2x, Aachen and Mainz), two others failed in the relegation. (More on this below.)

FC St. Pauli managed to wrap up this “Herbstmeisterschaft”, i.e. the lead in the table after half of the match days to be completed, already one matchday before the end of the first half of the season. 35 points were enough for this, as Darmstadt 98 lost their home match against Düsseldorf on Friday and thus can no longer catch us on the last matchday. Jahn Regensburg could come within four points of us today, but this would not be enough to overtake us on matchday 17.
On matchday 17, FCSP plays Fortuna Düsseldorf in an evening match next Saturday and could increase the total of its points to 36 or even 38.

But: In the 2011/12 season, we also had 36 points after 17 games, but this was only enough for 4th place behind Düsseldorf, Frankfurt and Fürth. In the end, we had 62 points – and tied for 4th place with Fortuna.

Of the 26 Herbstmeister since the introduction of the three-point rule, 16 have achieved 35 or more points. 13 of these 16 were then also promoted, i.e. approx. 81%.

It was a bit dramatic, after this very strong first half of the season they only got 25 points in the second half. Nevertheless, they were still in 2nd place before the last matchday, but on the 33rd matchday they missed out on an early promotion because of a 1:1 against Fürth.
On matchday 34, the team went to promoted Union Berlin, who had come through the season surprisingly well in 6th place and could play freely. With a two-point lead over Bielefeld and Bochum and a goal difference of twelve goals over VfL, a point would have been enough. In the 2nd half, Christian Fiel scored a penalty kick to give the Köpenicker the lead, Nkufo equalised in the 70th minute – but Union scored two more goals in the 82nd and 90th minute. Bochum (3:1 in Aachen) and Bielefeld (3:1 against Ahlen) took an early lead and won their games, Mainz remained in a thankless 4th place.

Oh, also annoying but…. For a long time, it looked as if our beloved neighbour could quickly repair its relegation and return to where it undoubtedly belongs as a purely global club. But the decisive mistake was made at the Millerntor of all places. On the 25th matchday, they won 4-0 there – the world appeared in the most colourful colours, everything was great, arm in arm they would hop over the finish line rejoicing and cheering with 1. FC Köln, be back in first class the following season and simply be able to hang up a new clock.
But then it struck: the derby curse.
Twelve(!) points were the lead over SC Paderborn after this 25th matchday – but then nothing more succeeded. On the very next matchday, they squandered a 2:0 half-time lead against Darmstadt and lost 2:3, the following matches did not go any better and the defeat in Paderborn on the 33rd matchday sealed their “avoidance of promotion”.

Oh dear, here we go again. Only 22 points in the second half of the season, including a defeat in Würzburg and a 1:0 derby win by FCSP in the 88th minute (Kofi Kyereh) started the head-spinning in Stellingen. Even before the 34th matchday, promotion was mathematically doomed.

Apart from that: The other 13 made it, only Fortuna Düsseldorf (2011/12, 41 points) still needed the play-offs against Hertha BSC.

Let’s look at the points average:
The Herbstmeister had 35.88 points since the introduction of the three-point rule – in the second half of the season they only scored 28.08 points. Carelessness, greater motivation on the part of the opponents against the league leaders – there are probably many reasons for this.
With Freiburg (15/16), Cologne (13/14), Mainz (08/09), Aachen (03/04) and Kaiserslautern (96/97), only five teams have managed to improve their points tally in the second half of the season.

By the way, Alemannia Aachen experienced the worst fall in the table, having played the “weakest” first half of all Herbstmeister in 2003/04 with only 31 points and slipping to 6th place after only 22 points in the second half of the season. However, a win on the last matchday would have meant the promotion, but they lost at relegation candidates Karlsruhe, who still needed this one win to secure their place in the league.

We don’t know anything for sure, of course. And unsurprisingly, no club has been promoted with 35 points. But it feels good at the moment not to have to search the route planner for third league locations with one eye.
We have a very good starting position, which we can – and should – now build on in the remaining two games of the calendar year. And then let’s see what the new year has in store for us.

5 thoughts on “Herbstmeister – so what?”