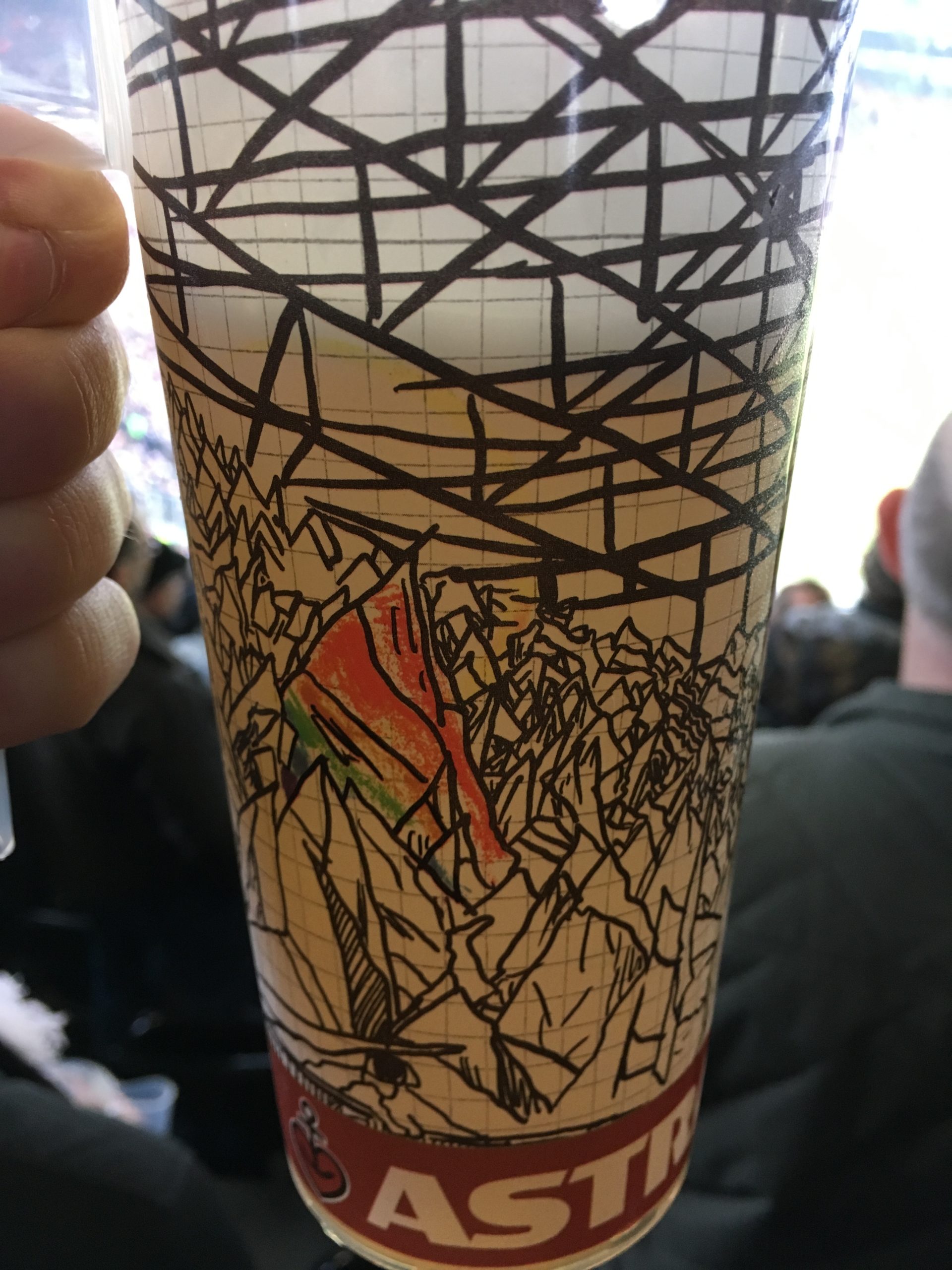 The temperatures were almost in spring areas but winds and rain coming from the side causing the match to look just like another greyish second division kick. Additionally, half of our group was still dealing with a bad red wine hangover kicking our heads from the night before.

In front of the ground and already for the entire morning, a lot of people were wearing red and white colours. A huge fanbase which was clearly raising attention around the ground but – to me – did not cause any harm.

While the south stands were covering the entire stand with a brown crowd flag before the starting whistle (“Diffidati con noi”), the visitors performed a choreography in red and white colours covering their entire standing and seating sections. However, a real atmosphere is neither looming amongst our supporters nor on the visitor stands. But this was perfectly matching the weather with its drizzling rain.

We start with a 4-2-3-1 with Flum (6), Benatelli (8) and Sobota (10) in the centre. A match idea I am agreeing with. Benatelli and Flum are good with the ball and possess the necessary calmness to deal with Stuttgart’s lads. Zander was substituted by Penney who switched positions with Ohlsson. To me, it looked like a clear sign towards Buchtmann and Becker who did show rather unconvincing performances against Fürth.

For the first ten minutes, the VfB kept the centre tight with Gomez, Klement and Förster and caused Penney and Ohlsson to constantly join the centre. This resulted in Gyökeres dropping deep into the own half when defending. However, we might have been a little lucky that Stuttgart did not find a suitable solution to the self-inflicted tightness in the centre before the box so that we survive this phase until the pitch and our team manage to lower the level of the match. This might sound much more negatively than intended because to me this appeared as our match plan. Thereby Benatelli and Flum were the ones who could decisively disturb the opponent’s play and gain balls.

The other decisive aspect was much more relevant: the pitch. Dude! If advertised second hand, “Needs TLC“ would be the right wording if the condition of the goods to be sold is in such a bad state. Sven Mislinat, VfB’s director of sports, pointed at the fact that even “weed was only available on the stands“. I totally agree.

Furthermore, the visitors had to cope with injured players. Gonzalez, a scorer against Heidenheim, was fined to the bench due to a lack of discipline (he did not appear in time for a meeting – was for sure also searching for weed) and team’s captain Kempf had to be substituted after an encounter with Miyaichi’s shoulder. While we were still hoping for a happy ending on the stands, miserably, his injury proved to be a fracture of the jawbone. Get well soon!

At the same time, we had some issues with our build-up play during the first half. And it was fricking easy to decisively disturb it. While Benatelli, Flum and Sobota were constantly moving to free spaces to receive balls from our backline of four, they, however, did not get enough space to turn themselves and thus oftentimes had to pass the ball back. And so their efforts were equalized.

We simply did not manage to create a promising forward play. But if we somehow did, it all started after ball gains from Flum and Benatelli who were either directly sending Ryo or Gyökeres on their journey or aiming to use Henk as a wall player (flat!)

And while Gyökeres and Henk are strikers, Ryo ain’t. He was due to score the 1-0 after a perfect job by Henk (who used his head, I am speechless!) but couldn’t overcome goalie Kobel. This was already in minute 35 during a really not-good-to-watch first half.

However, I also have to admit that I and my supporter group also had a phase of weak performance concerning support from the stands. We didn’t simply show a lack of support, we also somehow stated that a good Bourbon can do the trick when there’s no Single Malt available. Holy moly! The header of Klement against the bar during first half’s added time did also kick our heads and we promised to behave better from now on. And, of course, we said “Thank you!” to Robin Himmelmann.

During half time, we also had to discuss the fact that there are newly designed beer pints available. And finally, their printed-on pictures are more sustainable. The guy next to me said: “I told you so! Simply put something with St. Pauli on it, and the job’s completed.“ Additionally, we took the piss on Hannover’s half-time result. This club with the mess they’re currently making is simply the little hsv. If we could only somehow manage ourselves to play better…

I couldn’t see any tactical changes on our side when the second half started. But why should we either? We forced the third of the league’s table into a surely weak but completely open match.

The 1-0 is a wonderful framing for our strengths on this particular day though. Flum disturbed Stuttgart’s build-up play and gains the ball, Ryo – simply but ingeniuosly – outplayed the opponent and passes at Henk flatly. And we have a striker! And finally, the stands raise from their sleep.

Of course, it wouldn’t have been a good plan to simply block and defend for the remaining 35 minutes. And that didn’t happen either. Stuttgart somehow played forward with more courage now but was also blocking themselves with their way of playing while they’re trying to use their combinations through the centre. And we happily agreed to their offers and played some counter strikes …  without scoring. The strength of the 4-2-3-1 was clearly appearing after taking the lead. Flum and Benatelli gained the balls and initiated the transition play moments through perfectly passing at the offensive players while no real threat happened in front of our own goal. This simply had to lead to another goal for us. While there were no real chances for them either, Stuttgart simply remained a threat due to the pure existence of their offensive department. Furthermore, the fear of the so-called “Mario-Special” was looming. Our hypothesis: In nine out of ten cases, Gomez is scoring after speeding with the ball on his feet from the half-right and scores by shooting flatly next to the back post.

And I will simply never understand the substitution of Buchtmann for Flum. Why the own centre is changed into a more offensive one while with Knoll the perfect substitute is still on the bench will forever remain a big mystery. From my point of view, the match turned into a more equal one after that. Because after all the not-so-well-played transition moments now we had five players in the front.

Yepp. And that’s how we conceded the equalizer. A counter-strike (for Stuttgart) and four against four. Kiss my ass and fuck off! How stupid was that?

In the meanwhile started drizzling rain, we panicky tried to find the momentum again and even had some more promising situations to take the lead again. But we didn’t manage to.

After the match, we shortly headed to the club’s pub before we joined the protest march against the new police law in Hamburg. It’s always good to see how well the approach to start protests directly after a match works out as there were probably more participants than usual. The protest happened without any disturbance. How bad the new police law and the new law for the protection of the constitution will be for all of us can be read here if you’re in a hurry and cannot read the law itself.

During the protest, the person next to me told me that there’s a huge chance that some of the away fans will also join the protest march. They also had a protest sign against the new police law with them. But after an even amongst the supporters of Stuttgart critically seen sign of “stingy Swabians” as a rotten reply to our criticism against the ticket prices in Stuttgart for the first leg and another unusual German flag in their stands, it was rather good that they didn’t join the protest eventually. Sexist and stupid fuckshit is the right wording for things like that.

What a pity that we didn’t manage to turn the rainy Saturday into a bright one with three points.

3 thoughts on “Weed – at least on the stands”