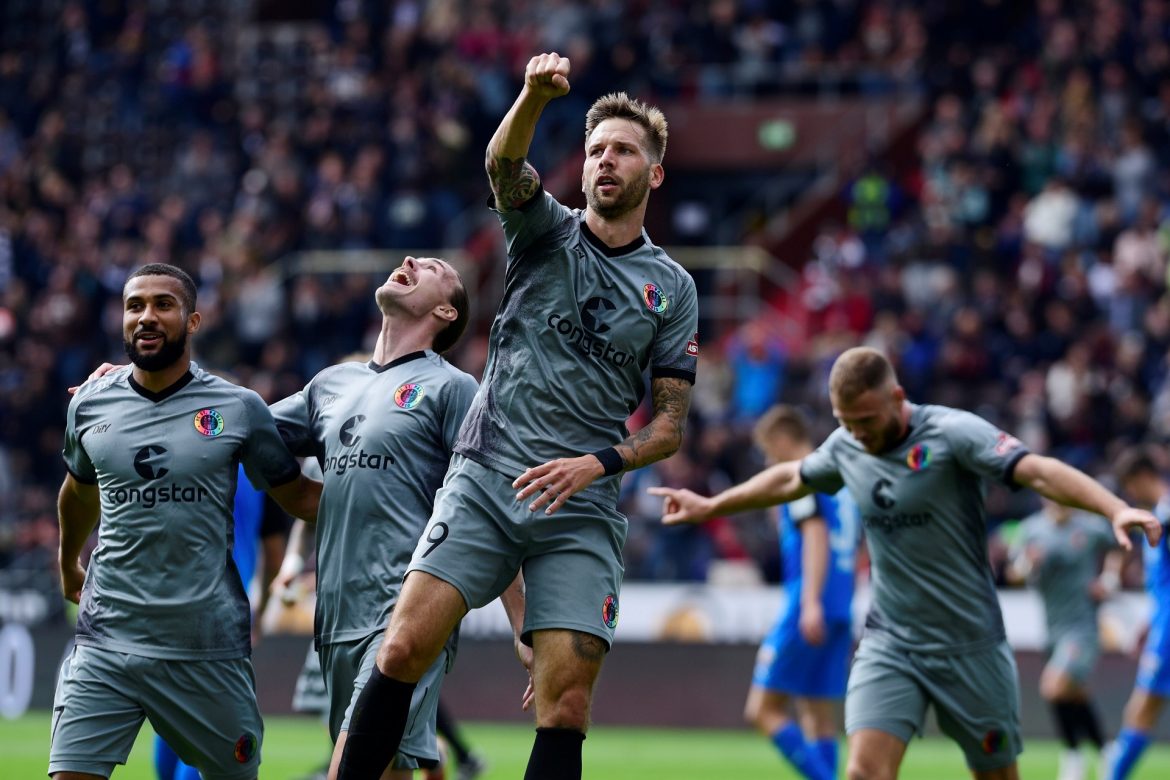 It wasn’t the Millerntor experience we love so much, for various reasons. But it was at least a step backwards. Hopefully, more steps will follow quickly (and others will gladly stay away).
(Cover picture: Peter Böhmer)

If you’re here to read the tactical analysis of this thoroughly commanding and convincing home victory, you’re a bit early. Tim will deliver it later, but probably early on Monday. So for now, this is “just” about the other stuff.

(And if you’re wondering why the stadium was so full, here’s how it fits in with the 2G theme).

WE LOVE YOU AND WHERE YOU PLAY WE FOLLOW! 🤎🤍#fcsp | #fcspfci pic.twitter.com/5mcExnRulg

I admit that I had forgotten about the closure of the access road from Budapester Straße to the Gegengerade and had overlooked the side sentence in the e-mail from the ticket centre – and I was probably not alone. But it didn’t matter, because there was enough waiting time anyway.
I was at the entrance for the middle blocks of the Gegengerade at around 12.10 pm and three “U-queues” had already formed. On the one hand, this meant a frighteningly long wait, but on the other hand, I thought it was very well organised and, above all, very disciplined. Since the queues for the various entrances to the back straight would eventually overlap, there was also someone at the end of our queue with a large sign held aloft indicating the end of the queue. So, at least in my area, it all worked out well and by about 13.05h we were inside. The certificate of the Corona warning app was also no longer checked manually, but scanned, so that a) felt faster than at the previous games and b) should also be forgery-proof.
(Disclaimer: How this is supposed to work when it’s DOM again, I can’t even begin to imagine).
Whether and how the queues were worked through to the kick-off is beyond me, but the whistle blew on time.

In the stadium, the standing-room area of the Gegengerade was more crowded than at previous games, the seating area was almost sold out, and people were standing again in Block 1. (I hesitated for a moment whether I should write “Block 1 was again the singing area”, but I was forbidden to do so by those present there because there was simply too little singing. More on that in a moment).
In the South, the standing area was full (although certainly still with the handbrake on and not the 100% capacity of before the pandemic) and in the seating area the same applied as for the GG; with the exception of the business seats, which were about half full.
In the main stand, I would assume about 2/3 full seats, also with significantly more gaps in the business seat area.
The North was empty, as announced, with the exception of the sparsely filled away end.

“USP sings itself warm – goose bumps!” – this WhatsApp reached me well before kick-off from a person who is otherwise not necessarily Ultra-affine. And this probably also reflected the feeling of most people in the stadium, because the largely full South was at least a bit like a return to normality, which was then also clearly reflected in the support.

During the “Aux Armes” the rather unpleasant moment when “The whole stadium!” was shouted in advance, although the North was empty. It would probably have been more considerate/respectful towards the North to only call out the Gegengerade and the main stand individually. But maybe there were talks with the North Support beforehand and I’m thinking more (unnecessary) thoughts than the people directly involved.

The game was then strangely clear and confident. As against Regensburg, you always had the feeling that only one team would leave the pitch with three points today – so when I wrote above that this was not the usual Millerntor experience for many reasons, then I explicitly include this sporting course of events. We are used to great drama and heart-stopping finales, such clear victories with a two-three goal difference are hardly known. And when, after conceding a goal, you almost wanted to breathe a sigh of relief that this is still the old chaotic team that can’t bring a lead to the finish line without some remaining trepidation, they simply score the 4:1 in return.
Before this is misunderstood: I love close victories, preferably undeserved and in injury time through an unjustified penalty in the overtime – but I’m also getting older and I will therefore not complain about nerve-saving victories with a three-goal difference, of course.

At some point, however, this superiority put a little bit of pressure on the mood. Sounds stupid? It is. But obviously we always need that drama – or at least an away end to rub up against. Neither was given, so the Gegengerade sat back relaxed, enjoyed the regained acoustic irradiation from the left and the performance on the pitch, which then also resulted in goals at some point. And then you also clap along and rejoice.

I don’t want to complain about it, I didn’t feel much different today – but by Dresden at the latest, there should be a bit more emotion among everyone involved.
And maybe the North will be (proportionally) full again.

Addendum: See comment, I had forgotten that before: On the lap of honour, the team marched straight from the main straight to the Gegengerade – but was kindly told by the back straight to stop by the Nordkurve. There was indeed a lonely and abandoned fan who was all the more pleased to be able to do the wave with the team.

In this sense: Just be happy.
Third place in the table, quite a respectable goal difference, four wins in four home games – we’re on our way. Of course, it would be even nicer if we could take a look at the away table next week in Karlsruhe and leave the ugly 17th place behind us. Upwards, mind you, before that is misunderstood.
And against Dresden, there might be even more people than the 13,917 officially in the stadium today.

Have a nice rest of the Sunday!