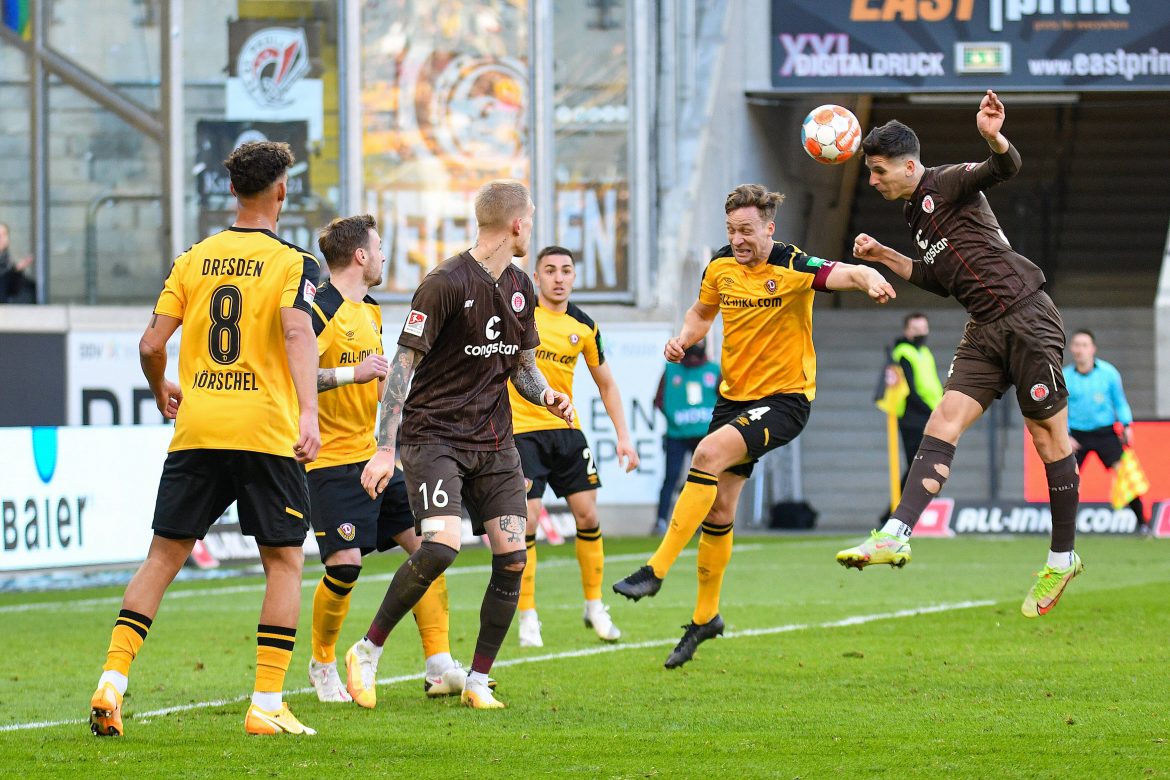 FC St. Pauli earns a point in the away match in Dresden. After a first half in which the passing game was particularly imprecise, the team improved enormously in the second half. This was due to a change in personnel and improved positioning. However, the goals were mostly inaccurate, so the team had to settle for a point.
(Cover picture: Bert Harzer/Eibner-Pressefoto/via Imago Images/via OneFootball)

FC St. Pauli made one change compared to the home win against Karlsruher SC: Adam Dźwigała replaced Luca Zander on the right side of the defence. He did a very good job.

Dynamo Dresden made two changes: Regular goalkeeper Kevin Broll returned to goal after breaking his hand, and Yannick Stark did the same on the field after a yellow ban (he replaced Sebastian Mai, who had been strong recently but was now injured).

A first half followed which, from FC St. Pauli’s point of view, had to be described as difficult. Dynamo Dresden pressed mostly quite high with their 4-3-3 but lacked pressure on the opposing full-backs already in the first 45 minutes. As we all know, that is not such a good idea against FCSP. But quite different from the last time against KSC, FCSP could not really use this advantage in the build-up of the game for themselves. After all, at some point the pressure on the full-backs became high and Paqarada and Dźwigała were offered very few link-up actions, as few vertical passing options were available. FCSP was unable to exert any offensive pressure despite a high possession rate.

In fact, the opposite was the case: little by little, Dresden became enormously dangerous on the flanks because FCSP once again had problems with their defence at the back. However, I would not describe this as a problem of the team’s inadequate positioning. Rather, the own passing game was weak. It was relatively easy for FCSP to play through the front three. In the second period, FCSP mostly had a superior number, with the two full-backs as well as Buchtmann, Hartel and Kyereh (who liked to drop into this line). Dresden’s three-man midfield was actually overwhelmed by this. Coach Capretti’s team was mostly very slow to switch from the 4-3-3 to their 4-5-1, which they played in deep pressing. They then created pressure on the FCSP wing-backs not so much through the offensive wingers, but through their wing-backs.

FC St. Pauli’s problem was not that they had no advantages in the build-up. But the fact that five FCSP players were on the same line meant that there was a lack of depth in the game. But much worse: their own passing game was insufficient. There were simply brutal bad passes. Marcel Hartel, actually a master in the passing game, is a good example. But before Hartel is blamed for the sluggish first 45 minutes: Christopher Buchtmann was only not conspicuous because he only played a total of nine passes. Hartel played over 50, five times as many (with more playing time). Paqarada also played five times as many, but per half. Already in the game against Karlsruhe, Buchtmann was conspicuous less for his ball actions than for his toughness (he also played the fewest passes of all FCSP players on the pitch (including Vasilj)).

The many misplaced passes and sub-optimal positioning often led to dangerous situations for Dresden. When the ball was won, centre-forward Daferner moved to the flank and the two attacking wingers were happy to move into the centre. The space on the flank was there because both FCSP wing-backs had moved forward. However, this advancing was not the problem per se, but it was the many ball losses due to the weak passing game that led to it. In many moments, FCSP was even able to defend quite well, but with the high number of ball losses, not everything could be prevented.

Dynamo Dresden had many chances in the first half, some of them beautifully played out. But what was definitely preventable, and what made me swear terribly, was the goal against. Because Leart Paqarada and Guido Burgstaller watched relaxed as the standard flew over their heads. They then simply stopped. The fact that the ball could be played back into the centre from the second post seemed to have slipped their minds. Daferner didn’t stop, but ran in and stood completely blank because of the spectators on the FCSP side. Come on lads, that was really bad defending.

What could the team have done to pull themselves out of this mess? Basically, the build-up play offered some options, although it was solved a little better tactically in the second half. But what was not used at all when space was tight: the long ball to Simon Makienok. I mean, the guy is also on the pitch because FC St. Pauli has this extra option in the build-up with him. That poses massive problems for the opponent. But if it’s not used or only insufficiently used, then an opponent can defend more courageously elsewhere on the pitch.
When the long balls did come, however, their positioning was also a problem, as Kyereh was usually dancing around somewhere deep in midfield and there was simply too much yellow and black around Makienok. Timo Schultz had already stressed after the KSC game that he would like his team to play this exit strategy even more often. Against Dresden, he must have therefore almost gone mad.

It is so important to use this option properly at least once in a while. It’s like in American football, where you always have to decide between the pass and the run game. If you only play one, the opposing defence can adjust to it and become a little more courageous. If a team always switches diligently between the passing and running game, the opponent must always be prepared for all eventualities and cannot concentrate on one type of defensive work. Well-dosed long balls to Makienok would have helped a lot to make Dresden’s defensive work more cautious. Instead, they pressed more and more courageously in the first half.

That all sounds very negative, and in a way, it is meant to be. But it was clear in the first half that FCSP had the better game, despite the high number of bad passes. The team then equalised shortly before the break via a standard (and goalkeeper error). At that point, it was quite fortunate.
In the first half, FC St. Pauli won only 43% of its duels. In the second half, it was 53%. In addition, the team played 34 progressive passes (= passes that come significantly closer to the opponent’s goal) with a success rate of 78% before the change of ends. In the second 45 minutes, there were 58 of them (89% successful). The xG values from half-time one (0.74 – 2.04 from FCSP’s point of view) were clearly turned around (2.4 – 0.29). FC St. Pauli became very dominant in the second half and deserved the winning goal. But what exactly changed in the game?

Leart and Adam with even more space and time

Although Leart Paqarada and Adam Dźwigała already had rather a lot of space in the first half, Dresden’s pressing noose tightened at some point and the passing lanes closed. But Paqarada’s incredible 70 ball actions in the second 45 minutes showed that something had changed.
FC St. Pauli’s build-up play was now grasping better as the team now managed to offer more space for the full-backs and more vertical passing options. Have a look at the graphic:

In the first half, FC St. Pauli actually had an upper hand in midfield as soon as Paqarada and Dźwigała moved level with their midfield colleagues. But that was also one of the problems: With all players on one line, there were few vertical passing options. And since Kyereh mostly dropped into central midfield, the long ball to Makienok was not an option either, as the positioning was not suitable for this style of play.
In addition, the play on the midfield line became too tight, as Marcel Hartel also liked to run around on the left (Kyereh and Buchtmann were central). So the space was a bit tight for Paqarada. The space became even more limited when Schröter from the offensive three-man line and Akoto from the defensive four-man line ran into him.
Two changes in positioning and one change in Dresden’s play then led to a complete overturn of the game in the second half (I’ll use the example of the left-wing here):

That was a pretty good reaction of FC St. Pauli to the pressing of Dynamo Dresden. In the first 20 minutes of the second half, Dynamo could no longer generate any grip at all on the FCSP game. During this phase, FCSP had the lead on their feet several times, although the passing game was still error-prone (but better than in the first 45 minutes). However, precision was not only lacking in the passing game, but also in goal scoring. The team hit the crossbar or post four times in the 2nd half, Irvine and Burgstaller had other great chances.

SGD coach Guerino Capretti reacted rather late to the lack of access in the second half. For 20 minutes, he just watched the action on the pitch. It was clear shortly after the restart that the change in FC St. Pauli’s positioning had brutally exposed the weaknesses in Dresden’s 4-3-3. In the 65th minute, he then substituted Mörschel for Batista Meier and changed his formation to a 5-3-2, with Schröter as a right wing-back. With this formation, the allocation and also the access to the opposing full-backs was much clearer again. As a result, the wind was taken out of the sails of FC St. Pauli’s enormously pressured attacking play.

But FCSP still had the better game and could have achieved much more. One reason for this was certainly that two players performed well again in their best positions: Eric Smith returned to the six and his passing security in the six-man area, as well as his positional play in switching moments, are simply really great. If only he could show that all the time. Jackson Irvine also showed that he is a bit better at the half position, as he can always make dangerous inroads into the opponent’s penalty area from there.
But also in the second half, the precision in passing remained relatively weak in the final third. The precision in the goal finishes did not improve either. In the end, it feels like two points lost.

So we all have to live with this point. Based on a weak first half, it’s certainly a bit lucky. Based on the second half, in which FC St. Pauli was superior, it could have been more than a draw.
After all, Darmstadt did not fare any better on Friday (only a draw against Sandhausen) and Werder even lost their game (1:2 against Heidenheim, who were even decimated before the game against FCSP (red for Busch)). It remains the case that no team can pull away in the fight for promotion and everything already boils down to a real heartbeat finale developing. And FC St. Pauli is still right in the middle of it. Cool! 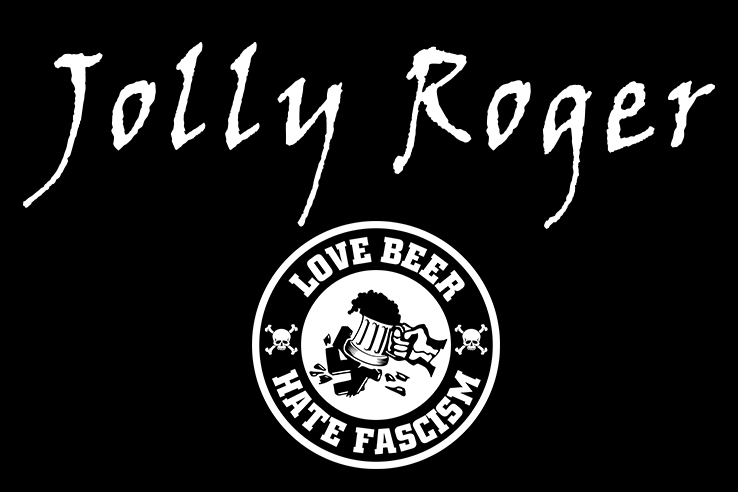