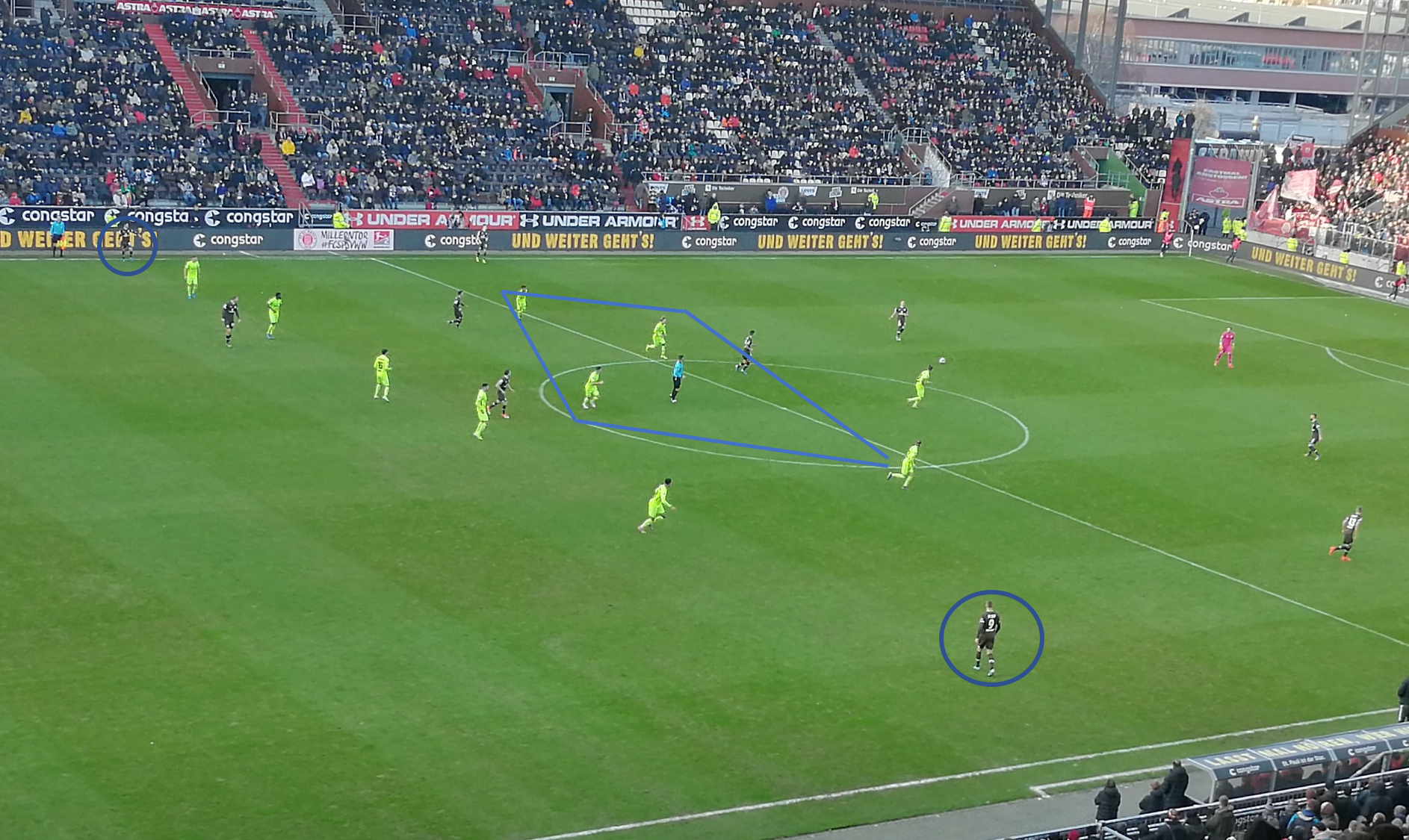 Let’s start with the important: We finally managed to score three points. All three goals resulted straight from the play, we conceded no goal after a set-piece, two goals were scored during the last 15 minutes (for the first time of the season) and despite all injuries, we were able to start with eleven players on the pitch (even though Ohlsson had to be substituted due to an injury later). What can you even think to ask for more? Well, in the long run, I would like to ask for a little bit more or at least a little less of suffering.  Because this match was no masterpiece at all. But for now, I am fine with the three points. What more could we expect from a duel of the 15th against the 17th? There was a lot to lose.
And as we already set the working title for this article during the preparation before the match, which we do not have to change now and which was already done similarly and working brilliantly for the derby, we should keep it like this from now on. Honestly: If this the way to solve all our problems, we should also start to do it like this for every training session to prevent our players from further injuries and of course, for every single match of Rostock, hsv, etc…

A brief analysis.
The FCSP started against Wehen, which looked like our security staff in their eye-challenging yellow shirts, with Knoll as a central defender and Buchtmann (really!) as a substitute for Lawrence and Mats Möller Daehli respectively. The pair of pliers with Miyaichi and Gyökeres as wingers was also continuing. And in the same manner, the offensive approach with two players on the eight was kept consistently.
The SV Wehen-Wiesbaden positioned themselves in a 5-4-1 formation as a defensive order and aimed to move compactly thereby. But this worked only partly. The FCSP dominated the match predominantly in the first half but without creating the very big pressure. The reason for that? The 5-4-1 from Wiesbaden was formed in a clean way though, but, however, compared to a normal deep 5-4-1 they allowed spaced between their lines of defending which had the size of the Atacama desert. Thus, the FCSP players on the eight were able to emerge between the defending lines every now and then and receive balls there. This worked quite well. It could have worked even better but with the opponent team positioned in a deep 5-4-1, you have to feel satisfied with not that much space (even though there was actually some space).

The FCSP acted with a very good wide positioning offensively. With that, I mean the clear order of the midfielders on the flanks but also the fullbacks at their respective flank. This caused a very nice challenging of both defending lines of our opponent. And by doing this, we also created spaces in the centre which could be utilized by the FCSP players on the eight (depending who rotated in the respective moment this were either Sobota, Buchtmann or Becker accordingly).

But first and foremost the strict spatial orientation of Wiesbaden resulted in a lot of ball possession for the FCSP. In the second half, Wiesbaden did no longer strictly stick to their spatial orientation in the centre and played with some more man-to-man marking or a diamond formation (see next picture). I am not entirely sure which of these options they actually played. Anyway, it resulted in a much better restriction of the spaces of our players on the eight than when Wiesbaden played with a defending line. And it also led to a much less dominating FCSP during the second half compared to the first 45 minutes.

Offensively, Wiesbaden barely offered anything. And their method thereby was remarkably simple. With exception of their defensive midfielder and the three central defenders, all players oriented themselves to the very front line. Then, long balls were shot and they tried to initiate something from these attempts. But it didn’t work at all. Because of the man-to-man marking of our outer midfielders, we formed a defensive line of six in the back and as most of the players were lined-up in a chain, there were barely any promising attempts for second balls because it resulted in a bad positioning vertically.

And that’s it tactic-wise. We win the match first and foremost because we did put more efforts into duels situations, especially during the first half. And despite all dominance, it was a difficult match. The importance of the match was clearly looming in the minds of most of our players. And generally, our play is simply lacking precision at the moment. It’s dominated by too many bad passes and wrong paths taken. And I have to admit honestly that it was a difficult-to-watch match (which might also be related to a long night out before the match on my side).

All in all, we have deservedly taken the lead. But not because we elicited a bunch of sure chances. But simply, because, compared to the SVWW, we did invest something at all into the match. With regard to our opponents, I rather got the impression that they actually had no idea how to score a goal at all. And this is where Marvin Knoll came in handy. A clear case of “brain fart”. Utter shit but it happens. However, in our current situation, this was the worst-case scenario and we didn’t manage to entirely recover from this mistake. The 2-1 rather came out of nothing and wasn’t the logical consequence of all the sure chances before. However, it doesn’t matter what caused the goal and how we eventually won the match. First and foremost we needed the three points. And against a deep positioned opponent who doesn’t show any interest to score a goal, that’s incredibly difficult. Especially, in times like these. And this is why we cannot overrate this win. A brief gaze into the league’s table and a short calculation what would have happened in case of another defeat is already enough. Ewald, the old and wise Football-Philosopher, once simply dropped a statement in the manner of Herberger: “Victories are irreplaceable”. And there’s barely any other situation where this statement fits better than now. To win, no matter how, was simply the most important. And the rest will come to terms accordingly.
So, it doesn’t matter any further, we have these bloody three points. And anything else isn’t that important at the moment. So we finish the first leg of the season with 18 points. Who would have thought something like this after the home-win against Sandhausen? Me, for sure, not. Not at all.

And frankly spoken, I am a bit ashamed. Didn’t I write after the horrific performance against Hannover that Gyökeres is lacking the decisive 5km/h to score from the flank? Well, I am still believing that an offensive player on the flank needs more speed but two goals and one assist are a clear statement. Mea culpa, Viktor!
Maybe, I should diss a few more players so that they play their arse off at the next match? Nope, for now, I stick to some predicting working titles for blog posts.