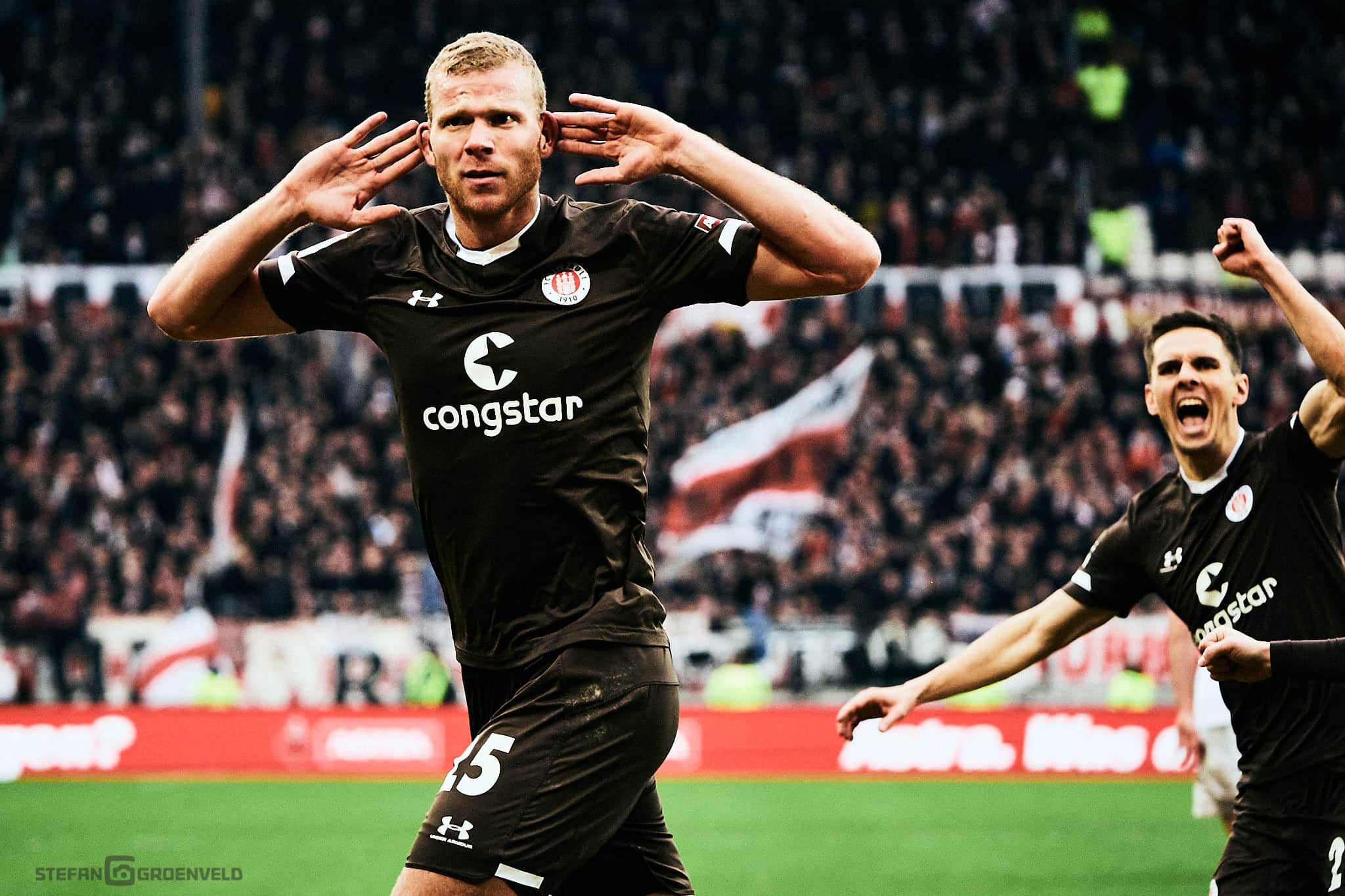 „Players come, managers go, only St.Pauli will remain!“
This classical lyrics-line from the „No one likes us!“-fan-chant is a pretty good match.

During the last two years, Henk Veerman made 39 league match appearances (17 goals, seven assists – what an awesome ratio!!) for the professional squad of the FC St. Pauli (he also played twice for the U23) and with his way of playing and his particular running style, he quickly made it straight into our hearts.
First and foremost, we will never forget his goal marking the 1-0 lead on February 22nd 2020 in the stadium of the many names, when he managed to get rid of his fellow countryman Rick van Drongelen over a running path of several meters just as if he was a nasty fly which then led to an explosion of emotions in the visitor’s stands. Well, it’s easy as pie to make an entry into the brown-white books of history.

His cruciate ligament puncture in the winter of 2018 and the dislocated shoulder during this spring hindered him to make even more appearances. The lecture from Jos Luhukay when still on the pitch captured by TV-cameras after Henk left a penalty to be shot by Diamantakos was another hint to the public that the relationship of these two guys wasn’t amongst the best ones and maybe also the last drop that was needed to let the barrel named “no chance for a better future of the relationship of the team and Luhukay” overflow.
Of course, we were full of hope that with the new coach Timo Schultz these things became an item of the past and there’s a huge likelihood that this was indeed the case. However, a transfer in professional football is some kind of daily business, especially for a player in his best years (29) and whose contract will only run for another year.

He will now transfer back to the Eredivisie to SC Heerenveen, for which he already tightened his shoelaces for 3.5 years before he transferred to us. Heerenveen did end the last season as a midtable club of the Dutch first division.

The transfer fees have not been disclosed but if the circulated sums are right (in 2018 the FC St. Pauli signed him for 500.000€ and now sold him for 1.5 to 2 million €), the club made a very reasonable decision, especially during these unprecedented times in which the survival of some clubs missing out on earnings from the stadiums is hanging on a thread.
Thus, the SC Heerenveen is basically paying 1 – 1,5 million€  of “stupidity fees“. Because they sold a striker in the best footballer’s age in the last year of his contract for only a fraction of the money which they are now paying for the exact same player who is again in the last year of his consecutive contract but who has definitely slightly crossed his peak now.

We should keep in mind that the contract of Henk Veerman was only valid for another season. To sell him now is thus absolutely comprehensible from an economic perspective. And who knows what has been already negotiated in the background. It can be assumed that the responsible persons would not have only noticed in autumn or winter that his contract expires. Rather, it can be assumed that negotiations had been going on in the background for some time.
And the last word during such negotiations will always be spoken by the player himself. If a player wants to leave the FCSP to return to his home country, such a player can hardly be convinced to stay (additionally, there’s always the chance that professional footballers are accompanied by a family which isn’t always willing to move to every single location).

This matches well with his statement from the official press release:
„It’s the best decision for me and my family. I am really proud to have played for this fantastic club and these brilliant fans. I will always remember the games at the Millerntor and especially the one at HSV when I gave us the lead in a 2-0 away win.”

But it’s also clear: The starting line-up now has a vacant position which needs to be filled. After all hopes about another loan of Leo Østigård had to be buried yesterday, now another loan of e.g. Viktor Gyökeres could become more concrete.
And it’s also questionable whether the wall-player Henk Veerman would have been a good fit for the concept of quick play of the new coaches squad. Because it’s pretty obvious that the basic demand of Timo Schultz with regards to offensive players contains a certain speed. And sadly, the diesel engine Henk Veerman did not possess this wished-for speed. But for a playing system which partly contains elements of offensive pressing a certain speed and acceleration is needed respectively. On the other side, a coach always has to match his idea of play against the available players. And when you have a player such as Henk Veerman in your squad as a second division participant, you should make use of him.

Nevertheless: It’s a pity, Henk! We always loved to see you playing in brown and white.
We wish you all the best in the Netherlands and for your future career!!

12 thoughts on “Henk Veerman transfers back to SC Heerenveen.”