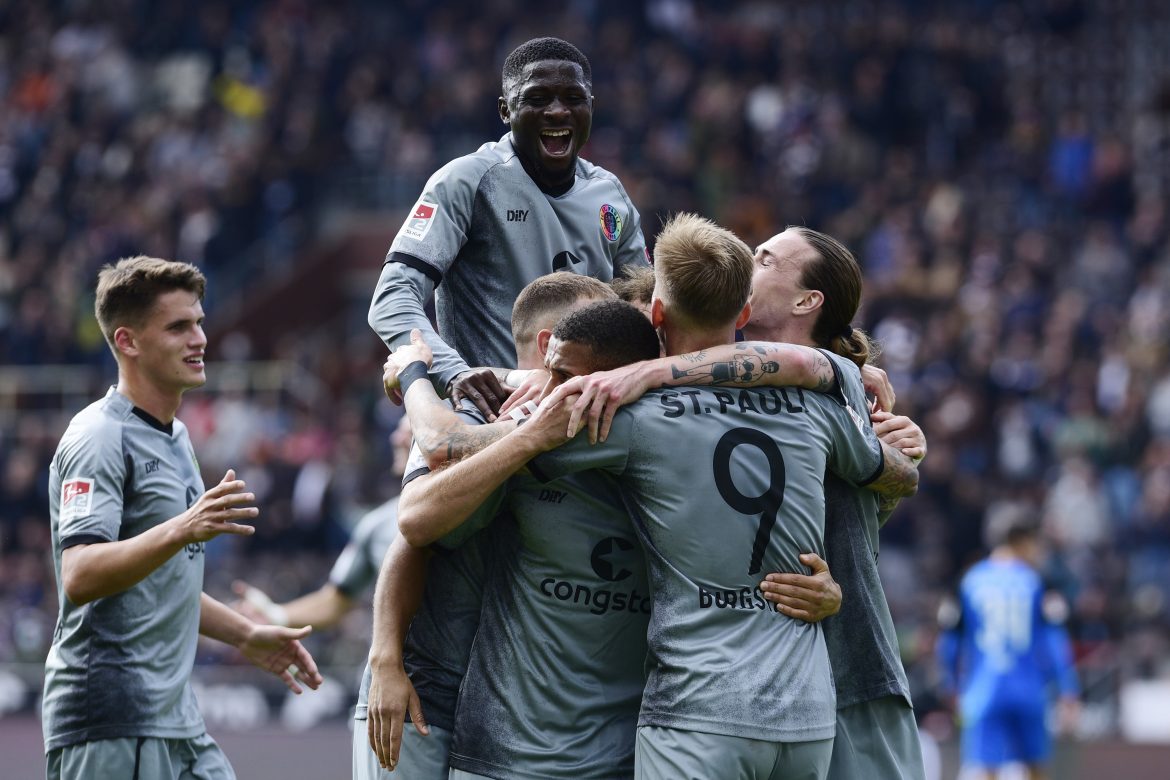 FC St. Pauli once again showed their offensive strength at home at the Millerntor and deservedly won 4-1 against a clearly overwhelmed FC Ingolstadt. The decisive factors in this match were the behaviour in the transition moments and the almost dreamlike combinations in midfield. With the fourth home win in the fourth game, FC St. Pauli is now deservedly in the relegation places after seven games.
(Cover picture: Peter Böhmer)

You can read about what happened around the stadium and in the stands yesterday here from Maik, so let’s look at the pitch now.

…was quite surprising for me. Maximilian Dittgen replaced Simon Makienok in the centre of the attack, which is understandable for reasons of pace (even though I expected Daniel-Kofi Kyereh there for the same reasons). In addition, Finn Ole Becker had to miss out due to injury, which led to an impressive starting debut for Jackson Irvine. In central defence, captain Philipp Ziereis returned. I had suspected James Lawrence there, as I’m sure many others did. Timo Schultz had said at the pre-match PK that Jakov Medić felt more comfortable as left centre-back. That may have been the deciding factor. In addition, FC St. Pauli had to do without Jannes WIeckhoff at short notice.

On the side of FC Ingolstadt there were also some changes compared to the previous week: As already suspected in the pre-match report, Tobias Schröck started in central defence instead of Nico Antonitsch. On the left side of the defence, Gladbach loanee Andreas Poulsen replaced Dominik Franke. Upfront, Patrick Schmidt came in for Fatih Kaya.

An orderly build-up of play?

Well, I had expected something different: FC Ingolstadt did not expect FC St. Pauli to play deep but pressed consistently high. FC St. Pauli did the same. Thus, a game developed in which, in the beginning, transition moment followed transition moment. Already in this initial phase, FCSP had advantages. However, these advantages only became really clear when FC St. Pauli managed to overplay FC Ingolstadt’s first pressing line in rows from around minute 15 onwards. The training with a focus on interface passes during the week seemed to bear fruit.

In all the chaos, however, another detail became clear once again, which must not be forgotten despite all the tactics and analytical subtleties: FC St. Pauli’s squad has an incredibly high individual quality. Especially offensively, it is probably one of the highest in the entire division.
Accordingly, yesterday we were able to marvel at how the team once again played itself into a frenzy. FC Ingolstadt was simply overwhelmed. But so were Holstein Kiel, HSV and Jahn Regenburg at the Millerntor.

So it was then a matter of time before FC St. Pauli would take the lead after fabulous minutes of beautiful combination football. After two already very interesting variations that almost led to success, it was a quasi-classic “cross, header, goal” number that brought the lead: Leart Paqarada brought in the corner and Luca Zander showed that he can not only run up and down the flank with a lot of speed, but also deserves the nickname “Air”. What a jump, what a beam of a header – 1-0!

As a result, you could also see a little more of how FC St. Pauli envisioned an orderly build-up of play when in possession: Marcel Hartel’s movements were crucial while the defence had the ball. He either moved all the way to the left flank to allow a vertical pass extension for Paqarada (and opened up a passing path to Kyereh) or, and this movement caused Ingolstadt far more problems, he broke up his left half position and moved into the right half-space. Ingolstadt really had no answer to this movement, so that FCSP, thanks to Hartel, completely opened up the right half-space and Hartel, together with Zander and Irvine, was able to play out a superior number here.

However, the majority of the game remained chaotic due to the many ball losses. All the more important is that FC St. Pauli had someone at the six-position who could defuse many situations for Ingolstadt early on in the build-up. Afeez Aremu intercepted a whopping eleven passes yesterday (the division’s top average is twelve) and won every one of his defensive duels. He still has room for improvement in the forward passing game, but his role in the defence is much more important. As was the case against Hannover, Aremu was rarely if ever involved in the build-up to the game. While his teammates were sometimes completely free in the offensive third, he was discreetly restrained in his forays and thus secured the defence at the back.

Well, of course, Dittgen didn’t decide the game on his own. But I would describe his positioning as decisive for the game. His style of play differs considerably from Simon Makienok’s and yesterday he was not only able to create an enormous scoring threat with his speed. Dittgen often moved to the flank, dropped a little deeper and was often involved in the combinations. This did FC St. Pauli’s game a lot of good, especially as the Ingolstadt defence could not keep up with the high tempo and the frequent rotations of FC St. Pauli in the offensive simply could not keep up.

…we saw all four of these body parts in action (some of them several times) against Ingolstadt. It may be a bit striking, but they are emblematic of a new playing culture at FC St. Pauli. If you want to watch just one scene from the game, it’s Dittgen’s header chance in the 19th minute. That is soo fantastic, but also so easily played out. Insane! Where for years there was a drought, now the joy of playing and creativity is exploding, sometimes immeasurably. For years, there were only individual players who provided the space-opening passes and dribblings. For years, there were no teammates for cultivated short passing. For years, the crosses were either too high, too short, too weak in the penalty area or even behind the goal. Now, however, FC St. Pauli has an offensive department that exudes the pure joy of play. I repeat myself (and I do so gladly): Watching this team play football is incredibly fun.

As if that wasn’t enough, we were able to experience a wonderful comeback yesterday: Christopher Buchtmann had to fight his way back from injury for a really long time. After many years in which a fit Buchtmann always meant a playing Buchtmann, times have changed. FC St. Pauli has many good players in the squad in positions where Buchtmann feels comfortable. Therefore, Buchtmann is currently always part of the squad, but not the starting eleven. After his performance in Hannover after his substitution, he was already promising, but Christopher Buchtmann showed against Ingolstadt that he can undoubtedly keep up with his colleagues in terms of combination football. But what distinguishes him and also sets him apart from his colleagues in midfield: Christopher Buchtmann is enormously goal-threatening. He scored 16 goals in three years at FC St. Pauli between 2016 and 2019. Of course, he didn’t play in every game during that time. Should Buchtmann finally stay fit for a longer period of time, his goal-scoring prowess will help FC St. Pauli enormously.

I could go through all the other players one by one and praise them. Jackson Irvine, for example, who played a completely different half position to Becker, but also played really well, was enormously important defensively and helped develop a lot going forward. And the fact that he walked past the Jolly after the game, relaxed and with his rucksack and a big grin on his face, says it all.
I must also mention Jakov Medić, whom I have criticised, based on data, that he still has room for improvement in his forward passing. Against Ingolstadt, exactly 16 of his 16 forward passes found their way to his teammate.

Before the match, FC Ingolstadt and FC St. Pauli were in a relegation place in one statistic: both teams had the worst odds on their shots on goal in terms of firing them on target. FC Ingolstadt confirmed this yesterday in a frighteningly impressive manner, sometimes failing to put the ball on target from excellent finishing positions (1 out of 9 = 12.5%). FC St. Pauli, on the other hand, put 11 of their 19 shots on goal, i.e. almost 60% – a really good value.

Ingolstadt’s weak quota shows it and soberly viewed the game also showed it: At the latest after the 2-0 by Dittgen, there were already some situations against FCSP that would have been better used by a strong opponent. The processes in the back defence are not really solid and were not called upon yesterday.

That can be a topic for the next training week. And isn’t it also kind of nice to note a few things that need improvement in a 4-1 result? The reward for another strong performance in a home match is third place in the table. This is highly deserved in view of the performances shown. 13 points from seven games is a really good average. One that will get you promoted at the end of the season. But only if the current home strength can also be transferred to the away games. Next Saturday in Karlsruhe is a good start.