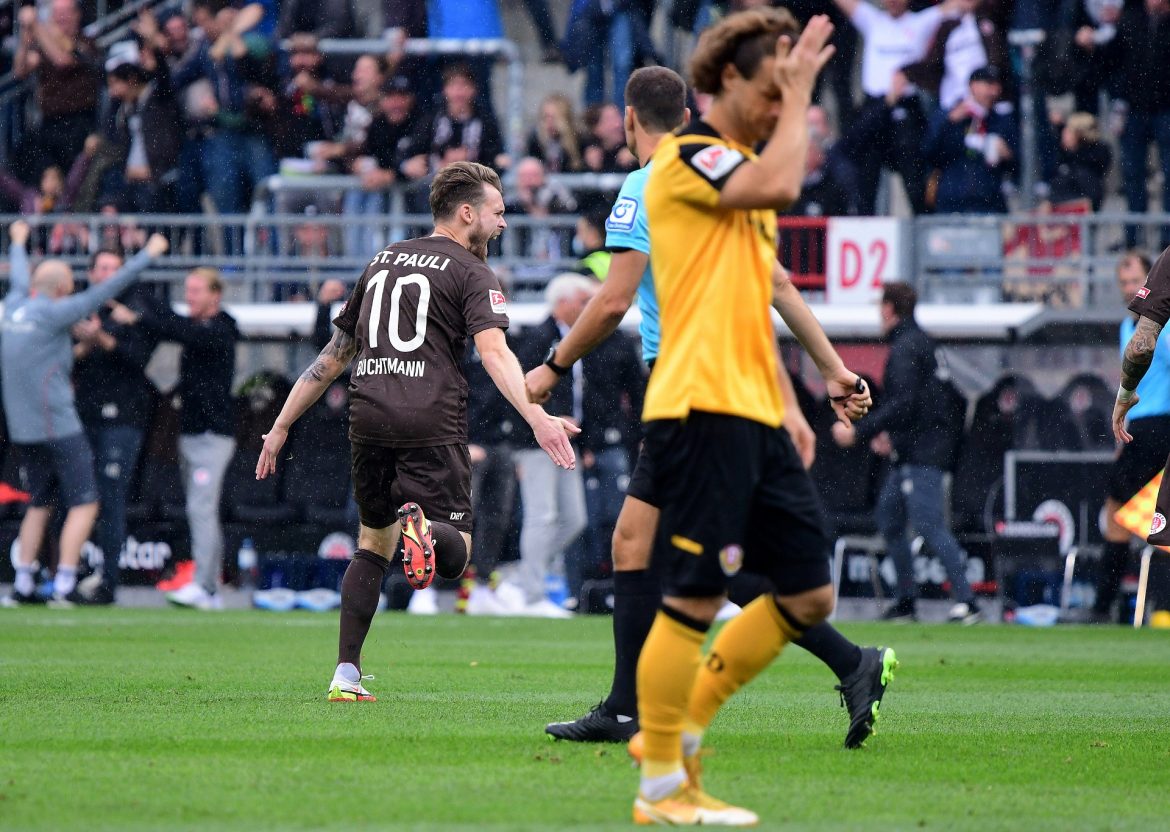 FC St.Pauli wins easily against Dynamo Dresden. 3:0 at the Millerntor, where Dynamo have never been able to win anyway. Was that to be expected? Well, not really. It’s still nice, of course.
(Cover picture: Peter Böhmer)

Why was this not to be expected?

Weil diese Trümmertruppe immer wenn’s ernst wird vergeigt.
(Because this shambles squad always blows it when it gets serious.)

According to the results so far, a leap to the top of the table was on the agenda and, in view of four home games with four victories, was almost to be expected. Dynamo Dresden was an opponent who had never won at the Millerntor in nine games. HSV had weakened with the point in Aue, so we could also extend the lead over our neighbour.

Everything, really EVERYTHING, pointed to the fact that this simply had to go wrong.

But lo and behold, this season everything is different. So let’s look at a few statistics from the “useless knowledge” section:

I had given you hope on Friday that Tim would be back in the starting line-up and would write a match analysis. But today he dropped out at similar short notice as Maximilian Dittgen (“slightly injured“) and so I am once again faced with the question of whether anyone really wants to read my non-existent professional expertise on footballing events – and I answer this with a clear “No!”. So you’ll have to wait until the Heidenheim game after all (but then really).

I, on the other hand, will confine myself to the details, for everything else you will have to make do with the Kicker and the Sportschau.
The fuss began well in advance when the Dresden Ultras announced that they would be staying away because of the 2G rule because this was not solidarity and those who were “only” being tested would be excluded. Mind you, this “solidarity” is also applied to all those who do not want to be vaccinated. In the VdS interview, Dynamo fan Uwe at least tries to explain the thoughts of his club’s fans and does so very respectably, but he can’t hide the fact that he is a clear supporter of 2G. I’m not even going to start the discussion here, but I’d still like to know why Dynamo uses 3G at its own home games and thus shows a lack of solidarity with all those who are neither recovered nor vaccinated and simply don’t want to be tested, because no one really thinks about them… okay, okay, never mind.
(And yes, a solution for those who cannot be vaccinated for medical reasons would be nice. In Bremen, that also worked on Friday).

For all the joy about not having to redesign the toilet area in the south after the game, that there was no underground and sexist wallpaper from the guest block – it would simply have been much nicer to wish the packed guest block a nice journey home after this game with a smile. (Unpopular opinion, maybe. But I’m already quite sure that we will hear a similar announcement from the guest fans in Rostock before our next game – and home victories against Dynamo and Hansa without guest fans are only half as nice).

Back to today: The slight changes in the admission procedure seem to have worked well, my admission to the Gegengerade took less than two minutes (around 12:00).
There was significantly more security staff on duty, and the areas of the Gegengerade could be changed flexibly, at least until kick-off. The entrance to the south, which you can see from the Gegengerade, also seemed easily accessible for the most part and without too long queues.
Let’s see what conclusions the club draws from this. Thanks to the international break, the next home game against Hansa Rostock is still some time away.

And then something completely different: The introduction of the LED boards caused some discussion a few years ago, but in the meantime, they are certainly accepted – which is probably also due to the fact that they are used quite cautiously by the club and animations are still prohibited. One argument in favour of this was that it would allow a more flexible reaction – and this is exactly what was done today, for example, by greeting the flyer service Hahn. (Twitter // Backgrounds)

A quick look at the game:
While the majority of the crowd was still wishing their retinas would recover quickly after seeing the ugly Dresden warm-up jerseys, Kofi Kyereh was already running towards goal and almost scored the lead after seven seconds. The lead came 49 seconds later when Christopher Buchtmann (back in the starting line-up for the first time in almost two years), who had replaced Dittgen, first won the ball himself in the attacking third, then Kyereh hacked it back to Buchtmann, who fired it into the top left-hand corner.

Dynamo showed nothing in the first half, St.Pauli combined and played themselves into such a frenzy that you could have thought they had forgotten that football is first and foremost about goals – because they didn’t score.
And just as Dynamo were gaining more control of the game in the second half, the VAR came on. Hartel had tried to find the way to the goal in the penalty area in interaction with Burgstaller and was felled in the process, but the ball was with Burgstaller and referee Bastian Dankert therefore probably overlooked the foul play – but was contacted by Sascha Stegemann from Cologne and then briefly convinced himself. The penalty thus falls into the category “rarely whistled in practice, but nevertheless completely justified” and from my point of view therefore also a new argument FOR the video evidence, as bad as its reputation currently is.

This finally broke Dynamo’s resistance. Timo Schultz even made use of his substitution quota in the 87th and 91st minutes with two substitute defensive players each, of whom Marcel Beifus then also took his place up front (something he had also done in his younger years) and was then sent on his way by Jakov Medić in the 93rd minute and was allowed to set the final point.

Top of the league, international break, then at Heidenheim and then against Hansa.