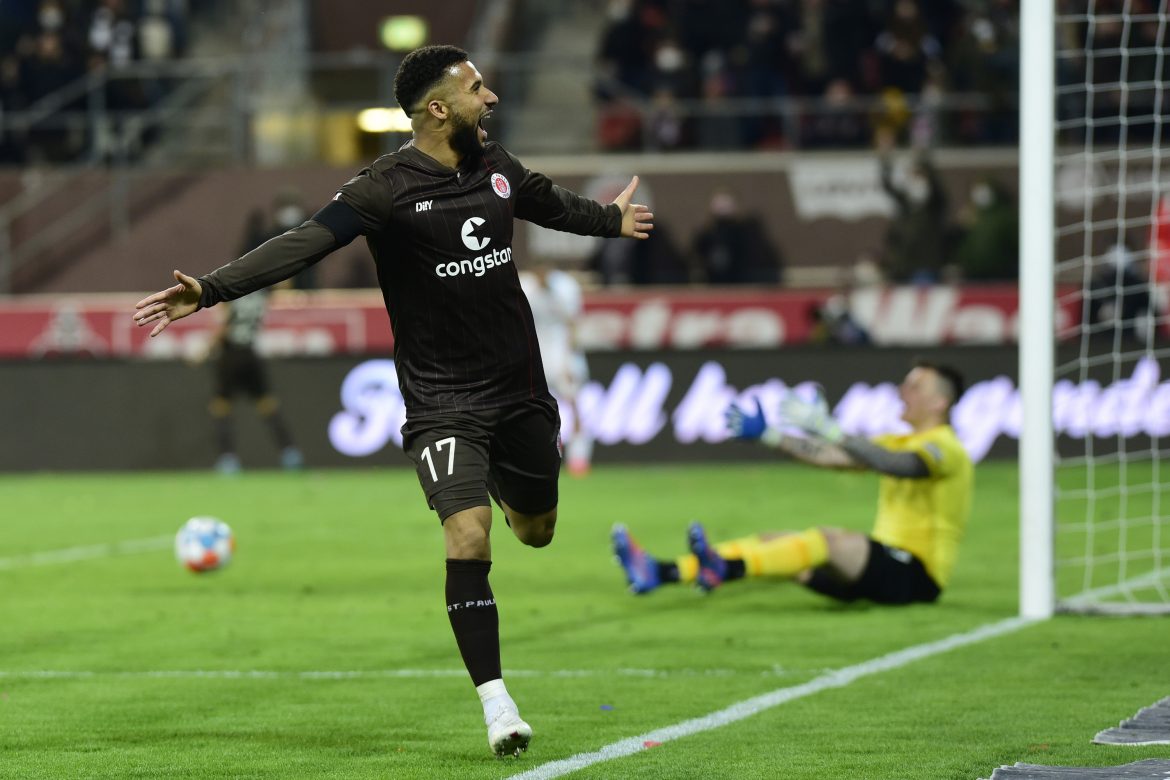 …that’s our St. Pauli! FC St. Pauli beats 1. FC Heidenheim. What an important victory! In a game that had absolutely nothing to do with the term itself. FC St. Pauli worked hard and, after an enormously concentrated and patient performance, deserved to keep the three points at the Millerntor and be happy to spend the international break in a promotion place.
(Cover picture: Peter Böhmer)

As expected, FC St. Pauli made no changes to their starting eleven compared to the second half against Dynamo Dresden. This meant that Eric Smith was back in the starting eleven after a long absence. As a result, Jackson Irvine moved a little further forward from the sixth position again, displacing Christopher Buchtmann from the starting line-up there.

There was something remarkable about this: none of the players in the starting line-up had been under contract with FC St. Pauli almost two years ago, i.e. when the Millerntor last had no spectator restrictions. Yesterday evening made us aware once again of the radical change that has taken place at the Millerntor.

The team then formed a three-man backline, more precisely a 3-5-2 against the diamond of FC St. Pauli. This is a rather unusual formation for 1. FC Heidenheim (which I had not expected in the preliminary report). But it was not really noticeable that it was unusual for the team. Frank Schmidt’s team was extremely well organised and disciplined in their defensive work.

This report will mainly deal with Heidenheim’s defensive work and FC St. Pauli’s reaction to it. Because the best defence in the division according to xG showed impressively why they rightly bear that very title. The FCH was very well adjusted to the FC St. Pauli game. At the post-match press conference, Timo Schultz emphasised the good communication within the Heidenheim team and what a tough nut his team had to crack.

The 3-5-2 of 1. FC Heidenheim showed itself very well adjusted to all areas of FC St. Pauli. Against the two centre-backs and six-man Smith, the two strikers Kühlwetter and Schimmer lined up. The two kept the distance between them small so that on the one hand they blocked the vertical passing routes for Beifus and Medić and additionally kept Smith in their cover shadow. In this way, two players were able to keep three FC St. Pauli players in check quite well, even if they were unable to pressure the centre-backs.

One row further back, Heidenheim operated with a strong man-orientation. The two wing-backs Mohr and Rittmüller always kept the distance to Paqarada and Dźwigała very small, so a controlled build-up via the two wing-backs was not possible for FC St. Pauli.

Not much could come from the two eighth positions for the build-up of play either, as Jackson Irvine and Marcel Hartel were even more closely guarded than the wing-backs. Burnić and Theuerkauf were really remarkably close to both of them. FCH coach Schmidt commented later: “The closer we got to our own goal, the more man-oriented we wanted to play in central midfield.”

At first glance, the only exit strategy left for FC St. Pauli was to play long balls to Makienok. But the skilful passing with one man less in the front line had the big advantage for Heidenheim that they could act in superior numbers elsewhere. When FCSP had possession of the ball, six-man Andreas Geipl always dropped back, which meant that FC St. Pauli’s offensive triangle had to act against four Heidenheim players.
The long ball to Makienok, actually a good option when the full-backs and eights are taken out of the game, was not as effective as it had been recently. This was because Heidenheim was able to win almost all second balls due to their superior numbers. Frank Schmidt said after the game that this last-row superiority was enormously important to him and this priority definitely paid off in the first half.

It then came to a classic stalemate in the first half. FC Heidenheim was extremely disciplined defensively and took very few risks offensively. FC St. Pauli tried a lot but did not take any offensive risks, which was advisable in view of Heidenheim’s strength in switching moments and FCSP’s problems in those very moments. Therefore, a battle of attrition developed, including a lot of nickels and dimes in the direct duels.

After the final whistle, the big topic from Heidenheim’s point of view was a scene from the 22nd minute: A cross landed on Medić’s arm. Neither in the stadium nor from the TV pictures can I make out whether the ball was touched by the head beforehand. The Heidenheim team would have liked to have had a penalty for that. Instead, they got very strong words from Timo Schultz at the press conference:

“In the last two years, the handball rule has become such a mess that no one is happy with it anymore, and the referees are the last ones to be happy. (…) I find it rather sad that we have to discuss such scenes. Frank Schmidt is 100% right about one thing: such penalties are always given. (…) But should the players chop off their hands or walk around with them behind their backs all the time? I think we have to change our basic approach to this rule, ask ourselves more whether it was intentional. (…) Maybe we can revolutionise the rule and say that there is an indirect free kick in such situations. (…) Nobody wants to have such penalties against them. But the problem is that they are whistled all the time.”

Timo Schultz on Jakov Medić’s alleged handball against the rules

Back to the game:
I think that no FC St. Pauli opponent this season has responded better to all the team’s strengths than 1. FC Heidenheim. The six-man area was controlled, the two eights were blocked, the full-backs were tackled aggressively and the defence against long balls succeeded because the team had an overabundance in defence. Heidenheim had a suitable answer to all options of the FCSP game. I found that incredibly strong and this defensive work was then almost something like an art form in itself. But what was at least as strong: FC St. Pauli’s answers to that as the game went on.

While in the first half there were only compelling chances for the Heidenheim team (after switching moments or second balls), FCSP got better and better into the game, also thanks to some changes.
In response to the simple passing option to Eric Smith, the latter simply fell between the two centre-backs. This also had the advantage that when the ball was lost, there were three players behind the two Heidenheim strikers, as Timo Schultz told us after the game. Another reaction was then that Jackson Irvine moved into the six-man area when Smith fell between the centre-backs (Schultz on this: “Because of their man-orientation, they had to free up spaces behind with the switch of Jackson Irvine to the ten (note: for me, that’s the six-man area).” – By “freeing up spaces behind” Schultz meant that Theuerkauf went the way of Irvine, thus freeing up one of the half-spaces.

This change was particularly beneficial for the build-up play due to another adjustment: At the beginning of the game, Makienok, Burgstaller and Kyereh often gathered together in the centre in order to have a good position for long balls. As the game progressed, however, the three moved wider and wider. This meant that less of a triangle (= two strikers, one ten) was formed, but rather a three-man line with one central and two outfield strikers.
This change confronted the Heidenheim defence with tasks because the three centre-backs would now also have had to move out wide. And since that is a stupid idea with a three-man defence, because the distances become too big, the wing-backs were forced to orientate themselves a bit more to the back. The result was that there was more space for the FCSP wing-backs. And suddenly, FC St. Pauli had a clear advantage, especially at the beginning of the second half.

But it was not only the tactical changes that ultimately brought success for FC St. Pauli. Because there is a simple and effective recipe against man-orientation: You simply have to win the direct duels. And that’s exactly what they did much better in the second half because there was a bit more space and Heidenheim’s grip was slightly delayed.
Little wonder then that the three players with possibly the greatest playing quality at FC St. Pauli were responsible for the goal of the day: Marcel Hartel showed a good running path and thus created space for Paqarada, whom he found with a pass against the running direction of the entire defence. Paqarada showed once again that FC St. Pauli finally has an outside defender who can hit really good crosses. He has already provided nine assists this season. Eight of them were crosses (two from corners). And Kyereh’s movement in space is simply top-flight-standard.

What impressed me most about FC St. Pauli in this match was the patience with which they acted. It was also clear that if the team had taken too many offensive risks, Heidenheim might have punished them. It was important not to lose one’s head and still become more compelling offensively. It was a constant weighing up of how much risk was appropriate in the offensive. It was a real game of patience that demanded enormous confidence in one’s own strength. It was precisely their own impatience, the excessive risk in the offensive that was the undoing of FCSP on more than one occasion this season.

After FC St. Pauli took the lead, Heidenheim switched to a four-man defence. Malone and Leipertz came into the game and positioned themselves extremely offensively on the flanks. This inevitably created spaces for FCSP. Chances in transition moments were the result, but the early decision did not come.
Instead, FCSP went into injury time mode early on and started to use their own corners for time play as early as the 85th minute. That was a bit early and Timo Schultz had his hands full telling his team not to drop so low when Heidenheim had the ball.

But not only Heidenheim showed a disciplined and concentrated performance in defence. FCSP also defended extremely well and allowed very few Heidenheim chances in the second half (apart from the crossbar header by substitute Kleindienst). The team had highly deserved the “zero” through hard work.
It may not have been the greatest game of the season. But beauty is always in the eye of the beholder. I found the patience with which the team acted despite the strong defensive behaviour of the opponents very impressive. A really mature performance. And in the current situation, it doesn’t matter how good it looks or doesn’t look. Because even a work victory is rewarded with three points!

After the first leg, I bit my tongue and stuck my fingers together. The title of the match report at the time was: That’s how you get prom… to win in Heidenheim!

Now, after this really mature performance, after this enormous game of patience, in which FC St. Pauli never lost concentration and acted in a disciplined manner until the very end, I write quite openly: That’s how a to-be-promoted team plays!