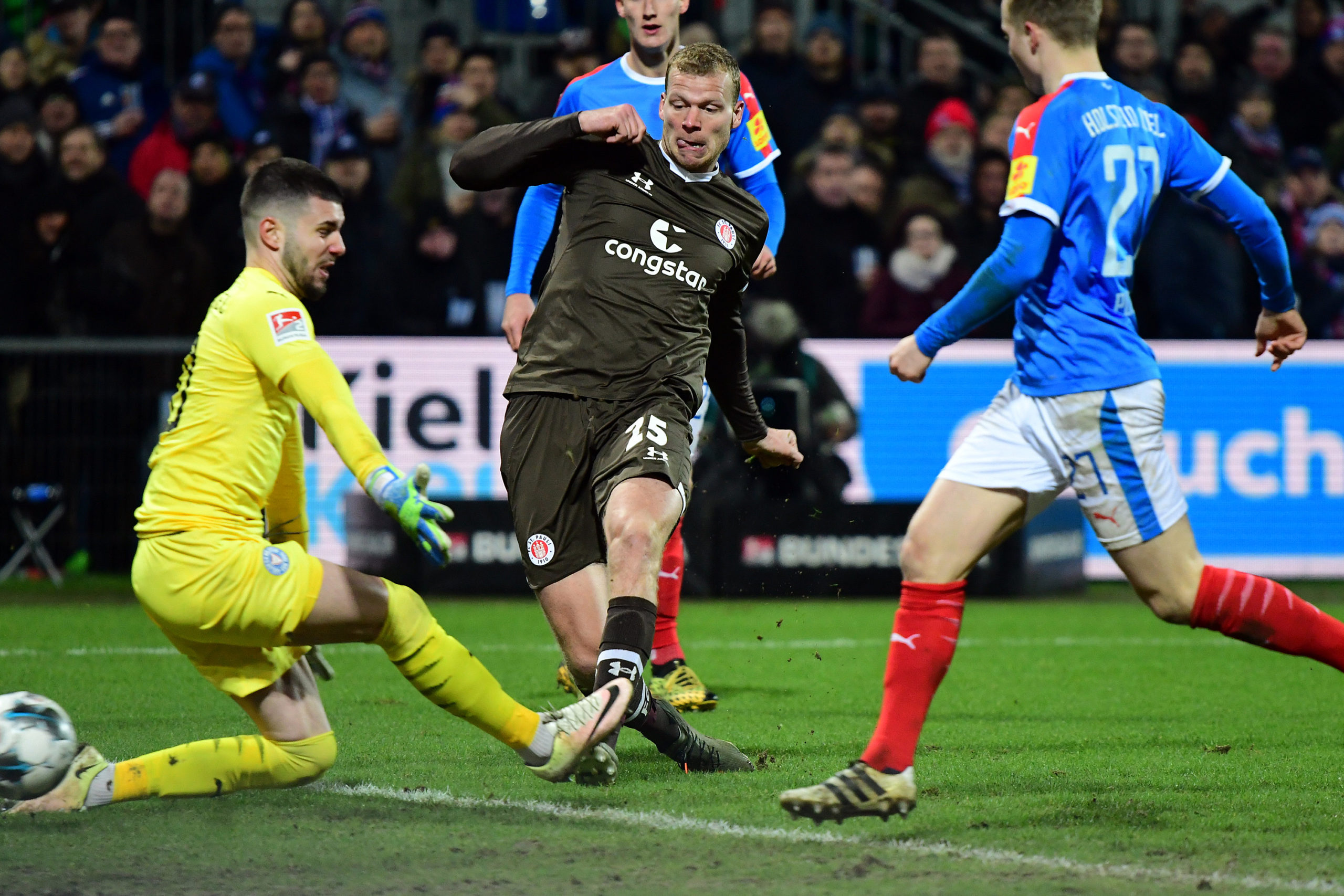 Because that’s all that remains from yesterday’s evening: a piece of crap. It was hurting a lot. Not really as expected but therefore with even more pain. It took us ages to find into the match, we conceded a goal after a corner, had too many huge chances, screwed up an indirect free kick/penalty. The word crap could become one of the most used ones in this text.

Due to the storm, the day already started with slight discomfort concerning the question if the match will happen at all. But when the match was confirmed to happen around noon, soon the news was spread that storm Sabine [Ciara in the UK] would cause some difficulties on the railway between Hamburg and Kiel. Which resulted in a major detour for those who traveled by train as they had to embark on the rather cumbersome, not to say crappy, route via Lübeck, so that they only arrived at the stadium shortly before the starting whistle. Anyway, Kiel isn’t well-known for their hospitality. No matter if related to the police or the stewards, it’s simply difficult either way. But hey, the nasty net which hindered the view during last season’s match was gone this time.

Fortunately, I was a little better off. However, the seats allocated for the match report radio were rather shabby but I did book me a spot for the travel on the bus of the Fanladen spontaneously. And we arrived surprisingly early in Kiel. Too early for the police which was completely overstrained with our arrival as it took them quite some time to deal with us. In general, it’s a cumbersome travel route to the stadium. Even if the road from the motorway leads directly to the ground, we had to take a huge detour through a residential area because the petrol station on the usual route was considered a dangerous spot. Well. By the way, it was the first tour on which alcohol consumption was prohibited. Dude, it must have been horrible bus trips which resulted in the prohibition (I was only traveling on one of these tours which eventually resulted in this decision but got told the rest about it from others). In general, prohibitions are only semi-cool but seemed necessary in this case.

To be honest: I expected a huge defeat. Kiel did play too strong during the last matches. Combined with our weakness to score away, it resulted in my expectation of an imminent fiasco. And with regard to the course of the match, specifically around the time, the 1-0 was scored, there were numerous hints that exactly this will happen.

However, we were somehow able to play a balanced match during the first 20 minutes. Although not having very much own defining moments, due to the narrow spaces we were able to keep the Kiel guys away from our own goal. This resulted in Kiel having a lot of ball possession but did not get an idea of how to use it properly. It was thereby interesting to witness returning patterns: Both central defenders were passing themselves the ball back and forth until central striker Lee decided to drop into the centre. Whenever he got the ball then, he quickly passed it to the flanks where Kiel was trying to outnumber us with three players respectively.

In the beginning, the FCSP was positioning themselves against these movements. Which didn’t work out as planned. It was not only that both central defenders, Thesker and Wahl, were able to relaxedly pass themselves the ball, no, also the dropping of Lee into the centre was not dealt with properly. While Sobota was marking the defensive midfielder up to the 1-0 man-to-man, also Benatelli & Flum were kept busy on the flanks by Mühling and Özcan. And this offered spaces in the centre into which Lee could drop.

Well, it changed after we conceded the first goal. Now, Sobota acted a bit closer when pressing  and moved up to Veerman while Benatelli took over his position in the centre (which did not work very well for the rest of the first half as Meffert still got offered enough spaces as he was still frequently unmarked.) At the same time, the wingers Miyaichi and Gyökeres switched positions and moved to their usual flanks.

We started much better into the second half. I couldn’t witness any tactical changes (which of course doesn’t mean that there were no such changes). But maybe it was only the momentum which now played in favour of the FCSP. However, after a completely brilliantly performed move, we deservedly scored the equalizer (Himmelman-Flum-Zander-Gyökeres-Veerman: what a brilliant play!) And from now on, an unbelievably intensive match developed with a high pulse on both sides. The 2-1 was scored after a corner ball. Wait, there’s an adjective missing: *crappy. Of course, Himmelmann didn’t look very good then. But shit happens. And it felt as if both teams and their substitutes from the bench, the physio-team and the bus driver were gathering in front of Himmelmann. But of course, this is the keeper’s jurisdiction. And so it was gone, our beautiful “no-goal-conceded-after-a-corner-ball”-series. Scored by Kiel which only managed to score their second goal of the season after a corner ball at all. Quite a golden piece of crap though.

It resulted in a phase of constant pressure performed by the FCSP which we did not witness for quite some time during the last fifteen minutes of a match. And this phase of pressure contained besides another top-chance of Ohlsson a real drama which ended in a huge pile of shit. The penalty was indisputable. But that the phase between the handball and the final decision about the penalty took so long is simply a weak performance and very stressful, too. Why does the referee need to re-watch the situation at all after another referee (namely the one in Cologne) clearly pointed at his mistake? It takes so much time. And it also takes away the credibility of the referee on the pitch when another referee can solve the situation assisted by various slow motions captures of the situation. A completely unnecessary drama (please also read Maik’s text about the VAR in this regard) It resulted in a penalty and the (deserved) equalizer appeared already handed to us on a silver platter. The only issue was that Knoll wasn’t on the pitch and Diamantakos wasn’t in the squad at all (something we need to discuss separately). So Henk took the responsibility. He had to, as Ryo did hand him the ball. And what followed was again a part of the category: shit happens. Very bitter. And as if fate was planning to take the piss on us again, there was another indirect free kick. If we can’t score from eleven metres distance, maybe we can from five? Dream on. And after this scene, while the laughter was still on, Henk had another chance from three metres. What a crap!

And already in three days, Dynamo Dresden will visit the Millerntor. And thanks to yesterday’s result this match turned from one that you must not lose into one you’ll have to win. Crap.

5 thoughts on “The golden piece of crap belongs to us!”