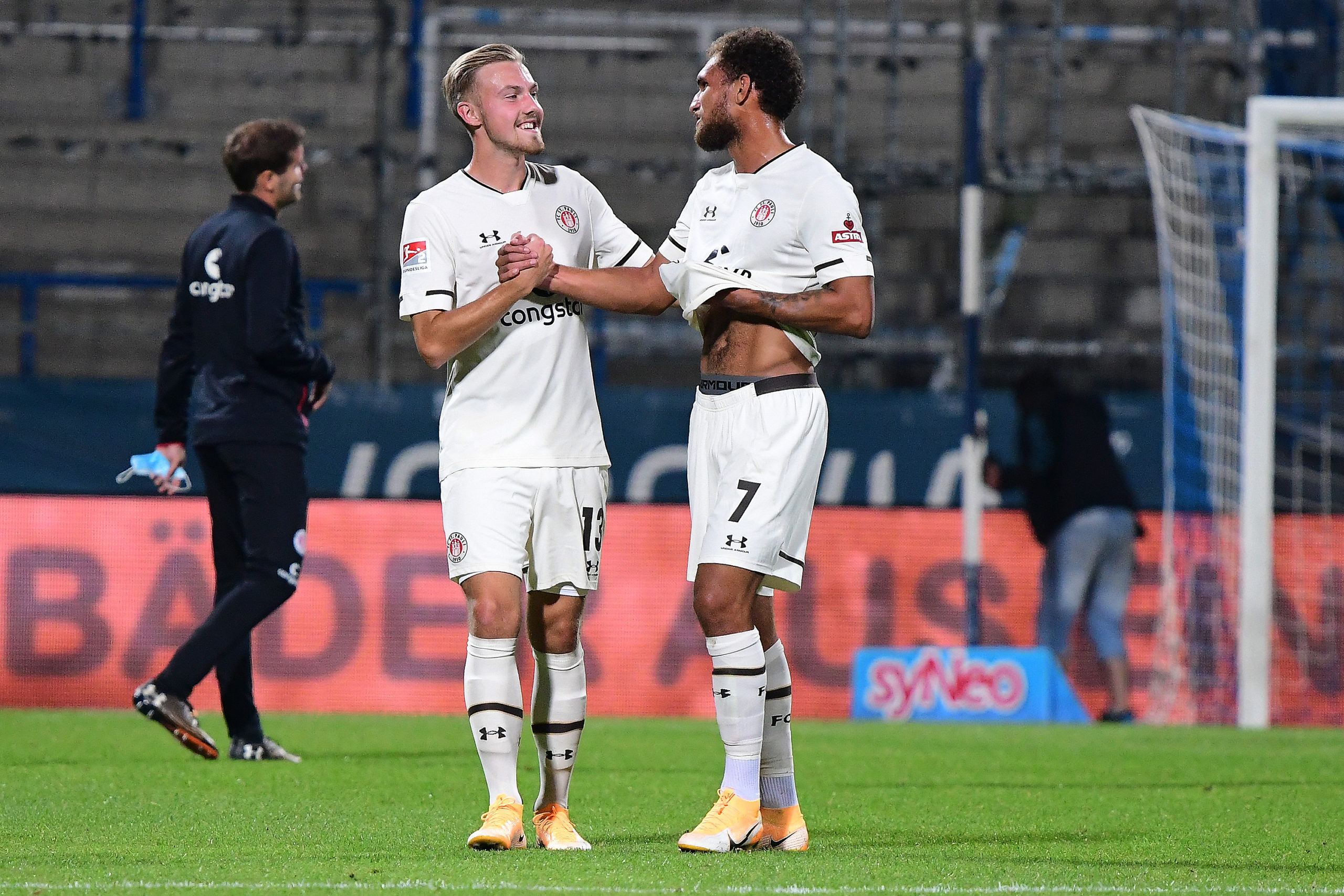 Wellllll, you can certainly do it like that: Make the opponent feel safe. To reassure ’em further, even allow them to score the second goal. And then you score two tiny little goals and every single one, literally, every single one will rub their eyes astonishedly.
The FC St. Pauli gains their first point with a 2-2 draw in Bochum, a point, which ten minutes before the match ended, only some did still hope for and even less expected it to happen.
Slightly tipsy by joy, some of us walked into the Fanladen after the match, at least virtually.
(Cover picture: Peter Böhmer)

Line-up
The already familiar backline of three from the pre-season was equipped with  Daniel Buballa, Christopher Avevor and Sebastian Ohlsson, joined by the wingbacks Leart Paqarada on the left and Jannes Wieckhoff on the right who both joined the offence whenever in ball possession.
In the centre acted Marvin Knoll and Rico Benatelli, even more offensive Maximilian Dittgen and Rodrigo Zalazar, at the very front line there was Daniel-Kofi Kyereh.
In the 65th minute, Finn-Ole Becker was substituted for Knoll but even more important for the play at the very front line was the substitution of Lukas Daschner for Dittgen in the 77th Minute.
Further substitutions were made with Luca Zander, Philipp Ziereis and Kevin Lankford so that Timo Schultz entirely used the allowed number of five substitutions of this season while Bochum substituted only two of their players.

How the match went
During the first half, the match was pretty balanced with a little more weight of Bochum with regards to ball possession and pitch coverage but without any big chance for goals on both sides.
So this is why a set-piece made the difference when Robert Zulj scored with a free-kick in the 26th minute when he kicked the ball with his right foot from the left side and the ball simply passed friends and foe and went straight into the net – a really ungrateful thing for Robin Himmelmann. If he dives downward, another one might reach the ball and he’d make a fool out of himself if he doesn’t dive downward and no one else touches the ball (as happened) he’s even more of a fool. Blatant goalie mistake? Of course not but with a little more of luck during the process of making decisions, one could have saved this ball.
Still without a budgetary striker, the well-known difficulty to develop any force at the front continued. At the back, the brown and white acted pretty safely but all it took was a set-piece of the opponent and when you’re not capable to develop something at the front, that’s enough which was oftentimes also due to inaccurate passes in the last third.

The by far biggest chance to equalize for St. Pauli happened already in the 70th minute in the second half when the then substituted Becker chipped the ball from a central position to Kyereh who stopped the ball with his chest and then took it volley to first miss Riemann but unfortunately also the goal.
The 0:2 was scored in the 77th minute after a very unprecise pass of Avevor to Wieckhoff, who did not come closer towards the ball. Holtmann then passed to Ganvoula, who was free on the left and could easily pass the ball from the goal line back to the line of the six-yard box where Simon Zoller was entirely free and thus unhindered to shoot the ball into the empty goal. After this goal, no one really expected that we could gain any points here.

But what followed were the minutes of Daniel-Kofi Kyereh – and they started with a lucky situation, something you simply deserve in such moments. Lankford centres from the right and Vassilis Lampropoulos aims to clear the situation, leaned to the back and already slightly falling, then Daschner is there and aims to shoot but his shot is saved by Riemann – and then Kofi simply scored with a tap-in (84.). And while probably most of us were still mumbling a “Does work somehow though”, Lukas Daschner did something amazing when he passed an incredibly difficult ball, a somewhat “side-footed stop-lift” pass, straight into the running path of Kyereh who then proved his punch-qualities. Bang!!! (86.)
On the other side, the VfL was almost taking the lead again but Himmelmann parried strongly against Tesche, freely approaching in front of him.
Oh well.. and we were almost able to witness one of the fastest hattricks of the brown and white professional club history but after Paqarada passed the ball across and over to Kyereh, Kyereh somehow rushed to the back post but fiddly missed the goal while smashing his lower body against Bochum’s post. We really hope that this did not cause any long-term injury – we got reminded of  Richy Neudecker, who once at the Millerntor scored a goal in front of the south stands but also smashed himself in a similar way against the post.

Tactics
The match has to be reviewed by taking two different halves into account: During the first half, Bochum had much more ball possession and could make good use of the offensive half-spaces (mostly due to the dropping of the offensive wingers Zoller and Holtmann while their wingbacks also moved towards them). This principle of front row dropping players is well-known to the FCSP: They also played these tactics successfully in the friendly against SønderjyskE. But in their own defence, this tactic caused some troubles as the defensive assignment of these dropping players could not be sorted straight away. Should the wingbacks move up in such situations? Rather not as this would cause entirely undefended flanks and spaces for Bochums wingbacks. Should the own offensive winger drop back? Again rather not, as this player is busy to block the spaces in front of him. A feasible solution would be that the defensive midfielders move to the half-space which would require a good safety net in their backs and in general a decent communication within the team on the pitch. So it’s not an easy-as-pie job to defend this way of play with a formation like ours. But when space was covered, so that the players in the half-spaces could be set under pressure after receiving the ball, this caused some promising ball gains in exactly this area. So it’s probably possible that this was some sort of pressing-trap and exactly the area in which the FCSP planned to gain the ball and thus probably deliberately left the space uncovered. If this was actually the plan, it worked ok-ish during the first half and pretty well during the second.

Nevertheless, the offensive approaches of the FCSP have to be classified as “approaches” only. Because as likely as the FCSP gained a lot of space after ball gains for their transition play, as likely it was that the resulting chances were consequently left out.
This was already the case during the first half. But in the second half, the number of imprecisely played transitions moments reached horrifying regions. But then, Finn-Ole Becker and first and foremost Lukas Daschner appeared on the pitch and out of a sudden the offensive actions had a lot of sense and the passes reached their goals respectively. Maybe, it’s a bit unfair to reduce the success to these two players only, it’s also possible that it would have been just a matter of time until Dittgen / Wieckhoff / Zalazar / Knoll / Paqarada would have succeeded in the same way. But it is remarkable that the offensive section had a completely different drive since then. Quite appealing. Very.

Zoom-Meeting in the Fanladen
The Fanladen was also spinning their heads about how to elicit a feeling of community during times of social distancing and matches behind closed doors and thus invited everyone to join a Zoom-meeting at 22.30h yesterday. Okay, that’s a difficult appointment during the week. Monday night matches are still stupid.
Sven and Julian were sitting in the Fanladen, and Justus and Nils were heading back from Bochum to Hamburg and were contacted every now and then and so a small but nice discussion about the match and all other topics regarding the FCSP emerged. In particular, they discussed how being back in the stadium in Bochum felt for Justus and Nils and how it might turn out next Sunday being back at the Millerntor. We hope to get more information about that from the club during the course of the day.
The Zoom-Meeting would have definitely deserved some more participants, however, for a first trial this was pretty decent and there were much less technical difficulties than in the first YouTube-trials of the MillernTon.

5 thoughts on “VfL Bochum – FCSP: And it all ended with a bang!”