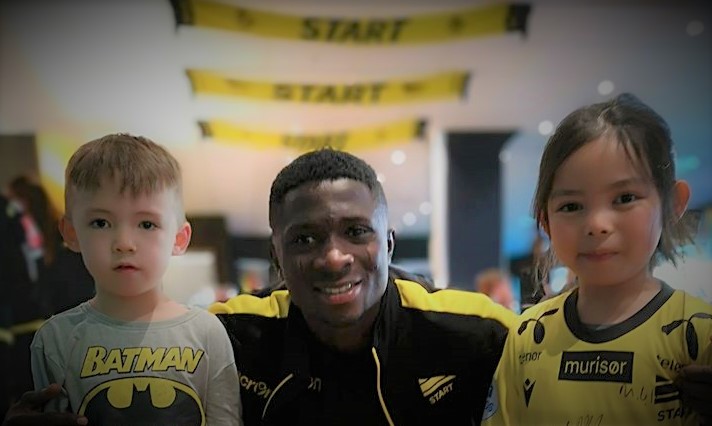 Tuesday, 18th of August 2020, before noon.
The internal MillernTon-editorial-chat: „Afeez Aremu… did you ever hear of him?“ – „Whoooo? Nope.“ – „Might be a new signing for us as reported by www.StrictlyConfidentialFootballRumours.com, which cites two independent Norwegian newspapers.“ – „No idea, wait a sec. […] Errr… yep, could be a good fit, the club is still searching for a good defensive midfielder It’s a pity that we didn’t play against IK Start Kristiansand more frequently recently so that we do not have any VdS/NdS-Podcast interview partners. I’ll have to do some research“ // [Ten minutes later] „Look, a cool blog, they already published something about him. I don’t understand a single word but I’ll contact them.“

Well – To ignore rumours in public is the one thing and we’ll continue to do so in the future, but being nevertheless well prepared is a different aspect. This was already of big help when there was a rumour about Lukas Daschner (and in this case, all the upfront news were pretty obvious already). Also with this signing, the announcing news had been pretty precise already. Precise enough, from our perspective, to start our own preparations. And as all media reporting on the FCSP did already publish their views and opinions on the dawning transfer, no one should be astonished to read this Millernton article now either. Because the aforementioned contact to the Norwegian blogger was actually established pretty quickly and uncomplicated which allowed us to inform you again already shortly after the club announced the transfer of our new player (this article was already finished since last Wednesday in our draft folder).

Afeez Aremu is originally from Nigeria and his football career thus started there at the Sunshine Stars. From there he was transferred within the country to Awka United in 2017. Still in the same year, he was further transferred to Inter Allies in Ghana. And less than two months later, he was transferred to IK Start Kristiansand. And at latest at this point, I started wondering if I made a mistake while copying these data or if Afeez Aremu does indeed have a rather uncommon career.
At Kristiansand Aremu quickly became a member of the starting line-up as a defensive midfielder in the  Eliteserien. And all this at the age of 18 already. However, Kristiansand got relegated from the first Norwegian division straight away during his first season there. But what followed was the direct promotion and thus Aremu did make his last appearances for Kristiansand back in the Eliteserien. Next to that, he already also played in the U20 team of Nigeria at the Africa Cup in early 2019.

If you want to learn more about Afeez Aremu and have two hours of your leisure time available, I highly recommend these two YouTube-episodes in which he also makes an appearance and where he talks about many things in a very open manner (Episode 1 and Episode 2). And of course, there’s also another Skills & Goals – Video of Aremu (just click on the link or watch the video in the player further down), which we’re not hiding as there are some very successful scenes in it.

To get to know Afeez Aremu (even) better, I asked Egil a few questions, who is running the blog Nytt og gammelt om IK Start (which stands for something like “News and old stories about IK Start“).

Moin Egil. Afeez Aremu moves from IK Start Kristiansand to FC St. Pauli in the second German division. Do you think he is “ready” for 2. Bundesliga?

Aremu is a player that takes the playing level quite fast, and already at age 18 he showed incredible quality in the Norwegian Eliteserie and played 30 games for the club. But due to the fact that we had a very young team, we did not manage to avoid relegation in 2018, so Aremu and the rest of the team played on level 2 last year. Though playing in a defensive position, he managed to score three goals, all screamers. In the 2019 season he really grew into the position and became one of the most important players for the team, covering a massive amount of space and having an ability to always be where the ball ends up. Aremu has himself expressed that he wants to take a small step to a better European league, and I believe 2. Bundesliga could be a good stepping stone for him. I think with some patience and trust he can become a top-level player in a few years.

Afeez Aremu plays as a defensive midfielder. FCSP-manager Timo Schultz was looking for a “physical strong midfielder”. Does it fit?

Aremu is definitely a strong and physical midfielder with great positioning. He covers a lot of space on the field, is aggressive and is an excellent ball-winner. He can be compared with another Start-player, Anthony Annan, that played a few years for Schalke 04 and 1860 München. But he does have some work to do with his precision and choices when having the ball. But he is still young. He has been dominating defensively against a lot more experienced players for several seasons.

FK Start Kristiansand was playing in a 4-2-3-1 formation last season, so with two defensive midfielders. What was the role of Aremu? Was he more active and progressive to the front or was he more securing the situation to avoid counter-attacks?

Aremu has always played as a defensive midfielder with an extremely high work rate.  He is the one breaking up the opposition’s attacks but does come forward on occasions. He likes to shoot, and when he does get a goal, it will always be a screamer. The goal of the season or no goal at all for him. ?

This season Aremu has played only four of possible 15 matches. What’s the reason for it?

So, 2020 was supposed to be the season for Aremu. We went up to the top level and he had two years of experience. He was ready to dominate the league with his skills, but after a couple of matches, he managed to crash on his bike (of all things) and cut a cut in his knee. He was out for a few matches, and when he finally was back, he managed to injure himself on the same place when crashing into a commercial sign after a tackle. By now he should be 100% again, but when Start according to sources rejected a bit from St. Pauli I believe he, or his agent, have decided for him not to play until this transfer is completed.  It’s of course not confirmed by any in the club, but the coach has explained he is 100% fit, but still not in the squad. If we could, we would play him of course.

Aremu was coming to IK Start Kristiansand directly from Africa. Was there any time needed for him to adapt/adjust to the footbal played in Norway’s Eliteserien?

Aremu told in his interview that coming to Norway was a shock. It was wintertime and even with the clothes he brought and requested from the team that met him at the airport, he was freezing. He was unable to fully commit in the tackles in training, as he was afraid for his toes. But after a while, he managed to get the right boots and clothing to really show his potential. In the club, there were already other players from Nigeria and even from his hometown, so he was able to adapt quite quickly. And as his playing style is quite clear, it was not never any issue with adapting to the playing style in Norway.

And who is Afeez Aremu beside the pitch? Any stories we need to know?

He really opened up in his interview with Eagles tracker, and you got to know him on a bit more personal level. He is the youngest of two brothers, who also played football on an international level, but they decided to quit to support Afeez and always got him the best equipment for him to succeed. His favourite player is Wesley Sneijder, and he also looks up to Casemiro from Real Madrid. He really likes the Belgian league and Genk, as he used to play in Westerloo academy in Nigeria. He wants to play a few seasons in Central-Europe and end up in one of the big leagues like France or Spain.  Hopefully, he could play a part in getting St. Pauli up a level again ? Good luck in the coming season.

Thanks a lot for your answers, Egil!

So there he is, another “sparkler” wished-for by Timo Schultz. If Afeez Aremu also makes a good addition to the squad of a second division club here will only turn out within the next couple of weeks during the training sessions. But this staff addition is interesting anyway. And it tells a lot about the scouting-department of a club when they’re able to sign a player who was not on the radar of anybody else, provided the player does really show the desired performance.
And there’s one more thing: Wait, IK Start Kristiansand? This rings a bell!? Yes, indeed! The legendary race to catch up during last year’s playoffs. And a playoff which ends in a club getting promoted is something we’ll take with pleasure as well, Afeez!

And thus, welcome to the Millerntor, Afeez Aremu!

6 thoughts on “Who is Afeez Aremu – A player’s profile”