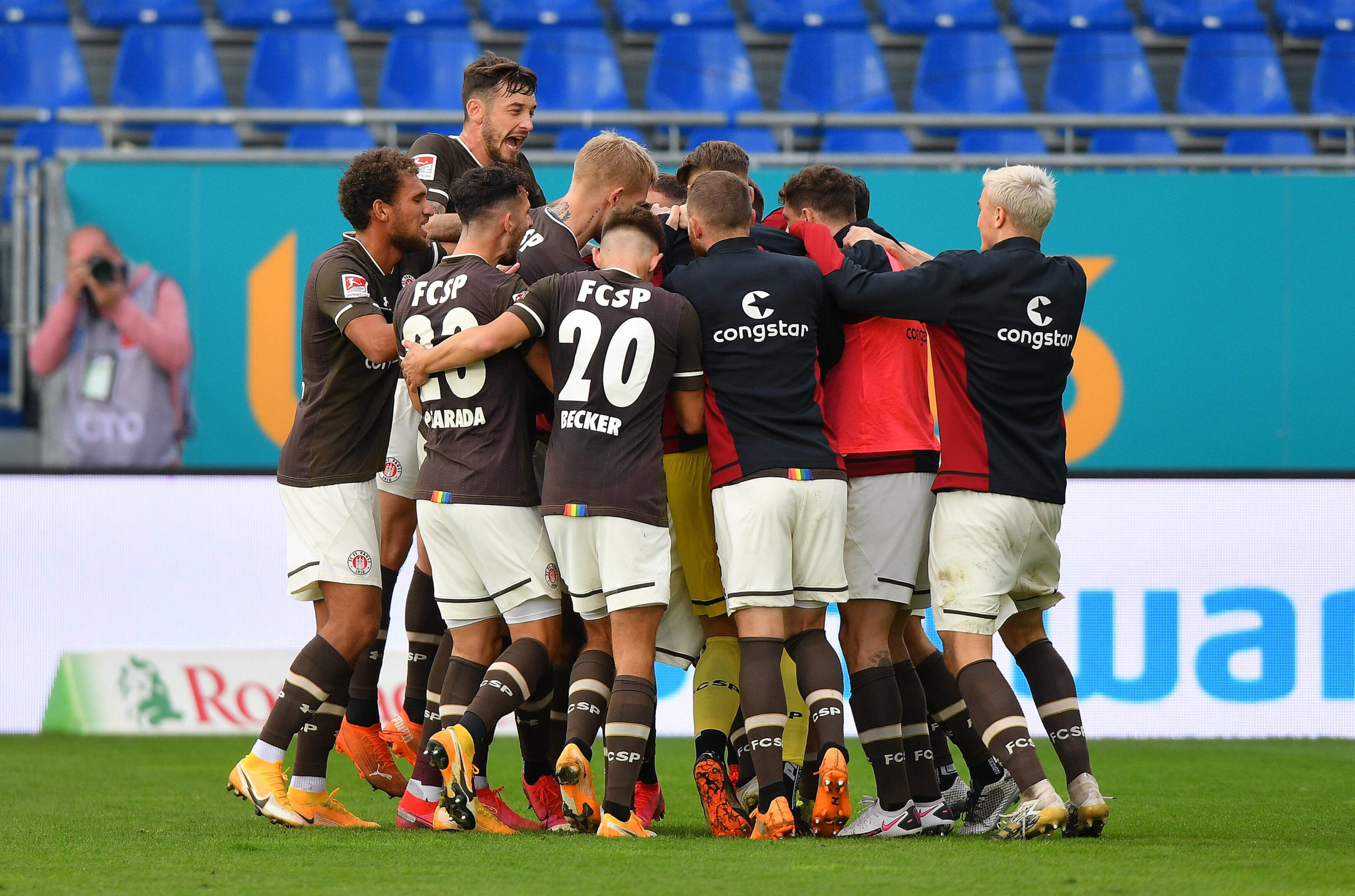 Caaaalm down. It’s gonna be a 2-2 draw. We know it by now: The FC St Pauli will show a great morale and will, despite being behind, get a draw. Well, this time, compared to the matches against Nuremberg and Bochum, the FCSP can be very lucky that they scored a point. Because especially during the second half, SV Darmstadt 98 was clearly the better team and could have had to secure the win due to certain situations. But they didn’t! So the FCSP collects a point in Darmstadt, the first one since 1992.
(Cover picture: imago images / Jan Huebner / via OneFootball)

Compared to the match against Nuremberg, FC St. Pauli changed two players in the starting line-up and thus also changed the basic formation to some extent. For the slightly injured Avevor, Ohlsson moved into the backline of three. His position as a right wingback was covered by Luca Zander. The injured Burgstaller was substituted by Marvin Knoll and this also caused the change in the basic formation: Instead of two forwards and a clear attacking midfielder behind them, the FCSP acted with an almost classical line of five in the midfield and thus a 3-5-2 (flat).
The SV Darmstadt 98 did not change their basic formation and thus kept their expected 4-1-4-1, however, instead of Rapp, Pálsson began as a central defending midfielder, his position as a central defender was covered by Immanuel Höhn.

It was quite interesting to see how Darmstadt initiated their build-up play and how the FCSP responded to that: Because a backline of four usually tempts the playing team to position their wingbacks widely on the flanks when building up. But Darmstadt didn’t do that. Instead, Holland and Bader moved up to where the central defending midfielder was positioned but while doing that they also moved towards the centre. So, when building up, they formed a somewhat 2-3-4-1, which is a strong formation in case they have to defend transition moments but which isn’t a strong weapon to create goal chances either.

Darmstadt did this to create space on the outer positions. And this probably emerging space was then aimed to be covered by the offensive wingers Honsak and Skarke. I specifically write “probably emerging” because the FCSP covered these spaces pretty well so that actually at no time of the match there was any danger resulting from the controlled build-up play of Darmstadt.

As the FCSP was winning these duels on the positions, some promising transition moments emerged. However, due to some inaccuracies, these moments weren’t used to score. Anyway, even when building-up on their own, the FCSP was able to achieve an overweight, at least virtually. This was due to the fact that SV Darmstadt allowed FCSP some space when building-up from their backline of three. Thereby, both wing-backs of the FCSP moved extremely up to the front while the two outer central defenders moved far to the flanks.
This is remarkable because, during the second half, FCSP wasn’t allowed to continue with this built-up play because Serdar Dursun dropped back into the midfield when the FCSP was building-up so that Knoll’s spaces were cut. Only Honsak and Skarke covered the space so that three central defenders faced only two opponents so that they could continue with their build-up in a very relaxed manner. This looked quite appealing, however, at no time during the first half, any striking goal chances resulted out of this built-up play. Nevertheless, if the FCSP would have been able continuing to control the match as they did during the first half, they would have gotten their chances sooner or later.

It was very typical that a set piece led to the lead for Darmstadt at half-time though. The penalty, which then led to the lead, happened through a second ball after a corner ball which could have been defended better. This was a real pity, especially because the jumping run-up of Dursun would have deserved to miss the goal.

But already during the first half, it became rather obvious that the FCSP would not get into trouble because of the Lilly’s formation but because of losing the ball when building up. The risk of having to dangerously defend backwards is taken deliberately by the FCSP which I personally prefer much more than the formation played by SV Darmstadt 98.
Because: Yes it’s true, SV Darmstadt meanwhile managed to offer much more than their version of “long ball – second ball” which they kept playing for ages before. However, they became the superior team because of the ball gains which resulted from their offensive pressing. From their ordered built-up play only little arrived at the front though.

But with the beginning of the second half, Darmstadt changed their pressing behaviour: the FCSP did not get the chance for their relaxed built-up play any longer, instead, the Lillys now consistently pressed against the central defenders already while Dursun did not drop back to midfield any longer. So ball losses became more frequent now and Darmstadt themselves now managed to play some good transition moments.
It was really great to hear over the ambience microphones how Timo Schultz was coaching and pushing his lads and demanding to continue with the flat, courageous built-up play. Which was demanded for some reason. Because the high pressing of Darmstadt resulted in the fact that Darmstadt was facing more 1-to-1 situations in their defence. However, the FCSP only rarely managed to arrive in these spaces, partly because they didn’t build up well-enough, partly because they didn’t try at all and then played a long ball instead. Actually, the FCSP completely lost its structure with the beginning of the second half and did not manage to retrieve it during the course of the match.

However, there was also the chance for a second goal of Darmstadt much earlier. And the 2-0 itself was again another downer: There is this particular player with a certain physique and ability to play headers whose danger was already publicly addressed by Timo Schultz before the match. But anyway, this player gets the chance to play a header after a set piece completely unmarked. It’s unnecessary to mention that this must not happen by any means. And a little later, Serdar Dursun even got another top chance after a set piece. But this time it’s also worth mentioning that Dursun was freed up because one of his teammates blocked his designated defender. Yes, FCSP is lacking physique at set pieces. But this is not enough to explain the things that happened before both goals were scored. To concede a goal after a set piece is simply shite.

But let’s now get to the more beautiful things: The FCSP again did not leave itself down and managed to score the 1-2. Remarkable that during this situation of continuous playing, a total number of five players of FCSP were inside the box of SVD when Lankford centred the ball (and they even managed to control the backspace at this time). As much as Timo Schultz is allowed to get angry about the goals conceded after set pieces as much is Darmstadt coach Markus Anfang allowed to get angry about this particular goal.

But he will get even angrier about the numerous (top-)chances which were left out after transition moments. Because at both intermediate results, 1-0 and 2-1, when FCSP was moving every lad to the front, there were plenty of such chances to decide the match.
From Darmstadt’s perspective, it developed as promised then: Already late into the added time, FCSP gets a penalty kick. Deserved or not? Find out yourselves. Again, we were shown how great Rodrigo Zalazar is when he also picks up the ball in this situation and then scores the goal.

Was it a deserved point? Difficult to say. Because of the way the point was created but also based on the chances (xG 2.6 – 1.8), it’s rather the most undeserved point of the season so far. While we could still worry that we didn’t win against Nuremberg or Bochum, we now have to be happy about the point scored in Darmstadt. Because during the first half, we were the better team on the pitch, however, also not forceful enough though. But in the second half, we were neither. In total, it was a rather pale performance of the FCSP in which the actual strengths at transition moments and the playing in the centre couldn’t prove effective.

But we also end this match report with something positive: Because even without having controlled the match and without a lot of well-performed actions during the second half and despite being 0-2 behind in between, we collect a point in Darmstadt, the first one since Arie Hjelm. Again, the team was capable to show an unbelievable amount of morale and did not let themselves down despite being behind and the poorer team. So, in the end, the result was a 2-2. For the third time in the season. And even if the decisive goal was scored in the very last second of the match: A sure bet.