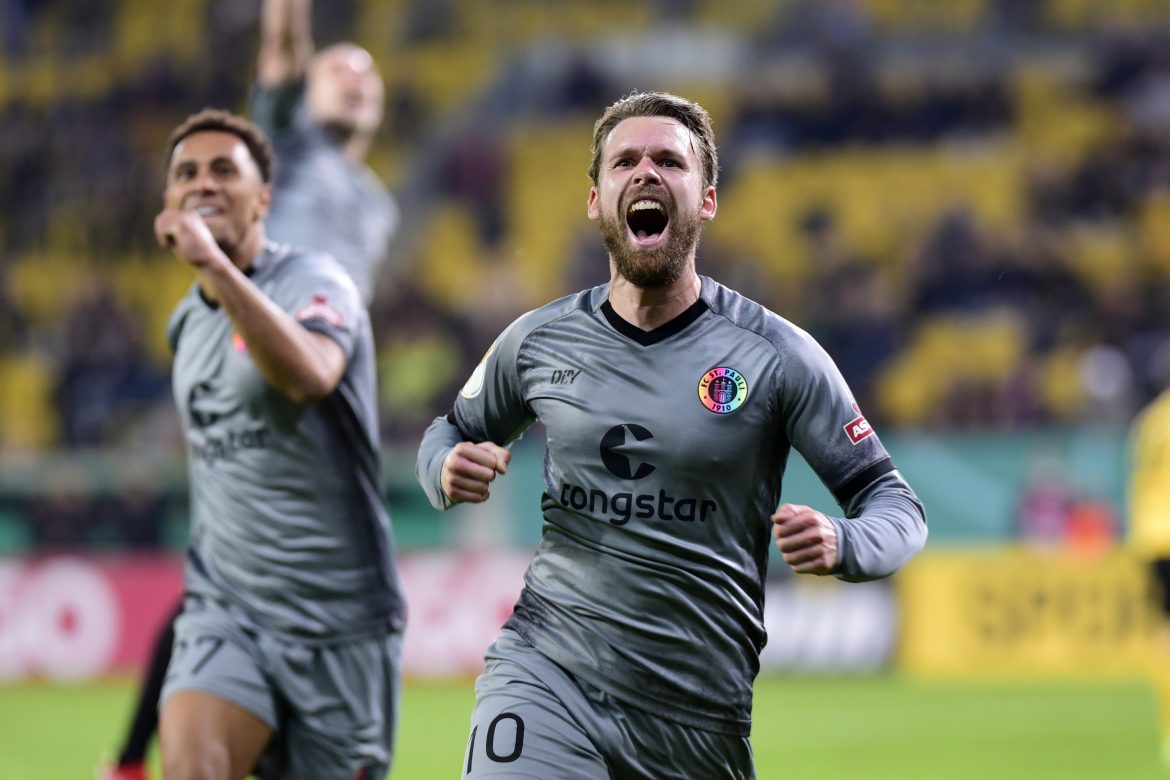 FC St. Pauli is in the third round of the DFB Cup! It was a hard, very hard piece of work. In contrast to the division, FC St. Pauli had some problems with their own game and never really got into it for the whole 120 minutes. So nothing else but a good old dirty work victory was needed. But when we play away in the Europa League next autumn in Lisbon, which is still sunny and warm, nobody will care how we got there anyway. Forza!
(Cover picture: Peter Böhmer)

Not surprisingly, the starting line-up of FC St. Pauli did not change. Only the goalkeeper was changed from Nikola Vasilj to Dennis Smarsch. The basic formation with the midfield diamond did not change either. However, there were slight changes in the positions, which I saw but did not understand (more on this later).

Dynamo Dresden made changes in several positions. For Yannick Stark, Christoph Daferner and Michael Sollbauer, Ransford-Yeboah Königsdörffer, Pascal Sohm and Luca Herrmann came into the game. I was particularly surprised that Stark and Daferner were not nominated. Both have been regulars so far and Daferner (as we saw in the second half) is the only real goal scorer in the squad. It smelled a bit like SGD coach Alexander Schmidt wanted to save important players for the game against Sandhausen at the weekend.
The basic formation was also changed: The last game against Schalke was played in a 3-4-3, and before that Dresden also seemed to have settled in with the midfield diamond. Against FC St. Pauli, however, it was a 4-2-2-2 (=four-man backfield, double six, two outside midfielders, two attackers).

In terms of real tactics, both clubs then did a lot, especially when FC St. Pauli had possession: Dynamo Dresden retreated to a 4-4-2. But not quite classically with two four-man backs. Because actually, it was only a 4-3-2. The missing tenth outfield player, Robin Becker, was always where Daniel-Kofi Kyereh was. And not in the way Kyereh himself likes to do with the opposing sixes, that they are closely guarded in the six-man area. No, Robin Becker really did follow Kyereh around the pitch at every turn. I haven’t seen anything like that in professional football for years. The man-to-man defence was just completely blunt. The basic formations, the necessary close spacing of the lines, the pressing procedures don’t really allow such a direct man-to-man defence across the pitch. Dynamo Dresden did it anyway and even had the desired success.

Robin Becker also had to make a few metres. Because FC St. Pauli had also thought about something in terms of real tactics: In possession of the ball, Maximilian Dittgen moved to the left and Kyereh to the right. Conversely, this meant that Becker was mostly on his own left defensive side. Only when Kyereh offered himself centrally, Becker did not have to leave his actual position.

But what was Daniel-Kofi Kyereh doing out there so far to the right? Why didn’t he stay in the ten-man area? Because that was usually occupied not by Kyereh, but by Guido Burgstaller. When he had possession of the ball in his own central defence, he always dropped into this space from the top, while Kyereh left it to the right-wing. I’ll be honest: I didn’t understand the idea behind it. Kyereh didn’t want to escape Becker’s close guarding, because this positional play was already visible at the very beginning of the game. And in the game in the division three weeks ago, I didn’t notice such a man-to-man defence either. So I conclude that there was an idea behind it that had nothing to do with man-to-man defence. Maybe Dresden had a disadvantage in terms of pace on the defensive flank, which they wanted to exploit. I don’t know.
It was also clear that when Marcel Hartel had possession of the ball, he kept moving into the six-man area next to Afeez Aremu and wanted to pick up the balls there, while Jackson Irvine interpreted his half position much more offensively.

Afterwards, of course, one is always wiser and I can now write here about what exactly didn’t work. Of course, I would have preferred to write about what a brilliant move it was. But no, it just didn’t work to pull Burgstaller into the ten-man area. Kyereh always moves very well in that area and can always bring a lot of movement into the opposing defence with his acceleration and dribbling. So: The plan with Burgstaller on the ten and Kyereh on the right-wing didn’t work out. But whether it would have worked better the other way round is also doubtful, because it was only part of an overarching problem.

Because FC St. Pauli actually had their share of trouble and hardship on the entire pitch. It became clear after just a few minutes that not everything was going to be as easy and relaxed on this Wednesday evening in Dresden as it had been recently in the division. This seemed to impress Afeez Aremu in particular. After the first two unsafe actions, he was quite out of sorts and there was no sign of the self-confidence that had been growing lately. This was also noticed by the Dresden players, who increasingly put him under pressure when he got the ball. An unfortunate game by Aremu, who was substituted at half-time.

But the fact that Aremu was able to make mistakes was also due to the fact that he had ball actions at all. This was not the case for every FC St. Pauli player. The entire FC St. Pauli offensive was more or less cut off from the defence in the first half. The team rarely managed to get into the final third in a controlled manner and had only itself to blame for that: An inaccurate pass here, a poor ball reception there, generally far too little movement and pace and not always perfectly distributed in space – there were many little things that ensured that FC St. Pauli never really found their game rhythm. As this was also true for Dynamo Dresden, the first half was quite a scramble. There were only five shots on goal in total in the first 45 minutes (three from FCSP) – none of them created any real danger.

Rico Benatelli came on for the second half. With him, the game changed. Because Benatelli has one quality that FCSP lacked in the first half: He. Always. Wants. To. Have. The. Ball!

It may be that he is not particularly strong in duel fights and not particularly fast. It may also be that he doesn’t play the most creative and always offensive passes. But he gets the ball off the defensive line, always moves to where he can help build the game. Whether in the six-man area as a link forward, between the centre-backs so they can push out and the wing-backs can push forward, or right/left-back as a Kroos-a-like playmaker: Rico Benatelli always wants the ball. A quality that is not always present in the rest of the squad in difficult game situations.

With Benatelli, FC St. Pauli was able to control the game a little better in the second half and gained a visual superiority and field advantages. The lead through Paqarada was not in the air, but it was certainly not completely undeserved. Even though I still wonder why the hell Leart Paqarada is at the penalty spot at this moment and not on his side: He is of course absolutely right standing there.

Well. Did I write something about Rico Benatelli’s ball security? Yes, I had already done that during the game and I was to bitterly regret it. Only a few minutes after taking the lead, Benatelli made a serious mistake in his own penalty area. Mörschel blocked Benatelli’s weak pass, the ball jumped to Löwe (who was offside – in the cup, however, VAR is only used from the round of 16 onwards). Löwe crossed to the second post to substitute Daferner – 1:1. Everything open again.

It remained eventful: less than five minutes after the equaliser, a free-kick cross from Paqarada sailed towards the first post. Maximilian Dittgen nodded the ball in (his second headed goal this season). After FCSP had already scored from a standard in the first round, they did the same in Dresden.
But that is not the only similarity to the game in the 1st round against Magdeburg. Again, only a few minutes after taking the lead, substitute Seo strode through the FCSP defence, passed out to Schröter (who was now playing on the right) on the right, so that he could slam the ball into the five-metre area. There stood Philipp Ziereis, who pushed the ball into his own goal with his shin. Phew. As in Magdeburg, FC St. Pauli had to accept another equaliser.

At the beginning of the second half, the game had become a bit more structured. But at the latest after the 2:2, it completely disintegrated into a “classic” cup match, which was less about formations and playing elements, nor about the current form or the standings, but much more about the fight. After all, FC St. Pauli showed that they can at least keep up in this category. However, neither team seemed to want to take any real risks. Nevertheless, both had great chances shortly before the end of the regular playing time. But neither Kade for Dresden nor Dźwigała could put the ball in the net. So it went into extra time.

By the time the whistle blew for extra time, I was already at the end of my tether. I always wonder how the players in such exciting duels can stand it. In any case, FC St. Pauli was now the better team. The best moment in this game was in the 101st minute: It was Jakov Medić’s pass from deep in his own half and with pressure from the opponent into the centre of midfield. With this pass, he outplayed a number of Dynamo players and suddenly FCSP had real space. The ball was then passed via Irvine to the left. Paqarada, Amenyido and Burgstaller played ping-pong in the penalty area before Buchtmann pushed it in for 3:2 – BOOM! Cup again, 3:2 again, finally in the last 16!

Things didn’t go particularly well for FC St. Pauli for the entire 120 minutes. Nevertheless, an unfamiliar procedure now lies ahead: A wintering in the DFB Cup. The draw will take place this Sunday. The round of sixteen will then take place in mid-January.

FC St. Pauli has already shown convincing play on several occasions this season. Against Heidenheim, the team showed that they can switch gears quite well. Now they showed that they are also capable of a “dirty work victory”. Even when things don’t go well, when the team doesn’t manage to give a game the necessary order and a lot of things don’t go right anyway (offside goal and own goal) – even then FC St. Pauli is able to win the game. It sounds really trite by now, but we’re all burnt children, so I’ll say it (again): We have lost games like this, which largely require a willingness to go beyond the limit, far too often in the past.

Now we are at the top of the table in the second division and in the last 16 of the DFB Cup for the first time in 16 years. Simply fantastic. Take a deep breath, enjoy it and then off to Bremen on Saturday!