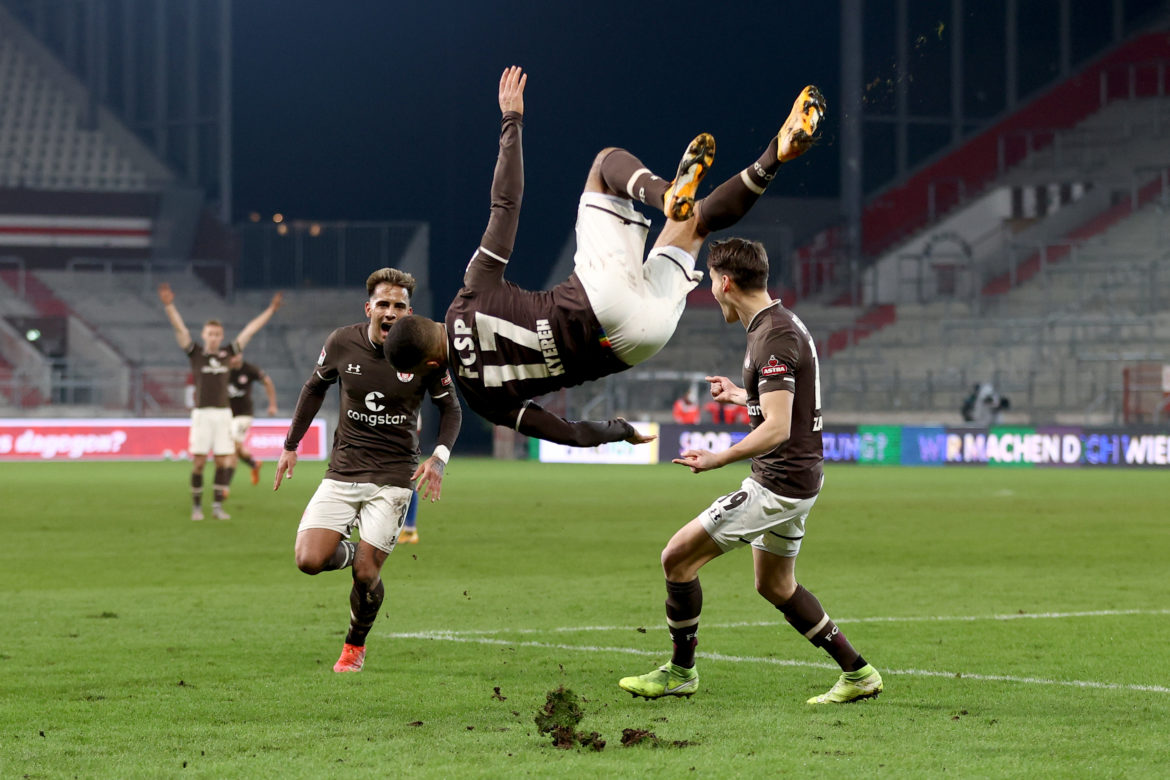 Once again, the FC St. Pauli became the winner of the derby and is thus tightening its standing as the town champion. In a firstly thrilling than tenacious and eventually intensive football match, a late but deserved goal contributed to a renewed confirmation: Hamburg is and remains brown-white!
(Cover picture: Christian Charisius-Pool/Getty Images/via OneFootball)

Already in the morning, the quarter dressed up appropriately. When the team-coach was then arriving at the stadium, it was welcomed duly (hopefully in a socially distanced manner) and the hells bells at the start were also supported loudly and brightly from outside the stadium (and as it was so beautiful, here’s a pic from inside). Match behind closed doors, anyhow, I was ready.

The last hour before the starting whistle couldn’t have started any worse. The announcement of the line-up in which Eric Smith was missing did certainly not just add worry lines to my face only. He simply acted too well and stable during the last couple of matches. Mantra-like I hammered the words of Timo Schultz into my head “I always have a good feeling whenever Rico Benatelli is on the pitch“ – His sense of feeling should not prove wrong for him.

On the other side, Hamburg SV started with the expected 4-3-3 and Vagnoman instead of Gyamerah as a right wing-back. In central midfield, it wasn’t the expected Aaron Hunt but David Kinsombi, who was granted to start.

The cross-bar before the south stand…

…did definitely prove to be brown-white already against Darmstadt  (and actually already against Bochum, when it played a one-two with Guido Burgstaller to score the 1-0). This time it was Kittel at first in the second minute and then Jung in the 21st minute who failed at this bar. No question, the starting phase rather belonged to HSV. The FC St. Pauli did have some serious problems getting into the duels.
The biggest problems were thereby faced by Philipp Ziereis, who was already booked early and after committing another foul he had to receive a serious warning-speech from Deniz Aytekin. And all this already in the 20th minute. What followed was the necessary substitution in the middle of the first half. Tore Reginiussen was substituted for Ziereis, and Guido Burgstaller took over the captain’s armband then.

But the two cross-bar hits can easily be named as the start and the end of the dominant phase of HSV. Because after that, the FCSP clearly took over and elicited a great number of shots on target. And basically in every chance Omar Marmoush, was at least somehow participating if he didn’t try to shot himself. It was an impressing first half of him which unfortunately wasn’t crowned with a goal.

In the second part of the first half, it became clear once again, why the FC St. Pauli is such a strong team for a few weeks now: A persistently, well-timed pressing behaviour of the team and after ball wins the same persistence in terms of vertical play which enforced 1-to-1 situations. And the gentlemen Kyereh, Marmoush and Zalazar were once again and especially during the first half in a really well play-mood. It was such a great pleasure being able to witness the ongoings on the pitch.

After its initial dominant phase, HSV did not show any further efforts which eventually turned to rather “completely nothing”. This was also due to the fact that the FCSP played their pressing very well. The pattern is known meanwhile: Daniel-Kofi Kyereh marks the opponent central defending midfielder man-to-man. The two forwards then block the central defenders and move even further when the pass to the wing-back is played. But the wing-backs aren’t directly attacked by the forwards but by the two half positions of the midfield diamond, Becker and Zalazar.

This pressing behaviour contributed to some headaches before the match. Because I was very worried about what would happen behind this line of pressing of the FCSP because I analysed an outnumbering of the HSV on the flanks based on the line-up.
And as expected, HSV tried to create this overweight on the flanks. Thereby, Kinsombi covered a position on the very flank while the second eight Dudziak was rather moving towards the front (my example is chosen for the built-up on the right flank which was almost every time aimed for by HSV. The left side was pretty orphaned – the same is true but mirrored for the FCSP.).
Kinsombi was then always straight attacked and guarded rather tightly by Leart Paqarada. And the actually behind Paqarada positioned Jatta could only seldom receive a pass, which was also due to the fact that the backline of four together with Benatelli moved very focused.

This built-up play of HSV was relatively well, no rather pretty well covered by the FCSP. It was remarkable, how uninspired and with a lack of ideas HSV was acting afterwards when it became clear that the own built-up did only cause little to no chances (the only danger they could create was through set-pieces). There was no change of formation and no attempts to built-up differently. Although the pressing behaviour of the FCSP, which I don’t want to blame at all, can be easily disturbed by changing to a formation with two forwards (Hanover did it well and clearly noticeable – also Nuremberg became stronger after their change of formation ). But HSV didn’t change. I didn’t get why (but I am not the one with the coaching licence).

Instead, HSV proved – and once again, I absolutely don’t want to criticise the pressing of the FCSP in any way – not pressing-resistent at all. FC St. Pauli, when they had found their basic order, were never really cracked in the entire game. This was somehow blatant and for a team that has the ambition to get promoted, they showed a play-wise really weak and poor performance (which was also due to the fact that the FCSP did it very, very, well).
I could highlight some more players now. Rico Benatelli and James Lawrence for example. And Sebastian Ohlsson. Or Tore Reginiussen. But whom should I leave out? I would celebrate them all. Everyone, feel hugged.

Scatter-brained – but in favour of the FCSP

Without any goals, the teams went into the half-time break. And while the first half showed a very thrilling match, every minute that was added in the second half the match got more scatter-brained.  This was also due to the fact that the FCSP did not play out their transitions moments well enough and the dribblings which were won during the first half got lost more and more.

In the 52nd minute, Ulreich insufficiently defended a centred ball from Ohlsson so that Zalazar could attempt a rebound but shortly after that he was taken down quite amateurishly by Gideon Jung. Aytekin whistled and pointed to the penalty point. As Jung was already booked, this would have meant a penalty and to get sent off. However, VAR interfered and Aytekin decided to withdraw his former decision. I personally would have given the penalty, simply due to the clumsiness of Jung, however, eventually, the decision was somehow right.
(Note of Maik: Since tweet 5 in the linked tweet-chain even Collinas Erben cut back on that a little. But incisive for the decision is whether one marks the “get hit” of Jung as a “played the ball”. To be honest, even without being biased, I would clearly decide for a penalty here. Jumping with two soles towards the opponent usually doesn’t save you, even if you get hit with the ball at the same moment. The thing in the midfield, however, withdraws his decision and shows a yellow card with a huge warning. If Aytekin would not have decided on a penalty, the VAR might have shortly cleared their throat but the decision would have lasted. But why Aytekin decided to re-watch the situation is unclear to me, even with the explanation provided by Collinas Erben. Long story short: Doesn’t matter, derby winners!)

Following on that, both teams appeared being in need to pay some toll to the high speed of the first half. Offensive-wise, HSV remained not dangerous or if they developed some danger, it was rather through set-pieces. Also, the FC St. Pauli decided to slow down a little bit and could no longer develop the full speed at the very front which caused some real danger there in the first half.

Shortly before the match was over and when I started to adapt to a draw, the FCSP changed their formation to a 3-5-2 when Zander was substituted for Becker. And Zander’s first action became incisive for the match: The whole situation was triggered by the consistent and never-tired horse lung  Rodrigo Zalazar, who regained his speed just when the match totally turned scatter-brained and lost its speed. With dribbling, he left two opponents behind and discovered endless green in front of himself. He then centred an actually too far ball to the right flank where Zander then passed the ball with his first contact to the rear room. And this rear room was completely orphaned (which was created with the slightly too deep ball of Zalazar), only Kyereh was able to reach the ball after some very few steps. And how! With felt 1910 km/h, Kofi shot the ball into the right short upper angle.
Dude, what a goal!

There was no recovery of HSV after that, only a red card was awarded to Tim Leibold who absolutely unnecessarily kicked Guido Burgstaller. The FC St. Pauli kept the lead to the end and is thus allowed to call themselves town champions once again. And based on the course of the match, this is absolutely deserved.

By becoming town champions again, several series were prolonged:
– The working title of the match-report, which we always formulate before the match of a town championship and then publish caused for the fourth time already that the FCSP could defend the title of being town champions. At least, we imagine that this working-title is causing success.
– The again-and-again praised “Don’t score the incisive goal too early” did eventually become part of the FCSP-DNA.
– “No goal conceded after a corner ball“ alike (and finally with zero goals conceded at all!)
– And of course, there’s is Guido Burgstaller, who I blame from time to time for not being able to achieve certain things, which -at least in my imagination- lets him show such performances then. I blamed him for not being able to score a beautiful goal (which he then did against Nuremberg). I blamed him for not being able to score twice in a match. (which he then did against Darmstadt). And I now blamed him for not being able to become town champion (which he is now) What else, Guido?! To score three times against KSC? To win all matches until the end of the season? Achieve 12 more points to reach the play-off rank? What else, Guido?!

For now, I am fine with: Keep on moving to the fore and simply be happy!

Note of Tim: “Simply be happy” is a good description of my current situation. During the course of this week, we will grow to a five-headed family (so we’ll leave the number of 4 generously to the HSV). I couldn’t be happier than I currently am.
And this also means that I am taking some time off (which is conveniently happening at the same time as the international break, I planned that wisely before…). Enjoy the upcoming weeks as derby winners!

21 thoughts on “Over and over: Derbysieger!”