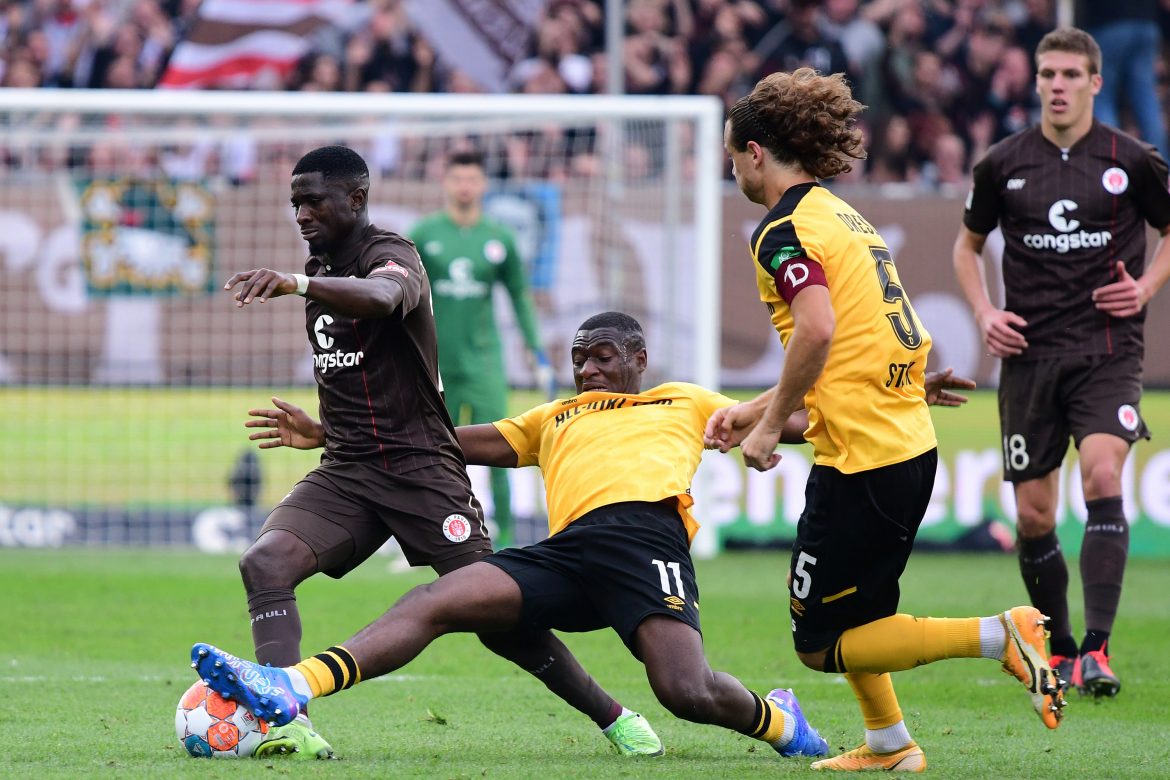 Sure, when things are going well in sporting terms, articles about how well individual players are piling up everywhere. This is one such article. However, it also shows what still needs to be improved and, more importantly, it highlights a player who took a long time and had a hard time and is now performing almost unimagined.
(Cover picture: Peter Böhmer)

“Afeez who?” – I would like to claim that I know a little about European club football, but when the rumour surfaced in the summer of 2020 that Afeez Aremu was about to sign for FC St. Pauli, I heard the name for the first time. A short time later, however, we had established contact with Emil, who answered our questions for Aremu’s player profile. The one sentence about Aremu that has stayed with me from that interview to this day: “Aremu is the one where the opponents’ attacks end (…)” – just how right Emil was about that became clear from time to time last season. In recent weeks, however, it has become clear that Afeez Aremu is probably the best player in the division in this category.

The best defensive six in the division

Because Afeez Aremu is indeed often something like the final link in the opponents’ attacking efforts. League-wide, no player (not even a centre-back!) has more successful defensive actions per game than Aremu. This is partly due to his strong tackling rate of more than 70% on the ground (but considerably less in the air). But it is much more Aremu’s ability to anticipate. With his good positional play, Aremu often intercepts opponents’ passes. Very often. More often than any other player in the 2nd Bundesliga. 8.5 passes per game. If you count that against the share of possession, Aremu intercepts more than 12 passes per game. A ludicrously high number. Jonas Meffert of HSV is in second place in this statistic. With less than 10 intercepted passes per game.

Afeez Aremu’s style of play is rather inconspicuous. This is probably also due to the fact that he does not seem quite as dynamic in his actions on the pitch, and perhaps he is not. Only rarely you do see Aremu dashing around the pitch at full sprint. In a way, that is not necessary because he can anticipate well. But it is precisely this image of him on the pitch that is likely to be a problem if he is not able to perform as well as he is doing at the moment. One cannot help but accuse Aremu of a certain lethargy in his actions. But that is probably not the case at all, it is simply his style of play that makes him so strong elsewhere. In any case, what has clearly decreased are the small lacks of concentration in possession, so that there have been no serious ball losses by Aremu lately.

(Update: I thought about this paragraph for a while longer (yes, I know I should have done that before) and would like to add something:

Afeez Aremu is enormously strong not because of but in spite of this rather undynamic style of play. I think he can do even better if he were to improve his physical skills. This shows what a tremendous talent Afeez Aremu is and what is still possible if he improves in this area).

Against 1. FC Heidenheim and also in the dominant games before, you could see for the first time how Afeez Aremu also has more confidence offensively. This is certainly the next step he has to take in his development to become an indispensable pillar in the FC St. Pauli game. Because offensively he still has a lot of room for improvement. His forward passes are often inaccurate or have the wrong tempo. And again we come back to Emil, who after his signing also described exactly that as his problem area: “But he still has to work on precision and his decisions in possession in general” – Yes, he has to.

Incidentally, Aremu himself sees it the same way, as he revealed in a press briefing at the beginning of September. And the current development shows that he does too. In the penultimate game against Dresden, he played his most passes in a game up to that point. Against Heidenheim, it was even more. He also received more passes from his teammates than ever before. Especially the comparison with his first starting games this season against Ingolstadt and Regensburg illustrates this development: In these two games, he led a total of 10 offensive duels. Against Heidenheim alone, there were 13.

A foreseeable development? Honestly, no, I didn’t see that coming. But Timo Schultz did. And he also gave reasons why this development is only coming now. In the fourth episode of “Being Timo Schultz”, he detailed Afeez Aremu’s situation in the pre-season. He describes him as a “quiet, introverted guy”, who joined FCSP late in the pre-season and also had a language barrier to overcome. This led to him having “extreme fluctuations” in training and in the game in the first few months and not being able to maintain the level of his teammates. And since consistency is particularly important in the six-man position, the first half of the 20/21 season was one to forget for Aremu (and, as we know, for the rest of the team as well).

In the podcast, Timo Schultz also highlighted Aremu’s development in the second half of the season. He did not have any data at hand but suspected that Aremu has the most ball conquests and leads the most duels. As we can see from the radar graph above, that is the case. It is exactly these skills that Timo Schultz values in Aremu. He calls it a “weapon” and emphasises that “there are few players today who have such a weapon against the ball”. Accordingly, Timo Schultz is not surprised by the current development. On the contrary, he already said in the podcast that he expects Aremu (together with Lukas Daschner, who is unfortunately injured) to “become important factors in the new season” for FC St. Pauli. That is now undoubtedly the case.

What will happen when Eric Smith is fit again?

Eric Smith is expected to return to full team training this week. Smith was for me, and I’m sure for many others, the undisputed regular at the six position before the season. His few games from pre-season were just so promising.
However, Afeez Aremu is currently shaking up this ranking. For it is certain that his defensive strengths are good for FC St. Pauli’s free-flowing offensive play and will probably bring some balance to this game. Where previously, after losing the ball, nasty counterattacks were launched, Aremu now cleverly opens up those spaces in the back defence. Smith has done the same in his games. But the statistics show that Aremu is probably more comfortable with these defensive tasks.

It will be a real challenge for Timo Schultz to decide which player will play the sixth position. Both Smith and Aremu have enormous qualities, and Smith’s offensive approaches are somewhat more pronounced. However, FC St. Pauli has won all five games in which Aremu has played the full season (16:4 goals). Advantage Afeez!

4 thoughts on “The boss: Afeez Aremu”